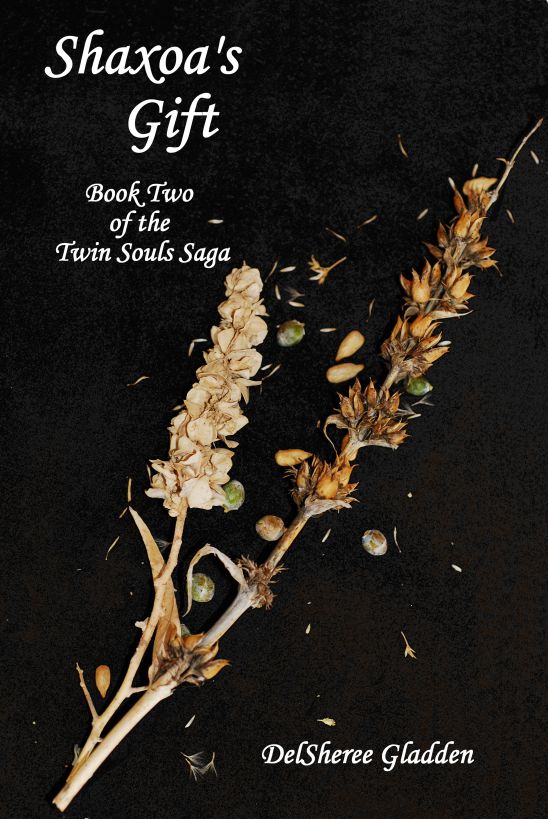 This ebook is licensed for your personal enjoyment
only. This ebook may not be re-sold or given away to other people.
If you would like to share this book with another person, please
purchase an additional copy for each recipient. If you’re reading
this book and did not purchase it, or it was not purchased for your
use only, then please return to Smashwords.com and purchase your
own copy. Thank you for respecting the hard work of this
author.

Book One of the Twin Souls Saga

Book One of the Destroyer Trilogy

For Abbey, who helped me pick out the “weeds” for the
front cover

The slight touch seemed to freeze time. I saw
Kaya’s face slowly stiffen, her eyes lose their usual gleam and
turn dull. The sensation lasted only a second before I could
breathe again, but I knew something was wrong. Kaya’s body went
limp. I caught her just before she collapsed.

“Uriah,” Kaya whispered. She blinked several
times before bolting up out of the chair. Her sister was quick to
push her back down. “Uriah! I saw something. I saw it when I
touched your arm.” Her hands were shaking.

“What? What did you see?” My mind raced.

“He’s about to take her,” Kaya said. Tears
were cascading down her dark cheeks.

“No, your Twin Soul. He almost has her.”

“No.” The single word came out as a gasp.
This was the first choice. I was being asked to choose between
saving Claire and saving my Twin Soul. Making the wrong choice
would bring me a life of pain. But which one? I was so close to
rescuing Claire. When I spoke to her on the phone, she tried to
keep her voice steady, but I could hear the pain and fear behind
her words. If I left her to fight alone much longer, she would
lose. We would both lose.

I opened my mouth to tell Kaya that I would
not change my mind, but no words came out. Paralyzing fear suddenly
gripped my body. My heart stopped. My lungs refused to expand and
my legs lost all strength. Without warning, I was on the floor, my
entire body throbbing in pain. I saw her face. Pale white skin,
wispy auburn hair, bright green eyes filled with tears and terror.
The Matwau, bearing a face I had never seen before, cackled in
maniacal glee.

The coyotes were still circling below. Rage
boiled in the creature, making it difficult for him to maintain his
human form. He was miles away from the house, but he could still
see it clearly. It had been a long time since he failed to capture
his prey, half a century since the last time one had escaped his
grasp. His hands tightened in fury as he remembered that narrow
miss and its connection to the horrible little town he watched. He
could do nothing about that, or his more recent loss. His failure
to capture Daniel was not what had him so angry.

Once again, Uriah was the sole source of his
foul mood. He would forget Daniel since the Twin Soul bond had
already formed, but not Uriah. Since the moment he was created, the
Matwau had been waiting for this young man to cross his path. There
should have been an equal amount of fear in him along with his
rage, but his fear had been buried so deep that he could no longer
register it.

Uriah was a child who did not even know who
he was. The Matwau knew, and he was ready. The boy had not been
prepared as he would have expected. The old woman had failed Uriah
miserably by keeping her secrets from him, but the Matwau would not
hold that against her. Her weakness only improved the creature’s
chance at success. The boy stood no chance.

Old wounds gnawed at his confidence,
reminding him of what had almost happened when he had challenge the
boy the day before. He laughed that thought away. It was a
mirthless laugh, though. The fight had been filled with too many
distractions. Uriah had been lucky, nothing more. The next time
they met, there would be no one to interfere. He would make sure of
that. The Matwau would not challenge Uriah again until the stage
was set to his liking, and he knew exactly how to accomplish
that.

Remembering how he had put his hand on
Uriah’s shoulder when they first met, he wondered what had caused
the searing fire. Uriah had not fallen under his spell as everyone
else always did, but instead recoiled from the pain his touch had
caused. It was an oddity, but not one that was important to the
Matwau. It was nowhere near as significant as what the Matwau had
gained from the physical contact with Uriah.

That brief moment had laid his new plans.
Turning away from the tiny desert town, he smiled despite the
turmoil raging under his skin. He knew it was time to start
gathering his allies. They would be needed if his plans were to be
fulfilled. Silently, he made the call. No other creature but his
tainted allies could hear the call, but it was one they could not
refuse.

He found a secluded spot to wait. He hated
waiting. His eyes closed, though not to sleep. Going over his
plans, he perfected them until there were no flaws. Faint sounds of
the ones he called registered in his ears, letting him know he was
no longer alone. The Matwau did not respond. He would not
acknowledge any of them until the last had reached the meeting.

A hesitant shuffling some time later brought
one of his allies as near the Matwau as the beast would dare come.
It pawed the dusty ground before finally speaking. “The last one
just arrived, master.”

The Matwau raised his eyelids languidly. The
creature’s matted grey fur quivered as its large, deformed wolf
head dipped down in uneasy respect. The sniveling animal stood
waiting for a response. A sharp nod was all it received. Backing
away on trembling legs, it scurried out from under its master’s
gaze. The Matwau sneered at the creature. He hated it. He hated all
of them. They were weak, mindless animals, but he needed them.

Uriah knew almost nothing about what was
happening, but that had not mattered in the end. His natural
abilities alone had proven too much for the Matwau to handle. His
failures had brought his allies to him. His allies’ failure in the
past had them groveling at his feet. Failure would not happen
again.

Walking through the desert sand, he
approached the gathering. Twelve misshapen, dangerous animals stood
waiting for him. He was their master. They would do anything he
asked them to do. They hated him for that exact reason. None of
them wanted to work with him, but they could not refuse. The gods
were divided in their allegiances, but they all believed in keeping
things fair. It made the game more interesting.

The Matwau did not believe in fairness.

“I hope you all remember what happened the
last time we were forced to work together,” the Matwau said. His
voice was cool and even, but the words cut straight to their
wounded pride. Snarls and whimpers erupted from the group. The
snarling creatures remembered, and wished in vain that they could
repay the Matwau for the penance he had made them suffer for their
failure. The whimpering ones remembered as well, and would do
anything to avoid a similar end.

Three centuries earlier, the Matwau had been
faced with an important hunt and very little time. He knew the
young warrior was an important man. One of his many abilities was
sensing danger to his creators’ plans. The young warrior would have
played a vital part in preventing a series of detrimental events to
his tribe. Knowing he had so little time, the Matwau had
immediately called on his reluctant allies.

At first the hunt had gone well. His allies
tracked down the young man quickly, but that was where their
usefulness had ended. They had been ordered to corner the young
man, and hold him until the Matwau could come and claim his victim.
Several of the strongest were tempted by the young warrior’s
importance. Together, they decided to take the victim for
themselves, thinking that they could replace the Matwau.

They attacked the warrior, not realizing that
they had no hope of defeating the young man. The Matwau had ordered
them not to kill him. No matter how hard the three wanted to, they
could not bring themselves to break the Matwau’s order. The warrior
had beaten them back easily. Throwing down the last of the beasts,
the warrior attempted to make his escape. The Matwau arrived in
time to see his prey running into a dense forest. He left the
damaged creatures behind. Tearing his way through the forest, he
closed the gap between him and his prey in a matter of seconds. The
end of the hunt came quickly.

Calmly, he walked back to the valley where he
had left the traitors. By that time, the others, the ones who had
stood by and watched the three disobey his orders, were gathered
around the fallen. Beginning with the weakest, he took each of his
so called allies and used every one of his powers to instill his
anger at their betrayal. Their screams filled the valley, only
pausing long enough for the Matwau to discard one and reach for
another.

He left twelve, the twelve who had not
participated in the actual betrayal, with enough life left in them
that they would heal, and be much more useful to him in the future.
The remaining three screamed and howled the loudest and the
longest, only ceasing when their disfigured bodies were drained
completely. They were left to rot on the forest floor.

As he relived the memory, so did the group
gathered around him. They cringed and huddled together in fear at
the reminder.

“Good,” the Matwau said, “you do remember.”
He walked back and forth before the creatures. “This time will be
much different. There will be no mistakes. Each of you will do
exactly what I tell you to do and nothing more. You will not even
think unless I tell you to do so. Do we understand each other?”

“Very good, because if one of you deviates
from my instructions, even in the slightest degree, last time will
seem like a pleasant memory.” The snarls and whimpering erupted
again. The Matwau smiled, his lips curling viciously as he imagined
the pain he could cause them. Finally, the group quieted, and one
stepped forward.

“What are your orders?” he asked.

None of the creatures had names, but the
Matwau knew each of them individually. This one was the strongest
of the group. Of the remaining twelve, he tried the hardest to defy
the Matwau’s authority, but he was also the best hunter. “Find my
prey,” the Matwau said.

Cathy Hopkins - [Mates, Dates 01] by Mates, Dates, Inflatable Bras (Html)
The Relationship Coach by Sylvia McDaniel
The Sapphire Express by J. Max Cromwell
Sweet Lass of Richmond Hill: (Georgian Series) by Jean Plaidy
Must Love Dogs: New Leash on Life by Cook, Claire
With His Protection (For His Pleasure, Book 15) by Favor, Kelly
Bearing It All (Grizzly Affairs Book 1) by Magenta Phoenix
The Hammer of Fire by Tom Liberman
After the Wreck, I Picked Myself Up, Spread My Wings, and Flew Away by Joyce Carol Oates
Crown of the Cowibbean by Mike Litwin