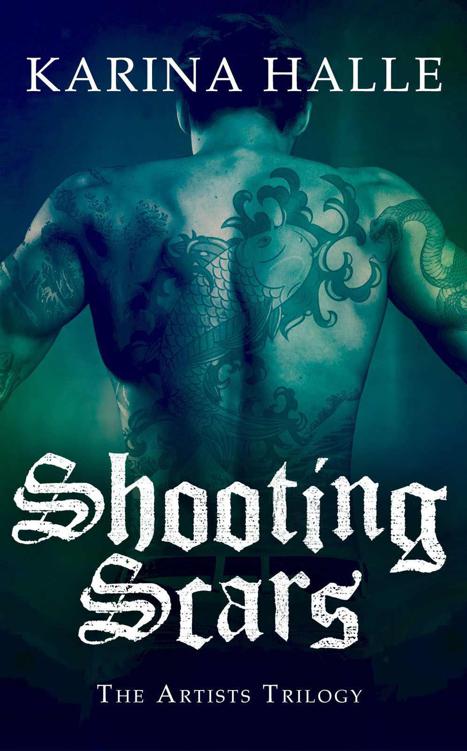 The right of Karina Halle to be identified as the Author of the Work has been asserted by her in accordance with the Copyright, Designs and Patents Act 1988.

First published in this Ebook edition in 2013 by HEADLINE ETERNAL

An imprint of HEADLINE PUBLISHING GROUP

Find out more about Headline Eternal

The daughter of a Norwegian Viking and a Finnish Moomin, Karina Halle grew up in Vancouver, Canada with trolls and eternal darkness on the brain. This soon turned into a love of all things that go bump in the night and a rather sadistic appreciation for freaking people out. Like many of the flawed characters she writes about, Karina never knew where to find herself and has dabbled in acting, make-up artistry, film production, screenwriting, photography, travel writing and music journalism. She eventually found herself in the pages of the very novels she wrote (if only she had looked there to begin with).

Karina holds a screenwriting degree from Vancouver Film School and a Bachelor of Journalism from TRU. Her travel writing, music reviews/interviews and photography has appeared in publications such as
Consequence of Sound
,
Mxdwn
and
Go Nomad
Travel Guides. She currently lives on an island off the coast of British Columbia with her fiancé and her rescue pup, preparing for the zombie apocalypse.

Also by Karina Halle and published by Headline Eternal

Sometimes the right choice can be the deadliest.

When Ellie Watt made the ultimate sacrifice for Camden McQueen, she never thought it would be easy. But walking away with her ex-lover, Javier Bernal, in order to ensure Camden’s safety, has brought a whole new set of dangers. With Javier’s plans for Ellie growing more secretive by the moment, Ellie must find a way to stay ahead of the game before her past swallows her whole.

Meanwhile, Camden’s new life is short-lived. Fueled by revenge and pursued by authorities, he teams up with an unlikely partner in order to save Ellie. But as Camden toes the line between love and retribution, he realizes that in order to get back the woman he loves, he may have to lose himself in the process. He might just turn into the very man he’s hunting …

I
knew once I’d finished
Sins & Needles
that following it up with an equally good sequel wasn’t going to be an easy task. Expectations were high, deadlines were looming and I had three volatile characters who were dying to take me on a wild and emotional journey. But, powered by energy drinks and
The Bourne Trilogy
soundtracks,
Shooting Scars
was completed and I couldn’t have done it without the following people: my wonderfully supportive parents; my hardworking and honest team of beta readers (Megan Simpson, Megan Ward O’Connell, Emily Franke, Claribel Contreras, Barbie Bohrman, Nina Decker, Brenna Weidner, Stephanie Brown, Taryn Celluci, Jamie Hall, Kayla Veres, Rebecca Espinoza, Shawna Vitale, Amanda Polito, Lucia Valov
č
íková, Natasha Tomic); EVERYONE at Halle’s Harlots; the badass fight clubber’s Madeline Sheehan, E.L. Montes, Gail McHugh, Cindy Brown, Trevlyn Tuitt and S.L. Jennings for their tireless patience with me; the talented Najla Qamber; Maryse Black; Kara Malinczak; my cool, calm, collected agent Scott Waxman; Samantha Howard; Farley Chase; my editor Latoya Smith for her passion and clarity; the whole team at Grand Central Publishing for taking a chance on me; Kelly St-Laurent for her encouragement and, last but not least, Scott MacKenzie for being there for me every single step of the way – I can’t wait to marry you.

“Y
ou wanted me to catch you, didn’t you?” Javier’s voice cut into my thoughts like a drill. I blinked at the dry, rough desert of Arizona as it flew past my window, trying to remember what was happening. This wasn’t a dream, this wasn’t a scenario; this was real. I was in the back of an SUV driven by a thuggish man and the ex-boyfriend of my nightmares was right beside me. I had given Camden a second chance at life, at love, at everything by taking a step backward with mine. I was Javier’s prisoner now, his six years of chasing after me having finally come to a close.

I was trapped with a man who would either love me or kill me. There was no middle ground with Javier Bernal.

“Didn’t you?” he repeated. I caught him wave his hand dismissively out of the corner of my eye, his watch catching the sun that streamed in through the tinted windows. “Oh, it doesn’t matter. I know.”

I didn’t want to take the bait. I wanted to keep looking out the window, pretending this didn’t exist. I wanted to ignore the anger that started to prick at my toes, rising up my limbs, and the disgust and defeat that was about to sink in my chest.

He had found me.

“You tracked my cell phone,” I said, my tongue sticking to the roof of my dry mouth.

He chuckled. The hair on my arms stood up.

I both wanted to laugh derisively at the way he pronounced Jason and sneer at the use of my old pet name, Angel. I was Angel six years ago. That angel had died on broken wings and with a broken heart.

He continued, “I can’t track your phone unless I have physical access to it.”

“Then you were tracking the car,” I said, still to the window.

Another chilling laugh. “Tracking that car all this time? I had people looking out for it – you took quite a big chance driving around in a flashing ‘find me’ sign. But no, there was no tracking device in the car. Why would I plant one in my own car?”

His voice lowered over that last phrase, twisting in a curiously compassionate way. I brought my eyes over to look at him and immediately regretted it. I realized that up until that moment, I’d been trying to see through him like he was a hologram.

Javier’s hair was longer now, but just as thick and dark. His face had thinned out a bit over the years and his build was somehow wider, stronger. He looked like a citron-eyed lion in a white linen suit, a creature that felt larger than the sum of his parts. The more I stared at him, the more the space around me became smaller.

He smiled at me, his eyes glinting. It wasn’t a kind smile and I quickly cast my eyes downward, feeling that the less eye contact we made, the better it was for me. I caught a glimpse of his
Wish
tattoo on his wrist, partially covered up by his watch.

“Ellie Watt,” he said smoothly. “It didn’t take me long to figure out your real name. In fact, it was almost like your name came floating in my window one day. So, you must realize that when you’re on the run and using your real name, well, any fucking idiot can track you down.”

I blinked hard and ripped my head to the window again. I’d been so careful with Camden’s name, going through all the steps to make sure he could never be found as Connor Malloy. I barely did the same for myself. The minute we knew that Javier and his men were after me in Palm Valley, the minute we headed for Nevada, I should have been more careful, more cautious. I should have concentrated more on myself than on Camden. Javier had tracked me to the resort in Laughlin and after that I thought I was playing it smart by taking on an old persona.

“I had people waiting in Las Vegas, you know,” he said and I could sense him examining his fingernails. “It wasn’t hard to figure out that’s where you’d be going next, that you needed to keep laundering your money. You were cocky enough to stay on the Strip. One of my men saw your car –
my
car – driving through. Followed you to your hotel, where you went through a half-hearted attempt to hide it.”

I swallowed hard. Disgust was beating out defeat at the moment.

“I realize now, Angel, that I didn’t know you very well at all. I don’t know who I knew. But I do know you’re not an idiot. You wanted me to find you. Perhaps you’ve been asking for it since you ran away.”

“Where are we going?” I said, trying to keep my breath from shaking.

“I have many pasts. Pick one.”

He leaned back in his seat, his legs splayed open, the tip of his knee touching my leg for a brief second. Just a tap. His way of reminding me where I was. I eyed the rocky landscape flying past and wondered when it became too reckless to jump out of a moving vehicle.

“Child safety locks,” he whispered and I wished he’d get the fuck out of my head. “And
our
past. Do you remember it?”

“No.” Although it wasn’t that much of a lie. I’d had so many pasts, that it was easy to bury them all with each other. When I left Javier all those years ago, I only remembered the pain he brought me, the humiliation and deceit for as long as I needed to. For as long as I needed to become someone else, to never make the same mistakes again. Then I let it go.