Shot Through The Heart (Supernature Book 1) 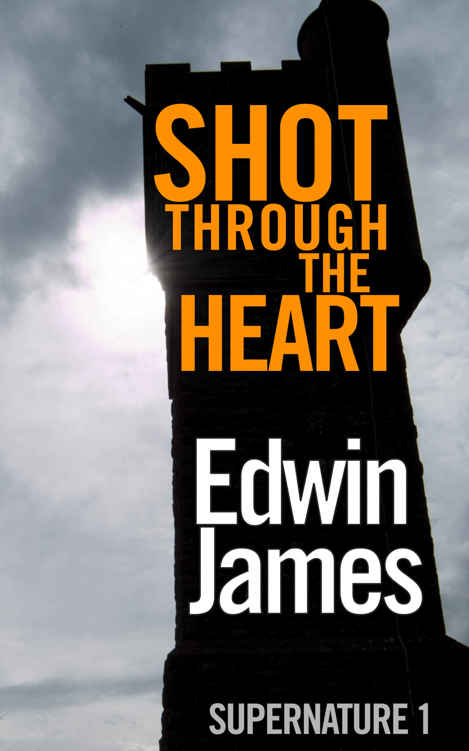 GHOST IN THE MACHINE

OTHER BOOKS BY ED JAMES

1
GHOST IN THE MACHINE

2
DEVIL IN THE DETAIL

3
FIRE IN THE BLOOD

4
DYED IN THE WOOL

1
SHOT THROUGH THE HEART

Little brother, I hope you enjoy this.

Strolling along the ancient farm path, the loch to her right was bathed in moonlight as the midsummer sun began slipping behind the mountains. She got her mobile out to check the time - just after midnight. She'd be back in her hotel room by half past at the latest.

She was surprised to feel happy as she savoured the embers of a fun evening. Smiling, she thought back to the meal, her mouth watering as she remembered the tender lamb cutlets, perfectly prepared.

Walking slowly, hoping to defer her return to the real world and work, she breathed in the smells of the countryside, wild garlic mixing with the tang of damp moss. She'd possibly regret her late night in the morning, but that was then, not now.

A howl came from behind her.

She'd read that they'd started reintroducing wolves into the Highlands, following the success with sea eagles. The land was creeping back to its pre-human times, and it pleased her to think that it was another step on the way.

She heard another howl, this time much closer. A few answering calls came from the field to her left. She couldn't tell how far away they were. Quickening her pace to match her pulse, she stumbled in a pot hole she hadn't spotted.

A howl emanated from right in front of her.

She stopped dead, unable to see anything, and waited, swallowing hard. Nerves jangling, she focused on blocking out the distant car noise, listening only for the movement of wolves. She didn't know if they would kill someone but she didn't want to put it to the test.

Three more howls rang out from in front, much closer this time. She caught sight of a wolf appearing through the hedgerow, brazen with its attitude, its fur an unusual shade of bright orange, almost like a fox but much larger.

Turning back towards the island, she started to run. Glancing behind her, heart pounding, she saw the wolf trotting slowly, keeping a distance. Hurrying, she was intent on increasing the gap between them. She was covering the ground she had sauntered down in mere seconds, berating herself for not being quicker getting back to the hotel - maybe she would have avoided the wolves.

Breathing a sigh of relief, she closed in on the gatehouse that sat across the small expanse of water leading to the island. She quickened her pace as she approached the edge. She stopped dead and climbed down the ladder onto the flagstones, now submerged. The ford through the loch had been just about passable when she left.

Launching herself forward, the water soaked her jeans up to her thighs, making her progress slow. She slipped and caught her knee as she landed, sending her sprawling under the water. She struggled up and started wading through, continually looking behind at the pair of green eyes looming over the edge. They were keeping a watching brief. She climbed up the steps at the far side.

Through the pain, desperately trying to catch her breath, she told herself she'd made it.

Looking up, her heart sank as she noticed that there were no lights on in the castle.

And then she saw a wolf approaching from the castle gates, flanked by another two.

She could only stand and watch as they slowly changed shape - the canine forms gradually stretching and contorting until three human beings replaced them, each with sharp talons emerging from the ends of their fingers.

Mark Campbell sat in the bay window of his flat in Bruntsfield, Edinburgh, and waited. The mid-June lunchtime sun shone through the window, sending a box of light along the stripped wood floors of the living room. His daughter, Beth, sat on his lap, cooing in her baby gargle.

He was waiting for his wife to return with coffee - he desperately needed to get down the road to the National Library of Scotland to close out the research phase on his new book. Much as he loved Daddy time, he didn't want to start resenting it.

He picked Beth up as he got to his feet. He strapped her into her baby chair, fastening every strap that he could, careful not to tighten them too much, but worrying they weren't tight enough. He spooned baby food into Beth's mouth, but his daughter seemed more intent on covering her face with it than eating it. He put the bowl of mush on the table and sat back down, tired.

He felt a surge of pressure on his shoulders. He was currently the sole breadwinner, but he was a writer who earned next to nothing and he was behind with his latest book. A flat in Bruntsfield was not cheap. His advance had allowed Sarah to take a longer maternity leave than planned, which had been good for her and Beth, but he needed another. He had loose ideas and informal offers for the next book - the ideas infiltrated his head as he tried to close this one out, at times making him feel the notes for book three were longer than the text that he'd written for book two.

He heard the flat door open.

Sarah burst through the living room door, grinning. She held a coffee carton in one hand but her eyes were focused on Beth. "How's my baby girl?" she asked, talking in baby speak.

Beth cooed at her mother, raising up her small arms.

"I got you a coffee," muttered Sarah, putting the carton down on the table next to him. She unfastened the straps and picked Beth up. She sat down next to Mark on the sofa, resting as much of the baby on her lap as didn't wriggle off to either side. "Who's a big girl?" she asked. "Daddy been feeding you?"

"I wouldn't say that I've exactly managed to feed her," said Mark, "unless she's got an ability to take food in through her skin."

"Not this again," muttered Mark. He took a sip of coffee through the lid. "How was Katie?" he asked, trying to deflect the looming argument. Every Tuesday, Sarah met Katie for coffee to catch up on office gossip.

Sarah glanced over at Mark, then back at the baby. "Katie's fine," she said. "She's just had her scan." She held up her mobile phone, pointing at the blurry and indistinct photo that was supposed to show a foetus. "It's cute already."

"Great," said Mark. He tried to show genuine enthusiasm - Sarah's postnatal depression was cutting their relationship to the bone and it seemed to be stretching out due to chronic lack of sleep.

"I might have known," said Sarah. "You barely cared about your own daughter's scan."

"That's harsh," said Mark. "I'm under a lot of pressure because of this book."

"The bloody book," said Sarah. "How long has it been now? Eighteen months?"

Mark bit his tongue. "It doesn't write itself," he said.

"You're always writing," said Sarah. "I'm stuck here with this monster and you're lost in your own little world."

"Yeah, if our lives were an American fifties sitcom," said Sarah. "This is real life. You need to be a father."

Mark closed his eyes and shook his head. "She's not much of a monster, is she?" he asked.

"I thought you said it was an allergy?" asked Mark. "Isn't that what Dr Google said?"

Sarah looked away. "I was going to take her to the doctor this week," she said. "You could help, you know."

"She wakes me up as well," said Mark.

"You could actually bother yourself to get up, then," said Sarah.

Mark was about to seriously lose it when his mobile rang. He picked it up from the table, catching Sarah's withering look as he answered it.

"Hello, this is Lady Elizabeth Ruthven," came the voice from the other end of the line, the cut-glass accent pure Scottish aristocracy. "To whom am I speaking?"

"Oh, I see," said Elizabeth. "I was given this number by your researcher, Ms Kay McGregor."

Mark sat forward. "Has something happened?" he asked.

"Well, I was hoping you could tell me," said Elizabeth. "She was supposed to turn up yesterday for a meeting but didn't materialise."

"Right," said Mark, trying to think on his feet. "I'll need to call you back."

He jotted down a number with an area code he didn't recognise. After ending the call, he tried Kay's mobile - straight to voicemail. He chucked the phone on the table.

"Who was that?" asked Sarah.

Mark gave a deep sigh. "It was Lady Elizabeth Ruthven," he said. "She sounds like a total nightmare."

"Why was she phoning you?" asked Sarah.

"Kay's not turned up to an interview," said Mark.

He took off his glasses and rubbed the bridge of his nose. This was bad news - Kay had been expensive but good. She'd taken on the role of interviewing the locals up north while he stayed at home, doing academic research in Edinburgh, and supporting Sarah with Beth.

"What are you going to do?" asked Sarah.

"Well, if she's gone off somewhere, then I'm totally snookered," said Mark. "She was doing interviews in Ruthven village, the last round. I'll have about three months of interviews to re-do."

"So, what are you going to do about it?" repeated Sarah, increasingly irritated and close to giving him
that
look.

Mark was already dialling Kay again. No answer. He checked through his notebook and found a number for Kay's hotel, in a village about eighty miles north of Inverness. Ruthven - that was the name of the woman who'd called.

Sarah grabbed Mark by the shoulder. "I asked what you are going to do about it?" she asked.

"This is nothing to do with what she looks like?" asked Sarah.

Mark had accepted Kay as a friend on Facebook - big mistake. The profile photo she used showed an attractive woman in her mid-twenties with curly, red hair in tight ringlets and the sort of face that was cute and mischievous rather than beautiful. Exactly the sort that Sarah - in her postnatal rage - didn't want to see anywhere near Mark.

"Absolutely nothing," said Mark. "She works for me and she's really let me down. I should never have let her do this."

Porcelain Princess by Jon Jacks
TrafficStopAnAdventureTwiceTold by Lynn Chantale
The Unfinished World by Amber Sparks
Commitment by Margaret Ethridge
The Sharecropper Prodigy by Malone, David Lee
Resplendent by Stephen Baxter
Boogers from Beyond #3 by M. D. Payne
The Clandestine Circle by Mary H.Herbert
Inside Heat by Roz Lee
Sterling Squadron by Eric Nylund