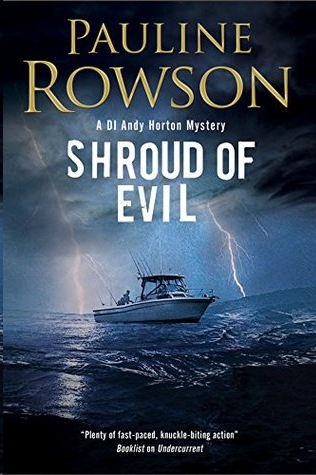 BLOOD ON THE SAND *

FOOTSTEPS ON THE SHORE *

First published in Great Britain and the USA 2014 by

The right of Pauline Rowson to be identified as the author of this work has been asserted in accordance with the Copyright, Designs & Patents Act 1988.

‘G
ood result.’ Tim Shearer, the lean and rather dapper Chief Crown Prosecutor, addressed Andy Horton outside the courtroom on the Isle of Wight.

‘Would have been better if they’d pleaded guilty to begin with instead of wasting everyone’s time,’ Horton replied.

Shearer nodded in agreement. ‘I’d give you a lift back to the ferry, only I’m staying over to discuss a couple of other cases.’

And thankfully they weren’t Horton’s. The Isle of Wight was not his patch. That was under the control of the acerbic stick insect DCI Birch, currently off sick following a hernia operation, and his fat sergeant, DS Norris. But a robbery from Northwood Abbey, on the northern coast of the island, at the end of June had resulted in the villains being caught by Horton and Sergeant Cantelli, as they were trying to sell the stuff on in Portsmouth, five miles across the Solent, at the beginning of July. And that
was
his patch. The thieves, Jamie Maidment and Lewis Foreland, had been advised by their solicitor to plead not guilty, but thankfully they’d now seen the light – though not before it going to the Crown Court and a jury being sworn in.

Horton told Shearer he had his Harley. As he collected his leather biking jacket and helmet from the witness waiting room he thought what a breath of fresh air the new CCP was. The last one had been counting the days until his retirement and had become disillusioned with the criminal justice system. Not that Horton blamed him for that: he often despaired of it himself. But Shearer was clever, cooperative and keen. He’d recently arrived from London and had told Horton that the loss of his wife, killed in a car accident, had prompted him to make a fresh start in a city where not every street, shop and restaurant would remind him of his Jenny. It was the same name as Horton’s mother, except he always thought of her as Jennifer. And while once he’d tried very hard to obliterate all memory of the woman who had abandoned him at the age of ten to the mercy of children’s and foster homes, now he thought of her constantly, or rather as frequently as his workload permitted. The change of heart had come about as a result of a case in December when he’d discovered that her disappearance just over thirty years ago was not because she’d got sick of having a kid in tow and had run off with a man, but because someone had wanted her to vanish. He didn’t yet know why or what had happened to her but he was getting closer to discovering the truth.

The October sky was overcast, threatening rain, and a brisk, chilly wind had sprung up. In it Horton caught the smell of the sea coming off the River Medina which fed down to Cowes and into the Solent. He headed out of Newport on the Harley and made for the abbey, pleased for once to be able to deliver good news and relieved to get out of the stuffy overheated courts. Even stopping off at the abbey he would easily make the one o’clock sailing to Portsmouth, which would get him back to his office by about two. Time enough to clear up some paperwork and see what else had come in over the last few days while he’d been preoccupied with this case. But as the houses gave way to fields he sensed in himself a reluctance to head straight for the abbey. There was somewhere en route that he wanted to see. There would be another sailing at one thirty and again at two o’clock. Cantelli was more than capable of handling anything that had cropped up and, if it was urgent, the sergeant would have rung him. Or their boss, DCI Lorraine Bliss, would have been squawking down the line at him.

He indicated off the main road and turned on to a narrow deserted country lane. Perhaps it was reading that newspaper article while waiting to be called into court that had made him think of Lord Eames who, it was reported, was leading a trade delegation to Russia. Or perhaps it was the fact that one of the stolen items recovered from Jamie Maidment and Lewis Foreland had been a wrought-iron weather vane made by the famous sculptor Albert Trostley and donated to the abbey by Lord Richard Eames, one of the abbey’s generous benefactors. But Horton didn’t need any article to conjure up thoughts of the trim and aloof aristocrat. Since meeting him in August he’d mentally replayed the conversation that had taken place between them in the exclusive Castle Hill Yacht Club in Cowes. Eames had denied any involvement in Jennifer’s disappearance but Horton didn’t believe him. Getting proof of that though was another matter. And he didn’t think he’d find it at Eames’ Isle of Wight holiday property, which was where he was heading.

He pulled up at a junction by a small copse and withdrew an Ordnance Survey map from the inside of his jacket. After consulting it and putting it back he swung right, heading towards the sea. The lane was narrower now, barely wide enough for one car to pass. The trees hadn’t yet lost their foliage and the leaves were deepening to a blaze of red and gold.

Soon the tarmacked road gave way to a gravel track. A sign on his right said: ‘Private Road. No access.’ Horton ignored it. He noted a group of stone buildings in the fields on his left. They looked uninhabited and the tall chimney on one of them hinted it might have been used as a furnace at some stage. There was a small track on his right.

The trees closed in again on either side of him and within seconds he was pulling up in front of a solid grey stone wall and a pair of sturdy wooden gates, behind which were more trees. The house was obscured from his view. Were there security cameras? If so then they were well hidden. Perhaps even now someone was inside the house viewing monitors and a police unit would arrive to ask him what he was doing here.

He could press the intercom and see if Lord Eames kept a housekeeper or security guard on the premises, but he didn’t. Instead he swung the Harley around and returned along the track until he came to the fields now on his right and the track on his left. He took the track heading north, towards the sea. After about a third of a mile it petered out and in front of him was a dense wood. He silenced the engine and again consulted his map. There were no public footpaths and a sign bordering the woods told him they were ‘Private’ and that ‘Trespassers would be prosecuted’. He stuffed the map in his jacket and climbed the low fence.

As he trekked through the undergrowth his mind roamed back to what he had unearthed about Jennifer since being given – or rather discovering – a photograph on his boat left by a man who had called himself Edward Ballard and who had alleged he’d been attacked while mooring up in the same marina where Horton lived. Since then Ballard had vanished – or rather he’d never existed to begin with, certainly not with that name. Horton had checked all the databases. He’d since learned that the black and white photograph had been taken on 13 March 1967 during the first sit-in protest at the London School of Economics, where Jennifer had been working as a typist. It was a picture of six young men, one of them Lord Richard Eames. Horton recalled their confrontation in the yacht club.

‘Where did you get this?’ Eames had asked him lightly but behind the jocular tone Horton had sensed anger.

‘From a friend,’ was all Horton had been prepared to say. Eames hadn’t asked which friend.

‘It’s a long time since I’ve seen it. I hardly recognized myself,’ Eames had to admit it. There was no denying it was him.

Horton had asked if Jennifer had taken the picture but Eames claimed memory loss. Convenient. He’d told Horton that she’d been friendly with one of the men in the picture, James Royston, who, Horton had since ascertained, had died of a drugs overdose in 1970. The Coroner’s report said Royston had been found dead in a sordid bedsit in London with puncture marks in his right arm and enough heroin in his system to knock out a rhinoceros. No one claimed to have known that Royston had been a drug addict, but then no one had denied it either. The sister who had raised her younger brother after their parents had died hadn’t seen or heard from him for five years.

Eames had told Horton he’d come down from Cambridge, where he was a student, to the London School of Economics that day to visit a friend, Timothy Wilson, the man beside him in the picture, who had later been killed in a motorbike accident in 1969 on a deserted road across Salisbury Plain on a calm, clear April night. It hadn’t been obligatory to wear a crash helmet back then, so Wilson had stood little chance of surviving. But what had caused the crash, Horton wondered. Wilson
could
have been startled by an owl, except there weren’t any on Salisbury Plain, and neither had there had been any army manoeuvres across the plain that night. The autopsy report confirmed there were no alcohol or drugs in Wilson’s system, and nothing was wrong with the bike. The Coroner had put it down to a moment’s lack of concentration. That was possible. Perhaps Wilson had been upset or angry about something. Perhaps he’d had a row with Eames, because Horton believed Wilson had been coming from Eames’ Wiltshire estate. Horton had travelled that route himself three weeks ago.

The third dead man, Zachary Benham, had no living relatives. In fact, like Horton, he’d been illegitimate. But unlike him, Benham had been a product of a wartime romance or perhaps just a one-night stand, and his mother had given birth and handed him over to the orphanage. But Zachary Benham had proved himself to be resourceful and clever. He must have been, thought Horton, to have earned himself a place at the London School of Economics in 1966. But he had died along with twenty-three other men in a fire that had raged through their ward in Goldsworth Psychiatric Hospital in Surrey in 1968. The hospital had closed in the 1980s. The two night nurses on duty, Sheila Grover and Malcolm Bellings, were both dead. Nurse Sheila Grover had sounded the alarm ten minutes after the fire had started, allowing it to get a stronghold and it had spread rapidly, trapping the men inside the ward. They had evacuated the building but too late for those twenty-three men including Zachary Benham.