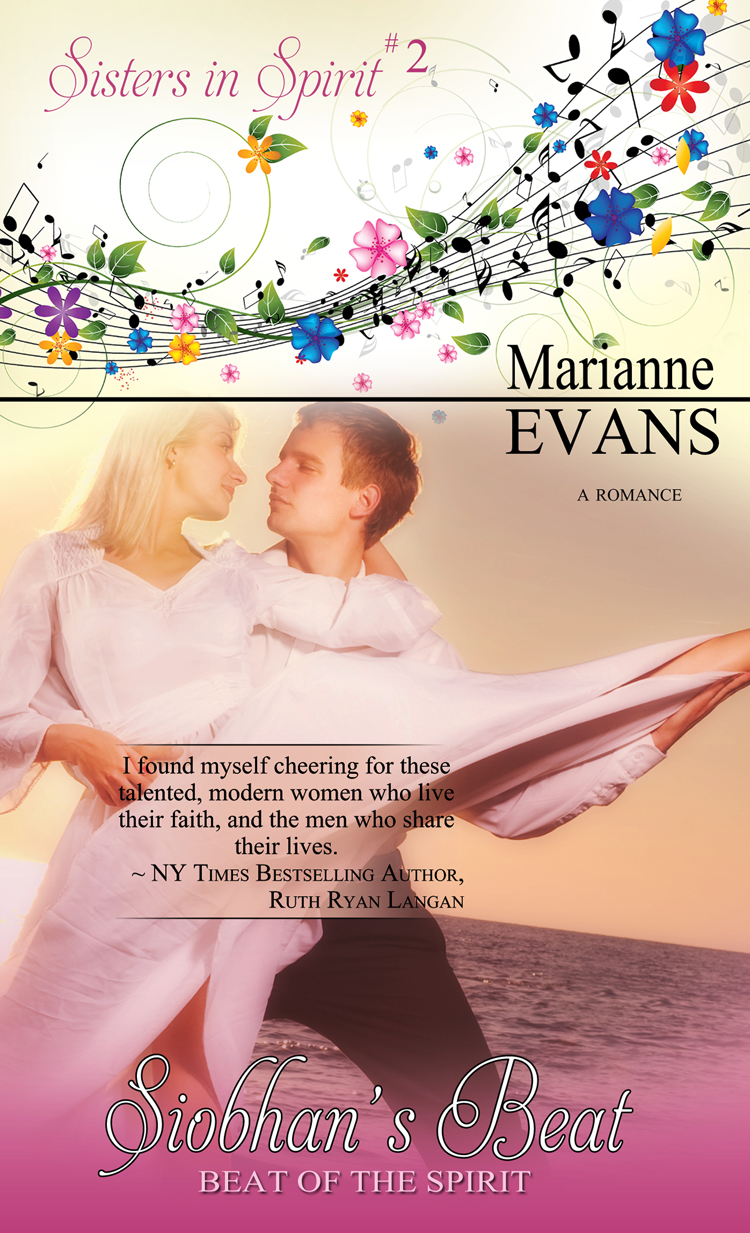 Other Book in the Series

This is a work of fiction. Names, characters, places, and incidents either are the product of the author's imagination or are used fictitiously, and any resemblance to actual persons living or dead, business establishments, events, or locales, is entirely coincidental.

To anyone who has ever felt like they're at the end of their road and their dreams have died. Endings are only beginningsâif we let go and let God lead the way. May this story help remind you to stand strong, and mount up with wings...as eagles.

Be sure to pick up all the Sisters in Spirit stories

I found myself cheering for these talented, modern women who live their faith, and the men who share their lives. This talented author satisfies both heart and soul. ~
NY Times
Bestselling Author Ruth Ryan Langan

Above all else, guard your heart, for everything you do flows from it. ~ Proverbs 4:23

Siobhan Douglas wandered toward the wings of the auditorium at Westerville High, her focus intent. Oh, she maintained a casual air; she paused here and there to say hello to bunches of people she knew, but she was on a mission. Of late, a certainâ¦
person
â¦left her thoroughly intrigued, and she wanted to see him.

Him
was Brian Morris.

The image her mind conjured stirred a smile. Brian was a shy guy. A good guy. A guy of so-called average features who was therefore overlooked by most teens in their frenetic, claim-all-the-attention-you-can world of high school cliques and socialization. He was decent looking, but an introvert. He was a math and science nerd, not a jock. He was quiet and steady, not a boisterous or showy addition to the
A
crowd. Brian's innate sense of calm didn't deter Siobhan Douglas whatsoever. Rather, the facets of his personality both attracted and intrigued her.

Siobhan first came aware of Brian when plans came together for the Westerville High mid-winter musical, Brigadoon. Maeve Callahan, one of Siobhan's best friends in the world, had scored the lead role of Fiona Campbell and Siobhan was a member of the dance ensemble. Brian, meanwhile, headed up the prop crew. She pictured him with a hammer and nails, speckled by paint and dusted by bits of wood debris.

Sure enough, there he was, nearly hidden by a tall wooden prop already half-painted and on its way to resembling the depths of an enchanted Scottish forest.

Following a flip of her hairâshe wished she'd had time to run a brush through it after sixth periodâshe strode toward the left wing, shedding a lightweight rain jacket and swinging a book bag full of study aids and assignments for upcoming mid-terms. Yuck.

Lost in the idea of facing down an intensive math exam Siobhan lost focus for a second, so the fact that Brian greeted her first gave her pulse a happy jump start.

Don't be shy. Talk to him like you do everyone else. He's just a nice guy. A really nice guyâ¦

She dropped her bag and knelt next to him, propping her hands on her knees. “I love the set design. It's really coming together.”

“Thanks. We just finished painting the drop for the village.” He gestured toward the freshly decorated canvas stretched out nearby that would be lowered and lifted from the rafters as needed.

“I think that's going to be the background for a couple of the dance scenes. I can't wait for full-out dress rehearsals!”

“I watched you practice the other day. You're greatâ¦you know, I mean, the ensemble is great.”

Another zap of energy swept across Siobhan's skin. “Thank you. And I've heard you sing during bass warm-ups in choir. You have a good voice. You should have auditioned for the musical. Me? I can't sing worth anything, but being in Mr. Tuttle's mixed chorus class gives me the chance to hang out with my friends.”

Brian grinned at that. “I've noticed you're really close with Maeve and Kassidy. They'll be great in Brigadoon. And Aileen Brewerâmanâshe's in a league of her own when it comes to singing.”

“True.” Siobhan's chest swelled with happiness and pride on behalf of her best friends. “Ailee and Maeve have been accepted to NYU's music program and theater program on full-rides. They're awesome.” Siobhan offered a shy glance. “I still think you should give singing a try.”

“Nah. Not brave enough. Besides, I never wanted to be the star of the show. That's not my role to play, know what I mean?”

“Absolutely.”
See also, remarkable
. “I feel the same way. I love to dance, but I don't need a spotlight, I just love to move in time to the music. It sets me free somehow.”

“What about you? What will you do after graduation?” Brian's interest reached out to envelop.

Dazzled by his reaction, Siobhan felt heat bloom, so to combat the reaction she lifted a brush and dipped it in green paint, adding sprigs of grass to the flat. She tilted toward him and lowered her voice. “Know what I want to do after that?”

They were co-conspirators, bound by the sharp aroma of paint, the musty atmosphere of a well-worn wooden stage at their school, and the buzzing chatter of nearby techs. Public, yet a world unto themselvesâ¦

“I want to open my very own dance school.”

His eyes went wide. “I have no doubt you'd be fantastic. Youâ¦your friendsâ¦you're the kind of people meant for greatness.”

Siobhan stilled her creative motions at once. “So are you.”

Emphatic and sincere, she directed her gaze to his. Brian glanced away, but soon enough his attention returned. “That's really nice of you to say.”

He shrugged, dashed dark blue against their shared canvas. “I'm happy to be in the background. You and your friends, though, you're incredible.” The concluding statement caused her heart to race. Sure, insecurity was part of his journey, but Siobhan's respect and admiration for him grew tenfold. She bit her lips together and opted at once to take a huge leap of faithâ¦and heart.

“Are you going to Winter Formal?”

In answer, Brian issued a wry chuckle then looked her straight in the eyes. His expression said it all:
Who, me? Are you serious?

Siobhan lifted her chin and plunged ahead. “Would you want to take me to the dance?”

She actually held her breath, hoping and praying like any other giddy high-schooler, because that's just what she was. Other people might be blind to Brian's gifts and compelling personality, but Siobhan had always sensed his depth of character. Going to Winter Formal on his arm would be the best.

Swirling her brush in water then tipping its bristles in a hue of royal blue, Siobhan continued to paint and divert from any kind of awkwardness. “I know the girl asking the guy thing is pretty weird, butâ”

Siobhan's senses hummed until she noted the way his smile dimmed. “Ummâ¦Siobhan, I can't really afford a limo ride, or a fancy dinner.” His tone lowered, his Adam's apple bobbed when he swallowed. Panic rode through his furrowed brow and struck the light from his sapphire eyes. “I suppose I could take you to a place likeâ”

“Doesn't matter.” Placing a hand on his forearm, Siobhan cut him off. His build was strong and solid, his skin warm beneath her touch. “Truly. I'll be happy wherever we go, and whatever vehicle we arrive in. I'd be proud to go with you.”

“You're not kidding about this, are you?” His eyes sparkled with teasing mischiefâ¦and a hint of doubt.

“I most assuredly am not.” After feigning a lofty air, Siobhan giggled and shot him a playful wink.

Full of wonder, his reaction shot a thrill through Siobhan's system. That's when it all made senseâher attraction to Brian, the unspoken, as yet unexplored connection they seemed to share. He was simple and unassuming, and didn't care about popularity, not if it meant he had to compromise his ideals. Living life on those terms took character. It took depth of spirit and strength of soul to buck what was popular and culturally accepted. Siobhan could relate, for she had made a vow of solidarity and moral purpose just a few months ago with her three best friends, the very ones Brian had mentionedâAileen, Kassidy, and Maeve.

When she drew her hand from his arm, overhead stage lights shone off the surface of the sterling silver purity ring on the third finger of her right hand.

“I think it would be amazing,” she concluded. “I've already climbed out on a limb, and I'm hoping I haven't made a fool of myself, butâare we official then?”

Siobhan released a joyful sound while he stammered then she wrapped him in a quick, tight hug.

Unexpectedly the moment turned serious. He pulled back to look into her eyes. “Why, Siobhan? Why me?”

He appeared so plaintive, so removed from his element and caught off guard. What a shame that so decent a person should be rattled by returned conviction, and affection.

“Because good guys should never be in the background. Because in my eyes, you're fantastic.”

Siobhan Douglas pulled the door closed and locked it tight. Another day at the Douglas Dance Academy had come to a close. Fulfillment worked through her heart and ended in the generous, happy curve of her lips. Her last session tonight had been an intermediate class that pushed her and her pupils to the limit. Still, the exertion felt great.

Now, she couldn't wait to get home.

Quick steps took her down Main Street, to the municipal lot where she parked her car. The air around her featured a prelude to winter, right down to the smell of snow and the sharp, woodsy aroma of fireplaces being put to work. In minutes she was behind the wheel of her small sedan, headed out of town toward her ranch along the O'Mara River; she fantasized about a chick-flick, one brimming with romance, an afghan, and a bit of mental rest. The past few months were catching up with herânot that she would complain in the least. Alongside Aileen Brewer, Kassidy Cartwright and Maeve Callahan, Siobhan was being given the chance to chase a dream of song and dance performance, a dream of sharing their love of God with the world. Sisters in Spirit was taking their lives by storm in the best ways imaginable. Still, a bit of down time was in order, and she relished the prospect.