Read Sister of the Housemaster Online

Sister of the Housemaster 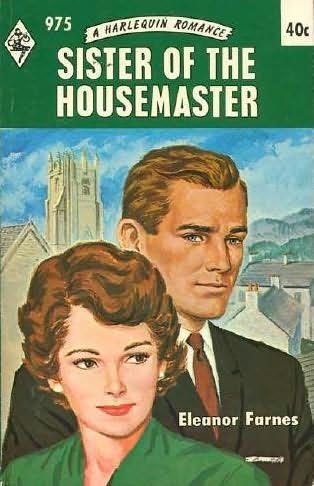 SISTER OF THE HOUSEMASTER

A boys
’
public school, set in a pleasant old cathedral town, is the background for this charming story of Ingrid Southbrook, who came to keep house for her brother during his wi
f
e's illness.

Sylvia Southbrook also had a brother, rather celebrity, and Ingrid had no doubt that he would be a selfish and disagreeable as Sylvia herself. But Ingrid would have been surprised to know that her meeting with Patrick was destined to change the whole course of her life

THE Housemaster came down the flight of stone steps, each one worn into a hollow by the feet of innumerable schoolboys through the centuries, passed under the vaulted roof of a wide lobby and emerged into the darkness of the quadrangle. Bound the wide stretch of lawn, school buildings stood in dark masses, their blackness pierced by the warm yellow of many lighted windows, and behind them, silhouetted against the starlit sky, rose the magnificent spire of the Cathedral. There was a beneficent quiet and peace over everything, yet Arnold Southbrook knew that behind the old and noble fa
c
ades of the buildings there was a mass of turbulent boyhood, a conglomeration of conflicting personalities, a new generation to be moulded laboriously into good citizens. He was, after many years in teaching, still an idealist. He had, after all kinds of discouragement to it, still a sense of humor. He could smile, as he walked into his own House, to detect a smell of burning from the direction of the studies. Some of the boys, anticipating what they considered the dreariness of School supper, were concocting their own messes on the stoves they were not supposed to have.

The smile disappeared as he approached his own quarters. He came out of the world which occupied his working hours, and remembered his wife, who was waiting for him now. It was true that Sylvia had a good deal to complain of at the moment, but he sometimes wished she would not complain at such length. It became unbearably tedious, and it had the effect of keeping his friends
a
way. He hoped that a letter from his young sister Ingrid would be waiting for him, and that she might find it possible to come and help Sylvia for a few weeks, for unless somebody was there to run the house, Sylvia would never do as the doctor ordered her, and give her leg complete rest. It was too bad, reflected Arnold, to bring Ingrid away from her friends and expect her to devote herself to Sylvia
’
s well-being, but he had to admit that it would be very pleasant to have her at the School
—
if she would come.

Arnold
’
s house was part of the large building of which he was Housemaster. It was at one end of the building and separated from the common rooms of the younger boys by a noble hall. The living-room opened on to a pleasant, private garden and was a room of beautiful proportions. Now, in winter, the long windows would be closed and the velvet curtains drawn snugly against the outer darkness. The fire would be burning, and the room should have been a haven and a comfort to him, yet his heart sank as he opened the door and went in.

Sylvia was in the room, but somebody else was with her. A slim girl with dark brown hair and laughing brown eyes, who rose and crossed the room to greet him. She kissed his cheek and smiled at him.

“
You certainly couldn
’
t. You are a good Samaritan. Are you going to stay?
”

“
Of course I
’
m going to stay. Sylvia has been telling me all about her leg, and I
’
m quite sure it never will heal if she doesn
’
t do as the doctor says. I
’
m going to be a perfect dragon, and not let her stand up for six weeks.
”

“
I
’
m sure I can cope with everything,
”
smiled Ingrid.
“
Sylvia must give me some sort of schedule. I was so sorry to find her like this, but you, Arnold, look very well.
”

They embarked on a general conversation. It was true that Sylvia liked it to come back to herself very often, and it was true that the note of complaint was still there in her voice, but Arnold found it more bearable now that Ingrid was here, found the comfort in the room that should be there, but so often was not. Ingrid
’
s face was so ready to break into a smile, her brown eyes so readily attentive to what he had to say, that the supper bell took him by surprise and he realized she had not talked of herself at all. He rose to go to the Dining Hall just as a tall, fair gir
l
came into the room. This was Miss Everton, the Matron of Arnold
’
s House, and Arnold introduced her to Ingrid before hurrying off to the Dining
H
all.

“I h
ope to see you again soon,
”
said Miss Everton, smiling at Ingrid and then hurrying away. Sylvia looked disdainful.

“
Been doing what she could
!
”
he said disgustedly.
“
A great deal she
’
s done, I must say. Flies in, as she did just then, and flies away again. Doesn
’
t stay long enough to be asked to do anything. Scatterbrained.
”

“
Looks! She looks all right, but looks are by no means everything. The boys like her looks, but I wonder if they like the way she looks after their things.
”

By this, Ingrid gathered that Miss Everton was popular in the House, and she was not surprised that Sylvia did not approve of her. She abandoned the subject and began to talk of something else until their supper was brought in by one of the school maids. She arranged it on a small table which she placed by Sylvia
’
s couch.

“
I
’
m afraid you won
’
t find the school food very exciting,
”
said Sylvia, looking at the supper with disapproval.

“
It will keep us alive, I dare say,
”
said Ingrid drily, thinking that she would not start by trying to justify everything to Sylvia. It seemed that she and Sylvia would be having all their meals together, since Arnold would be in Hall, and they would be forced to spend a good deal of the day together, so that some means of living equably must be found, and the hours must be organized to give Ingrid some freedom. She would hold a watching brief for a day or two, and when she was familiar with routine, she would plan how to get the best out of the next six weeks.

She had never come much into contact with her sister-in-law. Arnold had already been a master at this school when he met Sylvia, and his courtship, marriage and married life had all taken place here. Ingrid lived in London, and only on visits had she become acquainted with Sylvia. From the first, she had never felt really welcome here, and there had always been constraint between the two.

They had always kept the peace, but there was no warmth or cordiality between them
.
Yet Ingrid had continued to visit them for Arnold
’
s sake. Arnold was her only brother and as fond of her as she was of hum. She would not be crowded out of his life because his wife seemed to wish it
.
For the time being, however, even Sylvia was glad of her presence and would try to keep affairs running smoothly.

Arnold returned when Ingrid was in the kitchen trying to find the paraphernalia for making
coffee. She called to him when she heard his voice.

“
Arnold, come and tell me where everything is, please.
”

He came into the kitchen. She smiled at him affectionately, thinking that he was looking too old for his age. Still handsome, still so kind-looking, but not as young as he should look. Perhaps it was an ageing business, living with Sylvia. He told her where to find everything, and watched her as she made the coffee and set the tray.

“
One of the masters is coming over for some papers,
”
he said.
“
He might like to have some coffee with us.
”

Arnold reflected that Laurence Pinder probably would stay and have coffee as Ingrid was with them, though he was by no means a frequent visitor ordinarily, and when he did come, stayed as short a time as possible. He took up the tray and carried it into the living-roo
m
.

“
Pinder is coming over for some papers
—
I thought he might be in time for some coffee.
”

“
It wouldn
’
t be curiosity that is bringing him, I suppose?
”
asked Sylvia.

“
Curiosity about what, my dear
?”

“I
haven
’
t met him before?
”
asked Ingrid, who, on her previous visits, had met one or two members of the staff.

“
No. He
’
s fairly new. A language wizard. But he has played cricket for
his
County, and once played rugger for England, so you can see that he
’
s something of a giant.
”

“
And of course,
”
said Sylvia,
“
quite an advertisement for the school.
”

Oh dear, thought Ingrid, how wearing it must be for poor Arnold to live continually with this jaundiced outlook of Sylvia
’
s. I suppose it has become a habit to decry everything, but how it
s
tunts conversation, withers it and
k
i
l
ls it. No wonder Arnold has become quieter
and
seems older than
his
years. No wonder he finds
his
greatest consolation in the boys.

They sat round the blazing fire drinking their coffee. After a quarter of an hour, there was a tap on the door and Arnold went to open it to Laurence
P
inder.

The young man who came in was tall and broad-shouldered. He looked, Ingrid thought, as if he would be a power to be reckoned with on the rugger field. His brown hair wa
s
a little and was roughish in texture, refusing to be kept neatly in place. His eyes were very blue, and he had a candid and friendly smile. He crossed the room to
Sylvia
’
s side, making polite enquiries about her health, and listening w
i
th equal politeness to her detailed answers. Then he turned to where Arnold was waiting to introduce him to Ingrid.

“
My sister,
”
Arnold explained.
“
She has come to look after household things for us while my wife is laid by the heels.
”

Laurence sat down and accepted some coffee. Normally, he would have talked for a while and then taken his leave. This evening, he showed not the slightest inclination to depart. He had arrived with his excuse already prepared, and indeed, he had a good deal of correcting to do, but he blithely put it off until another time with the excuse, and discovered that it was really very pleasant here at Southbrook
’
s fireside.

Another tap at the door heralded the arrival of Miss Everton.

Relentless by Lynch, Karen
Song Above the Clouds by Rosemary Pollock
One Degree of Separation by Karin Kallmaker
BUY ME by Riley, Alexa
08 The Magician's Secret by Carolyn Keene
Conservation of Shadows by Yoon Ha Lee
Plunge (Alpha Athletes #1) by Violet Paige
Chosen by Lisa Mears
The Lost Journal Part 2 (A Secret Apocalypse Story) by Harden, James
Prime Selection by Monette Michaels