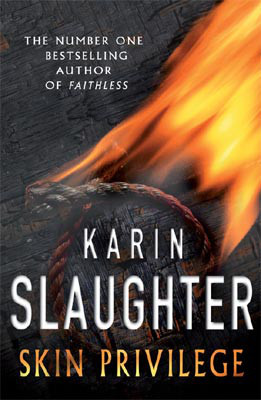 Heart-stopping suspense…cutting-edge forensic detail…flawless storytelling…these are the hallmarks of Karin Slaughter's novels. From
Faithless
to
Triptych
, Slaughter's gritty, gripping thrillers have dazzled critics, who crown her “one of the best crime novelists in America.”* Now the #1 internationally bestselling author returns to rural Grant County, Georgia, in a riveting tale of murder in a small town, a troubled woman cop at the center of it all, and the shocking secrets that keep a killer just beyond reach
In a stifling jail cell in a hardscrabble Georgia town, Detective Lena Adams sits in stubborn silence: bruised, angry, and the only suspect in a horrific murder that left a woman incinerated beyond recognition. A hundred miles away, Police Chief Jeffrey Tolliver has gotten the call that his young detective has been arrested. Jeffrey's wife, pediatrician and medical examiner Sara Linton, has little patience for Lena or her dramas. Fighting a heartbreaking malpractice suit, struggling to pick up the pieces of a shattered career, the last thing Sara needs is to see Jeffrey playing Lena's knight in shining armor. Sara cannot guess that within days she herself will be at the center of a bizarre and murderous case.
For Lena has fled back to the place where she grew up hard, careening back through the shadows of her past and into a shocking underground world of bigotry and rage. The man who raised her is slowly killing himself with drugs. The man who beguiled - and beat - her is reaching out from prison. And now only Jeffrey and Sara can free Lena from the web of lies, betrayal, and brutality that has trapped her - as this powerhouse of a novel races toward its shattering climax…and a final, unforgettable twist.

It’s no simple case of murder. Lena Adams has spent her life struggling to escape her past. She has only unhappy memories of Reece, the small town which nearly destroyed her. She’s made a new life for herself as a police detective in Heartsdale, a hundred miles away – but nothing could prepare her for the violence which explodes when she is forced to return. A vicious murder leaves a young woman incinerated beyond recognition. And Lena is the only suspect. When Heartsdale police chief Jeffrey Tolliver, Lena’s boss, receives word that his detective has been arrested, he has no choice but to go to Lena’s aid – taking with him his wife, medical examiner Sara Linton. But soon after their arrival, a second victim is found. The town closes ranks. And both Jeffrey and Sara find themselves entangled in a horrifying underground world of bigotry and rage – a violent world which shocks even them. A world which puts their own lives in jeopardy. Only Jeffrey and Sara can free Lena from the web of lies, betrayal and brutality that has trapped her. But can they discover the truth before the killer strikes again?

‘This is without doubt an accomplished, compelling and complex tale, with page-turning power aplenty’ Daily Express

‘Slaughter knows exactly when to ratchet up the menace, and when to loiter on the more personal and emotional aspects of the victims. Thoroughly gripping, yet thoroughly gruesome stuff’ Daily Mirror

‘An explosive thriller with plenty of twists – this is criminally spectacular!’ OK!

‘A great read… This is crime fiction at its finest’ Michael Connelly ‘Slaughter’s plotting is relentless, piling on surprises and twists… A good read that should come with a psychological health warning’ Guardian

‘Structured and paced brilliantly; the tension is unceasing throughout. Slaughter’s shock tactics don’t allow the reader to relax for a single moment’ The Times

‘Slaughter deftly turns all assumptions on their head. Her ability to make you buy into one reality then another, means that the surprises – and the violent scenes – keep coming’ Time Out

‘Confirms her at the summit of the school of writers specialising in forensic medicine and terror… Slaughter’s characters talk in believable dialogue. She’s excellent at portraying the undertones and claustrophobia of communities where everyone knows everyone else’s business, and even better at creating an atmosphere of lurking evil’ The Times

‘With Blindsighted, Karin Slaughter left a great many mystery writers looking anxiously over their shoulders. With Kisscut, she leaves most of them behind’ John Connolly

‘Slaughter’s narrative is superb, a game of show and tell that constantly exhilarates as the next unexpected piece of the jigsaw fits into place’ Birmingham Post

‘Gripping, gruesome and definitely not for the faint-hearted’ Woman Home

‘Karin Slaughter is a fearless writer. She takes us to the deep, dark places other novelists don’t dare to go. Kisscut will cement her reputation as one of the boldest thriller writers working today’ Tess Gerritsen

‘This gripping debut novel, filled with unremittingly graphic forensic details, is likely to have Patricia Cornwell and Kathy Reichs glancing nervously in their rearview mirrors because rookie Karin Slaughter is off the starting grid as quickly as Michael Schumacher and is closing on them fast’ Irish Independent

‘Brutal and chilling’ Daily Mirror ‘Energetic, suspenseful writing from Slaughter, who spares no detail in this bloody account of violent sexual crime but also brings compassion and righteous anger to it’ Manchester Evening News

‘It’s not easy to transcend a model like Patricia Cornwell, but Slaughter does so in a thriller whose breakneck plotting and not-for-the-squeamish forensics provide grim manifestations of a deeper evil her mystery trumpets without ever quite containing’ Kirkus Reviews

‘Wildly readable… [Slaughter] has been compared to Thomas Harris and Patricia Cornwell, and for once the hype is justified… deftly crafted, damnably suspenseful and, in the end, deadly serious. Slaughter’s plotting is brilliant, her suspense relentless’ Washington Post

‘Slaughter has created a ferociously taut and terrifying story which is, at the same time, compassionate and real. I defy anyone to read it in more than three sittings’ Denise Mina

‘Taut and tight and tinged with terror’ Houston Chronicle ‘A story that roars its way through the final pages, Slaughter’s thriller is scary, shocking and perfectly suspenseful’ BookPage.com

‘The undertone of violence is pervasive, even at quiet moments, amplifying Slaughter’s equation of intimacy with menace and placing her squarely in the ranks of Cornwell and Reichs’ Publishers Weekly

‘A page turner… has more twists than a Slinky Factory’ People

‘A debut novel that blows your socks off. Karin Slaughter has immediately jumped to the front of the line of first-rate thriller writers…’ Rocky Mountain News

What had they given her? What had the needle brought into her veins? She could barely keep her eyes open, but her ears were working almost too well. Under a sharp, piercing ring, she could hear a skip in the car’s engine, the
thump-thump
as the tires rolled over uneven terrain. The man sitting beside her in the backseat spoke softly, almost like a lullaby you would sing to a child. There was something calming about his tone, and she found her head dropping down as he talked, only to jerk back up at Lena ‘s curt, cutting responses.

Her shoulders ached from stretching her hands behind her back. Or maybe they didn’t ache. Maybe she just thought they should, so her brain sent the message that they did. The ache was dull, a thud that throbbed along with her beating heart. She tried to focus on other things, like the conversation going on around her or where Lena was driving the car. Instead, she found herself spiraling back into her body, cocooning into every new sensation like a newborn rolling into a blanket.

The back of her legs were stinging from the leather, though she did not know why. It was cool out. There was a chill on the back of her neck. She remembered sitting in her father’s Chevette on a long trip to Florida. There was no air-conditioning and it was the middle of August. All four windows were rolled down, but nothing would cut the heat. The radio crackled. There was no music, no station they could all agree on. In the front seat, her parents argued over the route, the cost of gas, whether or not they were speeding. Outside of Opelika, her mother told her father to pull over at the general store so they could buy frozen Cokes and orange crackers. They all winced as they moved to get out of the car, the skin on the back of their arms and legs sticking to the seats as if the heat had cooked their bodies to the vinyl.

She felt the car lurch as Lena put the gear into park. The engine was still humming, the soft purr vibrating in her ears.

There was someone else – not in the car, but in the distance. They were on the football field. She recognized the scoreboard, big letters screaming ‘GO MUSTANGS!’

Lena had turned around, was watching both of them. Beside her, the man shifted. He tucked the gun into the waistband of his jeans. He was wearing a ski mask, the kind you saw in horror films, where only the eyes and mouth were revealed. That was enough, though. She knew him, could almost say his name if her mouth would only move to let her.

El fin de la paz by Jude Watson
ASCENSION: THE SYSTEMIC SERIES by CALLAHAN, K.W.
The Earl I Adore by Erin Knightley
The Corps of the Bare-Boned Plane by Polly Horvath
Disgruntled by Shelley Wall
The Last Round by Montes, Emmy L.
Don't Look Back by Jennifer L. Armentrout
Eden's Root by Rachel Fisher
Covered In Paint: Book Five of the Art Of Love Series by Donna McDonald
The Book of Silence by Lawrence Watt-Evans