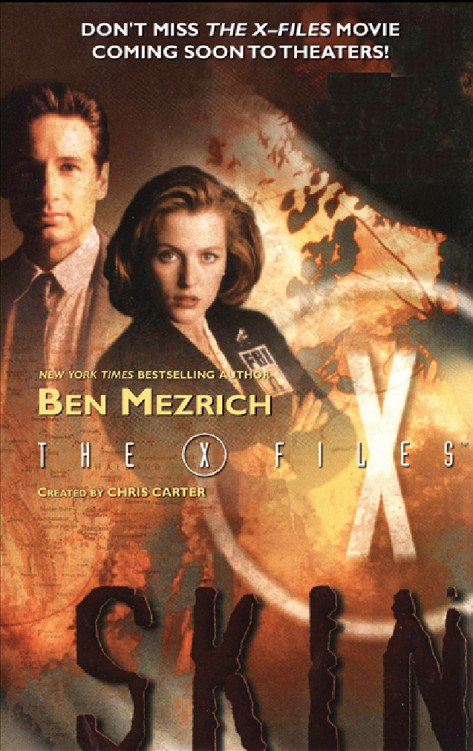 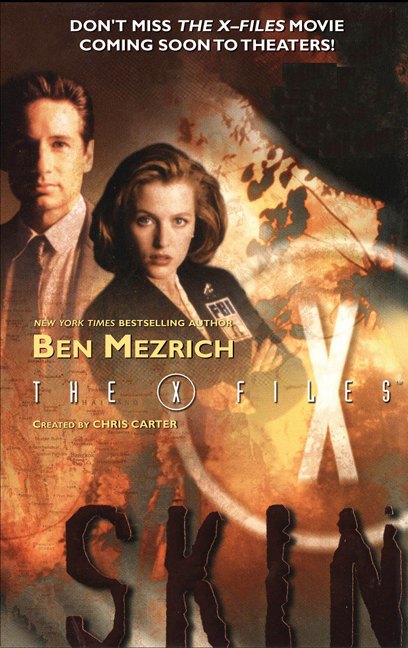 Based on the characters created by Chris Carter

Two hours after midnight, sirens tore through the cinder-block walls,…

Fox Mulder pressed a soggy hotel towel against the side…

Forty minutes later, Mulder shivered against a sudden blast of…

The broken glass glittered like an emerald carpet in the…

The sky had turned a dull gray by the time…

The ambulance seemed to float through the three lanes of…

Susan Doppler closed her eyes, the scream of metal against…

Scully watched in clinical disgust as a rat the size…

The digitized view screen flickered, then changed to a dull…

The huge crimson atrium spilled out in front of the…

Left alone in his windowless office, Julian Kyle placed both…

Twelve hours later, the rain was coming down in wide…

Mulder’s face caught fire from the inside, followed by a…

Quo Tien watched from across the street until the two…

“Hello? Is anyone home?”

Scully squared her shoulders as she and Mulder worked their…

Mulder’s shoulders ached as he strained against the heavy steel…

Scully watched from fifteen feet away as the small green…

Mulder tried to scream, but the beast was too fast.

Scully sat on the wet front steps of the clinic,… 266

Mulder’s throat constricted, and he lurched forward, gasping for air.

Scully sprawled next to Mulder against the fallen evergreen trunk,…

Quo Tien’s face suddenly drained of color as he watched…

Scully saw the sudden flash of movement and jerked her…

Mulder crashed through the twin doors shoulder first, bursting into…

Scully leaned back against the chain-link fence and shut her…

Other Books in the X-Files Series

X Two hours after midnight, sirens tore through the cinder-block walls, shattering the momentary calm. There was the screech of rubber tires against pavement—the ambulances careening to a stop in the receiving circle—and the steady wail was joined by the shouts of paramedics as they unloaded their cargo. A second later, the double doors crashed open, and the vast room seemed to buckle inward, as a torrent of stretchers streamed across the tiled floor.

“Here we go!” someone shouted, and suddenly the emergency room came alive. Bleary-eyed doctors in white coats and pale-blue scrubs leapt forward, shouting for chem trays and surgical consults. Triage nurses in pink uniforms swirled between the stretchers, trailing IV wires and portable crash carts. At first glance, the room seemed gripped by chaos, but in reality, it was a 1

highly controlled, intricate performance. The nurses and doctors played off one another like professional athletes, acting out their roles in kinetic bursts of harmony.

Huddled in a corner near the back of the ER, Brad Alger watched the unfolding spectacle with wide eyes.

Although he had been on duty for less than twenty minutes, his scrubs were already thick with sweat. Red splotches covered the sleeves of his white doctor’s coat, and his high-top Nikes had turned a strange, nearly vio-let color. His platinum-blond hair rose from his head in unruly locks, like a miniature sunburst. There were heavy bags under his glassy blue eyes, and he looked as though he hadn’t slept in months.

He rubbed a damp sleeve across his forehead, then quickly stepped aside as a disheveled nurse pushed a crash cart up against the wall next to him.

“it’s knee-deep in here. I thought the first salvo was bad—but this is crazy. How many ambulances did they say were coming?”

“Twenty-two,” the nurse answered, tossing a pair of blood-spattered gloves toward the floor. “Maybe more. At first, they thought there were only nine cars involved in the accident. Now they say it was more like thirteen.”

Alger whistled. “Thirteen cars. At two in the morning.”

“This your first Friday night?” She had spiky dark hair and kind eyes. Alger guessed 2

she was thirty, maybe thirty-five. He felt like a kid next to her, and he tried to take the fearful edge out of his voice.

“My internship started on Sunday.” The nurse offered a sympathetic smile. “Welcome to New York.”

She grabbed a clean pair of gloves from the crash cart and moved back into the fray. For the thousandth time in less than a week, Alger wondered what the hell he was doing there. A month ago, he had been a fourth-year medical student in Cincinnati, Ohio. His biggest worries had been his school loan payments and Kelly Pierce, his most recent ex. He had done a rotation in emergency back in Cincinnati—but he had never imagined anything like this.

The evening had started innocently enough. A few cardios, a handful of recent entrants into the knife-andgun club, a half dozen respiratory gomers sneaking ciga-rettes under their oxygen masks. And then the call had come over the emergency room’s intercom system. There had been a multicar accident on the FDR Drive; at least ten critical, another two dozen in bad shape. All available doctors had been summoned down from the hospital’s other departments, and the emergency room had been put on full trauma-alert.

Alger had made the mistake of asking Duke Baker—

the gargantuan, short-tempered chief resident—what that meant in English. The Duke had nearly busted a capillary berating him; the only English spoken in the Duke’s emergency room took the form of four-letter 3

words. Trauma-alert meant you tried not to kill anyone before dawn—and in the process, kept the fuck out of Duke Baker’s way.

Alger felt his pulse rocket as he caught sight of Dennis Crow. Tall, thin, with a shock of dark hair and freckles covering every inch of exposed skin. Crow was one of the four interns who had started with Alger, and the only one who seemed even more out of place. Born on a farm, trained at the University of Wisconsin—and completely in over his head at the big-city ER. In other words, he had the Duke’s footprints all over his freckled ass.

At the moment, Crow was standing between two paramedics, at the head of a stretcher on the other side of the ER. The two paramedics were struggling with a convulsing patient as Crow worked an endo tube down the man’s throat. Although both paramedics were big and burly, they were having a hell of a time keeping the patient still. One was fighting to get a Velcro restraint around the man’s shoulders, while the other was using his weight against the patient’s wrists.

Alger grabbed a pair of sterile latex gloves from the cart next to him and rushed forward. As he navigated across the room, he signaled for a crash cart, a portable EKG machine, and a chem tray. He reached Crow and the stretcher seconds ahead of the equipment and a nurse. He watched as Maria Gomez began pasting the 4

circular electrodes from the EKG monitor across the patient’s chest. She was a big woman, with thick folds of fat hanging from around her arms and neck—but her motions were fluid and practiced. Still, her brown eyes showed a spark of concern. Crow and Alger were both interns with less than a week of experience. No nurse in her right mind wanted to stand around and watch two kids playing doctor.

Alger pushed the thought away. He wasn’t playing doctor—he
was
a doctor. He focused his attention on the patient in front of him.

Caucasian, maybe twenty-four, twenty-five years old. Tall, muscular, with chiseled, boxy features and glazed, bright blue eyes. A blond crew cut, military style. His shirt had already been cut away by the paramedics, and there was a tattoo on his upper right shoulder, some sort of dragon with red flames coming out of its mouth. No visible signs of trauma, none of the marks of injury that Alger would have expected from a car-crash victim.

He watched as Crow finally got the intubation tube past the man’s epiglottis and into his throat. The man’s chest swelled beneath the EKG electrodes, and Crow quickly attached an air tube to the top of the endo tube. As the patient’s breathing resumed, he settled back against the stretcher, his eyelids rolling shut.

Alger turned toward the paramedics. “What have we got?”

The larger of the two answered as he finished fasten-5

ing the Velcro restraint around the patient’s chest.

“Found him collapsed, unconscious, in the breakdown lane, maybe twenty feet from the site of the crash. No contusions, no visible signs of trauma. He convulsed twice in the ambulance—and just a few minutes ago he went into respiratory distress.”

The paramedic stepped back from the stretcher. “No ID, no wallet. Doesn’t respond to any stimulus at all. He was conscious for a few minutes in the wagon—but we couldn’t get him to answer any questions.”

“Start him on any meds?”

The paramedic shook his head. “His pulse and BP

seemed fine. Like I said, his breathing didn’t go down until a few minutes ago.”

“What about the EKG?”

“You’ll be the first to see it. It was a real grab and dash at the scene. We had another in the same ambulance, in much worse shape. We’re not even sure this one was involved in the accident—he might have been a by-stander. Certainly doesn’t look like he was thrown through a car windshield, or anything like that.” He paused. “Okay, you guys got it from here?” There was obvious hesitation in the paramedic’s eyes.

Alger felt his face flush red. He couldn’t help how young he looked. He nodded, his expression bold. The paramedic turned and headed back toward the double doors.

His partner gave Alger a tiny nod, then followed. It was up to the two interns now. Alger tossed a glance toward 6

the Duke, huddled over a patient on the other side of the ER, then gritted his teeth. He was fresh—but he could handle this.

Uncontrollable by Shantel Tessier
Sappho by Nancy Freedman
A Dark Kiss of Rapture by Sylvia Day
Core of Evil by Nigel McCrery
Dirty Tricks One Up On You html by Myla Jackson
Blood Kin by MARIA LIMA
Flamingo Fugitive (Supernatural Bounty Hunters 5) by E A Price
Mac's Angels: The Last Dance: A Loveswept Classic Romance by Chastain, Sandra
Lacy by Diana Palmer
Where the Moon Isn't by Nathan Filer