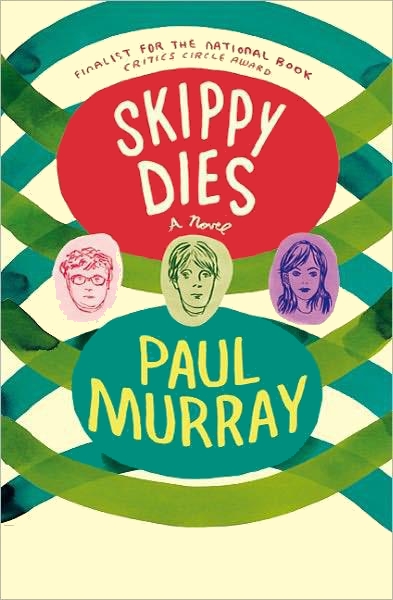 Paul Murray is the author of
An Evening of Long Goodbyes
, which was shortlisted for the Whitbread First Novel Award in 2003 and is published by Penguin.
Skippy Dies
is his second novel. He lives in Dublin.

An Evening of Long Goodbyes

Every effort has been made to trace copyright holders and to obtain their permission for the use of copyright material. The publisher apologizes for any errors or omissions and would be grateful to be notified of any corrections that should be incorporated in future editions of this book.

Skippy and Ruprecht are having a doughnut-eating race one evening when Skippy turns purple and falls off his chair. It is
a Friday in November, and Ed’s is only half full; if Skippy makes a noise as he topples to the floor, no one pays any attention.
Nor is Ruprecht, at first, overly concerned; rather he is pleased, because it means that he, Ruprecht, has won the race, his
sixteenth in a row, bringing him one step closer to the all-time record held by Guido ‘The Gland’ LaManche, Seabrook College
class of ’93.

Apart from being a genius, which he is, Ruprecht does not have all that much going for him. A hamster-cheeked boy with a chronic
weight problem, he is bad at sports and most other facets of life not involving complicated mathematical equations; that is
why he savours his doughnut-eating victories so, and why, even though Skippy has been on the floor for almost a minute now,
Ruprecht is still sitting there in his chair, chuckling to himself and saying, exultantly, under his breath, ‘Yes, yes’ –
until the table jolts and his Coke goes flying, and he realizes that something is wrong.

On the chequered tiles beneath the table Skippy is writhing in silence. ‘What’s the matter?’ Ruprecht says, but gets no answer.
Skippy’s eyes are bulging and a strange, sepulchral wheezing issues from his mouth; Ruprecht loosens his tie and unbuttons
his collar, but that doesn’t seem to help, in fact the breathing, the writhing, the pop-eyed stare only get worse, and Ruprecht
feels a prickling climb up the back of his neck. ‘What’s wrong?’ he repeats, raising his voice, as if Skippy were on the other
side of a busy motorway. Everyone is looking now: the long table of Seabrook fourth-years and their girlfriends, the two St
Brigid’s girls, one fat, one thin, both still in their uniforms, the trio of shelf-stackers from the shopping mall up the
road – they turn and
watch as Skippy gasps and dry-heaves, for all the world as if he’s drowning, though how could he be drowning here, Ruprecht
thinks, indoors, with the sea way over on the other side of the park? It doesn’t make any sense, and it’s all happening too
quickly, without giving him time to work out what to do –

At that moment a door opens and a young Asian man in an Ed’s shirt and a badge on which is written, in mock-cursive,
Hi I’m
, and then, in an almost unreadable scrawl,
Zhang Xielin
, emerges behind the counter, carrying a tray of change. Confronted by the crowd, which has risen to its feet to get a better
view, he halts; then he spies the body on the floor, and dropping the tray, vaults over the counter, pushes Ruprecht aside
and prises open Skippy’s mouth. He peers in, but it’s too dark to see anything, so hoisting him to his feet, he fastens his
arms around Skippy’s midriff and begins to yank at his stomach.

Ruprecht’s brain, meanwhile, has finally sparked into life: he’s scrabbling through the doughnuts on the floor, thinking that
if he can find out
which
doughnut Skippy is choking on, it might provide some sort of a key to the situation. As he casts about, however, he makes
a startling discovery. Of the six doughnuts that were in Skippy’s box at the start of the race, six still remain, none with
so much as a bite gone. His mind churns. He hadn’t been observing Skippy during the race – Ruprecht when eating competitively
tends to enter a sort of a
zone
in which the rest of the world melts away into nothingness, this in fact is the secret of his record-nearing sixteen victories
– but he’d assumed Skippy was eating too; after all, why would you enter a doughnut-eating race and not eat any doughnuts?
And, more importantly, if he hasn’t eaten anything, how can he be –

‘Wait!’ he exclaims, jumping up and waving his hands at Zhang. ‘Wait!’ Zhang Xielin looks at him, panting, Skippy lolling
over his forearms like a sack of wheat. ‘He hasn’t eaten anything,’ Ruprecht says. ‘He isn’t choking.’ A rustle of intrigue
passes through the body of spectators. Zhang Xielin glowers mistrustfully, but allows Ruprecht to extricate Skippy, who is
surprisingly heavy, from his arms and lie him back down on the ground.

This entire sequence of events, from Skippy’s initial fall to the present moment, has taken perhaps three minutes, during
which time his purple colour has faded to an eerily delicate eggshell blue, and his wheezing breath receded to a whisper;
his contortions too have ebbed towards stillness, and his eyes, though open, have taken on an oddly vacant air, so that even
looking right at him Ruprecht’s not a hundred per cent sure he’s even actually conscious, and it seems all of a sudden as
if around his own lungs Ruprecht can feel a pair of cold hands clutching as he realizes what’s about to happen, though at
the same time he can’t quite believe it –
could
something like that really happen? Could it really happen
here
, in Ed’s Doughnut House? Ed’s, with its authentic jukebox and its fake leather and its black-and-white photographs of America;
Ed’s, with its fluorescent lights and its tiny plastic forks and its weird sterile air that should smell of doughnuts but
doesn’t; Ed’s, where they come every day, where nothing ever happens, where nothing is
supposed
to happen, that’s the whole point of it –

One of the girls in crinkly pants lets out a shriek. ‘Look!’ Jigging up and down on her tiptoes, she stabs at the air with
her finger, and Ruprecht snaps out of the stupor he’s fallen into and follows the line downwards to see that Skippy has raised
his left hand. Relief courses through his body.

The hand flexes, as if it has just woken from a deep sleep, and Skippy simultaneously expresses a long, rasping sigh.

‘That’s it!’ Ruprecht says again, without knowing quite what he means. ‘You can do it!’

Skippy makes a gurgling noise and blinks deliberately up at Ruprecht.

But Skippy doesn’t. Instead he keeps gurgling, like he’s trying to tell Ruprecht something. He rolls his eyes feverishly,
he stares up at the ceiling; then, as if inspired, his hand shoots out to search the tiled floor. It pads blindly amid the
spilled Coke and melting ice cubes until it finds one of the fallen doughnuts; this it seizes on, like a clumsy spider grappling
with its prey, crushing it between its fingers tighter and tighter.

‘Just take it easy,’ Ruprecht repeats, glancing over his shoulder at the window for a sign of the ambulance.

But Skippy keeps squeezing the doughnut till it has oozed raspberry syrup all over his hand; then, lowering a glistening red
fingertip to the floor, he makes a line, and then another, perpendicular to the first.

He’s writing. Painfully slowly – sweat dripping down his forehead, breath rattling like a trapped marble in his chest – Skippy
traces out syrupy lines one by one onto the chequered floor. E, L – the lips of the onlookers move soundlessly as each character
is completed; and while the traffic continues to roar by outside, a strange kind of silence, almost a serenity, falls over
the Doughnut House, as if in here time had temporarily, so to speak, stopped moving forward; the moment, rather than ceding
to the next, becoming elastic, attenuated, expanding to contain them, to give them a chance to prepare for what’s coming –

The overweight St Brigid’s girl in the booth turns pale and whispers something in the ear of her companion. Skippy blinks
up at Ruprecht imploringly. Clearing his throat, adjusting his glasses, Ruprecht examines the message crystallizing on the
tiles.

Skippy rolls his eyes and croaks.

‘I don’t know!’ Ruprecht gabbles, ‘I don’t know, I’m sorry!’ He bends down to squint again at the mysterious pink letters.

‘Tell her he
loves
her!’ the overweight or possibly even pregnant girl in the St Brigid’s uniform exclaims. ‘Tell Lori he loves her! Oh my God!’

‘Tell Lori you love her?’ Ruprecht repeats dubiously. ‘Is that it?’

Skippy exhales – he smiles. Then he lies back on the tiles; and Ruprecht sees quite clearly the rise and fall of his breast
gently come to a stop.

‘Hey!’ Ruprecht grabs him and shakes him by the shoulders. ‘Hey, what are you doing?’

Skippy does not reply.

For a moment there is a cold, stark silence; then, almost as if from a united desire to fill it, the diner explodes in a clamour.
Air!
is the consensus.
Give him air!
The door is thrown open and the cold November night rushes greedily in. Ruprecht finds himself standing, looking down at
his friend. ‘Breathe!’ he shouts at him, gesticulating meaninglessly like an angry teacher. ‘Why won’t you breathe?’ But Skippy
just lies there with a reposeful look on his face, placid as can be.

Around them the air jostles with shouts and suggestions, things people remember from hospital shows on TV. Ruprecht can’t
take this. He pushes through the bodies and out the door down to the roadside. Biting his thumb, he watches the traffic fleet
by in dark, impersonal blurs, refusing to disclose an ambulance.

Utah Terror : Utah Terror (9781101606971) by Sharpe, Jon
An Atlas of Impossible Longing by Anuradha Roy
Fiendish: A Twisted Fairytale by James, Meka
Keeping You a Secret by Julie Anne Peters
Five Days That Shocked the World: Eyewitness Accounts from Europe at the End of World War II by Best, Nicholas
Gertie's Choice by Carol Colbert
Secrets and Lies 6 (The Ferro Family) by H.M. Ward
Santa to the Rescue by Downs, Adele
Forest Fire by J. Burchett
A Possible Life by Sebastian Faulks