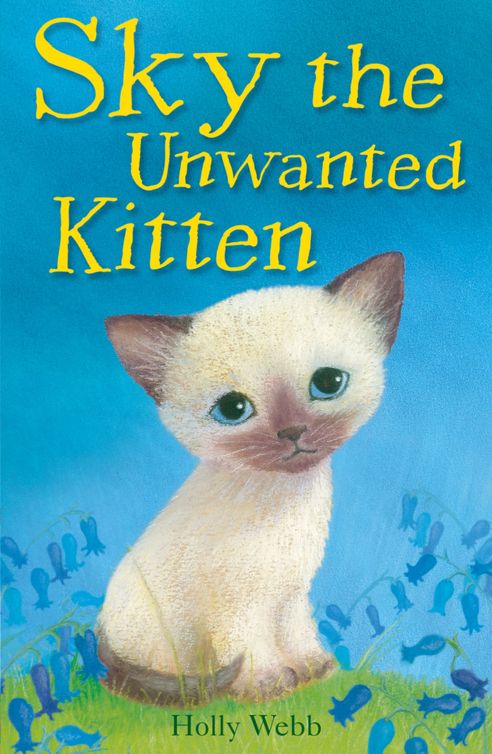 Other titles by Holly Webb: 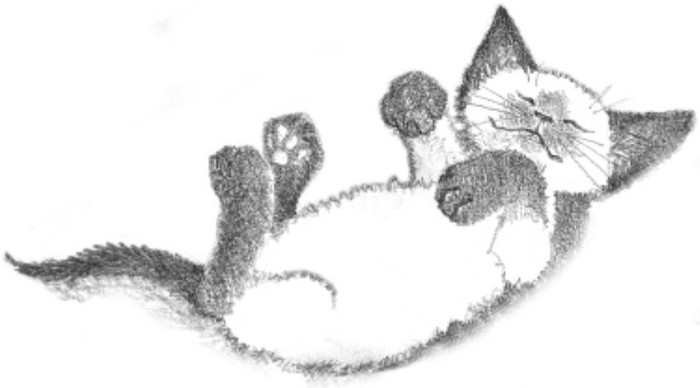 As the car started, Lucy pressed her face up against the window, staring sadly back at her home. Except it wasn’t her home any more. In a few hours’ time another family would arrive, and another removal lorry, just like the one that was lumbering down the road in front of her parents’ car. She blinked back tears as they pulled away,
staring back at Nutmeg and Ginger, the two friendly cats from the house next door. They’d been frightened away by all the fuss and bother of the removal men, but now they were back on their usual spot, the wall between Lucy’s garden and the one next door. They liked to sunbathe on the bricks, and Lucy loved to play with them and cuddle them and pretend they were hers. She longed to have a cat of her own. She had asked her parents so many times, but they always said she would have to wait until she was older.

The ginger cats stared curiously after the car. Lucy rolled down her window and waved to them. Nutmeg mewed, and walked down the wall towards the street. Lucy sniffed miserably.
She couldn’t believe she would never see them again. A few seconds later the car turned out of her road and she could no longer see the cats, or even the house. 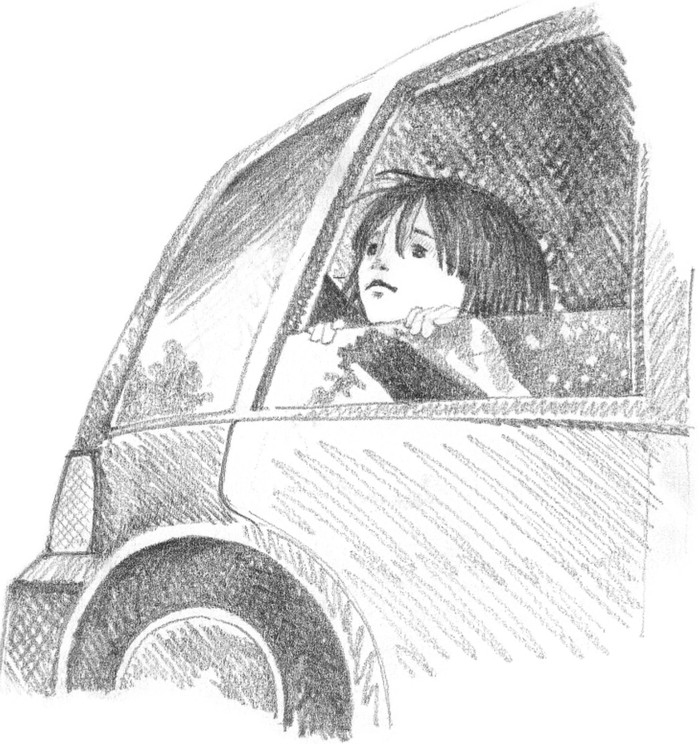 “How long till we get there?” Kieran, Lucy’s older brother, asked, unplugging his new iPod for a moment.

“A couple of hours, probably,” their mum said. “We should definitely be settling in by lunchtime!”

“Doesn’t it feel great, being on our way to our new home!” their dad added enthusiastically.

Lucy sniffed and said nothing. She clutched Stripy, her old toy cat, even tighter. They’d just left her home behind. What they were going to was only a horrible
house
. It would never, ever be home.

Lucy hardly spoke the whole journey. She just gazed out of the window, and worried to herself. A new house. A new school. No friends! She missed Ellie,
her best friend, loads already. Ellie would be in the middle of PE right now.
I wonder if she’s missing me too?
Lucy thought.

“We’re almost there!” her mum said excitedly, jerking Lucy out of her daydream, where she was back at school playing football with Ellie. “Look, Lucy, this is our street! Doesn’t it look lovely?”

Lucy made a small
mmm
sort of noise. It was nice. Pretty gardens and friendly-looking houses. But it wasn’t home.

“Oh good, the removal men are here already! Let’s start getting unpacked. I bet you two want to see your rooms, don’t you?” Dad sounded even more enthusiastic than Mum, if that was possible.

Lucy’s new room was huge – much bigger than her old one, as Mum had happily pointed out. “And you can have it any colour you like, Lucy,” she promised, placing a box of toys on the floor. “Maybe purple, what do you think?”

Lucy sat on the bed that the removal men had dumped in the corner, and gazed around, hugging Stripy. She was trying to be happy, but it was all so different.

The weekend flew past in a messy, grubby whirl of unpacking. Lucy felt left out – Mum and Dad were so happy about the move, and even Kieran
was excited about the new house. She seemed to be the only one who missed home.

Now the moment she was really dreading had arrived – her first day at her new school. Surely someone who’d just moved ought to get at least a week off school, not just one Friday, spent driving to the new house. Even Kieran had complained that it wasn’t fair they had to start their new schools today. Lucy trailed slowly across the empty playground after her mum, who was heading for the school office.

“Look, a school garden!” Mum said brightly. “And the sign says they have a gardening club. You’d love that, helping to plant seeds, wouldn’t you?”

“Maybe,” Lucy murmured. She saw a notice up about a football team, too, but there was no way she’d be able to join a team now, in the middle of term.
Everyone will already have their friends, and their gangs
, she thought unhappily.
I’m going to be so left out
.

The school secretary buzzed them in and took them over to Lucy’s classroom. The school was actually much newer and smarter than the one Lucy had been going to until three days before, but she wished she was back at her scruffy old school. She stayed silent as her mum and the secretary chatted about the new computer suite. Her mouth was drooping sadly as they arrived at class 5W, and the secretary showed them in.

Her new teacher, Mrs Walker, smiled kindly at her, then announced, “Class, I’d like you to meet Lucy. She’s just moved here, and I want you all to make her feel very welcome.” 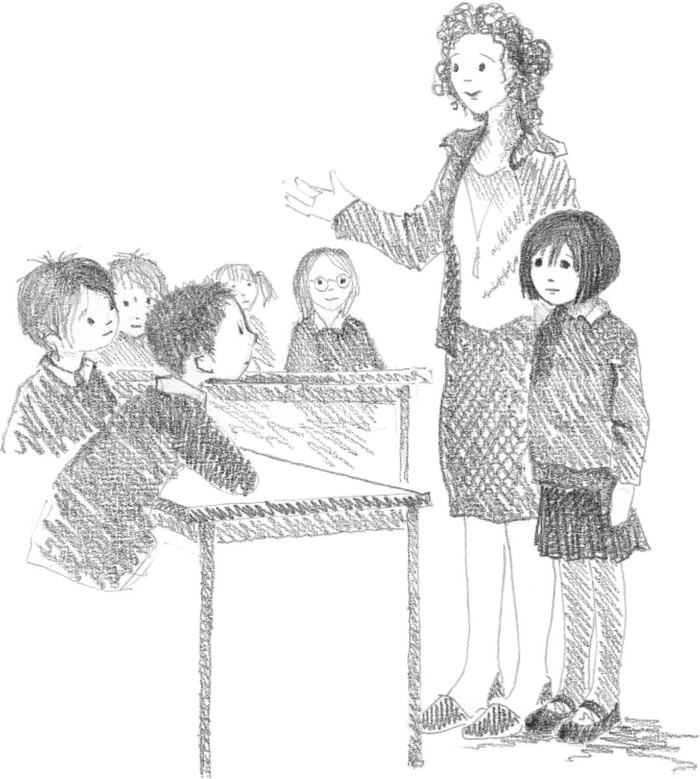 Lucy blushed and didn’t know where to look. She hated everyone staring at her. Mrs Walker then took Lucy to one side, and said the class had really been looking forward to having her and she knew Lucy would be very happy once she’d settled in.

Lucy wasn’t sure how she was supposed to do that – she’d never had to settle in anywhere before. She’d been to the same school since nursery, and she had known
everyone
.

“You sit here, Lucy, and Orla and Katie will look after you,” Mrs Walker said. “You’ll show Lucy where everything is, won’t you, girls?”

Orla and Katie nodded and smiled. “Hi, Lucy!” they chorused.

“Hello,” Lucy muttered, and sat
down as quickly as she could.

Orla and Katie tried their best, but Lucy was too shy to give more than yes or no answers to their polite questions. Eventually they gave up, and although they stayed with her all through the lunch hour, they stopped bothering to talk to her.
They don’t like me
, Lucy told herself unhappily, as she listened silently to Orla telling Katie all about her ballet exam.
No one’s even talking to me
.

Class 5W were actually quite a friendly group, but they couldn’t do much faced with a silent Lucy, and she was so unhappy that she couldn’t see that she needed to make an effort, too. Lucy was in the cloakroom putting on her coat to go home, when she heard
some of the girls talking about her. She stayed frozen where she was, hidden behind a coat-rack, and listened.

“That new girl is a bit strange,” someone said, giggling.

“Yeah, she hardly said a word all day.” Lucy recognized the voice of Orla, one of her minders. “I hope Mrs Walker doesn’t make us look after her tomorrow as well.”

“Perhaps she thinks she’s too good for us,” another voice suggested. “I’m glad I didn’t have to talk to her.”

“Yeah, she does seem a bit stuck-up,” Orla agreed.

Another girl from Lucy’s class who was on the same side of the cloakroom as her gave Lucy a worried look, and coughed loudly. There was a sudden
silence, then Orla’s head popped round the coats, and her eyes went
saucer-wide
. She shot back again, and there was a burst of embarrassed giggling.

Lucy stood up and stalked out, blinking back tears. So what if they didn’t like her? She certainly didn’t like
them
. She heard the girls start whispering very fast, worrying about her telling Mrs Walker what they’d said.
I hate this school
, she thought, as she brushed her sleeve across her face angrily, trying to pretend to herself and everybody else that she wasn’t crying.

“So how was your first day? Did you have a good time?” her mum asked eagerly as she met Lucy at the school gate.

“Oh, Lucy, I’m sorry.” Her mum looked at her anxiously. “I’m sure it’ll get better, honestly. You just need to take a few days to get used to everything.” She sighed, and then said in a cheerful voice, “I thought we’d walk back, it’s not far. Kieran wanted to go by himself, so you and I can see if we spot any nice parks on the way home.”

“Not there,
home
. I want to go back to our old house, and my proper school. I hate it here! No one likes me!” Lucy wailed. “I miss Ellie, and all my friends!”

Mum sighed again. “Lucy, your dad and I have explained this. We had
to move. Dad’s job is here now, and if we lived in our old house, he’d have to spend hours getting to work. We’d never see him. You wouldn’t like that, would you?”

Lucy shook her head, and sniffed, trying not to cry where loads of people from school would see her. “I know,” she whispered. “But it’s really horrible here.”

Her mum put an arm around her shoulder. “I know it’s hard, sweetheart. But I promise it
will
get better. We’ll just have to do lots of fun things to cheer you up.”

Lucy rubbed her sleeve across her eyes. She couldn’t believe she had to go back tomorrow.

Broken by Crane, Robert J.
Death of a Radical by Rebecca Jenkins
A Mother's Wish by Dilly Court
The Escapist by Fox, Madoc
It Must Be Magic by Jennifer Skully
Home (Running With Alphas Book 7) by Viola Rivard
Love in a Carry-On Bag by Johnson, Sadeqa
The Mysterious Ambassador by Lee Falk
The Stinky Sneakers Mystery by Beverly Lewis
Blonde Ambition by Rita Cosby