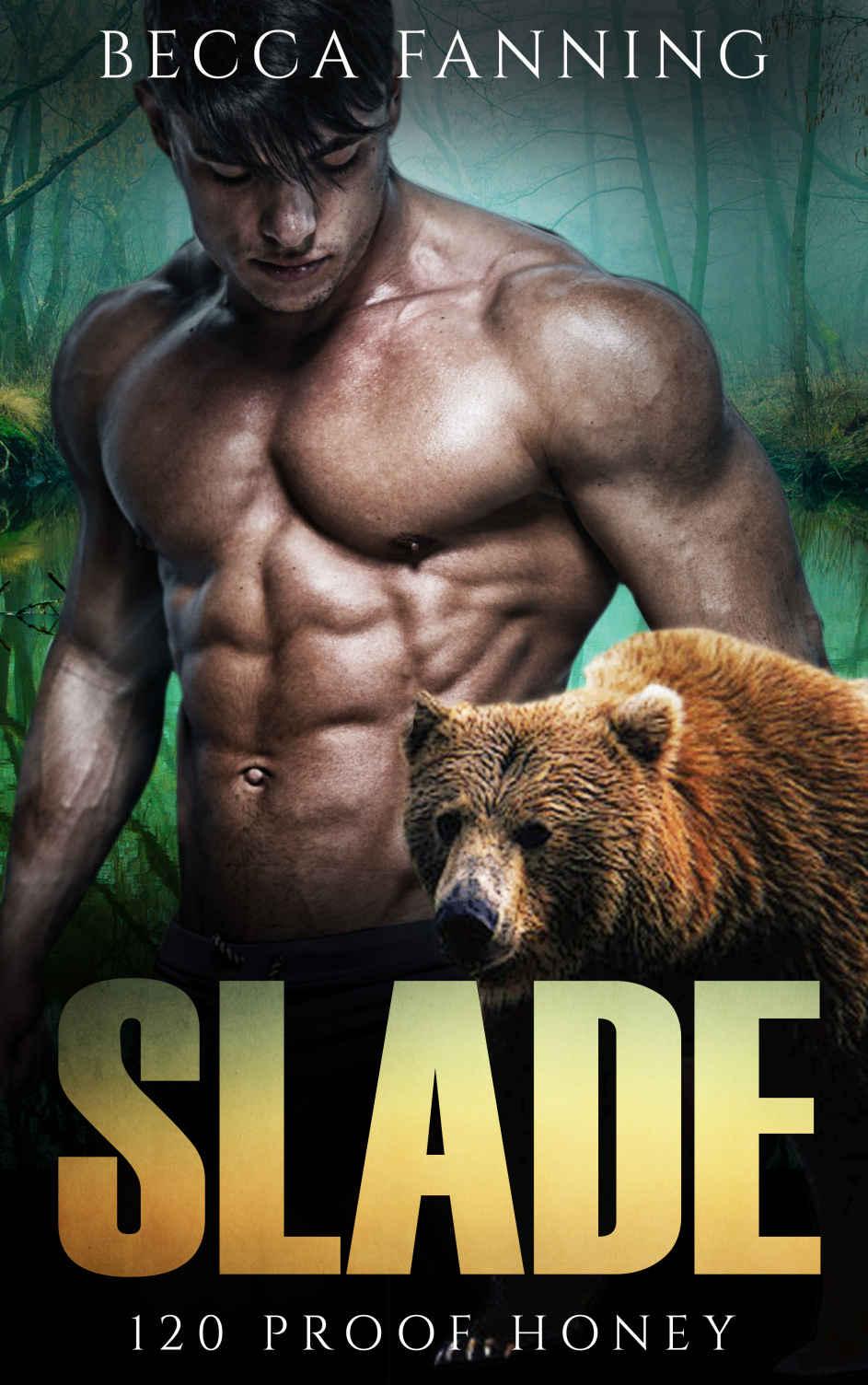 Thank you for supporting my work. I hope it’s as much fun to read as it was to write. This is the special Kindle Unlimited version of Slade. After you’re done reading it, you can continue to read every other story I have on Amazon. I’ve included them all for free for you. Just keep turning pages as long as you like.

Also, if you sign up to my newsletter, I’ll send you three exclusive stories that you can’t get anywhere else!

Slade Walker picked up his coffee mug and headed for the front door. The morning was already hot. The day would be a scorcher. He couldn’t wait to get back home after taking care of a few business tasks, and change into his bear form so he could run through the woods and feel the wind in his fur.

Today would be a boring day. He had to file some paperwork at the courthouse. Taxes, product information, and that sort of thing. This was the less fun part of his job, but at least it got him out of the house and into the city for a while. The Ozark Mountains were beautiful, but once in a while he liked to be around the tall buildings and congestion of the city.

He walked to his car, set his mug on the roof, and reached to unlock the door. But something wasn’t right. He walked to the front tire to inspect it more carefully. He set down his briefcase and bent to look closer. Yup. His tire wasn’t only flat as could be, it was damaged. Looked like someone had knifed it. He circled around the car to check the other tires, then cursed under his breath. All four, slashed.

And then he recognized the scent. It was the two of the women bear shifters in the area. The ones who’d been giving them nothing but trouble lately.

He’d have to take one of the guy’s vehicles. They had several between them. But as he walked from car to truck to car to check them, all he saw was flat tires. All slashed. They didn’t have a single vehicle undamaged, a single tire still holding air.

“What gives?” He stood in the doorway, looking like he was ready to head out himself in his suit and tie.

“Every vehicle, every tire, slashed.”

“You’re kidding.” Daxton pushed past him to run outside and see for himself.

Slade was standing in the doorway when he headed back. “It had to be them. I recognize the scent.”

Dax gritted his teeth and shook his head.

He hopped up the stairs, taking two at a time, and knocked on each door.

“Get up! Emergency meeting,” Slade called as he went.

He went back downstairs and paced in the dining room, waiting. Daxton sat in a chair, texting. One by one, the men came down until they sat at the table, looking up at their leader, who stood.

“This has gone on long enough,” Slade said, practically growling in his anger. “We tried taking it to the police and that didn’t work. It’s time for us to take action against these women. To show them who’s boss and what clan rules in this town.”

“What do you want to do?” Knox asked.

“I think we should just go kick their butts,” Beck said.

“Don’t be unreasonable,” Amir said. “We’ll just get ourselves in trouble doing that.”

Dax huffed. “Yeah, like they did? They kill our hive, set fire to our building, try to steal our business, and get off with nothing.”

“Must’ve been sleeping with the cops or something,” Knox said.

“Amir is right,” Slade said. “We have to start out by being reasonable. Let’s go over there and confront them. Maybe they just need to know that we’re not going to back down. They might have gotten off with no jail time, but that’s not the end. We’re not going to let it go.”

“And make them pay for the tires,” Dax said.

“What are we going to say to them?” Amir asked.

“We have to be intimidating,” Knox said.

Slade nodded. “Intimidating and forceful. We’ll make it clear that this is their final warning. We’ll demand they stop coming after us.”

“What about our vehicles? I have sales appointments today,” Dax said.

“Can you make some calls?” Slade asked. “Get some people out here to fix them?”

“I’m going to case the joint in a little while. Try to figure out who the leader is ahead of time so we’ll be prepared. I’d also like to get a look at their grounds and their honey processing building if I can. I want as much info going in as I can get.”

Slade nodded. “Sure. That’d be great.”

A little while later, Knox and Slade met in the living room to head out. They stripped down until they were wearing nothing, then walked outside and shifted. Whenever possible, they tried not to ruin their clothing. Sometimes they had to shift on the fly and it happened, but they went through so many shorts and shirts, it was crazy.

Slade loved the feeling of the transformation. He stood tall, stretched his arms into the hot air, then set them on the ground so he was on all fours. Knox did the same. They were all so used to the transformation, had been doing it so many years, it was now second nature. In the beginning, sometimes it took them a few moments to set their minds to change. But now, it was instant and almost no thought was required. It was as simple as wanting it, then the change started.

It was always his back first. The bones moved and shifted to form the back of a large bear, then the rest of his bones followed. It reminded him of going to the chiropractor, having his bones cracked and adjusted. It felt much the same. Then, somewhere toward the end of his bones moving and the skin loosening or tightening around his new skeleton, hair would pop out all over him, growing from his skin as if in a time lapse video. The last thing was the teeth and claws. They shot out of his mouth and paws, and he was now a fully-formed bear. From start to finish, the whole process took about two seconds.

They took off into the woods, running fast like they always did. They could run so much faster in bear form than human. The women’s clan lived many miles away. They tore through the forest, over a wide stream, scampered up part of a mountain. When they were close, they picked up their scent.

The best part about being a shifter and sharing a clan was the ability to share thoughts when they wanted to. Otherwise, communicating in bear form would be tricky.

When the scent grew thicker, they slowed. Who knew if the women were in bear form themselves, running through the woods. If the Walkers were smelled, the women would know it was them. Not only did they already know their scents from being on their property, but the bear shifters smelled different than natural bears. Their humanness left its mark, no matter what form their bodies were in.

They came to a large house. It was much prettier than theirs. This house was cream and white, the shutters painted with simple flowers at the edges, the porch clean and peaceful looking with a swing in one corner.

They had a good bit of land. Maybe not as much as the Walker clan did, but enough. They circled around the premise first, to get an idea of what was located on the property.

Besides the house, there was a barn. Horses were kept there, from the smell and sounds of it. There was another large building, unmarked. Perhaps their processing building? They had a few bee hives, a full garden of vegetables and herbs, and a few smaller ones full of bright flowers. Maybe Slade should have one of the guys’ girlfriends plant some flowers. It would be good for the bees anyway.

Slade was the last lonely bear. All of his clanmates and business partners had found love over the last year. He didn’t know how they managed it. Anytime he was anywhere near anything that looked like a relationship, it freaked him out. He never trusted any woman enough to share his secret, and if he dated anyone, he constantly worried she would find out. That somehow, he’d end up having to change in front of her. More than one of the Walkers had a tale like that. In the end, it had worked out okay for all of them. But Slade had been burned once, and he’d never lived it down.

When he was just barely twenty, he met a gorgeous woman and fell head over heels. They were madly in love, planned for marriage, the whole thing. He knew he had to tell her. He waited until the moment seemed right, took her outside and told her, then showed her. She’d been so freaked out, she left her engagement ring and never spoke to him again. The heartbreak had been so severe, it damaged him permanently. Never again would he put himself through that. He’d rather be alone. He was perfectly happy alone.

Knox nudged his shoulder with his head. Slade looked in the direction he indicated by jerking his head and saw that someone was coming out of the house. Two women walked outside. They paused to talk and while they stood there, three more came out. So there were five then. A common number for a clan.

As they watched, one in particular did most of the talking. She was taller than the others, had long, dark hair flowing down her back. She had to be the leader, then. The leader of a clan tended to grow a few inches taller, like Slade was taller than his guys.

They were out of ear shot, even for their extended bear hearing. He wanted to move closer to hear, but that would be too close. That amount of movement would be heard and noticed.

The Boy Who Plaited Manes by Nancy Springer
The Year of Fear by Joe Urschel
Fervor by Silver, Jordan
Nothing Bad Is Going to Happen by Kathleen Hale
THE DARKEST ANGEL by Gena Showalter
Thunder at Dawn by Alan Evans
George Stephenson by Hunter Davies
Owned By Her Alpha - Geno by Sophie Sin
Laura Meets Jeffrey by Jeffrey Michelson, Laura Bradley
The Only Ones by Aaron Starmer