Read Sleeping with the Fishes Online

Sleeping with the Fishes 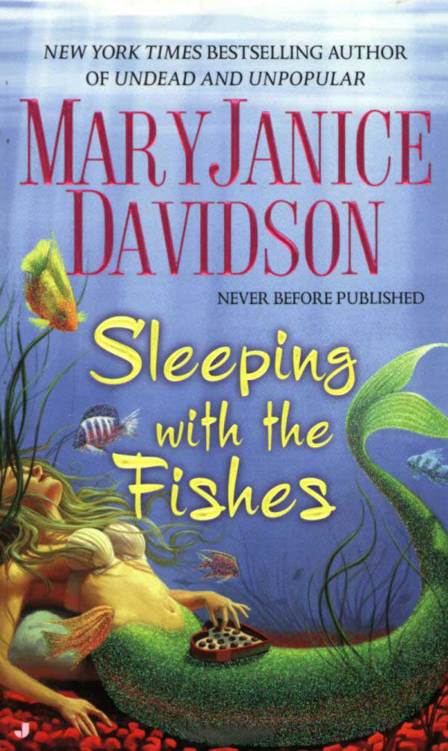 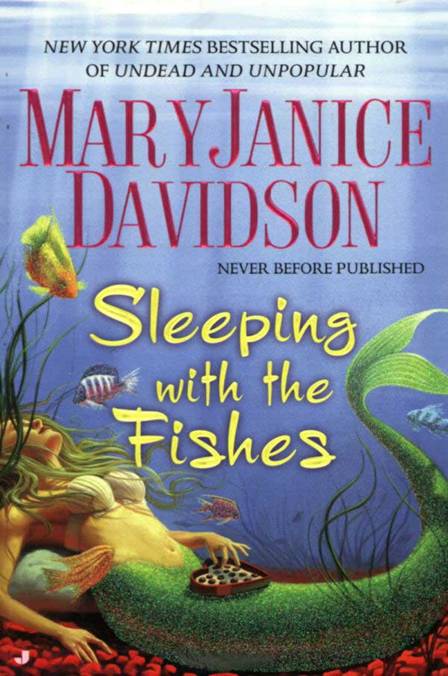 The unbelievable horror began, when Fred walked in on her parents making love on the living room coffee table. Like all children (even when grown), her first muddled impression was that her father was hurting her mother.
Or perhaps fixing her back.
Her second impression was that the coffee table books (
: The Last Frontier; Cape Cod: An Explorer's Guide;
The
Black Sea: A History)
must sting like hell on her mother's knees. Her third impression sounded something like this:

Her mother slipped and National Geographic's
Seals of the Antarctic
flew like a
tiddly
wink from the coffee table and hit the floor with a thud. Her father flinched but, unfortunately, did not fall off (or out of) her mother.

Fred darted across the room and, before she realized what she was doing, hauled her father off and
ossed
him over the back of the couch. She then yanked the puke-orange throw from said couch and threw it over her mother.

"
Ow
," her father groaned from out of sight.

Her mother wriggled under the throw, sat up, and faced her daughter, her normally pale face flushed with wrath. Or something else Fred did not want to think about. "
Fredrika
Bimm
, what do you think you're doing?"

"Freaking out.
Losing my mind.
Thinking about snapping your husband's spine.
Squashing the urge to vomit.
Wishing I'd died at childbirth."

"Oh, you say that when you don't get a prize in your Lucky Charms," her mother snapped. "What's your problem, miss? You don't knock anymore?" Her mother, a good-looking blonde with silver streaks and shoulder-length hair (and a disturbingly sweaty face), climbed off the coffee table with remarkable dignity, fastened the blanket to cover her chubby thighs, and went around the couch to help her husband. "You just barge in?"

"I have a key, I didn't barge," Fred pointed out, still revolted but regretting the violence. "And you told me to come over."

"Yesterday.
I told you to come over yesterday." "I was working." Fred tried not to whine, or stare. "I couldn't just ditch all the fish.
Although they deserve it, the little bastards.
Anyway, I couldn't come." "Well," her mother retorted, "neither could I." Fred again tried not to vomit, and succeeded for the moment. She peered over the couch, where her father was groaning and clutching the small of his back. His bald spot was flushed almost purple. His ponytail had come undone.
"Sorry, Dad."

"Not even if we're married for another thirty years."

"Fred, stop it!
You too, Sam."
Mrs.
Bimm
helped her husband to his feet and hustled him out of the living room. Then she turned on her daughter.

"Mom, put
yourself
in my fins."

"Mom, he was
fucking my mother
. He's a motherfucker! What would you have done?"

"Not tossed him halfway across the room," her mother snapped, then puffed her bangs out of her face. "What in the world is wrong with you? You're almost thirty, for heaven's sake."

Her mother stuck a stubby finger in Fred's face. Everything about Moon
Bimm
was short and stubby, compared to Fred's long lankiness. Even Fred's nose was long, and while Mrs.
Bimm's
mouth was permanently turned up in a smile, Fred's everyday expression was a scowl. If Fred hadn't seen the birth certificate, she would have doubted any birth relation to Moon
Bimm
.
"Violence.
Language.
Manners.
All unacceptable."

"I overreacted, okay? I'm sorry, all right?" "Not to me.
To your father.
Who is probably icing his back right this
minute.
"

"Hopefully he's put some pants on first." Fred looked around the small living room, which was artfully decorated in Cape Cod Tourist.
"Why here, Mom?
Why next to the
pleather
chair?
The La-Z-Boy?
Why not anywhere else?"
Why not never?
Never ever
?
"I mean… you've got a bed."

"We are often strongly affected in the living room," her mother said primly, then giggled (giggled!
O gods of all the seas, kill me now and make it snappy)
and marched out, trailing blanket fuzz behind her.

"It's not as bad as you think, Fred," the
Deftler
of Her Mother said, wincing when he moved the bag of frozen peas to better cover his lower back. He had, thankfully, put on pants. Said frozen peas were stuffed in back of said pants. Fred's mom was still prancing around in the couch blanket, all "nature's never wrong" and "be empowered, not embarrassed" and "you shouldn't cover up God's handiwork."

Is there anything sillier than a grown-up hippie?

"I'm sorry you had to catch us in an intimate moment—"

Fred groaned and looked around for a fork or a spoon or a gravy boat to gouge out her eyes.
And ears.
Because Moon
Bimm
was referring to the cardinal tattooed on her left butt cheek.
Other mothers had laugh lines and wrinkles. Not animal tattoos.

She rested her forehead on her hands, her blue hair brushing the table. She stared at the kelp-colored strands and thought,
That's
it. I'm running away for sure.
Again.
Twenty-nine-year-olds run away all the time. It's perfectly normal. It's
—

"Why," she muttered, "did you call me over in the first place?"
And why didn't I come yesterday, when she actually called
?

"Oh, that. Well…" Her mother fluttered about the kitchen, strands of the couch blanket making her look like a freaked out caterpillar. "We believe—your father and I believe—that is, Sam and I believe in full disclosure."

"So I see," Fred sniffed, eyeing the blanket.

"Lies and deception, they're a bad trip, honey. A
baaaa
—"

"You want to talk bad trips? Cast your mind back, Mom.
Your acid-fried mind.
Remember ten minutes ago?"

Moon
Bimm
ignored her daughter's sarcasm; she'd had almost three decades of practice. "Lies and deception, baby. They can make you physically ill. There's science to back this up,
hon
, People get ulcers and high blood pressure, just from keeping secrets! And—"

"Mom.
Will you cut to it, please? I have to go home and Clorox my eyeballs."

Fred kept staring at her hands.

"If you're adopting, why are you fucking?"

"Language," her father said, squirming on the chair and groping for the bag of peas.

Moon "children should be allowed to express themselves however they wish"
Bimm
focused on the sentiment, not the verbiage. "So lovemaking is only for procreation?"

"When it's your
mother
and your
father
, yes, love-making is only for procreation!" Fred screamed. She longed to toss the kitchen table through the dining room hutch. "I have seen some dark and wicked things, Mom and Dad, take it from me—you would not believe what lurks in the oceans' deep. I have seen a shark barf out another shark and then eat it again. But nothing I've seen was as bad as my mother and father—"

"Except I'm not your father," her father said.

"—as my mother and father—uh—doing dark and wicked things in the ocean. What?"

"Full disclosure," her mother said, dramatically swooping about the kitchen, blanket flapping. "All this paperwork we have to fill out for the adoption, it got me thinking. And it's time you knew the truth. Sam
Bimm
isn't your biological father."

Her mom sat down across from her and took Fred's cold (they were always cold) hands in her warm ones.

Even now, Fred took comfort from her mother's touch: how many times had those hands tucked her in, held her,
rubbed
her back? Her mom was like a walking, talking, jasmine-scented electric blanket.

"I know it'll take some getting used to," she said with touching earnestness. "And I'm sorry you had to live with the lie."

"And I'm so sorry I kept it from you!" Moon's hands plunged into her blonde hair and made fists; for a minute she looked like a seventies version of Mad Ophelia. "But there was a stigma, especially back then, and I couldn't go home and even though it was perfectly natural, even though it's what my body is for and it was beautiful and amazing, I was ashamed."

"And then there was Sam—"

"So, even worse problems?" Fred guessed.

Her mother frowned and continued. "And I was so happy to see him again and he—"

"—had a thing for knocked up blondes who puked in the morning?"

"Mom.
I appreciate you getting this off your chest and all—" Fred tried not to stare at her mother's boobs. Fred wished the woman
would
get something on her chest, like a turtleneck. "But I had that one figured out by the time I was five. Not, by the way, that it makes it any easier to pretend his tongue wasn't where it was ten minutes ago. But yeah, I knew."

Blood Hina by Naomi Hirahara
All That Is Solid Melts into Air by Darragh McKeon
India by V.S. Naipaul
JACKED by Sasha Gold
Eureka Street: A Novel of Ireland Like No Other by Robert Mclaim Wilson
The Spider Truces by Tim Connolly
Connecting by Wendy Corsi Staub
The Maclean Groom by Kathleen Harrington
El libro de las ilusiones by Paul Auster
Truth by Aleatha Romig