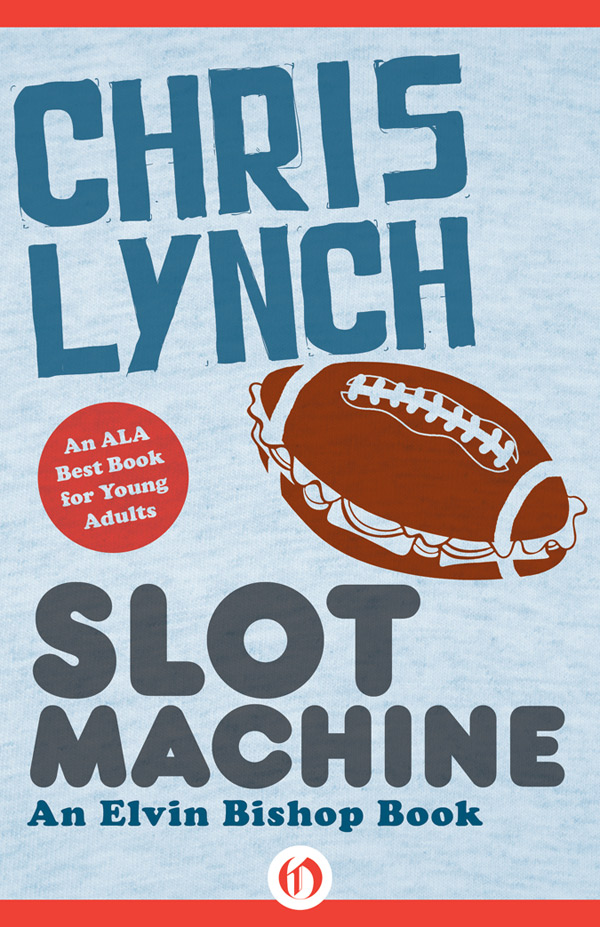 To Mikie Hunt, wherever the hell you are

Chapter 4: Take me out to the ball game, and pummel me.

Chapter 6: Some pain, some gain.

Chapter 8: Oh yes, my
other
family.

Chapter 11: Through the cracks of society.

A Biography of Chris Lynch

H
OW MANY FRIENDS DO
you need? Two. You need two friends.

There’s the big circle of people you know, some of whom you like and some of whom you don’t, which is fine. Then there’s the tighter circle inside of that, with the people you like a little more and also including the ones you dislike a little more, which is also okay. Then at the core there are the real ones, the friends who wind up meaning everything to you in the end, and this is tough, being so close, but worth it, and if you’ve got more than two you probably have too many.

Two was what I had. That’s what I wanted, and I wasn’t looking for anything more. I figured I was better off than most people, having two good friends.

We were on our way to The Camp. “Please, Elvin, please, stop reading the stupid brochure already,” Mikie said, snatching the glossy “Twenty-One Nights with the Knights” camp booklet out of my hands. Then he grabbed my neck, twisted my head so I was looking out the window at the evergreens whizzing by. “We’re on the
bus
, Elvin. We’re
going
, understand? It’s not like you’re still making up your mind.”

I didn’t fight him. I sighed. I stared. Fine, let him steal my brochure, I already had it memorized anyway:

A: We are the Knights, the flagship Christian Brothers Academy of the entire East Coast, representing the highest ideals and achievements of disciplined Catholic education.

Q: What is Twenty-One Nights with the Knights?

A: It is a leg up, a jump start, a fine how-do-you-do. It is a three-week camp for incoming freshmen, designed to ease their transition from junior high to the fast-paced world of high school, from young men to men. It is an introduction to the Knight Ethos, in which our students are welcomed into a tradition of excellence in education, spirituality, and athletics. It is where our students join our family. After attending Twenty-One Nights with the Knights, your first day at school in September will be not a journey into the unknown, but a homecoming.

Q: What will we do during our twenty-one nights?

A: You will have fun. We insist. We’ve designed a program of swimming, hiking, baseball, tennis... you name it. Invigorating. Thought-provoking. All in the idyllic rolling green hills of the St Paul’s Seminary Retreat Center. You will meet new friends you’ll keep for the rest of your life. You’ll have such a good time, you won’t even realize how much you’ve learned and how much you’ve grown until it’s all over. And when it is over, you’ll wind up feeling—as most of our men tell us—that Twenty-One Nights are just not enough.

“Twenty-one nights, Mikie,” I blurted, having kept quiet for as long as I was able. “Nobody’s supposed to do any one thing for that long. Couldn’t they just have a party or take us all to a Red Sox game if they wanted to get us together?”

“Here,” Mikie said, sticking the brochure back in my hand. “I’d rather have you reading the thing than talking about it anymore.”

Mikie was not concerned. He thought the camp idea wasn’t so bad. “Come on, El, what would we be doing anyway? Sitting around staring at each other all through July like we did last summer and the eight summers before that. Frankly, and don’t get all pissed off now, you get a little boring after about the second week.”

I got all pissed off.

“You’ll get over it,” he said, shrugging.

I popped a cookie and covered the rest of the package with my forearm. My mother had packed me an entire package of Nutter Butter cookies for the bus trip. Because I’m fat. Not hugely fat, like I’m about to have a baby, but moderately fat, like I just had one two or three months ago. The fat was a problem, but this was her way of saying the fat was yesterday’s problem, and maybe tomorrow’s, but the antisocialism was today’s problem, and if she had to toss a couple of barbecued chickens onto the bus and slam the door behind me, she’d do it. So I had the cookies. With Mikie being useless, the cookies helped.

“Then I’m stealing, huh?” he said as he took a cookie anyway.

Frankie was Friend One-A. Frankie was the kind of person who was just too beautiful to be anybody’s Friend One. He could have a personality like Mister Rogers—which anyway is about the opposite of the personality he does have—and still the long curly auburn hair, the puffy heart-shaped mouth, the gray patch that said he could have a mustache if he felt like it, the Bermuda-water green-blue eyes and the way-too-manly shape of his body, would always work against him. The thing that was different about my One and One-A friends was that the first was kind of low-key cool and cautious and the second made you feel like you were doing something wrong just to be with him. The thing that was the same about them was that they both did and said absolutely whatever they wanted to me.

Frankie reached over from the seat behind me, pushed my hand aside, and grabbed four more cookies.

“Listen to this, Elvin,” Frankie said with
my
cookie rolling out of his mouth. “You just don’t see this the right way. Look at it as an adventure, as a new experience, instead of the same old thing. While you’re sitting there mooning over the stuff you did when you were a
kid
, there’s a whole new world slipping away.”

I spiked a Nutter Butter into my mouth, then talked with crumbs shooting. “No, no, you guys don’t get it,” I said. “You’re the
kids
, remember? This is how it’s supposed to go: I tell you what a heartless beast my mother is, and—here’s the important part—whether I’m
right or not
, you’re supposed to say, ‘God, Elvin, raw deal. Parents suck.’”

Mike turned away from me; Frankie snatched another cookie from over my shoulder and sat back to enjoy it.

“It ain’t a kids’ camp anyway, it’s a
men’s
camp,” Frankie roared as the bus made a noisy lunge up a small hill. I turned halfway around in my seat so I could see both of them at once. “It’s all about man stuff, strictly for those of us who are, or
aspire
to be”—he wiggled his eyebrows up and down at me—“men, I think it’s a great idea. A
huge
idea. Like, the best idea ever. They’re going to make a
man
out of you, Elvin.”

“Right. That’s what they said in every prison movie and every war movie I ever saw.”

Mikie dropped into his seat, and we all stayed quiet for a few seconds.

Mikie sighed, and joined me as I pored over the camp brochure.

“That looks nice,” he said hopefully, pointing at a color photo of a bunch of boys playing a smiling game of volleyball next to a barbecue.

I was seeing something very different from what he was seeing.

“‘A COMMITMENT to excellence’... ‘The ideal setting to buffer the pain of transition for our fine young MEN’... ‘We STRONGLY encourage all our incoming freshmen to attend’... ‘A BONDING experience they will carry for a LIFETIME...’ Mikie, do you see this? I mean, what’s with all those capital letters? And how about that ‘
pain
of transition’ deal? All right? They already
know
it’s going to hurt. Am I the only one worried about this?”

Frank leaned over me again and stole another Nutter Butter. But he didn’t eat it. “Jesus, have a cookie, El.” He jammed it in my mouth and sat back.

Suddenly, the guy in the seat in front of me turned around. He was a box-headed mouth-breather with black eyebrows as wide and shiny as a Groucho mustache.

“I thought I smelled peanut-butter cookies,” he said, and helped himself. “Thanks.”

I looked down into my lap. I heard Mikie chuckle. Then I saw another hand in my Nutter Butters. I looked up to see Box-head’s seatmate. “Thanks,” he said, grinning.

I could feel myself turning red.

“They’re just screwing with you, Elvin,” Mikie said. “Don’t let them get to you.”

Frankie scooted up behind me and whispered in my ear. “You want me to stop him, El? You just say, and I’ll take care of it.”

I shook my head, waved him off.

“Yo, anybody want some Nutter Butters up there?” Boxy yelled. When everybody on the bus called back Yes, he turned to me again, reaching.

I covered up the package with my hands. “You know, maybe if you asked...” I said weakly. “If you just asked...”

The guy arched those unbelievable eyebrows at Mikie, then stood. He had to bend his beefy neck to keep his head from bumping the curved ceiling of the bus. “So, whatchu gonna do about it?” he asked.

Before Mikie could say anything, Boxy’s eyes moved to beyond us, where Frankie was standing. They stared at each other. “You wanna die, boy?” Box-head said.

“
Maybe
I’ll die,” Frank said, “but for
sure
you won’t be having another one of his cookies.”

I looked up toward the front of the bus, where the monitor was. He was looking at the situation but pretending not to.

“All right, sit down now,” Mikie said when things hung there all frozen. “This is stupid.”

“Hey, Elvin,” Frank said coolly, “think I could have another cookie?” I could hear the grin, even though I was no longer looking at him.

I passed the package back up over my head to Frankie. He took the whole thing; then I heard him sit down with it.

Box now looked even dumber. He was standing alone. I didn’t have the cookies. They were in the seat behind me, and if he wanted to get them, he had to be serious about going after Frank. Slowly, awkwardly, he slid back into his seat.

As I listened to Frank munching happily behind me, I buried my face back in the brochure.

The only thing we GUARANTEE is that you will carry this experience with you for the rest of your life.

Home Where Elvin Ought To Be

Retreat. That’s what they call this. Did you know that? It’s not a camp, it’s a retreat. They didn’t exactly define it so I looked it up in the dictionary. They may mean definition 3, “a place of seclusion or privacy,” or definition 4, “a period of retirement for meditation.” But since they’ve left it open, I’m going with definition 7, “to slope backward.” I’m comfortable with that.

I’m blossoming already here. Made new friends before I even got off the bus. The cookies were a great icebreaker.

How are those crab puffs, Ma? Puffy enough? Crabby enough? I feel so guilty gorging myself on these luscious liverwurst fritters while you suffer through back on the home front. Just say the word and I’ll have a bushel sent to you. Go ahead, just say the word. Go ahead. Say it, I said.