Read Snakes in Suits: When Psychopaths Go to Work Online

Snakes in Suits: When Psychopaths Go to Work 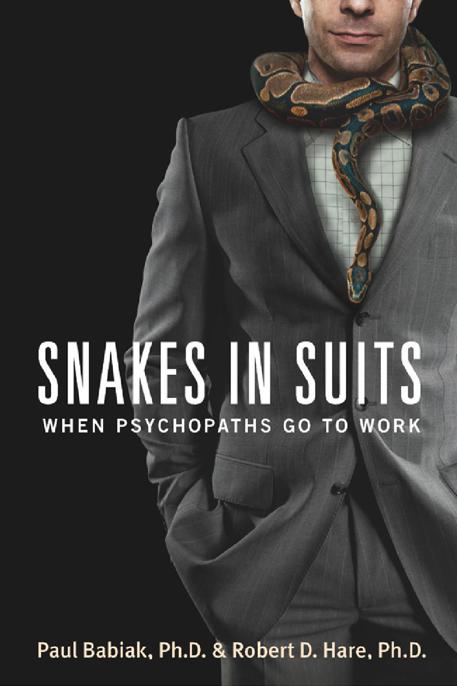 When Psychopaths Go to Work

In memory of Cheryl, and Paul

Act I, Scene I - Grand Entrance

1. Nice Suit. Would a Snake Wear Such a Nice Suit?

2. Who
Are
These People?

Act I, Scene II - Off and Running

4. Psychopathic Manipulation: How Did He Do That?

6. Pawns, Patrons, and Patsies: Roles in the

7. Darkness and Chaos: The Psychopath’s Friends

8. I’m Not a Psychopath, I Just Talk and Act Like One

9. Enemy at the Gates

11. The Fifth Column: Psychopaths in Our Midst

Act V, Scene III - The Rise and the Fall

About the Author
s

Most workers are honest, loyal, law-abiding citizens, concerned with making a living, contributing to society, and raising a family in a fair and just world. Others, though, are more selfish, concerned only about themselves with little regard for fairness and equity. Unfortunately, there are some individuals in the business world who allow the responsibilities of leadership and the perks of power to override their moral sense. A rise in the number of reports of abuse in major corporations should not be a surprise, given the increased access to unrestricted power, resources of startling proportions, and the erosion of ethical standards and values.

Some who have faltered may have experienced a weakened moral sense of “right” in the face of excessive temptation and easy access to power. Others may feel justified in reaping the rewards in proportion to the size of the organization they lead, arguing that their extravagances seem excessive only to those who have little hope of being so rewarded. Still others have embraced the self-serving mantras that

even desirable. But another group exists, one whose behaviors and attitudes are potentially much more destructive to the organization and its employees than those noted above who are motivated by greed or big egos. This group, the subject of this book, displays a personality disorder rooted in lying, manipulation, deceit, egocentricity, callousness, and other potentially destructive traits. This personality disorder, one of the first to be described in the psychiatric literature, is psychopathy.

A dozen or so personality disorders have found their way into the psychiatric nomenclature. What makes psychopathy unique is that its defining characteristics and traits often lead to behaviors that conflict with the generally accepted norms and laws of society. Some people with psychopathic personalities are in prison because of their crimes against people and property. Others are in prison for committing economic or white-collar crimes, such as fraud, embezzlement, or stock manipulation. These are crimes against businesses and institutions, as well as the employees who work in them.

In addition to the problems their abusive behaviors cause to spouses, friends, and family members, individuals with a heavy dose of psychopathic traits are potentially harmful to professional relationships. For example, their grandiosity, sense of entitlement, and lack of personal insight lead to conflict and rivalry with bosses and coworkers, and their impulsivity and “live in the moment” philosophy lead them to keep repeating these and other dysfunctional, antisocial behaviors, despite performance appraisals and training programs. Many experts believed that these traits alone make it difficult for psychopaths to have successful long-term careers in industry. At least that was the conventional wisdom until we did our research.

One might think that conning or bullying traits in a job applicant would be so obvious to employers that such candidates would not be hired for important jobs, especially those where the ability to get along with others is critical. One might also think that abusive, deceitful behavior toward coworkers would eventually lead to disci-Preface

plinary action and termination. But, based on the cases we have reviewed, this often is not the case.

There are four possible reasons for this. First, some core psychopathic personality traits—we might call them talents—may seem attractive in job applicants, and contribute to their success at being hired. For example, psychopaths can be very charming, able to talk their way past even the most seasoned interviewers. When it is to their advantage, they can display a charisma that can disarm and be-guile even the most wary individuals. Just as those who have unwittingly married a psychopath find themselves trapped in a web of deceit, abuse, and pain, so too can a company make a faulty hiring decision and find itself with a serious problem on its hands down the road. Psychopaths are skilled at social manipulation, and the job interview is a perfect place to apply their talents.

Second, some companies quite innocently recruit individuals with psychopathic tendencies because some hiring managers may mistakenly attribute “leadership” labels to what are, in actuality, psychopathic behaviors. For example, taking charge, making decisions, and getting others to do what you want are classic features of leadership and management, yet they can also be well-packaged forms of coercion, domination, and manipulation. Failing to look closely beneath the outer trappings of stereotypical leadership to the inner working of the personality can sometimes lead to a regrettable hiring decision.

Third, the changing nature of business itself is also a contributing factor to the increase in psychopathic persons being hired. “Bureaucracy” as a business model evolved early in the last century to address the problems inherent in coordinating and optimizing the efforts of large numbers of people who were performing many interrelated job functions. As business competition became more sophisticated, these support systems became more complex, and their supporting infrastructure grew in size. As a result, bureaucracies typically employed a large number of people, had multiple processes and procedures, and were expensive to run. These characteristics earned them a reputation for being almost too big to be effective.

Since then, organizational structures and processes have evolved considerably, with the most dramatic changes taking place during the early 1970s and 1980s, the beginning of what may be called “the organization wars.” During this time corporate takeovers, acquisitions, mergers, and breakups led to great social and financial upheaval in the business world. The desire to create sleek, lean, efficient companies was a good one, and long overdue in many industries.

Eventually, in order to survive, many companies shed their old-style, bureaucratic policies and structures for a flatter, more free-form, faster-paced organizational environment. During the 1990s, this new, “transitional” organizational style—fewer layers, simpler systems and controls, more freedom to make decisions—became the norm. In fact, change became a matter of business necessity and economic survival. Competing successfully now required the quick generation and movement of new information. Speed and innovation were now more important than keeping track of what was already old news.

With the need to embrace change came a switch from hiring

“organization men and women” who would maintain the status quo to hiring individuals who could shake the trees, rattle cages, and get things done quickly. This hiring switch inadvertently led to the selection of some individuals with psychopathic traits and characteristics. Unfortunately, the general state of confusion that change brings to any situation can make psychopathic personality traits—

the appearance of confidence, strength, and calm—often look like the answer to the organization’s problems. Yet, hiring individuals with these traits seemed like the right thing to do. Egocentricity, callousness, and insensitivity suddenly became acceptable trade-offs in order to get the talents and skills needed to survive in an accelerated, dispassionate business world.

Fourth, psychopathic individuals, known for ignoring rules and regulations, coupled with a talent for conning and manipulation, found these new, more flexible organization structures inviting. The temptation for someone with a psychopathic personality to join a
Preface

new, fast-paced, competitive, and highly effective “transitional” organization, especially one with few constraints or rules, is too great, and the personal rewards too significant, to be ignored. The effect of these things is that psychopaths are more attracted to work for businesses that offer fast-paced, high-risk, high-profit environments.

It is very important to understand how and why the psychopath so readily manipulates people and organizations, given the increasing financial and social risk to companies wishing to survive in a chaotic business environment filled with uncertainty, constant change, and increasing regulation. In addition to financial harm to a company and its shareholders, there are also personal dangers to coworkers.

There is the risk to the careers of those subjected to the emotional or physical abuse of a psychopathic coworker. For example, senior executives may find their authority and security severely compromised by the “high-potential” management candidate moving up the ranks.

Covert attacks and defensive maneuvers waste valuable time and energy that could otherwise be focused on creativity, productivity, and profitability. In addition, bruised leadership egos and lowered morale are much harder to measure but can lead to large declines in organizational performance.

Unfortunately, even an organization with sophisticated hiring and promotion practices would find it challenging to defend itself against these “corporate cons.” Even loyal coworkers—firsthand witnesses to much of the psychopath’s machinations—do not always understand what is happening. And, when some do raise the red flag, they may find that no one at the top responds to it.

This book evolved out of our growing realization that lack of specific knowledge about what constitutes psychopathic manipulation and deceit among businesspeople was the corporate con’s key to success. The scientific literature on the behavior of criminal psychopaths is extensive but geared to the forensic scientist and clinician. We hope to close some of the gaps in the current understanding of psychopaths among the business readers by using nontechnical language and case studies. We want to provide the reader with the
x

experience of working next to a corporate psychopath by presenting the kinds of real-life situations we’ve encountered in our work. Because a psychopathic coworker can harm your career in seen and un-seen ways, we hope that this knowledge will prepare you to defend yourself in the future.

The premise of this book is that psychopaths do work in modern organizations; they often are successful by most standard measures of career success; and their destructive personality characteristics are invisible to most of the people with whom they interact. They are able to circumvent and sometimes hijack succession planning and performance management systems in order to give legitimacy to their behaviors. They take advantage of communication weaknesses, organizational systems and processes, interpersonal conflicts, and general stressors that plague all companies. They abuse coworkers and, by lowering morale and stirring up conflict, the company itself. Some may even steal and defraud.

Cathedral of Dreams by Terry Persun
Granted Wishes (The Granted Series Book 1) by Tanya Vought
The Cygnet and the Firebird by Patricia A. McKillip
My Soul to Save by Rachel Vincent
Flowers for My Love by Katrina Britt
Sophie and the Locust Curse by Davies, Stephen
Seacrets by Wingate, Adrianna
La llamada by Olga Guirao
The Dragon Throne by Michael Cadnum
The Last Year of Being Single by Sarah Tucker