Read Some Like It Perfect (A Temporary Engagement) Online 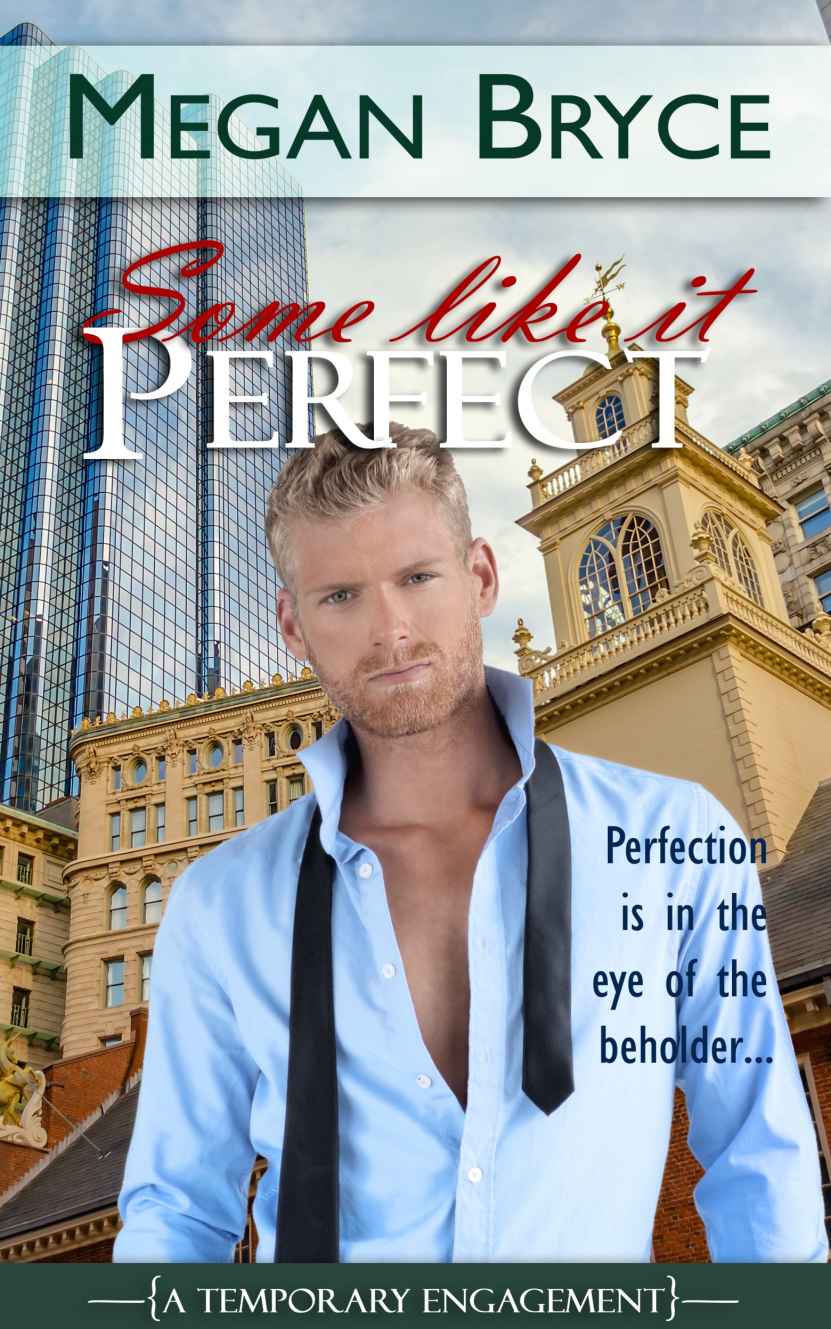 Delia Woodson’s fledgling business has one paying customer. And even if he is perfectly boring, beggars can’t be choosers. But sometimes she can’t help but play with him a little, to liven things up. She just never expected him to join in the game.

Jack Cabot is finding out firsthand that no one shakes things up like a red-headed hippie. Trouble is, he’s starting to like his life a little shaken at the edges and can’t imagine going back to life before her. . . He just can’t seem to talk her into staying.

Delia Woodson was desperate. That’s why she’d agreed to it.

Because she was a painter, no one was buying her paintings, and she was desperate.

She had bills to pay, food to buy. Someday she might actually want to live in her own apartment instead of on her friend’s couch.

Justine propped her hip against the kitchen counter and said, “Are you going?”

“Painting a ceiling is not beneath you.”

Delia said, “I’m painting clouds and baby-faced angels on an executive’s ceiling. I’m happy for the work. I’ll be happy for the money. It is beneath me.”

“You could go get a real job.”

Delia stared at the ceiling. If she was going, and despite what she’d just said she hadn’t quite talked herself into it yet, she probably needed to get up. Get dressed.

Delia said, “How do you get up and put on a suit and go to the office every morning? I don’t know how to make myself do it.”

“I get roaring drunk every evening. That’s how I do it.”

Delia looked over at her. “Tonight?”

“Of course. We’ll have to celebrate your first paying job in Boston.”

“Which means you’d better get up so you can pay for it.”

Delia stared at the ceiling. A ceiling she wasn’t going to paint. She said, “Rip-roaring drunk?”

“The rip-roaringest drunk two thirty-six-year-olds can get without feeling like losers.”

Delia slid one leg off the couch and let her whole body follow bonelessly to the floor. She said, “Too late. I feel like a loser and I’m not drunk at all.”

She crawled to the bathroom, her head hanging, every movement slow and tortured.

Her friend said, “You’re thirty-six, not sixteen. Go put on your big-girl panties and pretend you’re an adult.”

Delia stood. She straightened her shoulders. She didn’t sigh again, she didn’t slam the bathroom door. She would be an adult. Because doing crap you didn’t want to do was what being an adult was all about.

And hey, maybe she’d get hit by a bus on the way.

She could always hope.

By the time Delia made it downtown, her mood had improved. She loved this city. Loved the accent, loved the history. Loved the cobbled streets.

She’d even enjoyed the commute. Enjoyed getting pulled along with busy people late for work.

Granted, it was fall. The gorgeous yellow and red leaves crunched satisfyingly under her boots, and the air was chilly but not miserable.

She’d yet to experience a New England winter, and maybe she’d change her mind about this whole Boston thing come the middle of February, but for now it was fun. It was different.

She got pulled up the subway stairs and she went with the flow until fresh air hit her face again. She stared up at a tall, new building with gleaming glass windows and her shoulders sunk.

But there was money. And uptight business execs.

Delia rode the elevator to the top. She stopped to look out the full-length window and wondered why those who had these kinds of views didn’t stop to look. Too busy making money to enjoy what it brought them, she guessed.

And, she knew, repetition dulled the splendor. Beautiful and awe-inspiring turned to normal turned to invisible.

At least, that was her hope. For someday. You know, when people bought her paintings.

Mr. Cabot’s scary efficient secretary nodded when she saw Delia. The secretary rose, motioning Delia to follow her into the double-doored office.

Ms. Charles said, “The scaffolding was delivered and set up yesterday; the paint is here as well. Mr. Cabot is in a meeting this morning; now would be the time to organize.”

They’d already argued about this. Delia had lost.

Mr. Cabot didn’t want to vacate his office; had in fact, wanted her to paint at night when he wasn’t there.

Delia had only won that argument because she couldn’t paint at night. She needed natural light. She needed to paint in the light her work would be seen in. Call her a prickly artiste all you want, it didn’t change that fact.

She was hoping he’d decide to move on out once he got a whiff of the paints.

Delia surveyed the office. It was as big as Justine’s one-bedroom apartment, half of it cleared of furniture and covered in painter’s cloth. The large desk was still sitting in front of a floor-to-ceiling bookcase on the other side.

The secretary handed her a check and said, “Please don’t bother Mr. Cabot. If you need anything, come to me.”

Oh, Delia was going to bother Mr. Cabot. She wouldn’t be able to help it.

She’d never met the man and he already bothered her. You didn’t get to sit in this office unless you worshiped at the altar of efficiency and squeezed blood out of stone.

But Delia nodded at the secretary and watched her leave. She looked down at the check and decided she wasn’t selling her soul. She was doing what had to be done. There could be pride in that.

Then she took off her coat, rolled up her sleeves, pulled booties on over her boots, and started opening paint cans.

She organized, tested colors on the ceiling, and finally began to see in her mind what the ceiling would look like. By the time she had started rolling out the base coat, she thought she could make this ceiling something decent. Instead of a clichéd nod to the master.

The door opened behind her and a deep, annoyed voice said, “What are you doing?”

She didn’t turn around, just kept painting. “Base coat. I hope the fumes don’t bother you.”

She didn’t smile but it took effort.

She turned then and said, “They open?”

And then her stomach clenched and she forgot how to think.

He was beautiful. Put together by a master, his light brown hair streaked with gold, his brown eyes framed by long lashes. His nose was straight, his jaw strong and sculpted.

His body was toned beneath his dark suit. Not too musclebound, not too skinny. Just right.

But he wore an expression of disdain as if everything he saw did not meet with expectations, and since he was looking right at Delia, she could guess what she looked like.

Red corkscrews would be waving wildly around her head. Her hair could be tamed but it took a
long
time and a
lot
of effort and she’d made peace with it years ago. Paint spattered clothes that even without the paint wouldn’t have looked like much. It was hard to get into fashion when you didn’t have much money and everything you owned eventually got paint on it anyway.

Delia didn’t care much what she looked like, her paintings showed the world who she was, but next to him she felt unkempt.

Next to him, Martha Stewart would feel unkempt, so she laid the blame where it was due. At his feet.

He said, “How long will this take?”

She’d only ever met with the scary efficient secretary before this and suddenly Delia was missing her.

She said, “It will take less time if I don’t have to work around you.”

He sat down behind his desk and waved behind him at the bookcase. “This bookcase was built in this room, it doesn’t fit through the doors. And every time my mother redecorates my office, I move out. Every time I move the contents of this bookcase, something goes missing. I’m not moving it again.”

Delia stared at him, her eyebrows knitted together. “Why does your mother redecorate your office?”

“So, again, how long will this take?”

Delia looked up at the ceiling. “I was hired to paint the whole thing. It’s going to take a while.”

When she looked back at him, his eyes were closed, his face pained.