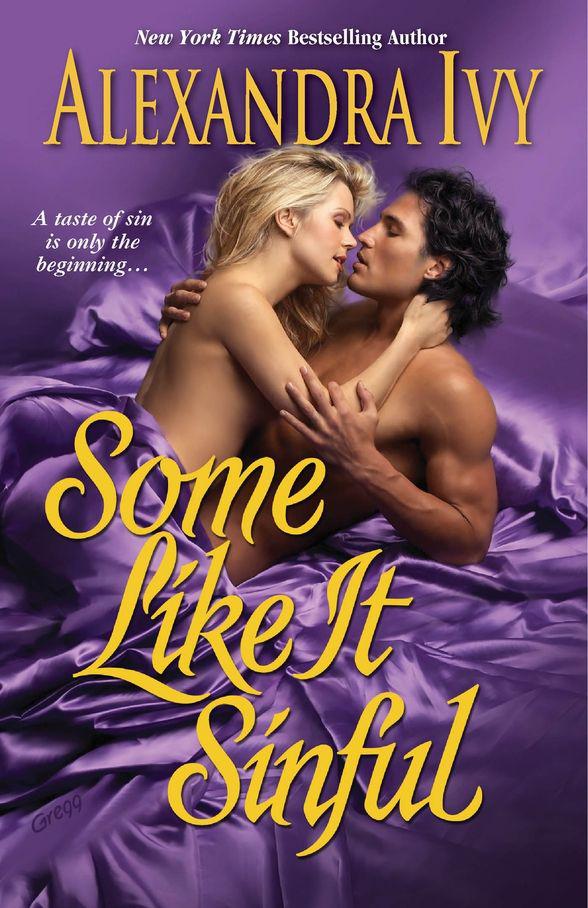 A TASTE OF SIN
“Clara . . . my sweet angel . . . I want to taste of you,” he husked, holding her gaze with smoldering need. “Will you allow me?”
She touched the tip of her tongue to her lips, the unwitting motion clenching the muscles of his thighs.
“Taste?”
“I want to kiss you.”
“Why?”
“Not everything has a reasonable explanation, Miss Dawson. Indeed, there are some things that should be left a mystery.”
“Such as kisses?”
“Such as kisses.” He stepped until her soft curves were pressed to his own. Still holding her face in his hands, he lowered his head until he was a breath from her lips. “Give me leave, Clara. I will not steal what should be offered freely.”
“Yes,” she at last whispered. “Yes.”
With a groan he softly touched her lips, fiercely reminding himself she was an innocent. Certainly there was passion enough beneath her proper manner, but she had no experience with the darker desires. He must take care not to startle her with his hunger.
Unfortunately, his silent lecture did nothing to prepare him for the satin sweetness of her mouth. Barely sweeping over her lips, he gasped as a flood of pleasure surged through his body.
He had expected to enjoy her. A lot.
But this . . . this was magic . . .
Books by Alexandra Ivy
Guardians of Eternity
WHEN DARKNESS COMES
EMBRACE THE DARKNESS
DARKNESS EVERLASTING
DARKNESS REVEALED
DARKNESS UNLEASHED
BEYOND THE DARKNESS
DEVOURED BY DARKNESS
BOUND BY DARKNESS
FEAR THE DARKNESS
DARKNESS AVENGED
HUNT THE DARKNESS
The Immortal Rogues
MY LORD VAMPIRE
MY LORD ETERNITY
MY LORD IMMORTALITY
The Sentinels
BORN IN BLOOD
Historical Romance
SOME LIKE IT WICKED
SOME LIKE IT SINFUL
SOME LIKE IT BRAZEN
And don’t miss these Guardians of Eternity novellas
TAKEN BY DARKNESS in YOURS FOR ETERNITY
DARKNESS ETERNAL in SUPERNATURAL
WHERE DARKNESS LIVES in THE REAL
WEREWIVES OF VAMPIRE COUNTY
And look for this Sentinel novella
OUT OF CONTROL in PREDATORY
Published by Kensington Publishing Corporation
Some Like It Sinful
ALEXANDRA IVY