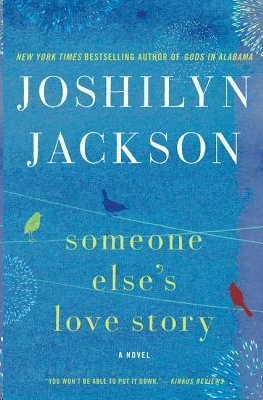 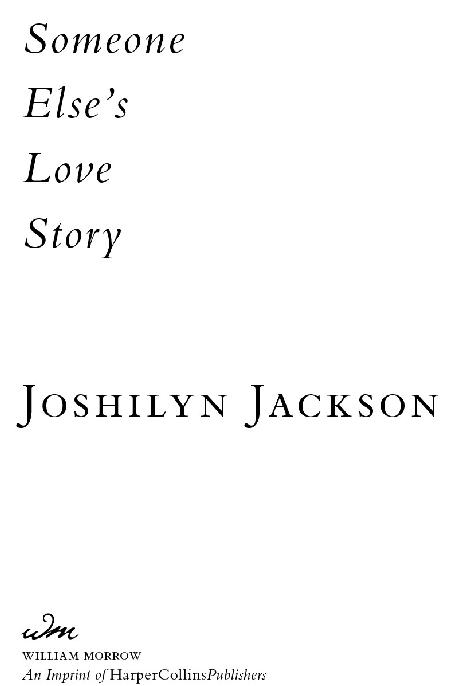 For Bobby Jackson, who married the right girl, and Julie Jackson, a custom job

“Hope” is the thing with feathers—

That perches in the soul—

And sings the tune without the words—

And never stops—at all—

Huge (and oddly long-standing) thanks to my sharp-eyed, canny editor, Carolyn Marino—I met her when my very first novel was at auction. What an unmitigated pleasure to work with her at last! I have such deep-set gratitude to everyone at William Morrow for the warm response to my work, especially Liate Stehlik, Lynn Grady, Tavia Kowalchuk, Ben Bruton, Mary Ann Petyak, and Amanda Bergeron. As always, I must thank my wonderful agent, Jacques de Spoelberch.

A few years ago, at the Vermont College of Fine Arts, I heard poet Robin Behn read her glorious and earthy poem “It Is Not Always Possible to Fall in Love in Blackberry Season.” Her poem’s incantatory female voice evokes a pair of lovers, addressing the woman as
you
.

Rereading it obsessively, I started imagining a man who might speak
to
a woman in this way. The result was Walcott, a young male poet whose history and personality would let him write comfortably in such lush and visceral terms about his female lover’s sexuality as well as his own. Robin Behn kindly allowed me to put a few lines of the poem that spawned Walcott into Walcott’s mouth, but the poem is absolutely hers, and was first published in the inaugural issue of
TAB: The Journal of Poetry & Poetics
from Chapman University. You can read the piece in its entirety on my website at joshilynjackson.com/behn.

Walcott should write a poem celebrating the patience and kindness of genetic counselor and researcher Dawn Jacob Laney, MS, CGC, CCRC. William would not have been possible without her.

And not just Dawn—this book is full of cops and crime and chemistry and genetics and forensics and Judaism and nuns and many other things outside of my direct experience. The following human beings deserve better poems than I could write for being invaluable fonts of information. Any stupid mistakes are mine.

I cannot function as a human, much less as a writer, without the following four posses:

My reader posse: That’s pretty much you, Person Who Bought This Book. You are letting me keep this job I love. Thank you. If you’re one of those passionate and miraculous bookstore hand-sellers or big-mouthed, wonderful readers who recommend my books to other people, then I feel so warmly toward you, we should probably make out a little. You are directly responsible for this book, for good or ill. Thank you doesn’t cover it.

My writer posse: These people have, for years now, consistently and lovingly slapped me into being better and braver, on the page and off. They are each an essential nutrient, so I list them in alphabetical order: Anna Schachner, Caryn Karmatz Rudy, Karen Abbott, Lydia Netzer, Reid Jensen, and Sara Gruen.

“Faith” is a fine invention

When Gentlemen can see—

But Microscopes are prudent

I
fell in love with William Ashe at gunpoint, in a Circle K. It was on a Friday afternoon at the tail end of a Georgia summer so ungodly hot the air felt like it had all been boiled red. We were both staring down the barrel of an ancient, creaky .32 that could kill us just as dead as a really nice gun could.

I thought then that I had landed in my own worst dream, not a love story. Love stories start with a kiss or a meet-cute, not with someone getting shot in a gas station minimart. Well, no, two people, because that lady cop took a bullet first.

But there we were, William gone still as a pond rock, me holding a green glass bottle of Coca-Cola and shaking so hard it was like a seizure. Both of us were caught under the black eye of that pistol. And yet, seventeen seconds later, before I so much as knew his name, I’d fallen dizzy-down in love with him.

I’ve never had an angel on my right shoulder; I was born with a pointy-tailed devil, who crept back and forth across my neck to get his whispers into both my ears. I didn’t get a fairy godmother or even a discount-talking cricket-bug to be my conscience. But someone should have told me. That afternoon in the Circle K, I deserved to know, right off, that I had landed bang in the middle of a love story. Especially since it wasn’t—it isn’t—it could never be my own.

At eleven o’clock that same morning, walking into gunfire and someone else’s love story was the last thing on my mind. I was busy dragging a duffel bag full of most of what I owned down the stairs, trying not to cry or, worse, let my happy show. My mother, never one for mixed feelings, had composed herself into the perfect picture of dejection, backlit and framed in the doorway to the kitchen.

I wanted to go, but if I met her eyes, I’d bawl like a toddler anyhow. This tidy brick bungalow on the mountainside had been my home for seventeen years now, ever since I was four and my parents split up. But if I cried, she’d cry, too, and then my sweet kid would lose his ever-loving crap. We’d all stand wailing and hugging it out in the den, and Natty and I would never get on the road. I tightened my mouth and looked over her head instead. That’s when I noticed she’d taken down the Praying Hands Jesus who’d been hanging over the sofa for as long as I’d had concrete memory. She’d replaced him with a Good Shepherd version who stopped me dead in the middle of the stairs.

He was super pretty, slim and elegant. He was backlit, too, standing in front of a meadow instead of a kitchen, cradling a lamb instead of a spatula. My mother had never once gone into direct sunlight without a hat and SPF 50, and this Jesus shared her ivory-bloom complexion. I looked more Jewish than he did. They had the same rich brown hair glowing with honey-gold highlights, the same cornflower blue eyes cast sorrowfully upward to watch me struggle a fifty-pound duffel down the stairs. Neither offered to give me a hand.

Mimmy wasn’t anywhere near ready to let me go, and the thought of having to fight my way out of here made me want to flop down onto my butt and die on the staircase.

“Please don’t make this awful. This is the best thing,” I said, but Mimmy only stood there, radiating lovely sorrow. The pretty my mom has, it’s an unfair amount. Simply ungodly, and it worked on everyone, even me sometimes.

“Maybe for you,” she acknowledged. “But Natty?”

That scored a hit; I was trading Mimmy’s mountain full of trees and deer and sunshine for my dad’s three-bedroom condo, sleek and modern, bang in the middle of the city. But all I said was, “Oh, Mims.”

We’d been having this fight all week. Dad’s condo was ten minutes from the Georgia State campus, and from Mimmy’s, I drove about four hours round-trip. I had to register my classes around Atlanta’s rush hour and make sure they all met either Tuesday/Thursday or Monday/Wednesday/Friday. This was enough to make a simple coffee date an exercise in logistics, and Mimmy didn’t help my social life go easier. She’d been boycotting anything with a Y chromosome for going on seventeen years now. Even her cat was female, and she’d been known to change my shifts at her candy shop if she knew I had a date. I would’ve moved to the condo long before if my stepmother, Bethany, had ever let my father make the offer.

She hadn’t. Not until last week, when the results of Natty’s tests came back. Dad had set them up after Natty taught himself to read. The tests said my kid was rocking an IQ north of 140, which put him firmly in the genius category. My three-year-old could probably apply to freakin’ Mensa.

Bethany—Bethany herself, not Dad—called to tell me I could have the condo. This was unusual. Bethany was the heavy who told me I was getting uninvited from Passover because her entire family was coming and the dining room table only had so many leaves. A few days later, Dad would do something huge and beautiful and thoughtful for me, as if these events were wholly unconnected. But this time, Bethany had wanted to talk to me badly enough to dial Mimmy’s house phone when she missed me on my cell. A risky move. Mimmy and Bethany were matter and antimatter. Contact between them could trigger a blast that would knock the planet clean off its hinges and plummet us all right into the sun.

Luckily, I was the one who picked up. We had the briefest exchange of cool politenesses, and I waited for her to drop whatever awful bomb she’d primed this time. She cleared her throat and delivered what sounded like an overrehearsed monologue:

“So! Given Nathan’s unusual intellect, David wants to help you place him at a more academically focused preschool. We understand how limited the choices are out there in the weeds.”