Something Witchy This Way Comes: A Jolie Wilkins Novel 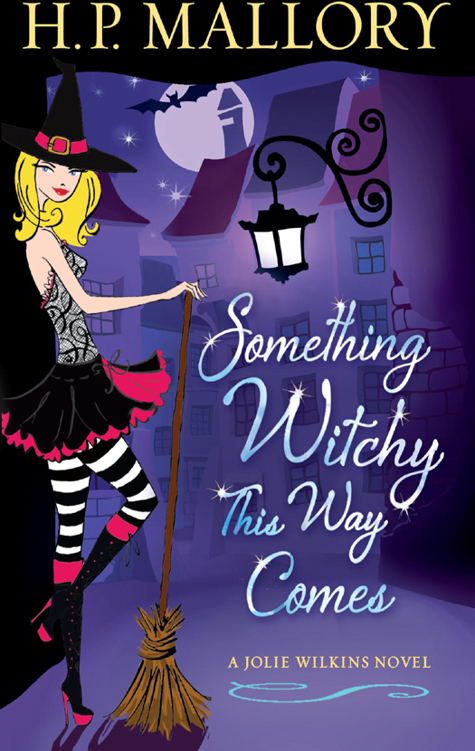 “Mallory’s writing is fun, and her protagonist is smart, giving this book an edge. The author does a great job of keeping the pace until the final pages, where twists are turned and questions answered. Keep your eye out for more in this entertaining series.”

“Mallory’s strong-willed, sharp-tongued, and extremely fallible heroine; an unusual take on necromancy; and a surprising ending make this an enjoyable read.”

“I was immediately sucked into the story from the very first page.… A perfect novel to start with if you haven’t read the rest of the series because the author gets you caught up to date on what has happened so far.”

“Light, fun, and interesting as well as drama filled and suspenseful … The ending of this fabulous book will leave you wanting more and I am so excited I found a new author to look out for! Go grab this series today and be prepared to laugh your butt off.”

“H. P. Mallory is amazingly gifted.… All of her characters, both primary and secondary, are memorable, and the story is humorous and engaging. It held my attention from page one.”

“This book in three words: Thrilling, Witty, Amazing!
Now that I gave you 3 words to describe this book, let me give you a few more. This book is an emotional roller coaster ride that will take you through twists, turns, action, romance, danger and mystery. Just when I thought I had it all figured out, H. P. Mallory hits us with an ending that we never saw coming!… UNPUTDOWNABLE.”

Something Witchy This Way Comes
is a work of fiction. Names, characters, places, and incidents are the products of the author’s imagination or are used fictitiously. Any resemblance to actual events, locales, or persons, living or dead, is entirely coincidental.

B
ANTAM
B
OOKS
and the rooster colophon are registered trademarks of Random House, Inc.

Excerpt from
The Witch Is Back

I blinked a few more times, and even then my vision was still cloudy, like I was just waking up with a massive hangover in a room bright with sunlight. I covered my eyes with my hand, trying to ward away the garish attack of light, hoping that my sense of hearing might help me figure out where I was. But my heart was beating so fast, it sounded like waves crashing into my ears.

I dropped my hand from my eyes and forced myself to focus, to concentrate on the scenery around me so I could get some sense of where I was and what had happened. Once I was able to make out the rocks that interrupted the otherwise deep blue ocean before me, I realized it wasn’t my heart that was echoing through my ears at all, but the actual waves. I glanced down at my shoes and took in the sand, feeling the sea breeze as it whipped around my ankles and caused me to shiver involuntarily.

I felt like I was moving in slow motion as I turned to face Rand. His dark brown eyes showed his concern
for me as he smiled, and his dimples made him appear almost boyish. His deep chocolate hair was tousled, as if he’d just awakened from a restless night. He was breathtakingly beautiful, as always. At the sight of him, something warm began to grow within me and I recognized the feeling—relief melded with love.

If Rand was here, I was safe.

But the question remained: Where exactly was I?

I swallowed hard, trying to bridge the gap that was growing in my mind. I’d been home in … Los Angeles only moments ago and now I was … now I was …

I glanced around again, at the beach and then behind me. I took in the craggy hillside that led up to pastures of heather, dotted with enormous pine trees and a three-story white mansion, the plaque of which proclaimed itself to be
KINLOCH KIRK
. Somehow, the title resonated with me and carried me to a place in my mind that I hadn’t visited in a while.

Kinloch Kirk is the home of the Queen of the Underworld
, I told myself.
It’s my home
.

“We’re back in Scotland,” I whispered to Rand as I faced him again, the dawning realization forcing the clouds from my mind. He said nothing, just nodded and reached for me, engulfing me in his strong arms. I leaned my head against his chest and inhaled his spicy, masculine scent, relishing the feel of his embrace.

It was a woman’s voice—austere and calculating—and I knew it well. I turned to face the prophetess,
Mercedes Berg, who stared past us, her mouth angry. The prophetess was the highest of all the witches and also the Queen’s chief ambassador,
my
chief ambassador. But what struck me was how upset she was that her plan hadn’t succeeded. Actually, it had been a complete fiasco.

And that was when it all came back to me, like someone had just pumped memory juice directly into my brain.

Mercedes had broken the rules of time by sending the vampire Sinjin Sinclair two years back in time to meet me before I ever became Queen … hell, before I was even aware that I was a witch. And Sinjin’s purpose? To get to know me before Rand did, thereby ensuring that I would never fall in love with Rand, which is what truly happened. Sinjin had wanted me to fall in love with him instead, and as much as I now hated to admit it, he’d succeeded.

But luckily for me, Rand hadn’t given up. A gifted warlock, he had recruited the help of Mathilda, a fairy. They’d traveled back in time to beat Sinjin at his own game. Why Mercedes had orchestrated the whole thing, I still didn’t know. And why had Sinjin agreed to it? Well, I also didn’t know for sure, but I did have my suspicions. He undoubtedly wanted the promise of power that went along with being the paramour of the Queen of the Underworld.

At the sound of Sinjin’s voice, I felt something within me constrict. I had to fight the feeling, though, because I’d promised myself I would get over him.

I refused to look at him. The power of his betrayal still felt like a knife in my back. Instead, I faced Mercedes
and felt anger riding up my throat. She appeared so nonchalant, almost indifferent, as if sending Sinjin back in time and royally screwing up my life was no big deal. She acted like it was no more serious than if she’d just stepped on an unfortunate beetle.

“And apparently you failed,” Mercedes said, facing Sinjin with an expression that was none too friendly. I didn’t miss the fact that Sinjin had no comeback. But I still refused to look at him.

“Why did you do it?” Rand demanded of Mercedes. He took a step toward her, his shoulders tight. She turned away from him without answering. “Why the bloody hell did you do it?” he repeated, and his voice was rough, his English accent more pronounced and heated with his anger. I was suddenly afraid of a possible confrontation between the two of them.

“You must not doubt the prophetess,” Mathilda suddenly piped up from behind me. I turned to face her, in surprise, not having realized she was present. The oldest and wisest of the fae, Mathilda was slight, barely four feet tall. Her long, silvery hair flowed around her body. When I looked at her, I sometimes couldn’t tell how old she was. She’d told me a long time ago that each person’s perception of her was different—they see her however they choose to see her—apparently my confused mind was unable to distinguish her age.

But back to the time-travel thing … Right before Mercedes sent Sinjin back in time, I was looking for my cat, who had escaped from the house. Instead of finding her, I stumbled across Mercedes as she was performing a time-traveling charm on Sinjin. It was on the beach, just below the bluffs of Kinloch Kirk.
Knowing it wouldn’t be long before everything I knew was whisked away from me, I used my telepathic connection to warn Rand—who was miles away at the time—about Mercedes’ intentions. Then, boom! When I woke up, it was two years in the past, in Los Angeles. I was completely unaware of the fact that I was officially Queen of the Underworld. Truth be told, I hadn’t even met Rand or Sinjin because they had yet to venture into my life.

To make a long story short, Rand, Sinjin, and Mathilda were able to return to the present. (I hadn’t traveled back in time to begin with, so I didn’t have to make the trek back.) I was surprised that everyone had returned to the same place—right here on the beach where Mercedes had first sent Sinjin on his merry way into the past. I wasn’t sure why, but I had guessed that upon returning, each person would reappear wherever he or she had departed. Well, clearly that wasn’t the case. ’Course, I also couldn’t say I understood the hows and whys about time travel, so maybe I shouldn’t have been surprised.

“Damn not doubting her,” Rand raged.

“I had but one goal,” Mercedes answered in her same level tone, fixing her gaze on Rand and then on me.

“What was it?” I asked, my voice sounding hollow and drained, which wasn’t surprising considering everything going on around me.

“I made the decision to ensure the safety of our Queen and sovereign,” Mercedes finished, raising a brow at Rand as if to say,
How can you argue with that?

“Her safety against what?” Rand asked as he wrapped his arms around me, pulling me close. It seemed as if just the very thought of a threat to my safety bothered him.

Mercedes didn’t alter her straight-lipped expression. Instead, she stared at him vacantly for about two seconds. “The Lurkers,” she finished succinctly. “Sending the Queen back in time would give us another two years to train her in an environment free of Lurkers.” I was about to respond when she held up her hand. “I never told you, Jolie, but I could sense something was coming, something dangerous.”