Read Song of the Road Online

Song of the Road 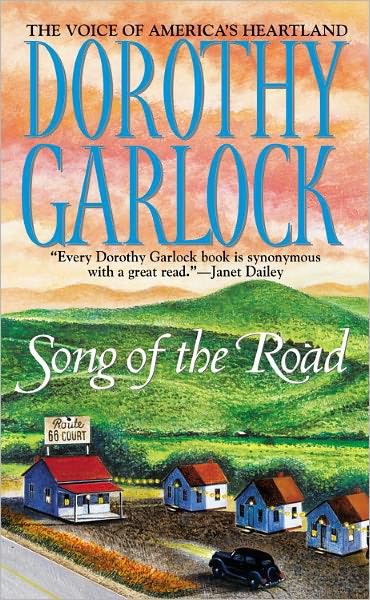 If you purchase this book without a cover you should be aware that this book may have been stolen property and reported as “unsold and destroyed” to the publisher. In such case neither the author nor the publisher has received any payment for this “stripped book.”

This book is a work of historical fiction. In order to give a sense of the times, some names or real people or places have been included in the book. However, the events depicted in this book are imaginary, and the names of nonhistorical persons or events are the product of the author’s imagination or are used fictitiously. Any resemblance of such nonhistorical persons or events to actual ones is purely coincidental.

“Bestselling Garlock’s endearing characters and vividly depicted milieu will enchant her legions of readers. Garlock’s claim, ‘I write to entertain my readers,’ is fully validated with this suspenseful romance.”

“
Mother Road
is a colorful personalization of a highway and the people who work and play along its byways. Garlock captures the work ethic and spirit of Americans during the Depression years with understanding.
Mother Road
is a novel of tribute to the common men and women of that era.”

“Delightful. . . . This is a story that reminds us that dreams do come true.”

“An entertaining cavalcade of characters. . . . Garlock, known for her heartwarming Americana, does not disappoint here . . . a heart-throbbing romance.”

“No one evokes the Depression like Garlock. . . . A great, hopeful read.”

For my children: Lindy and Herb Jr.

When you were teenagers

and going over Fool’s Hill,

I feared that you would never

amount to a hill of beans.

The bus bumps along on Route 66,

Its wheels warning, “Girlie, you’re in a fix.”

No husband to help me — he never did.

Would he be happy I’m carrying his kid?

I can sleep on this bus, sick of staying alert,

Watching my back so’s I don’t get hurt.

Someone in Cross Roads means trouble for me;

He set me up once, but who can he be?

Home, “where the heart is”— after you roam.

Home, where the pain was that sent us away.

Home, where we never wanted to stay.

W
HEN THE BUS SLOWED
to turn off the highway at Cross Roads, Mary Lee was the only passenger awake. Or so she believed. It was hard to tell about the man across from her. He had climbed on at Amarillo. In the brief time it took him to find a seat, she had seen that he was tall, lean and unsmiling, with a level, direct gaze.

Now he sat sprawled in the double seat, his head back, his hat covering his face, awkwardly trying to sleep on a seat designed only for sitting. He seemed vaguely familiar, and she wanted to keep looking at him.

Mary Lee’s worry for the last hour had been that she might throw up. The lurching, swaying vehicle and the fumes from the motor were a combination she’d had to endure since she got on the bus in Tulsa. Now she had a throbbing headache, her back hurt and her stomach was queasy as well.

Thank God, the journey was almost over.

Before the bus came to a complete stop at the station located in the lobby of Roads Hotel, the cowboy was up and standing at the door. She didn’t know why she knew he was a cowboy. Boots and Stetsons were worn by most of the men in New Mexico whether they were bankers, bootleggers or ranchers. The distinction lay in the quality of the Stetsons and the boots.

The lights came on in the bus, and the door folded back. The cowboy bounded down the steps while Mary Lee was gathering up her purse, hat and a small sack that contained the last of the crackers and cheese she had brought along to munch. She stepped off the bus onto the dark street illuminated only by the street lamp on the corner and the light coming from the hotel lobby. When she looked up and down the street and saw no one, her shoulders slumped. She moved wearily to the side of the bus and waited for the driver to remove her suitcase from the luggage compartment.

“Here ya are, ma’am. It’s pretty heavy for ya to be carryin’. Got someone meetin’ ya?” The driver had obviously observed her condition.

“No, sir. I was intending to leave it here at the station. I’m going out to the Cross Roads Motor Court. I know I can’t carry it that far.”

“I’ll be goin’ right by there. Get back on, ma’am, and I’ll stop and let ya off. I ain’t supposed to, but ya ain’t ort to be walkin’ out there this time a night.”

“Thank you. I was dreading the walk. It’s been a long ride from Tulsa.”

The driver set the suitcase inside the bus and went into the hotel. Mary Lee got back on and sat down on the front seat. She was so tired that her legs were trembling, her nerves were raw, and she feared that given the slightest provocation she would burst into tears. Her mother had surely received the letter saying she would be arriving on the eleven-thirty bus. She had mailed it over a week ago.

It would be strange going home to the motor court when her father was not there. She blinked away the tears that came to her eyes. Six months had passed since she received word that he had died suddenly while shoveling snow, and at times she couldn’t believe that he was really gone.

She had not been able to come to the funeral. The little money she made at the five-and-dime had covered the rent with not much left over for food. She couldn’t have arrived there on time anyway. He had died on a Thursday, and her mother had had him buried the following Saturday.

Now her husband, Bobby, was gone as well. Poor, weak Bobby, killed in an alley behind a beer joint. What a waste of a young life. Gambling was his passion. If he thought he had a good hand and had nothing else to bet, he would wager his life. He seldom drank, but the police said that he was drunk when they found him. The police didn’t hold out much hope of finding his killer, and it wouldn’t do her or Bobby any good if they did.