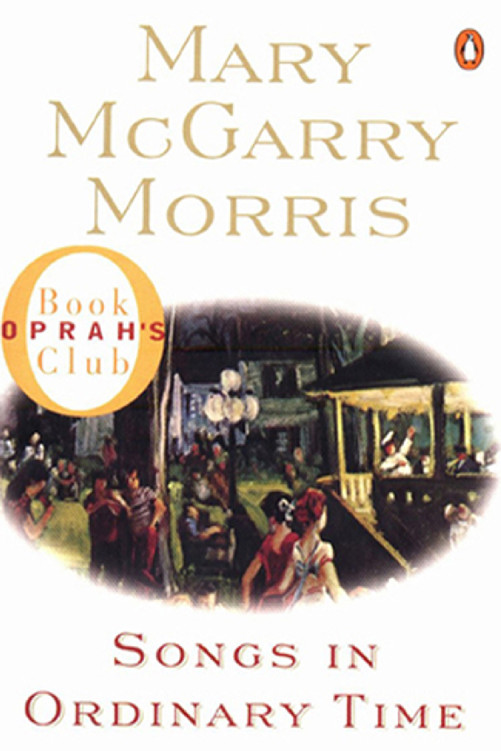 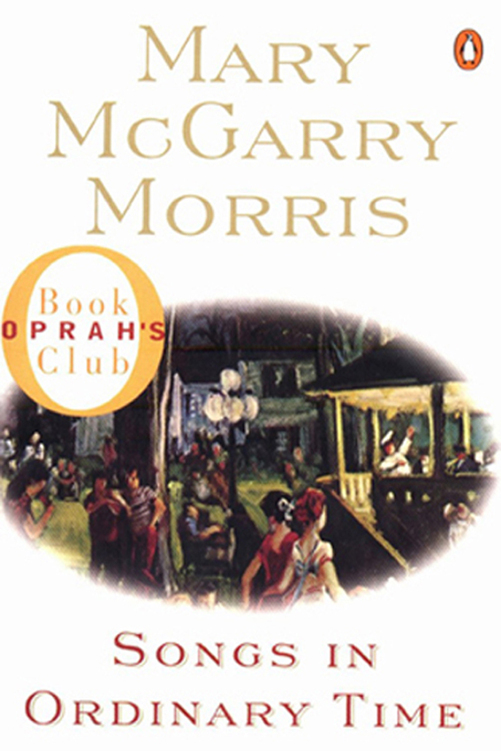 Praise for
Songs in Ordinary Time

“Morris seems merely to have been sharpening her skills when she wrote
Vanished
…and
A Dangerous Woman
. Now she has brought all her gifts to bear on
Songs in Ordinary Time
…. The flowing sentences and scenes make every page worth reading.”

“Morris weaves the taut strands of her plot with remarkable skill…. This novel becomes more powerful as one reads, building to a heart-stopping denouement.”

“
Songs in Ordinary Time
is real life cruising small-town USA with the top down and the volume up. In her graphic, stiletto chapters, Mary McGarry Morris is a cross between Elizabeth Gaskell and David Lynch.”

“A grand sweep of a novel: Morris, like a contemporary Dickens, creates a world teeming with incident and character, often foolish, even nasty, but always alive.”

dilemmas seem as real as the reader’s own. The book is alternately touching and sinister, but it resonates with authenticity. At every moment, it is all too familiar and real.”

Mary McGarry Morris is married and the mother of five children. She lives in Massachusetts. She is the author of four novels:
Vanished
, which was nominated for the National Book Award and the PEN/Faulkner Award;
A
Dangerous Woman
, which was made into a major motion picture;
Songs in
Ordinary Time
, an Oprah Book Club selection; and
Fiona Range
, coming soon from Viking.

This is a work of fiction. Names, characters, places, and incidents either are the product of the author's imagination or are used fictitiously, and any resemblance to actual persons, living or dead, events, or locales is entirely coincidental.

THE LIBRARY OF CONGRESS HAS CATALOGUED THE HARDCOVER

O
n the day that Duvall came Benjamin Fermoyle was twelve. In a year he had not grown an inch or gained a pound, and no one had noticed.

He was not sick, but fixed, immured in the vastness time becomes when you are twelve, when a month’s events can flash by in a day, when certain days, certain hours, even moments can seem to last, to go on and on and on for weeks, indeed forever.

Untouched, and for days on end, ignored, he was not a child and not a man. His only friend was six-year-old Louis, who lived next door. At home he had the television with its tears and love and death, lives he could turn on and off at will, much in the way he mastered his own existence, perceiving himself as a kind of image lodged in the airwaves of visible space somewhere between stars and rooftops, a voiceless speck that by the touch of a button or a word might be summoned, briefly, safely. It was in his dreams that he felt most threatened, so often lately pursued by the relentless drumbeat of dark footsteps and the warmth that oozed sticky and shameful and nameless, and always so unexpectedly, that he did not dare sleep in pajama bottoms, but in a towel, the same towel by morning hidden damp and wadded behind the bureau, then taken out again at night and wrapped stiffly coarse around his hairless groin and thighs.

It was late May on the day that Duvall came. It had been a raw, rainy spring in those mountains, where spring was never a season proper, so much as a narrow passage, a blink of the eye, a flicker of light from ice to green, where even in the valleys every bud, sprout, and shoot held so tight and fast that it seemed certain nothing more could ever bloom or thrive again. Nothing.

Omar Duvall had been in Woodstock the night before he came down over the mountain into Atkinson. He had sat in his car that last cold night, sleepless and shivering as he waited across the street from the little jailhouse, its white paint shimmering in the moonlight. How many times had he turned the key, countless, countless times, ready to flee, but then stayed instead, went on sitting, shivering, waiting, and did not know why. Later, he would tell how he had heard summer’s first cricket. In here, he would say, striking his breast. It was a stirring, he said, feeling it before he heard it, and then had not really heard it at all, he would insist, but had felt it; no, not even felt it, for it was like a heartbeat, and who ever hears the beat of one’s own heart, much less the beat of another’s, he would say, his piercing eyes on the boy’s mother. But Duvall said he had, and Benjamin would believe him, because through that same rawness had come the midnight dream of his father’s drunken fists demanding entrance at every door and window, while inside the house, the boy dared not breathe or move on his scratchy towel, but lay listening to his mother’s dead voice at the door, “Go home, Sam.

Leave us alone.” And then his sixteen-year-old brother, Norm, the man of the house for ten years then, his voice cold and menacing: “Get the hell 1

outta here before I call the cops!” And then his seventeen-year-old sister Alice’s quick gasp down the stairs: “No! Oh please, Norm, no!” her small voice quick like the sputter and hiss of a brief wick doused as the glass shattered inward onto the cellar floor. The shards would fall, they fall, they fell, piece by piece, all night long like the faucet’s steady plink, plink, plink.

Benjamin lay awake listening to the floors creak and the strapping ping, and he began to hear from outside the faint sigh of warming sap race through the trees, from root to root, as the earth buckled with sudden shoots that tore through the ground all night long as that plink, plink grew nearer with dawn, and louder.
Plink plink plink
as the grass greened and thickened overnight with the same suddenness of the new leaves that had not been at his window the night before, but were there then, that morning of the day that Duvall would come.

So of course the boy would believe Duvall when he described the stirring in his heart that night. There seemed no mystery in any of it, for he had always known that Duvall was on his way, his coming as inevitable as the summer’s fiery sun, and as unstoppable.

I
t was early morning on Main Street. In the second-floor window of the big brown boardinghouse sat Judge Henry Clay. From here could be seen the roofs of the stores downtown on Merchants Row, and distant church spires, and farther on, the woolly green mountaintops hugging the valley.

The Judge’s right eye was closed, his left eye fixed blankly on the park across the street with its graceful elm trees and the pagoda-roofed bandstand built thirty years before, when he was mayor of Atkinson.

On the corner of the park, in his leased stand, was Joey Seldon, the blind man who sold popcorn and soda. On the opposite corner a dusty station wagon idled noisily at the red light. Inside the car were three dark men and a tall man in a white suit and straw hat. Suddenly the tall man threw open the back door and ran down the street. The car screeched around the corner after him in a burst of fumes and querulous voices. Joey Seldon cocked his head curiously.

Up in the window, the curtain fluttered, then blew across the Judge’s face. A moment later, a tiny woman with bluish-white hair backed into the room with two stemmed glasses of orange juice on a mahogany tray. This was May Mayo, who with her younger sister, Claire, ran the boardinghouse.

May quickly set down the tray on the table by the bed, then hurried to lock the door. “Oh dear,” she gasped, seeing the Judge’s head swathed in curtain gauze. She unwound the curtain, then wet her fingers and patted his mussed gray hair. She sat in the floral chintz chair next to his and drank her juice.

When it was gone she picked up the Judge’s glass and sipped daintily as she stared out at the empty park.

The Judge had been one of the town’s most respected and influential citizens. But now only a handful of his old clients ever called him and even fewer came here. In this last year the Judge had failed rapidly; his legs buckled easily, and his mind grew keener with the past than the present as SONGS IN ORDINARY TIME / 3

he fell in love over and over with every sweetheart, wife, and mistress he’d ever had, never noticing how each one spoke in May’s shy giggly voice.

One evening as she was straightening his room, the Judge had seized her hand. “Lie down,” he had whispered from the bed. “Lie down with me.”

And so she had, that night and every night until the last. In the morning she would steal down the hall in time to be roused by Claire’s demanding knock on her own door.

She reached over now and touched his cold rigid hand. From time to time voices and footsteps moved along the corridor past the locked door, and in a light gay tone, she would address the Judge. “Such a day! At last! Summer’s finally here. Really? I didn’t know that. Well, what can one—”

Her voice broke off, and her hands cupped her ears. From the Judge’s innards, there seeped another eerie hiss and with it, now, this first foul smell. Locking the door behind her, she hurried down the dim corridor to her own room, then tiptoed back with her cut-glass atomizer of Sweet Lily.

First she sprayed the rose-papered walls, the stained Persian carpet, the Judge’s soft bed, his wardrobe of limp dark suits, his oak filing cabinets in-urned with a half century’s pledges and breaches and secrets, and now, finally, she sprayed the good Judge himself, now entering his thirtieth hour of death.

T
hrough the dawn and the pale empty streets, their voices rose and fell like squabbling birds.

“Mass starts in five minutes and we’re late,” she said, hurrying on.

“Late ’cause of you,” he called ahead. “Settin’ pin curls jest to clean house and wash winders for a dollar an hour,” he scoffed.

“Windues, not winders,” she said.

If Then by Matthew de Abaitua
Not Flag or Fail by D.E. Kirk
The Secret of Willow Lane by Virginia Rose Richter
The Still Point by Amy Sackville
Redemption by Jambrea Jo Jones
Given World by Palaia, Marian
Manly Wade Wellman - John the Balladeer SSC by John the Balladeer (v1.1)
Centerfield Ballhawk by Matt Christopher, Ellen Beier
It's Complicated by Julia Kent
Nothing but the Truth by John Lescroart