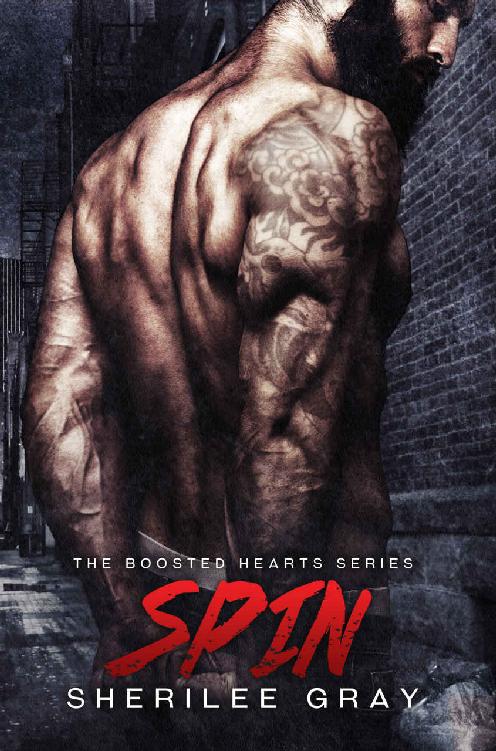 He never planned on falling for the enemy…

Indebted to a local crime boss thanks to their father’s gambling debts, mechanic Joe Colton and his brother have been forced to steal cars for three soul-killing years. But when Joe saves the man’s niece from police – the same deliciously hot-blooded woman sabotaging their efforts to clear the debt – it’s time to negotiate new terms. And discover why, that one night, she burned him with a kiss then ran…

Darcey Connors will do anything to get her baby brother away from the criminals in her family – even screw up a good man’s life. Yet in the midst of tailing Joe, she somehow falls hard for the sexy tattooed car thief. Nothing can happen between them, but she owes him big time, and if he’s going it alone, she is going to help. As long as no one ever finds out – not Joe, her family, the police – or she could lose everything.

All rights reserved. This book or any portion thereof may not be reproduced nor used in any manner whatsoever without the express written permission of the publisher except for use of brief quotations in a book review.

This ebook is licensed for your personal enjoyment only. This ebook may not be resold or given away to other people. If you are reading this book and did not purchase it, or it was not purchased for your use only, then please return it and purchase your own copy. Thank you for respecting the hard work of this author.

This book is a work of fiction. Names, characters, places and incidents are products of the author’s imagination or are used facetiously. Any resemblance to actual persons, living or dead, events or locales is entirely coincidental.

Keep in touch by subscribing to my newsletter. Visit sherileegray.com for new release alerts, giveaways, events, and other cool stuff.

D
arcey Connors tightened her long dark ponytail, tugged her baseball cap lower, then keeping to the shadows, edged along the brick wall.

She scanned the parking lot again.
All clear
. Then returned her focus to the reason she was skulking around in the dark.

A sigh escaped her lips.

Good freaking God, the man was a picture of male perfection, even while he was in the middle of committing grand theft auto. His big shoulders moved in a way that advertised the muscles under his shirt as he picked the lock, thick veins bulging along his tattooed forearms. His head was bent in concentration, that strong jaw covered in a thick beard, lips peeled back as he worked. She wanted to touch that beard. He’d grown it thicker recently, and all she could think about was how it would feel against her skin. Soft? Bristly? Would it tickle?

The lock popped and he slid straight into the driver’s seat, quickly disabling the car alarm. The engine turned over a second later. He didn’t hang around. Pulling the door shut, he drove away.

She checked her watch. Fifteen seconds.

He was good. Really good.

Joe Colton was one of the best.

He also hated her guts, and that was a damn shame, since she couldn’t even look at him without getting highly turned on or imagining all kinds of fool things—things that involved white picket fences and happily ever afters.

What made it ten times worse? She knew what it felt like to have his lips on hers. How he tasted. The dirty, hungry sounds he made when he kissed a girl.

The man kissed like she imagined he fucked. Deep, hard, and in total control of the woman on the receiving end.

She gave herself a mental slap upside the head. She had to stop thinking like that. He had a damn good reason for despising her.

She pulled her phone from her pocket and checked for messages. Nothing.

Hitting her step-father’s number, she put the phone to her ear. It rang for a while, then cut off. No goddamn way was he brushing her off again, not this time. She’d keep calling until the asshole answered.

“What the hell do you want?” he growled down the line on her fourth try.

“You know what I want.” Giving Len attitude right now was not the brightest of ideas—not when he held all the cards—but she was getting desperate. “When can I see my brother, Len?”

Len Ramirez had married her mom seven years ago, when her brother Noah had only been six months old. Now her mom was gone, Len had custody of her brother, and Darcey was tied to one of the biggest crime families in LA.

“When I fucking say you can.”

The knot in her gut got tighter. “It’s not right, keeping us apart like this.”

“You think I give a shit? And don’t go calling Al, either. He sure as fuck won’t help you.”

She squeezed her fingers around her phone, barely resisting the urge to fire it across the lot.

Al, the head of the Ramirez family and Len’s slimy, older brother, pulled the stings. And when he’d decided Darcey would be useful to him, right after her mom died, she’d had no choice but to comply.

If she wanted to see her baby brother, she did what she was told. End of story.

Now he owned her—like a pet that he didn’t really like much but kept around anyway just so he could put the boot in every now and then, for his own sadistic enjoyment.

This meant when he’d ordered her to make sure the Colton brothers didn’t meet their deadline—so he could add interest to their debt—she had to do whatever necessary to prevent them from delivering those cars on time.

But following Joe and his brother—watching them boost cars for Al—quickly became a bit of an obsession. Okay, Joe became her obsession.

So much so she’d taken to tailing him other times, times he was obviously not about to, or in the process of, boosting a car. This became a problem for Darcey when she followed him into a bar about a month ago and saw him in action, picking up some random bar bunny to take home. She’d hated it with every fiber of her being. Which was irrational. Completely ridiculous.

But the next week, when he’d gone to that same bar, she hadn’t been able to merely stand back and observe. No, instead of sticking to the shadows, she’d gone right on in. The idea of watching him go home with someone else had been unacceptable, because as messed up as it was, Joe Colton had somehow become hers. A man she’d never once spoken to, had never even been within touching distance of.

A man she’d been screwing over.

He’d been standing at the bar when she walked in, elbows resting on the surface, thick, long fingers curled around his beer. Those jeans he always wore hugged his ass and long legs, T-shirt stretched over his wide shoulders. She’d wanted to walk up to him and pull him down for a kiss. Stake her claim. Had wanted to be the one to run her hand over his cropped hair, feel his beard against her skin. After watching him for weeks, she’d felt as if she knew him, could feel a…connection between them, and he didn’t even know she existed.

She’d wanted that more than anything, for him to
know
her, to
see
her.

So she’d taken a stupid risk and approached him.

Joe had looked down at her when she’d taken the vacant space beside him—while her heart pounded like a frightened rabbit’s in her chest—with unmistakable interest in his extremely dark eyes. They’d talked, laughed. Something she hadn’t done in a long time.

The dream had become reality.

And when she’d grabbed his hand, he’d let her lead him outside, followed her behind the bar, those intense, hungry eyes never leaving her. He’d been completely on board when she pushed him against the wall and climbed that long, lean body like a tree trunk, wrapping herself around him the way she had been dying to since she’d first seen him.

He’d growled in her ear, spun her around, and taken over. Covered her mouth with his and owned it. Owned her. Joe had been everything Darcey imagined. More. Perfect.

But then she’d remembered why she shouldn’t be there—why she
couldn’t
be there—and what was at stake…right when the tips of his rough-skinned fingers had slid under her shirt. They’d ghosted over the bare skin of her belly while his erection had pressed deliciously between her thighs.

And she’d had no choice but to shove him away—leave him high and dry.

To walk away from the man of her dreams, away from his exquisite kisses… The addicting scent of pine and motor oil that filled her head, making her dizzy. His worried, “What’s wrong? Are you okay?” still ringing in her ears. As if he’d somehow hurt or upset her and would do anything to make it right.

But there was nothing he could do. It was all her fault.

Then a week after the make-out session to end all make-out sessions, Joe had turned the tables on her. Followed her after she beat him to the punch, stealing a car he’d marked, a car he needed desperately to get free of Al.

God, when he’d shoved back her baseball cap and seen her face, recognized her as the head case from the bar. The chick who’d come on strong, gotten him hard, then flipped out and ran off…

Shit, she’d never forget the expression on his face.

She forced the image away.

Yeah, he’d used her carelessness to get his brother out of the arrangement with Al. But then he’d taken that debt on himself.

So no, Joe Colton hadn’t saved her ass because he gave a shit what happened to her. And why would he? If she hadn’t gotten in the way, he’d be free of Al by now. But whatever the reason, he’d saved her from a stretch in prison, from being away from her brother for months, and she was determined to repay the favor.

Even if he didn’t know she was doing it.

Since he’d taken that debt on himself, he had no one to cover his back.

Well, Darcey had appointed herself the position.

Shoving her hands into her pockets, head down, Darcey headed back to her car. But instead of going to her crappy apartment, she made a detour across town.

She pulled up across the road from their three-story monstrosity a short time later.