Read Standing on The Edge Of Goodbye Online

Standing on The Edge Of Goodbye 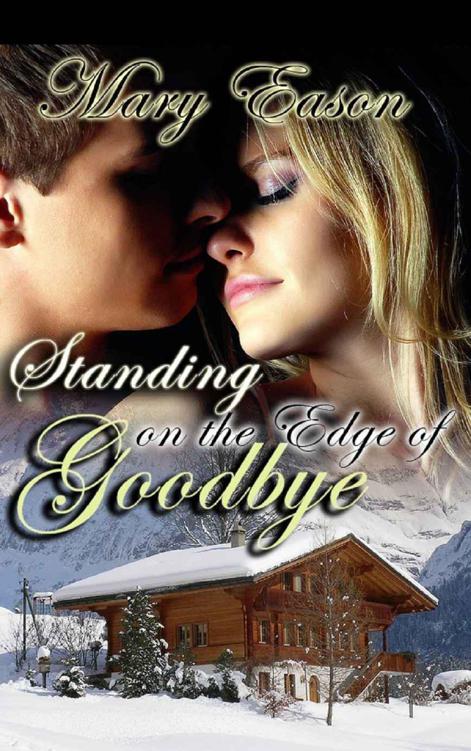 Kate forgot all about the cars when he pushed away from the door and came to her.

“Trust me. I
do want us to be friends.” His expression said what his words had not.

She swallowed hard and tried to keep her thoughts in focus. “I’m sorry. I really don’t mean to be so difficult—”

“You’re not. It’s not you. I can’t seem to say what I mean anymore.” Matt shook his head. “What are you doing later today? Because I have an idea."

Her mind went blank. She couldn't think of a single reason not to see him later except for her own reaction to being close to him.

He read her lack of answer for a yes. "Good. Then why don’t we go somewhere quiet and we’ll just talk. Just the two of us without anyone watching everything we do.”

“You can tell me anything you
'd like, ask me anything and I’ll do my best to be honest with you. Some things are hard to talk about, I won't deny. But then, I think there are some things that you find difficult to talk about as well.” He reached up to tuck one of her curls behind her ear.

His sweet, charming, completely unstaged
honesty made her see beyond the wounded person he was to the man he’d once been. Husband, father. Creative, intelligent, and one very handsome man.

She closed her eyes,
her breath labored as she struggled with her heart. When she opened her eyes again he was still there. His hand still touched her hair. He stroked it as he watched her expression. She hadn't realized how startling his blue eyes were, or how his dark brown hair held touches of gold. She hadn't noticed a lot of things about Matt until now.

Re
member Josh
. She looked away from those beautiful blue eyes that watched her too closely. R
emember how nice Josh seemed at first.

“Kate?” Her name
sounded like a whisper. “Will you do that? Will you try?”

Slowly she nodded
. She wondered how they must appear, standing mere inches apart, looking at each other like they’d just realized the worth of the other person. The tip of her tongue glided over her dry lips. He followed the movement, making her feel shaky from emotions she’d almost forgotten existed.

His finger trailed down to
her cheek to rest against the frantic beating pulse of her throat. Kate responded to his gentle pressure that moved her closer to him. He was so close that she could see the uncertainty in his gaze.

He wanted to kiss her.

And she wanted that more than anything else in the world.

“Matt, are you still in there?” Denny sounded close, just outside the barn, an unwelcome intrusion into the
ir intimacy.

Matt
reacted first. His hand drop away. His smile held as much regret as Kate felt. “Probably for the best, don’t you think?” he said softly as he bent to kiss her cheek.

STANDING ON THE EDGE OF GOODBYE

This e-book is licensed for your personal enjoyment only. This e-book may not be re-sold or given away to other people. If you would like to share this book with another person, please purchase an additional copy for each person you share it with. If you're reading this book and did not purchase it, or it was not purchased for your use only, then you should return to the author and purchase your own copy. Thank you for respecting the author's work.

To the Creator of the greatest love story ever. Thank you so much.

Okay - Mary Eason is now one of my highly recommended authors. Every storyline she creates has a way of pulling you into the story and you don’t want it to end. Great job again, Mary, and keep up the great work. I fell in love with Kate for her courage and determination to prove that she can make it no matter what the situation is at the time. I loved the romance and attraction between Kate and Matt. It was funny to see his reaction to finding out about love. ~ Melinda, NOR Review

Kate brought the beat
-up Jeep to a halt in front of the last known address of Rachel Bowers. A weather-beaten cabin her grandmother rented outside of Silver Mountain, Colorado. Kate had spent the last twelve hundred miles fighting morning sickness almost every waking moment, and the throbbing pain left over from the accident had been her constant traveling companion.

The cabin was dark even though it was barely mid-afternoon. There wasn’t any sign of the woman who’d filled Kate’s life with light for so many years.

Something about the deserted appearance of the place brought all the uneasiness back that Kate had struggled with the beginning of this trip. Had he found out about her grandmother’s existence? Had he beat Kate here and…dear God, no.

She’d almost given up hope on every single one of those miles.
The promise of seeing her grandmother again was the only thing that kept her.

She
got out of the Jeep and walked the half dozens steps up to the cabin’s door. Not a single sign of life inside and no evidence that anyone had been for quite some time. She knocked several times but there was no answer.

"Where are you, Grandma? I need you so much."

Rachel had told her once that the owner of the cabin, a man by the name of Matt Stevens, lived just a few miles up the mountainside. Grandma Rachel talked about Matt as if he were a friend. If she drove up the mountain and asked the property owner where Rachel had gone what would he know?

Suddenly, s
he was afraid of what might be. Not that she had any real choice in the matter. She had to find her grandmother. Because finding Rachel Bowers was the only thing that mattered anymore.

This was Rachel Bowers’ granddaughter?

Matt found it hard to believe th
e woman sitting before him now was in any way related to the woman he’d grown to love. Or that she had no idea her grandmother had passed away weeks earlier. How could he be the one responsible for telling her about Rachel's passing?

Unexpectedly, his heart went out to her.

Rachel was a rare breed of human. The type of woman who truly cared about those closest to her. And he'd grown close to Rachel. Even though his only connection to her was the tiny cabin sitting at the edge of his property she’d rented a few years earlier.

“Miss Alexander—Kate, when was the last time you spoke to your grandmother?”

She
grew cautious. She knew. He could see it. See the tears gathering even as she struggled to hold them back.

Kate clutched the arms of the chair, bracing for the worst. “Please, just tell me.”

Please don’t let her cry.
Matt steeled himself to say the words. “Kate, I’m sorry, there’s no easy way of telling you this, but your grandmother passed away three weeks ago.” He paused for a moment, needing to collect himself. Every time he thought about the woman who'd been like his own grandmother, it hurt to think he'd never seeing her again.

“She’d been ill for a while. Her heart had gotten weak. Then she developed pneumonia and…” Matt swallowed the lump in his throat.
He’d begged, pleaded with Rachel to let him take her to the hospital, at least contact Kate. Rachel had refused them both.

Kate
clasped her hand over her mouth. A muffled sob escaped. She appeared stunned, heartbroken. Devastated by the news. She hadn’t known how ill her grandmother was and now it was too late.

Matt watched
her struggle to keep from falling apart. He understood what she was going through. He remembered too well the gut wrenching pain he’d experienced at losing the woman who’d become his rock.

He tried to recall
what Rachel had told him about Kate. She certainly talked about her granddaughter enough.

Kate would be at least twenty-four
by now, yet the combination of her short blond curls and no makeup made her appear much younger. Maybe it was the freckles or those clear green eyes that held innocence in them that Matt had long ago stopped associating with women.

She was dressed in faded jeans and a white short-sleeved
T-shirt that was out of place in this cold gray Colorado afternoon.

“You’re shivering. Come sit by the fire. The weather here takes some getting used to. Do you have a jacket?”

Kate followed behind him like a robot while he stoked the dying fire back to life.

“Thank you
.” She cleared her throat, her voice stumbled over the words. “I had no idea she was so ill. I hadn’t spoken to her in a while. I tried…” She stopped, glanced at him as if trying to gauge his reaction to this obvious slip. “There were reasons. My grandmother understood why I couldn’t keep in touch.”

Matt realized Kate was hiding something dark, yet he didn’t dare open that door.
Couldn't go down that road again for anyone. Not even Rachel's granddaughter.

“My grandmother
spoke very highly of you, though. She considered you a friend,” she added. He wasn't really surprised by her revelation. Rachel considered everyone a friend.

He shook his head.
“No, she didn’t suffer. She simply drifted off to sleep one day. And, yes, she
was
…my friend. She came to visit, forced me to visit her as well,” he added lost in his memories. “Rachel used to bring over cookies and flowers and just talk about how she loved this mountain and her little cabin. How she missed you, wanted you to be happy.” Matt didn't tell her that because of his chats with Rachel he felt as if he knew Kate as well. Yet the reality before him now was nothing like the vibrant picture Rachel had painted.

Kate got
to her feet with difficulty and stood perfectly still for a moment, her eyes closed as if she’d moved too quickly and was close to losing her bearings. One hand clutched her stomach while the other covered her mouth.

An uneasy feeling propelled him from his chair. “Are you all right?” he asked, quietly surveying her pale face. “You’re as white as a sheet. Do you need me to call a doctor for you?” Matt stopped when she turned and walked to the door. He couldn’t let her leave like this
, surely. He owed it to Rachel to take care of her granddaughter.

Looking for Love by Kathy Bosman
Return to Poughkeepsie by Debra Anastasia
Scent of Murder by James O. Born
Everything I Need to Know Before I'm Five by Valorie Fisher
Gentle Curves (Dangerous Curves Book 4) by James, Marysol
Dark Secret by Anderson, Marina
The Lost Painting by Jonathan Harr
The Hanging Hill by Chris Grabenstein
Sally's Destiny - A short story of Love and Romance in the Scottish Highlands by Temple, A. J.
Pretend for Me by Sam Crescent