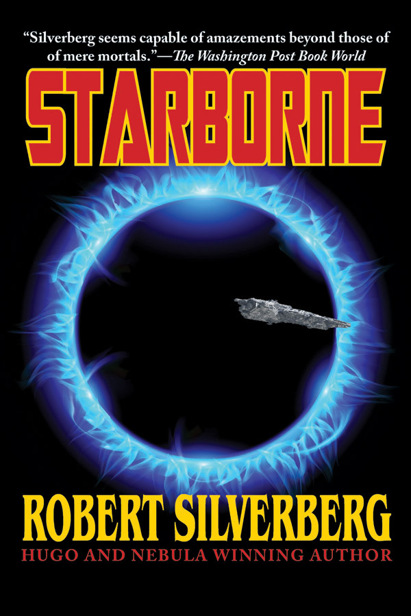 An Imprint of Arc Manor

Starborne
Copyright ©
1996 by Agberg, Ltd.
All rights reserved. This book may not be copied or reproduced, in whole or in part, by any means, electronic, mechanical or otherwise without written permission from the publi
sher except by a reviewer who may quote brief passages in a review.

This is a work of fiction. Any resemblance to any actual persons, events or localities is purely coinc
i
dental and beyond the intent of the author and publisher.

This book
is presented as is, without any warranties (implied or otherwise) as to the accuracy of the production, text or translation.

an imprint of Arc Manor

For Dave and Nancy DeRoche

Friends, take heart, banish all fear.  One day
—
who knows?
—
we will look back even on these things and laugh.

—
The Aeneid, Book One

Sixteen light-years from Earth today, in the fifth month of the voyage, and the silken force of nospace acceleration continues to drive the sta
r
ship
’
s velocity ever higher. Three games of
Go
are in progress in the
Wotan
’
s lounge. The year-captain stands at the entrance to the brightly lit room, casually watching the players: Roy and Sylvia, Leon and Chang, Heinz and Elliot.

Go
has been a craze aboard s
hip for weeks. The players
—
some eighteen or twenty members of the expedition have caught the addiction by this time, more than a third of the entire complement
—
sit hour after hour, contemplating strategies, devising variations, grasping the smooth black o
r
white stones between forefinger and second finger, putting the stones down against the wooden board with the proper smart sharp clacking sound. The year-captain himself does not play, though the game once interested him to the point of obsession, long ag
o
, in what was almost another life; his shipboard responsibilities require so intense an exercise of his energies that he can find little amusement in simulated territorial conquest. But he comes here sometimes to watch, remaining five or ten minutes, then
going on about his duties.

The best of the players is Roy, the mathematician, a large, heavy man with a soft sleepy face. He sits with his eyes closed, awaiting in tra
n
quility his turn to play. “
I am purging myself of the need to win,”
he told the year-cap
tain yesterday when asked what occupies his mind while he waits to put down his next piece. Purged or not, Roy continues to win more than half of his games, even though he gives most of his opponents a handicap of four or five stones.

He gives Sylvia a han
dicap of only two. She is a delicate woman, f
i
ne-boned and shy. Genetic surgery is her specialty. Sylvia plays the game well, although slowly. She makes her move. At the sound of it Roy opens his eyes. He studies the board the merest fraction of a s
e
c
ond,
points, and says, “
Atari
,”
the conventional way of calling to his opponent
’
s attention the fact that her move will enable him to capture several of her stones. Sylvia laughs lightly and retracts her move. After a moment she moves again. Roy nods and picks
up a white stone, which he holds for nearly a minute, hefting it between the two playing fingers as though testing its weight, before he places it. Which is not at all typ
i
cal of him: ordinarily he makes his moves with intimidating speed. Pe
r
haps he is tir
ed this morning. Or perhaps he is simply being kind.

The year-captain would like to speak to Sylvia about the anaerobic gene-cluster experiment, but evidently the game is barely under way; he supposes that she and Roy will be occupied with it for another h
our or more. His questions can wait. No one hurries aboard the
Wotan
. They have plenty of time for everything: a lifetime, maybe, if no habitable planet can be found. All the universe is theirs to search, yes. But it may well be the case that nothing usefu
l will be found, and this ship
’
s walls will mark the full boundary of their universe, forever and a day. No one knows, yet. They are the first to venture out this far. At this point there are only questions, no answers. The only thing that is reasonably c
e
rtain is that they are bound on a voyage from which there is no expectation of returning.

All is quiet for a time in the lounge. Then Heinz, at the far side of the room, loudly places a stone. Elliot acknowledges it with a little chuckle. Chang, at the boa
rd next to them, glances over to look; Sylvia and Roy pay no attention. The year-captain scans the board of Roy and Sylvia
’
s game, trying to anticipate Sylvia
’
s next move. His eyesight is sharp: even at this distance he can clearly make out the patterns o
n
the board. Indeed, everything about the year-captain is sharp. He is a man of crisp boundaries, of taut edges carefully drawn together.

Soft footsteps sound behind him.

The year-captain turns. Noelle, the mission communicator, is a
p
proaching the lounge. S
he is a slim sightless woman with long gleaming blue-black hair and elegantly chiseled features. Her tapering face is a perfect counterpart of the year-captain
’
s own lean, austere one, though she is dusky, and he is fair-haired and so pale of skin that he
seems to have been bleached. She customarily walks the corridors unaided. No sensors for Noelle, not even a cane. Occasionally she will stumble, but usually her balance is excellent and her sense of the location of obstacles is eerily accurate. It is a ki
n
d of arrogance for the blind to shun assi
s
tance, perhaps. But also it is a kind of desperate poetry.

He watches in silence as she comes up to him. “
Good morning, year-captain,”
she says.

Noelle is infallible in making such identifications. She claims to be
able to distinguish each of the members of the expedition by the tiny characteristic sounds they make: their patterns of breathing, the timbre of their coughs, the rustling of their clothing. Among the others there is a certain skepticism about this. Man
y
aboard the starship believe that Noelle is simply reading their minds. She does not deny that she po
s
sesses the power of telepathy; but she insists that the only mind to which she has direct access is that of her sister Yvonne, her identical twin, far awa
y on Earth.

He turns to her. His eyes meet hers: an automatic act, a habit. Her eyes, dark and clear and almost always open, stare disconcertingly through his forehead. Plainly they are the eyes of a blind person but they seem weirdly penetrating all the s
ame. The year-captain says, “
I
’
ll have a report for you to transmit in about two hours.”

“
I
’
m ready whenever you need me.”
Noelle smiles faintly. She li
s
tens a moment, head turned slightly to the left, to the clacking of the
Go
stones. “
Three games being p
layed?”
she asks. Her voice is soft but m
u
sical and clear, and perfectly focused, every syllable always audible.

What extraordinary hearing she must have, if she can perceive the sounds of stones being placed so acutely that she knows the number of
game-boards that are in use.

“
It seems strange that the game hasn
’
t begun to lose its hold on them by now.”

“
Go
can have an extremely powerful grip,”
the year-captain says.

“
It must. How good it is to be able to surrender yourself so co
m
pletely to a game.”

“
Time?”
Noelle laughs. The silvery sound is like a cascade of little chimes. “
What is there to do with time, except to consume it?”
Then after a moment she says, “
Is it a difficult game?
”

“
The rules are actually quite simple. The application of the rules is another matter entirely. It
’
s a deeper and more subtle game than chess, I think.”

Her glossy blank gaze wanders across his face and suddenly her eyes lock into his. How is she able to
do that? “
Do you think it would take very long for me to learn how to play?”
she asks.

“
Why not? I also need amusement, year-captain.”

“
The board is a grid with hundreds of intersections. Moves may be made at any of them. The patterns that are forme
d as the players place their stones are complex and constantly changing. Someone who
—
isn
’
t
—
able
—
to see
—”

“
My memory is excellent,”
Noelle says. “
I can visualize the board and make the necessary corrections as play proceeds. You would only have to tell me w
here you are putting down your stones. And guide my hand, I suppose, when I make my moves.”

“
Will you teach me anyway?”

I have not yet ceased to wonder at the fact that we are here, aboard this ship, carrying out this
voyage, acting out this destiny that the un
i
verse has chosen for us. How many times have I made this entry in my journal, after all? Five? Ten? I keep returning to this one slender point, worrying it, prodding at it, marveling that this is happening and t
hat it is happening to us. Not to me, particularly
—
what good would all my training on the island have been, if I were still the center of my own world, like a child?
—
but to us, this larger entity, this group of individ
u
al and disparate and oddly assorted p
eople who have come together willingly, even joyously, in this curious endeavor.

The Tudor Rose by Margaret Campbell Barnes
For All Eternity by Heather Cullman
Guardians of the Galactic Sentinel 1: The Deimos Artifact by Phillip Nolte
A Prayer for the Dying by Stewart O'Nan
miss fortune mystery (ff) - my sinful valentine by snow, anna
One More Night with You by Lisa Marie Perry
TheOneandOnly by Tori Carson
Risen: The Demontouched Saga (Book 6) by Douglas Wayne
Change (The Shape Shifter Series) by Loiske, Jennifer
The Royal Hunter by Donna Kauffman