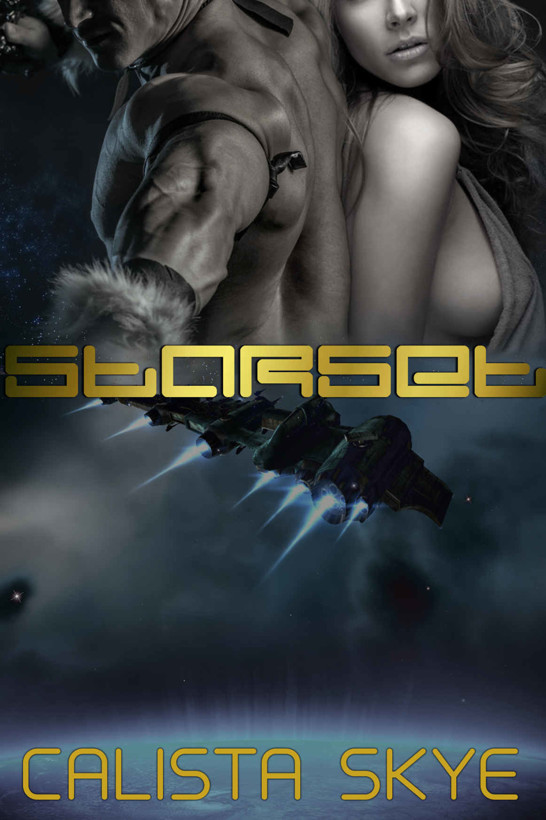 Shala cannot wait to get off of Telera One the second it docks and recolonizes the people of the original Telera. Gruff, ornery, and generally suspicious of outsiders, they haven't made her time easy as an officer of the allied forces. So, when their prince is forced to defend himself and nearly murder an intruder, and the captain delays reports of it, she's understandably confused. Especially when despite the no-fraternization rule of the allied forces, she's invited to one of the Telerans' most sacred spirit-revering ceremonies as his esteemed “plus one.”

Can she really keep denying how hot the room gets when he enters it, or the not-uncomfortably invasive way he looks at her? And when he goes all in for the claim, will she accept an uncertain future as a princess, in the middle of a burgeoning blood feud with the father of the intruder he bloodied?

It seems like a sure dance with the devil; so why is she making her way toward the dance floor...

note: This alien warrior romance is sprinkled with a bit of 'All Hallows' in the form of the Teleran event: Eiowa. Happy Hallow's readers!

The last bastion of a planetless people who rather dislike the technology of their floating city. If we're being honest. Pretty ungrateful, if you asked Shala. She was entirely over the cultural cluster-fuck that had come to be Telera one, and she couldn't wait until they docked planetside on their shiny, newish orb for rehabitation. Telerans were a highly suspicious, dogmatic, often vitriolic people, and Shala promised herself she was taking a long vacay after she finished up with this post.

Maybe she'd take a nice trip to Tenta. Given the new outpost installed with the permission of King Sesh, there was still a slot available for second officer. Hell, she'd sign on as a tour guide if it meant she didn't have to see another Teleran frown for at least a decade.

Shala's brow quirked, the blue gleam of the data screens illuminating her face with each reporting blip popping up in her scans. Three more bloody fights below deck. That's what you got with a group of warriors, zealots, and jum addicts who all mostly disagreed with one another's logic.

Drawing a calming breath, she drew a sip of Kafka from the Mooning shell Jake brought over from Sector 9. Technically, it was against the rules to have it aboard the ship, but she doubted any alien bacteria had come over with it that would truly be a risk.

She was flouting those rules, quite willfully, thank you.

The Captain paid far too much attention to detail, and she'd long decided to ignore him when he got started on his rants about cleanliness and ship security.

“Officer Kane, we have an incident on Level 8. Bring your weapon,” Captain Von's voice cut in through the intercom.

“Daily living on Telera One,” she chimed to herself with a hefty dose of sarcasm infusing her tone.

Rising up from the data panels, she retrieved her thruster and shoved it into her thigh harness. Whatever was going on was unlikely to warrant anything but a few rounds of wave blasts to calm whichever brute had consumed too much Brew Wine and decided to throw his weight around.

It was all so predictable, she might just cry.

She was seriously considering starting a betting pool.

Might as well raise some extra credits for that trip to Tenta.

She was getting that vacay if it killed her.

Well... she hadn't expected this.

“They're sending out AIs. Pretty obvious they're scouting us.”

Jake folded his arms over his chest nervously, looking down at the pool of nano blood leaking into the cracks of the gleaming, metal decks. The thing had been terminated before Shala arrived, but it wasn't certain that there weren't more of these unnaturals lurking and laying in wait for a chance to attack.

“Yeah, they probably are,” Shala sighed. “Have you called the cleaners?”

“They're on their way up with a guard.”

Smart of him to think of that. Once they left the cleaners to do their thing, someone would need to linger in close proximity to keep an eye on the floor. If the acquisitioners who'd sent this one were close, it was likely they were planning to make a run for the ship, and well, that just wasn't good for anyone. There'd been a time when acquisitioners handled things head on, but they were smart... adaptive. Learning what little bio-engineering they could, they'd begun to make their own soldiers. The humans they refashioned were saved for the bidding wars their low-market customers clamored over.

Shala's lip curled at the thought.

The whole business of it was disgusting. The galaxy needed to be rid of their ilk already.

Lowering to a crouch, she inspected the thing, running the bio-scanner over its dismantled body with a serious set to her jaw. Clean. Sadly pretty, too. Relieved to find the thing hadn't been sent over with bio-contaminants, she rifled its pockets, retrieving little but the nutripackets they relied on to run.

“Yeah. Nothing to see here. I'll write up the report. Who took it down?”

“One of the Telerans. He's coming out of the medical bay. Probably in processing now. Took a good slash to the stomach. That thing's got razor sharp nails.”

Taking a last glance around the thing, she couldn't help but be impressed that a Teleran took it down singlehandedly. And by handed, that also meant weaponless in this instance. There were no taser burns. Nothing that even indicated a blade had disturbed the AI's body.

Brow rising, Shala's focus stopped just at the AI's cheek. It was already discolored. Like it was made of organic material.

“Can you... have some tissue sent over to Tana?”

A frown touched her lips.

“Let's make sure this one was actually an AI. If they're sending their human-remakes in now, we've got a whole kettle of regulations to wrangle with.”

Jake shook his head with disgust.

He was still extremely sensitive to death, a new recruit, as it were. This was his first mission, in fact. Shala remembered when she was that easily shaken. Life in the stars had seemed ridiculously dark then, with perils lurking at every corner. So many species to keep track of, all of them with their own quirks, features, and defenses (or offense in too many cases before the allied territories were implemented).

It was quite a lot to process, and not something that was typically done quickly.

“Take a load off, Jake. The best way to get this sort of thing out of your head is in the promenade. First drink's on me.”

He was a moment turning his head, but then his big, brown eyes found hers, and she saw him relax just enough that she felt alright leaving him alone until she could get the interview with the Teleran over with. He'd be fine. Just a little green around the edges. Something that would easily be fixed with time.

She gave him an encouraging grin.

Shala's smile deepened, and she stepped back then, not wanting or needing to look at the AI's body again. A shiver passed through her when she considered that it might not be an AI at all, but a remade human controlled and fully reprogrammed by the worst fiends in the galaxy.

Jake wasn't the only one who needed a drink. She was going to the promenade tonight as much for herself as she was for him.

The data sheet cast a blue streak of light across Shala's cheeks as she lifted it, and she pursed her lips when she set it down in front of her. Lowering to a seat across from him, she gave the Teleran warrior a good long look. He was unusually pretty for one of the gruffer types, but Shala wasn't one to distract herself.

On with the business at hand.

“Alamna,” she offered in greeting, noting the already uncooperative body language in his pristine build.

“This is just a formality. I won't keep you from your... whatever you had planned on getting into tonight. Just need a few details about the dead AI on Level 8.”

Another shiver passed through her saying the word AI. Until she heard back from the medical bay, it was a placeholder for whatever the girl thing might
actually
be.

Cricking a brow, the Teleran looked her over, his eyes like night intense, but unreadable. For a displaced people, they weren't exactly grateful to be aboard. But then, the allied forces weren't truly offering them a choice. The directive to preserve life often meant ruffling cultural feathers when there was a perceived need.

Shala could understand both sides of it. It was surely uncomfortable for everyone involved. The Telerans made it known just how displeased they were with being force fed ship regulations; even something as simple as a debriefing like this was a kind of affront to their closed-off culture.

He'd cooperate, but she'd have to ask the right questions to get what she needed out of him. He certainly wouldn't be forthcoming about the slightest thing.

“So... The AI. When did you realize there was an intruder on the ship?”

The warrior looked her over, clenching the strong set of his jaw before drawing a sigh. It was obvious he was having the same difficulty sitting across the table from a half-human, half-Kalion officer who represented the containment of his people.

It
meant
things, of course.

“When he took a false step on the deck panels behind me.”

Not bad. A one sentence answer was certainly better than a word or sentence fragment. She'd half-expected him to answer her with something like “an hour ago.” It was nice to not have to pull teeth.

Brightening some, Shala moved on, forcing her mind to distance itself from the distracting scent of wood and sea. Even away from their planet, Telerans smelled of their home, like they themselves were made of trees and water.

“Is that when your injury occurred?”

The warrior grit his teeth.

“At which time, you incapacitated the AI?”

“Did you not see the evidence of that?”

Grinning, Shala pushed down the reactive part of her that would have matched his sarcasm.

“Yes, but we need to verify what we saw when a first-person account is available.”