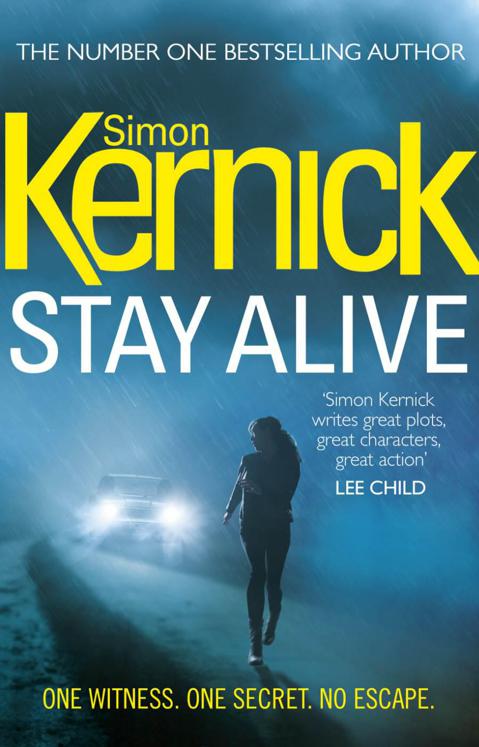 You’re on a trip with your family, miles from anywhere. A shot rings out – and your whole life changes in an instant.

A woman is racing towards you, chased by three gunmen. Although you don’t know it, she harbours a deadly secret. She’s in terrible danger. And now you are too.

You know that the men hunting you have killed before.

Simon Kernick
is one of Britain’s most exciting thriller writers. He arrived on the crime writing scene with his highly acclaimed debut novel
The Business of Dying
, the story of a corrupt cop moonlighting as a hitman. Simon’s big breakthrough came with his novel
Relentless
which was the biggest selling thriller of 2007. His most recent crime thrillers include
The Last Ten Seconds
,
The Payback
,
Siege
and
Ultimatum
.

Simon talks both on and off the record to members of the Met’s Special Branch and the Anti-Terrorist Branch and the Serious and Organised Crime Agency, so he gets to hear first hand what actually happens in the dark and murky underbelly of UK crime.

The Business of Dying

A Good Day to Die

For my daughters, Amy and Rachel

AMANDA ROWAN HAD
just stepped inside her front door, a shopping bag containing a pair of new shoes in one hand, her keys in the other, when she heard a sound that stopped her dead.

It was a faint, sudden gasp. Like air escaping from a tyre. Coming from somewhere upstairs.

Amanda listened intently, but all that came back at her was thick silence, interspersed with the ticking of the grandfather clock further down the hallway and, for a few seconds, she wondered if she’d imagined it.

The lights were on all over the house, and her husband’s Porsche was in the driveway, which meant he was home. He shouldn’t have been. He was supposed to be away on business in Manchester until the following afternoon. She’d seen him leave in the car early that morning, and had even spoken to him three hours earlier, just as he was about to go off to a client dinner. Except he hadn’t been going to a client dinner, because his car was here, two hundred miles away from Manchester.

Something had brought him back home early. And she knew exactly what it was.

George had been having an affair for months now. She’d found out about it purely by accident a few weeks earlier. One evening he’d forgotten to sign out of his Hotmail account on one of the two iPads they had in the house, and when she’d picked it up and tried to log into her own account, a long list of messages to George from an Annie Mac – a woman she’d never heard of – with subject titles like ‘I need you, darling’ and ‘Missing you desperately’, had appeared. Feeling numb, but not altogether surprised, Amanda had opened the first one and read it through. She didn’t need to read through any of the others. She got the gist.

Even so, it still rankled that he was so blasé about the whole thing that he’d bring his lover back here to the marital home. Maybe it had been her who’d made that strange noise, although it hadn’t sounded like anything she’d associate with lovemaking.

Amanda put down the shopping bag and closed the door quietly. Like her husband, she wasn’t meant to be coming back tonight. She’d arranged to stay overnight in London at her dad’s house, but her dad was a cantankerous old sod, and they’d had one of their inevitable arguments. Rather than let his angry barbs wash over her, as she usually did on the few occasions she visited him, Amanda had lost her temper, stormed out the door with a curse for a goodbye, and driven straight home.

It was weird though. No music was playing in the house, and the TV wasn’t on, which wasn’t like George. He needed background noise.

Upstairs, one of the floorboards creaked. Someone was creeping around up there and, even though she knew who it would be, Amanda tensed. That’s what happened when you lived in a three-hundred-year-old cottage in the middle of the woods, she thought. She loved this place. It had character, beauty, and desperately needed solitude, but it was also only a few miles from the M3, and barely an hour from the bright lights of London. And yet at night, when the only sounds were the hooting of owls, and the occasional drone of aircraft passing high overhead, it made her feel vulnerable. Especially without George’s background noise.

A floorboard creaked again. It was coming from one of the bedrooms. Amanda frowned. George was a big man who’d usually downed a bottle of red wine by this time of night, regardless of who he was with, and he tended to make a lot of noise moving about, even when he was trying to be quiet. He also had an irritating habit of loudly clearing his throat, especially when he’d had a drink.

But the creaking had stopped, and there was nothing coming from up there now.

The obvious conclusion was that he was trying to hide, because he knew he’d done something wrong. Like bringing his lover home while his wife was away.

Amanda stood in the hallway. Her heart was beating loudly and her mouth was dry. She wasn’t the sort of person who enjoyed furious confrontation. She preferred just to walk away when things went wrong. And she’d already lost her temper once tonight.

Pull yourself together, she told herself. This is
your
home.

Bracing herself, she called his name, her voice loud, but with just a hint of nervousness in it as it cracked through the dead silence.

‘Look, I know you’re there. Your car’s outside.’

Slipping off her heels and taking a deep breath, she slowly made her way up the staircase and onto the long narrow landing that ran the width of the house. The lights were on but it was empty. To her left, the door to the master bedroom – the room she shared with George, at least when he wasn’t snoring like a chainsaw – was wide open. It was dark inside but she could see that the bed was unmade, the sheets piled up and ruffled. There was no doubt there’d been action in there today.

Turning away, she saw that the light was on in the guest bedroom at the opposite end of the landing, and the door was ajar.

She took a step towards it, then another, before pausing and taking a deep breath that seemed loud in the silence. The house was suddenly utterly still. She kept walking towards the guest bedroom, her bare feet silent on the varnished floor, and stopped a foot away.

She couldn’t hear anything behind the door. Not even a breath. It was as if the whole world had stopped moving.

Reaching out a hand that was ever so slightly shaking, she gave the door a push, and as it creaked open a few inches, Amanda caught the pungent stink of blood and faeces, and saw the naked, bloodied foot sticking out on the carpet. The foot belonged to a woman. It was small and dainty, and the toenails were painted a bright, confident red, several shades lighter than the thick pool of blood forming on the carpet several feet further in.

Was that the noise she’d heard when she’d first come into the house? The final gasp of a dying woman?

If so, it could only mean one thing. The killer was still in the house.

Behind her, the floorboard creaked once again, and it felt as if icy fingers crawled up her spine.

Amanda swung round fast just as a man in dark clothing and a balaclava, taller and leaner than George, appeared in the doorway to their bedroom, barely twenty feet away.

For a long second, she didn’t move as her eyes focused on the hunting knife in his hand. Blood – fresh blood – ran down the groove and pooled at the tip, forming beads that dripped onto the floor.

She swallowed. There was no way she would reach the staircase before he did.

And then the intruder was coming towards her with long, confident strides, his boots banging hard and purposefully on the floor.

Acting entirely on instinct, Amanda scrambled over the landing stair rail, jumping the six feet down onto the staircase and falling down painfully on her behind, before scrambling to her feet again and bolting down the remainder of the steps, jumping the last five in one go as she heard him coming down behind her, moving just as fast as she was.

As her feet hit the floor at the bottom, she slipped on the floor and went down hard on her side, losing a precious second as the intruder charged down the staircase right behind her.

In one rapid movement, she jumped to her feet just as he threw himself down the last of the steps and landed barely a yard away from her.

Amanda had a choice of two exits – out of the back of the house or through the front – and only a split second to make her decision. Knowing that she hadn’t double-locked the front door behind her, as she usually did, she ran through the front hallway, trying desperately to keep her balance in her bare feet. She could hear his heavy breathing – he was that close – and it took all her willpower to slow up just enough to grab both handles of the door and yank it open, before throwing herself through the gap and into the cool outside air.

But she’d barely gone two yards when she felt a hand grab her jacket from behind, and she was yanked backwards into a tight embrace as his arm encircled her neck, the grip immediately tightening. Screaming as loudly as she could, Amanda thrashed wildly with a strength born of pure adrenalin, her arms flailing as she tried to fight her way out of his grip. She felt a surge of pure, hot pain as one arm collided with his knife, the blade slicing through the light jacket and shirt she was wearing, ripping through the flesh. But somehow she managed to drive an elbow into the side of his head with enough force for him to loosen his grip. Amanda went to the gym five times a week, and the previous year she’d done a boxing course. She was fit and she was strong and, right then, it counted in her favour. Wriggling free from his grip and dodging the knife, she threw a wild punch at him – something he clearly wasn’t expecting, the blow catching him full in the face.

He stumbled back, cursing and putting a hand to his nose, but still keeping the knife held out in front of him. Already he was beginning to right himself, and Amanda knew that she only had a few moments’ respite. Reaching down in one movement, she grabbed a handful of gravel from the driveway and flung it at him, before taking off in a run towards the thick wall of beech trees that bordered their property on three sides, ignoring the painful grind of the gravel on the soles of her feet.