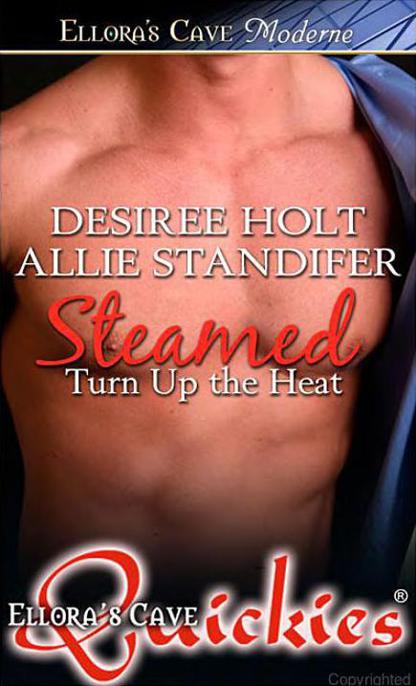 Book 4 in the Turn Up the Heat series.

Kira Jacobs is sick of always being the bridesmaid, never the bride. Sick of dating hot studs who have no more depth than the water in her sink. She’s determined to find a lasting meaningful relationship with a mature, suit-wearing man. But her goofy, stay-at-home neighbor sends her all kinds of hot signals.

Grant Havers left the high finance rat race after having a heart attack at thirty-eight.

He’s done with living up to everyone’s expectations but his own. It’s time to go after what he wants. What he wants most is sexy Kira. He’s convinced her to try him out in bed, but she’s determined to leave it as sex only.

To all of our wonderful readers. You’re the ones we “Turn Up the Heat” for, because you’re the reason we write our stories. Thank you for your loyalty.

As far as Grant Havers was concerned the party had gone on long enough. He had to limit his drinking these days, most of the people in attendance were boring, and what he really wanted to do was go home and hide from the world. Having open-heart surgery at thirty-eight gave you a totally different perspective on life. He couldn’t remember the last time he’d been to a party. Or stayed out until dawn. Or even gotten laid.

That was a hell of a note. Dr. Harper had told him it was okay to resume sexual activities, but Grant hadn’t found a woman yet to tempt him out of his self-imposed shell of fear. What if he had another heart attack in the middle of fucking some woman?

What if he collapsed on her? What if he died in the middle of an orgasm?

He could see the headline now.
High-Powered CEO Dead at 38 with an Erection.
Never mind that the CEO was retired, had sold out his share of the company at a huge profit— more doctor’s orders—and had been flying solo with his dick because he was scared shitless. Anyone who’d known Grant before the surgery would be laughing their collective asses off.

Shit. He was scaring himself enough to cork off right here on the spot.

Not that he didn’t want to celebrate the engagements of two of his cousins. The Brody brothers—Skyler and Reed—had somehow managed to find the perfect women for them. And if what he saw transpiring in an opposite corner of the room was any indication, River, the third brother, wasn’t going to be far behind. Grant was very glad for all of them but enough was enough. He lounged in a corner of the big room, trying to make himself invisible and figure out how much longer her had to stay before he could make a polite exit. He had just slugged down the last of his club soda when he 6

spotted a woman who had entered the room. For a sharp moment his breath caught and he wondered if he was having another heart attack.

She couldn’t have been more than five foot five but she wore heels that gave her another four inches of height. Thick, curly black hair tumbled wildly down past her shoulders and rioted around a heart-shaped face. Unlike the stick-figured women who’d been hitting on him all evening, this one had plenty of curves and in all the right places. His palms suddenly itched and his dick stood up at rigid attention.

Just what he needed. A hard-on in the middle of an engagement party.

Grant pressed the cold glass against his cock, hoping the ice would work through the fabric of his pants to subdue some of the heat. When he felt it was safe to move, he threaded his way through the crowd to where he’d seen the luscious bit of womanhood heading. There she was, hugging the Jacobs cousins—Kendra and Kasey, the prospective brides—and exchanging kisses with them.

Was she a friend? A relative?

He had to get an introduction.

Muttering, “Excuse me” five or six times as he maneuvered around people, he finally made his way to where Skyler and Reed were leaning against the bar. Both looked disgustingly self-satisfied.

“Hey!” Skyler held out his hand. “I didn’t see you earlier and I wasn’t sure you’d actually made it. Glad you showed up.”

That was because Grant had kept to himself as much as possible. The brothers were in the midst of a bunch of fellow cops when he arrived and his new antisocial tendencies had kicked in. He’d quietly left his presents on the gift table, gotten his glass of club soda and consigned himself to a corner. Every ten minutes he looked at his watch to see how soon it would be polite to leave.

But now he had a mission.

“Couldn’t miss seeing you guys finally bite the big one,” he joked, shaking hands first with Skyler and then with Reed. He nodded at the three women still chatting together. “I see you both picked winners.”

“More like they picked us,” Reed said. “Thank God for that.”

Reed punched him lightly on the arm. “It happens to the best of us.” Then his face sobered. “So, how’s the ticker working?”

“Fine.” Grant wished people wouldn’t ask him about it. It made him feel as if he had a sign that read “Invalid” on his forehead. “I’m doing great. No complaints.” He plastered a smile on his face. “Enjoying my new lease on life.”

“Not bored sitting around the condo?” Skyler wanted to know. “I can’t imagine you hanging out in front of the plasma television all day.”

“As a matter of fact, I sold the place and bought a house.”

Grant shrugged. “I needed a change. Everything in the housing market was upside down so I figured it was a good time to buy some real estate. Anyway, change of lifestyle, change of living space. Whole new start, right? And who knows? Maybe I’ll find a new business to go into. Something less stressful.”

Grant forced a smile. They’d all grown up together. The Brody boys had gone into law enforcement and Grant, fascinated with all things technical, had invented a piece of software that it seemed no police department could live without. From there things had exploded, including his body when he had his near fatal heart attack. Lying in the hospital he’d have given anything to change places with any one of his friends.

Time to change the subject.

“So who’s the looker talking to your future wives?” He waved his glass in the direction of the three women, hoping he sounded casual.

Did he? His cock was telling him yes. Definitely.

“No.” He tried to appear nonchalant. “Just asking out of curiosity. She’s…a good-looking woman.”

“Come on,” Skyler insisted. “I think you two might hit it off.”

Up close Kira Jacobs was even sexier than at first glance. Hazel eyes glimmered beneath thick dark lashes and one tiny dimple winked at the left corner of her mouth.

Her red dress was made of some kind of soft fabric. It fell easily over her breasts and caressed her generous hips the way Grant wanted to. He had to touch this woman, even if it was just for a moment.

She smiled when Skyler introduced them and held out her hand.

Grant set his glass down on a nearby tray and took the small hand in his large one.

“How about a dance?”

Now where had that come from? He saw Skyler and Reed exchanging amused glances with their fiancées but he just ignored them, leading Kira out onto the dance floor. The DJ had switched to something slow and smooth and he pulled her against his body. Her full breasts pressed against his chest and his groin tightened. He put both arms around her and slid one hand down to the indentation at the base of her spine, 9

splaying his fingers against the soft flesh. He wanted to drift lower, to the curve of her ass, but he figured on a four-second acquaintanceship he was already pushing his luck.

He rested his head against the top of her head, inhaling her scent. Something spicy but light. God, she smelled fantastic.

“So, um, are you a cop like the brothers?” she asked, tilting her head back to look at him.

“No, no I’m not.” Grant maneuvered one hand up to loosen his tie. The room had suddenly gotten very hot.

“Just another friend. The Brodys and I go way back.” He didn’t want to talk about his friends or what he did for a living. He was imagining what she’d look like without her clothes, and realized his hands were wandering up and down her back. He had to stop before he disgraced both of them on the dance floor. A sliding glance told him Skyler and Reed were watching them with huge, shit-eating grins on their faces.

Her voice had such a soft, musical quality to it he thought he could listen to it all night long. He hated breaking the intimate contact with her but he was afraid he’d embarrass himself in a minute if he didn’t. He got another club soda for himself and white wine for Kira.

“How about if we go out in the hallway and drink these?” he asked. “It’s really hot and crowded in here.”

She looked at him a little strangely, but then she smiled and he knew he was sunk.

Smitten. Bitten. Whatever. In a few brief minutes. He guided her out into the wide hotel hallway, with furniture placed strategically here and there. He found a small table with two chairs against the wall and led her over there. When she smiled at him over the rim of her glass and that little dimple winked, his cock stood up and saluted.

“Has anyone ever told you what a beautiful woman you are?” he asked, and then wanted to smack himself for such a stale line.

Kira stared at the man across from her, wondering what it was about him that had turned her on the moment he’d taken her hand. He was definitely good-looking but it was more than that. There was a raw masculine power about him that instantly made her thong wet and her nipples harden to painful points. And when they’d danced, she could feel his erection pressing into her and the heat of his hand on her back.

Sleeping Handsome by Jean Haus
The Lion Rampant by Robert Low
Elemental Love by L.M. Somerton
The Axe and the Throne by M. D. Ireman
Tumbleweed by Heather Huffman
The Prince Charming List by Kathryn Springer
The Junction of Sunshine and Lucky by Holly Schindler
Thea Devine by Relentless Passion
The Pirate Fairy by A.J. Llewellyn
Winter by John Marsden