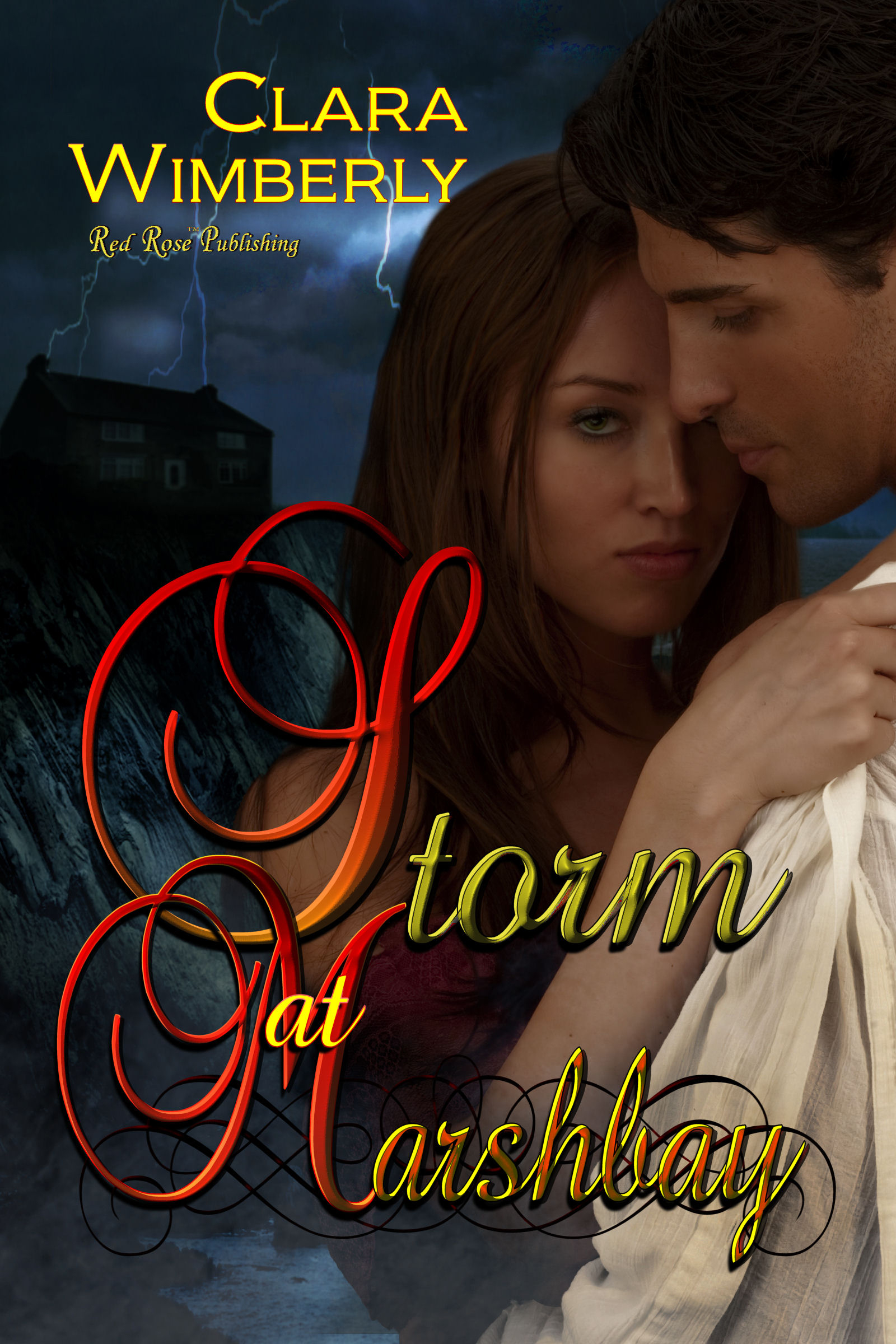 Storm at Marshbay by Clara Wimberly

Publishing with a touch of Class! ™

Thank you for purchasing a book from Red Rose™ Publishing where publishing comes with a touch of Class!

It was a warm spring evening in 1893, when I first saw the house at Marshbay, although I’d heard stories about it as long as I could remember. When I was a young girl I loved hearing about the wealthy Fitzgerald family who lived there. My  imagination would send me into a world of delightful daydreams where I thought of what it must be like to live in that house.

Those were only daydreams, but never did I think I would actually be invited there even though I certainly had enjoyed pretending to be one of those elegantly dressed women whose ball gowns glittered beneath the gas lit chandeliers.

I had not grown up in a society or even a household where men openly admired women and cared for them lovingly, though I’d read about such men in books. I’d also seen men smiling at the woman on their arm in pictures in the society columns of newspapers. But that kind of behavior was not something I’d ever personally known from a man, certainly not from my own father.

I wanted to love him, but his behavior caused me to fear him instead. When he drank, he was often cruel and verbally abusive— vicious even. I learned to stay out of his way at an early age.

“Isabella,” he would say in that stern, lecturing voice of his, “a woman must use her beauty to get ahead in this world. An inquisitive mind such as yours will do you more harm than good. So you’d best learn to hide any intelligence or curiosity you have if you expect to find a husband.”

I hoped with all my heart he was wrong. There had to be married people who loved each other and men who treated their wives with respect, their children with kindness. Father’s words often made me cringe. Inside I would be seething, though outwardly I took care to appear obedient and respectful, for Jacob Brady could be a cruel, hard man. No one crossed him. Not my mother and certainly not me.

I had no idea until a few days ago that I would be going to Marshbay, the Fitzgerald’s summer home by the sea. My mother had called me into her bedroom and told me of the invitation.

For the first time I saw the beautiful dress of white silk that I now wore. That day in Mother’s room it lay spread across the foot of her bed. The skirt was appliquéd with lace roses and sprinkled with seed pearls. It was like no dress I had ever owned or ever hoped to wear. Its beauty fairly took my breath away, making me speechless with wonder.

She smiled. “It was your father’s doing, although I confess I was surprised that the Fitzgeralds would still remember after all this time. And more surprised that, with your father no longer alive, they would nevertheless honor the pact they’d made with him. On a wager, no less. One I would never had known about if they hadn’t honored that pact.”

“But, Mother, there must be more to it than that. What would Mr. Fitzgerald have to gain from any kind of wager with father?”

“Now don’t say anything more until you’ve heard me out,” she said. “I know how you felt about your father’s gambling. Apparently, years ago, during a game of cards, he and Mr. Fitzgerald entered into a wager. Part of the wager, if your father won, was that you would be invited, to the house at Marshbay.  So you see Bella, your father did care for you, no matter how much you doubted it. He wanted nothing more than to see you situated in the very best position possible.”

“What do you mean by position?” I asked. “Are you saying the Fitzgerald’s are offering me employment at Marshbay?”

“You must wait and see.”

“I don’t understand. If I am to be employed there, why would they invite me to the ball?”

“I’m sure it will all be made clear to you once you arrive at the house.”

Mother sighed, her small white hands fluttering in the air as if she were too tired to go on talking.

Since her illness she sometimes acted strange and her speech was often confused and wandering. Doctor Leavy said it was from the medication he gave her for pain.

I knew it was time to let her rest, but as I started to leave, she spoke again.

“You are a grown woman now Isabella.  A beautiful young woman.”

“Are you asking me to believe  its normal for people like the Fitzgeralds to invite someone like me to their ball?  They have no idea who I am. I can’t possibly be of any significance to them.

She  smiled. “Oh, they know who you are, have no doubt of that.”

I sighed. “The dress is lovely and the idea of going to a party at the Fitzgerald home is intriguing. But how can I enjoy it? Going there, meeting people I’ve never seen before— I won’t know how to act. I don’t think I can do it.”

“You must.” Her stern voice surprised me. “You must promise me.”

I gave a reluctant nod.

“Sit here beside me, my dear.”

I sat on the bed and took both her hands in mine. Her skin felt warm and dry and the bones beneath seemed as small and delicate as a bird’s. As I looked into her eyes, faded now to a pale blue by age and illness, I felt an aching catch in my throat. The person my mother had once been barely existed any more. It was like looking into the eyes of a helpless child.

“Listen to me, Isabella,” she said. “This could be the chance of a lifetime for you. Do you have any idea of the influence they hold in this community? Or what kind of life you could have living in that house?”

I started to protest, but she stopped me, pulled her hands from mine and waved them in the air again. “I will hear no more arguments about it. This is what your father wanted. What I want. Whatever you have to do for a chance to live at Marshbay, you must do it. Do you understand?”

I’d never seen my mother so intense. The medication she took almost hourly kept her emotions tamped down, at the same time keeping her worries and anxieties on a level where they would not, as the doctor put it, damage her fragile health any further. I could see what physical exertion it took for her to push through the effects of the medicine and say these things to me. So it was obvious how important this was to her. I knew she worried about my future and my well-being.

It was for those reasons that, as curious as I was, I didn’t pursue the matter further.

“Anything— any suggestion they make to you as to your future welfare, you will agree. Do you promise me that?”

“Please,” she said, squeezing my hand, “Indulge me.”

I sighed, bent closer to her and pulled the covers up over her. “Yes, I promise. I will do what’s best for both of us. Don’t worry yourself about it any longer. Rest, now— you need to rest.”

Relief spread over her face and she closed her eyes. When she quickly drifted off to sleep, I knew I’d made the right decision. But I couldn’t help worrying, wondering how I’d be able to bear the loneliness when she was gone.

I gazed from the windows of the coach that carried me along the sandy road through the South Carolina marsh. Sunset bathed the tops of the palmettos in a warm array of amber light. A spring breeze blew in from the ocean, rustling the marsh grass and stirring rose mallow shrubs. How I loved it here, away from everything civilized.

Yet I wore a beautiful white gown, my destination an elegant Marshbay ball, to me the epitome of civilization.  My transformation all happened so fast that I was fairly reeling.

The wind carried the smell of the ocean’s salty tang into the carriage and I drew in a deep breath of it, smiling. What awaited me at Marshbay? My heart beat faster as we neared the house.

I smoothed my hands down the skirt of my dress. Would the Fitzgeralds find me foolishly presumptuous in such an elegant gown? After all I was only the daughter of a shopkeeper— an unexceptional young woman, growing close to an age when I would be considered a spinster by some people.

“The house is just ahead, Miss,” the driver shouted through the window that separated him from the passenger compartment.

The lights of the house glittered through the trees and the waving strands of gray Spanish moss that hung from them. I sat forward in the seat, my hand clinging to the strap beside the curtained windows.

We moved past one last line of trees and there it was.

“
Marshbay.”
The name whispered through my lips unbidden.

The place was like nothing I’d ever seen before. This was no typical white colonnaded southern mansion. Lit by the last remnants of the afternoon sun, the house resembled more a fortress or a prison than it did a gracious southern home. It was low, a vast ramble of sand-colored masonry buildings with a square tower at the front that rose fifty feet above the ground. A long, straight driveway to the house lay between rows of tall palm trees.

This was a fantasy house, a Moorish fortress that melded building to marsh and sea, a place of mystery with windows covered by ornate, spiked wrought iron. Atop the building, small turrets with open windows sat, like dozens of eyes, facing the ocean. I held my breath as the sun crept down the turrets, fading them slowly to gray. In that moment, the house seemed almost to live and  breathe.

When we stopped at the front, I pulled my white lace shawl tighter about my shoulders. I took the driver’s outstretched hand and stepped down from the coach. It pulled away and I was left standing before two huge oak doors flanked by doormen.

I felt as alone as I’d ever felt in my life. For a moment I actually thought of running after the coach and going home as quickly as the horses could carry me. But I remembered the promise I had made to my mother and I could not disappoint her.

Taking a deep breath, I brushed my hand over the material of my gown before reaching back and pulling the bustled train up. I lifted my head and walked toward those doors as if I’d done it a hundred times. When I reached the top of the steps, two men, dressed in livery, stepped forward, each grasping one of the huge doors and opening them, bowing slightly to me as I stepped into the house.