Read Strength of the Pack Online

Strength of the Pack 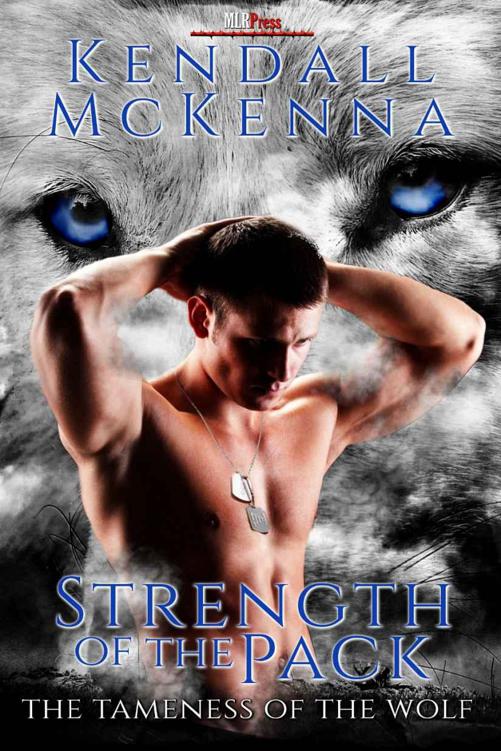 STRENGTH OF THE PACK

STRENGTH OF THE PACK

The Tameness of the Wolf – Book One

Lieutenant Lucas Young doesn’t know much about shifters. When Sergeant Noah Hammond is assigned to Lucas’ platoon, the Marine Corps’ True Alpha werewolf challenges the Lieutenant’s authority and his self-control. As Lucas learns to dominate and command Noah, he struggles against a strong attraction and deepening emotional bond.

During their combat deployment to Afghanistan, Lucas and Noah begin mirroring legendary partnerships. Their bond and their power grow as they survive dangerous combat and ambushes. When one of them is wounded in battle, they both must embrace the strength of their bond before they lose each other forever.

This book is licensed to the original purchaser only. Duplication or distribution via any means is illegal and a violation of International Copyright Law, subject to criminal prosecution and upon conviction, fines and/or imprisonment. This eBook cannot be legally loaned or given to others. No part of this eBook can be shared or reproduced without the express permission of the publisher.

Anna Sikorska, who asked if I thought I could write shapeshifting Marines. When I said I could try, she gave me the original premise of this story on which to build. This story exists only because she asked.

USMC, a group of dedicated men and women who continue to grow and evolve, serve and sacrifice. Their intelligence, complexity, competence, and ability to ‘adapt and overcome’ continue to provide me with the kind of drama and conflict that makes for good fiction.

For the mission’s sake, for our country’s sake, and the sake of the men who carried the Division’s colors in past battles — “who fought for life and never lost their nerve” — carry out your mission and keep your honor clean. Demonstrate to the world there is “No Better Friend — No Worse Enemy” than a US Marine.

Agnieszka Siemieńska read nearly every word of this story as it was written. She provided nothing but encouragement during the first draft. She was instrumental in the crafting of the character of Tim Madison, and by extension, the story ideas that eventually led to a one-off becoming a series. Her help didn’t stop there. As the primary beta-reader, she was highly demanding and critical of the characters, the story, and the mythology that I built around my shifters. She lets me get away with nothing.

Beth McCombs was the critical set of eyes that came along at the end and found the small things that those of us who were too close to the story could no longer see.

“He’s mad that trusts in the tameness of a wolf, a horse’s health, a boy’s love, or a whore’s oath.”

Lucas hefted his eighty-pound rucksack and slid the straps over his shoulders. Marine Corps standards said fifty pounds was the maximum a Marine could carry and maintain combat effectiveness. Lucas had already deployed once to Afghanistan, and he knew, first hand, that limitation was never observed or enforced. He intended to have his men ready to deal with whatever the war threw at them once they reached Afghanistan, and that meant having the endurance to hump twenty miles wearing eighty pounds of gear.

Gunnery Sergeant Vincent McAlister stepped up to check Lucas’ pack and ensure he had access to his camelbak. They were stepping off in the cool morning, but the Oceanside afternoon was going to be in the high nineties. He and his Marines were going to have to stay hydrated.

Lucas pressed the button on his chest to activate his radio. “Fox-two, radio check,” he used the call sign he would carry for the duration of their mission in Afghanistan.

Pulling the bill of his eight-pointed utility cover lower over his eyes, Lucas stepped in front of his platoon and stood at the edge of the parade ground. He watched his men adjust gear and conduct buddy checks, as he and Gunny McAlister had done. Even though he would trail the platoon in a Humvee— just in case of an emergency— Vince made sure Lucas’ gear was in good order and that he was squared away for the march.

“All right, listen up, gents,” he called sharply, getting their attention. “Ten miles out, ten miles back.” Lucas swept a look over his Marines. “Yes, we will be taking Cardiac Hill.”

“Last one up buys the beer,” shouted Sergeant Viejo from the back of the group.

“Anybody who pukes has to buy the beer for the next month,” amended Corporal Daniel Branch. His pronouncement was met with enthusiastic agreement.

“That’s enough,” Lucas said, over the ruckus. “Sergeant Fowler, call it out.”

“Aye aye, sir.” Sergeant Chad Fowler was Lucas’ most experienced NCO. He was steady and solid as a rock.

His platoon quickly formed two columns with Fowler falling into step to the side and beginning to call out a cadence. The platoon echoed and replied on cue. Lucas fell into step slightly behind Sergeant Fowler. The heat was climbing, and his pack was already weighing him down, but he’d be damned if he’d send his Gunny out to run with his men while he followed along in the Humvee.

Lucas watched his men settle into the pace. There weren’t that many of them; their ranks weren’t filled yet. He was getting new Marines every day, and they’d be at full platoon strength of twenty-two men by the time they shipped out to Afghanistan.

Five miles in, and the burn in Lucas’ legs had given way to the endorphin rush. Their LPCs, leather personnel carriers, were all covered with the endless, pale dust that drenched every inch of the base. The sun was creeping steadily higher, and the heat would only get more intense. There was no shade to provide relief, the only foliage was sparse scrub and hard Manzanita. Sweat ran down Lucas’ face and neck in rivulets, soaking through his uniform. The worst was still to come.

He glanced at Private First Class Dane Catinella. The newest member of the platoon was fresh from boot camp, and if anyone was going to struggle through this march, it would be him.

The platoon came around a turn in the trail, and Lucas saw Vince and the Humvee parked just ahead. If any of the men showed signs of heat stroke or dehydration, the Gunny would look after them and give them a ride back to barracks.

The point was
not
to kill Marines during training; it was to make them hard enough to come home alive.

Lucas signaled Vince that they were all good to continue on. He took a long drink from his camelbak, knowing he couldn’t command his platoon if he didn’t look after himself. The water was warm and already tasted stale, but at least it cleared the dust and dirt from Lucas’ throat.

Up ahead, Camp Pendleton’s notorious Cardiac Hill came into view. Lucas looked and saw Catinella was already falling behind. He dropped back into step beside him.

“How you doing, Marine?” he asked.

There was a telling pause. “Yes, sir.”

Lucas grabbed the line of his own camelbak. “Better drink now before we start up the hill,” he ordered.

Catinella fumbled for his camelbak, finally getting it to his mouth. Lucas let him drink several mouthfuls before stopping him. Too much water would have him puking halfway up the hill.

Lucas remembered his first run up Cardiac Hill. It was well named; he’d been sure he was going to die from a heart attack. It was just the type of challenge he’d wanted when he’d accepted his commission. The Marine Corps was the only thing that had ever challenged Lucas. It was the first thing he’d ever had to truly work for.

Catinella fell farther behind as the platoon charged up the hill. Lucas hung back with him, but he wasn’t alone. Viejo and Rodriguez slowed their paces to accompany the struggling Private.

The two Marines began encouraging Catinella as the four of them started up the hill. They promised him he
could
make it, and they would stay with him to make sure he did. Lucas kept an eye on the private, watching for signs of over-exertion or dehydration. Catinella panted loudly, his face bright red, but he kept pushing up the hill.

It took twice as long as the rest of the platoon, but he made it to the top, cheered on by his fellow Marines. Lucas had to bite back a smile at the sight of Catinella beaming under the back-slapping praise of Viejo and Rodriguez.

Sergeant Fowler had slowed the platoon’s pace to allow the rest of them to catch up. By the time they reached Vince and the Humvee, they were back in formation. Lucas’ heart nearly burst with pride for his men, their determination and their teamwork.

At the ten-mile mark, Lucas made a change. “Rodriguez, take up the cadence.”

Rodriguez fell into step with Fowler who dropped into formation once the cadence was taken up. The sun beat down on Lucas relentlessly. The straps of his ruck pulled heavily on his shoulders. Lucas breathed heavily through his mouth and ignored the pain. That pain didn’t matter anyway.

By the time they returned to the parade ground, Lucas’ ruck felt like it weighed twice as much as it really did. He’d drained his camelbak in the final stretch. Every muscle ached, and his lungs burned, but he’d pushed through it along with his Marines.

Broken (Endurance) by Thomas, April
Lonzo: Book 2 (Tycoon Series Book 2) by Kat Madrid
Another Love by Amanda Prowse
Wicked Kiss (Nightwatchers) by Rowen, Michelle
In the Eye of a Storm by Mary Mageau
Sex and the Widow Miles (The Women of Willow Bay) by Reinhardt, Nan
WHO KILLED EMMALINE? by Dani Matthews
Berrr's Vow by Laurann Dohner
The Nightmare by Lars Kepler
rock by Anyta Sunday