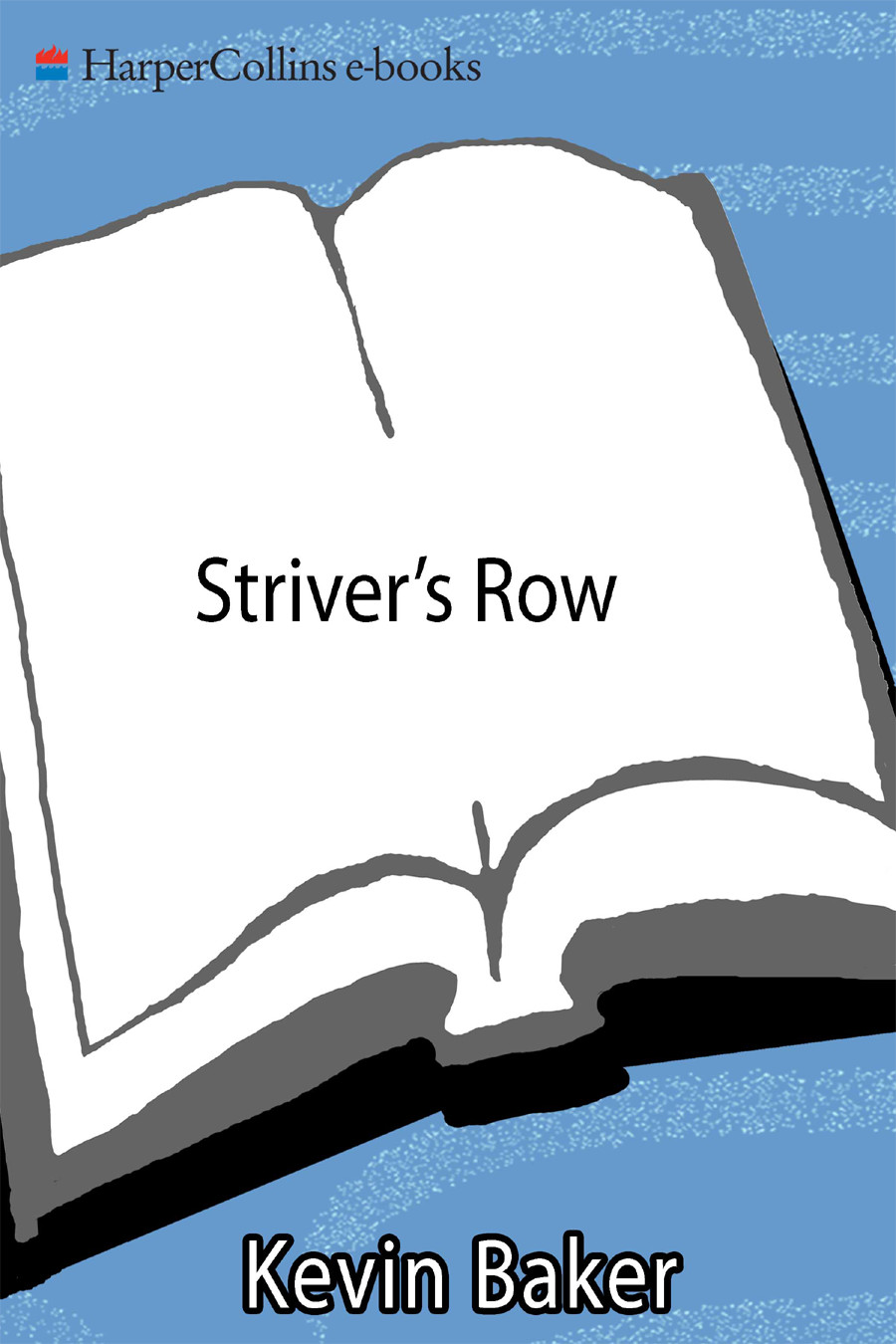 To my mother, Claire Slade Baker,
with all my love,
for all that she has given me throughout my life,
and as always
to Ellenâ
Je t'adore

A GLOSSARY OF NAMES, WORDS, AND EXPRESSIONS

ACKNOWLEDGMENTS, AND A NOTE ON SOURCES

Malcolm Jarvis,
a friend of Malcolm Little's, from Roxbury
Laura,
another friend from Roxbury

Patched and tarred. Hawked and bitten in the winter, smothered and melted in the heat.

Under its broad skies, pincered between two rivers. Within sight of salvation, the city's lights, the jeweled bridges. Battered and besieged, on its knees but unbowed. With blood in its mouthâ

Harlem waits,
and listens for its savior.

He thought about the rabbits sometimes, lying awake at night in the little room in Ella's house, under the eaves.

It had been back in West Lansing, when he was twelve years old, just after his mother had taken ill and they had all been split up. A Sunday afternoon in the late fall, nearly winter. The smell of something burning off in the distance. The men and boys walking through the yellowed grass, holding the straining dogs tight on their leashes. Malcolm was walking with Mr. Gohannas and Big Boy, dangling the .22 off his hip, trying to whip it all about like he'd seen the gunfighters do in the Western serials. He held it to his eye and aimed it here, there, even at the backs of the men around him, until one of them turned and caught him.

“You watch that gun, boy,” he scolded. “Don't you be pointing it at nobody!”

Malcolm had dropped his head down, holding the gun steadier, glancing up furtively now at the other men to see if they had noticed his shame. All of them darker than he was, their skin the color of burnt coffee or railroad coal, faces lined and creased like worn car seats. Wearing their field overalls and work boots, redolent with the scent of men's sweat and dirt. Some of them with their boys next to themâwearing their handed-down overalls; faces exactly the same only smoother, as if all the creases had been ironed out. Their ragged hair knotted up in burrs and tangles, like the farmers they were and would always be.

“Get ready now,” Mr. Gohannas told them, his voice urgent though still kindly.

The men stopped at the edge of an open field. At its far end Malcolm could make out a tangled clump of bent scrub trees, and thorn bushes. The men looked at each other, a few of them nodding solemnly, then they let the dogs go and began to fan out, kneeling in the high grass.

The loosed dogs had run straight toward the thicket, baying and scuffling their way in past the lowered tree branches. There was silence for a few, long momentsâthen the renewed sound of pounding feet, as the first rabbits flew out from the bushes. Lean, gray, winter hares, leaping ahead with their eyes wide and their long ears back, the dogs scrambling after them.

“Easy now,” the man nearest to Malcolm whispered tenderly to his son, a boy younger than Malcolm was, toting a shotgun.

Leaving the hounds still immersed in the brambles, the hares made a wide, panicked bolt around the perimeter of the field. Running so fast and hard that Malcolm thought they must surely escapeâthe only sound their powerful, widened winter feet thumping softly over the grass. He could not understand why the men hadn't fired, all these old, slow, black men still staring out from the bushes, and he rose as if to run after the rabbits. But then he felt Mr. Gohannas's hand on his arm, pulling him back downâand sure enough, the hares turned and headed back, toward their hidey-holes in the thicket.

“Now!” the man next to him exclaimed, and his boy fired the crude old shotgun. The blast knocked him flat on his back but the bird-shot picked off one of the galloping hares in midair, flipping his thin gray rabbit body head over heels, leaving him to twitch and heave on the ground.

The rest of the men and boys fired at nearly the same timeâ a fusillade from all their battered, ancient guns that stunned and nearly deafened Malcolm. He shut his eyes, and lowered his head against the noise. When he looked up again he could see five or six more hares on the ground. The younger boys already running out to claim theirs, picking them up by their long ears and smashing their heads with lengths of lead pipe if they were still moving, an act that made Malcolm look away, and his stomach turn over.

“Here now,” Mr. Gohannas told him, placing a gentle hand on his chest and turning him around.

The dogs were already flushing the thicket again, and a few minutes later out came more hares. Running slower and a little raggedly this time, if just as frightened. For all of their fear they ran in the exact same direction, around the edge of the field. Making the same long loop back to their homes, the men firing and yelling exultantly as they turned.

Malcolm fired wildly himself, his shot rustling the branches in some nearby trees, the men nearest to him snorting in surprise and indignationâ

âbut he had an idea now. The dogs went in to flush the hares a third timeâboth dogs and hares moving noticeably slower nowâ and after he reloaded Malcolm scrambled out of the blind before Mr. Gohannas could stop him, Big Boy calling plaintively after him.

He was already running up along the border of the field, his cracked, patent leather city shoes slipping along the dead winter grass. He ran to a spot that was halfway along the hares' trajectory, as best he could figure it, just before the point where they were bound to turn and head back to their thicket. He heard the alarmed shouts of the men behind him, but he ignored them. Kneeling and aiming carefully this time, taking down one hare, then another, before they ever got back within range of the rest of the hunters. The exhausted creatures always flipping over the same way, their long back feet catapulting them over in one final, cinematic somersault.

When the shooting stopped it was Malcolm who ran out after them this time, plucking his hares up by their big ears. Ignoring the continuing, angry shouts of the older, blacker menâsmiling to himself, to think how he had been able to figure it out when the rest of them had not. They broke cover and ran up to him, Mr. Gohannas among them, his wide, brown face looking uncomfortable behind his spectacles.

“
Ev'rybody's
supposed to get a fair shot! Movin' up like that!”

They scowled at him, outraged, until one of them nudged the shoulder of the man beside him.

They stayed where they were, looking down at him, but with their faces changed now into something softer, even sorrowful.

“Wit' the mother.
You
knowâ”

“You know how to handle a rifle. Reg'lar Dead-Eye Dick.”

Malcolm basked in their compliments, no longer trying to keep from grinning. Mr. Gohannas looked relieved.

He stayed out ahead of them for the rest of the day, making sure to move up whenever they came to a new thicket, to where the hares made their turn. Sometimes he even allowed Big Boy to come with him, and bag a hare or two himself with the old beebee gun Mr. Gohannas had entrusted to him. He hauled along his growing brace until his arms ached under their weight. There were at least a dozen of them, the rabbit blood streaking his worn-out corduroys and its smell making him feel dizzy again, but he would not give them up.

“This's enough to feed all of them,” he told his foster father, his voice brimming with excitement and triumph. “Once I get 'em skinned an' cut up, it's enough to feed 'em all! An' maybe we can take some over to Mama on Sundayâ”

And Mr. Gohannas had smiled down at him, and touched his cheek, and told him, “Yes, son, I believe we could do that.”

All the rest of that day he had stayed out in front of them, until it got too cold and too dark to see the hares in the gray, winter evening. What he could never understandânot even to this day, lying in the upstairs room under the eaves of Ella's immaculate houseâ was how they had failed to figure it out. Glancing back at the others, through the gloom of the winter evening, their faces brown blurs in the underbrush. Wondering at how it was that all of these grown men, some of them with gray in their burred hair, could not figure out what he hadâthat when the hares turned back, all you had to do was move up a little to get to them first. The thought growing in him like something dirty, dark, and forbidden and only half-acknowledged at first. Then becoming conscious, causing him to smirk despite himself as he put it into words, spreading all through his being as he looked down at the somewhat lighter, reddish skin on his arms, by the light of his little lamp under the eaves:

The niggers. The stupid old niggers.

Best Of My Love (Home to Green Valley Book 4) by Virna DePaul
Beasts Within by Lexi Lewis
Under Their Protection by Bailey, J.A.
Adventurers Wanted 2) The Horn of Moran by M.L. Forman
My Guardian Knight by Lynette Marie
The Lady Vanished by Gretta Mulrooney
Secrets by Francine Pascal
Indiscretions by Madelynne Ellis
Crimson Joy by Robert B. Parker
A Field Guide for Heartbreakers by Kristen Tracy