Read Summer According to Humphrey Online

Summer According to Humphrey 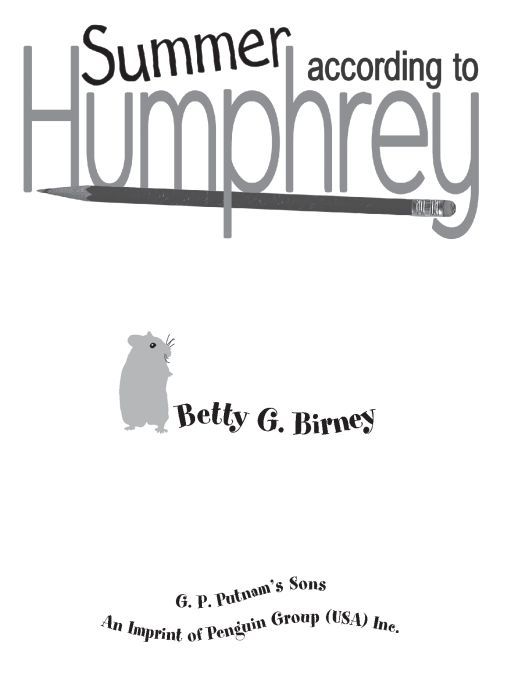 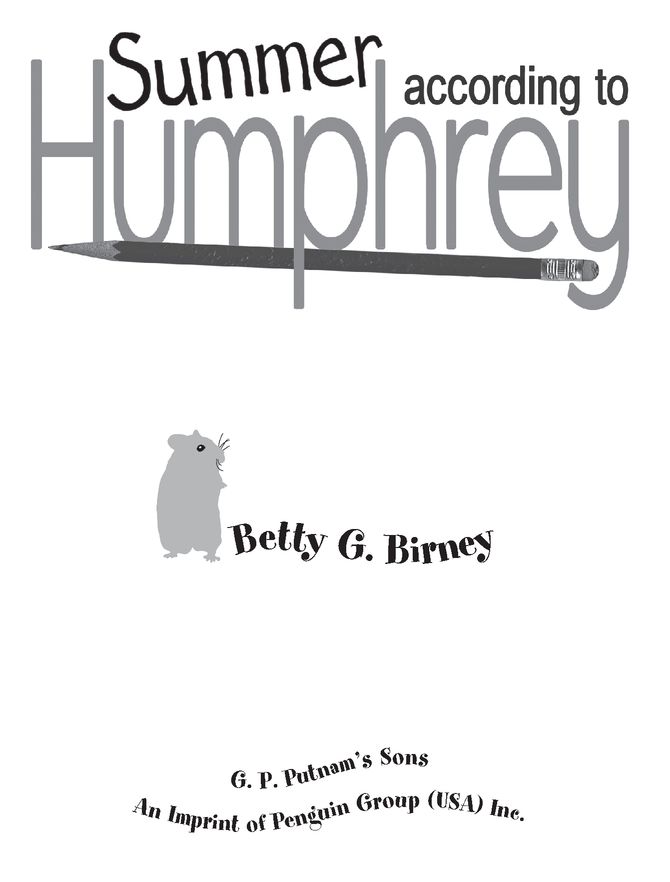 To Desi, with thanks—
“You can learn a lot about yourself
by taking care of another species.”
1
The End (of School)
I
t was a warm afternoon and there was a lovely ray of sunlight beaming into my cage, as golden as my fur. It made me feel so cozy and dozy, I guess I nodded off during science class. The last thing I remembered Mrs. Brisbane saying was “cumulus clouds.” Then I was floating away on my own fluffy little cloud, as peaceful as a hamster can be.
Until
I was awakened by a LOUD-LOUD-LOUD voice that could only belong to my classmate Lower-Your-Voice-A.J.
“How many more days are there?” he boomed.
“Four,” Mrs. Brisbane answered.
I opened one eye and listened carefully.
“Just four days until the end of school,” she continued.
I opened both eyes, jumped up and let out a loud “eeek!”
“Sounds like Humphrey Dumpty is anxious for school to be out,” A.J. said. “Like me!”
The end of school?
Did she mean that there wouldn’t be school EVER-EVER-EVER again? Or was it just another holiday?
“I will miss you,” the teacher said. “But it’s time to move on.”
Move on? Can a school move?
“Og?” I squeaked to my neighbor. “Did you hear that?”
Og splashed in his tank a little, then let out a loud “BOING!” That’s the twangy way green frogs like him talk.
Stop-Giggling-Gail giggled. “I guess Og is ready for summer, too!”
“Hands, please, class,” Mrs. Brisbane reminded her students. She wouldn’t be able to remind them much longer. “Yes, Kirk?”
“May I please tell a summer joke?” he asked. At least I-Heard-That-Kirk Chen had learned not to blurt out his jokes without asking.
“Yes, if it’s short,” Mrs. Brisbane told him.
“What did the pig say on the beach on a hot summer day?” he asked.
“I don’t know,” the teacher admitted.
“I’m
bakin’
! Get it? Like, I’m
bacon
!” Kirk proudly explained.
“I get it,” Mrs. Brisbane said.
Gail giggled again, of course, along with her best friend, Heidi.
There was a shuffle of feet as the clock moved toward the end of the school day.
“Wait-for-the-Bell-Garth,” Mrs. Brisbane told Garth Tugwell. He was always the first one out of his chair.
As soon as he sat down, the bell rang and with plenty of clattering and chattering, my friends in Room 26 hurried out of the room. While they hurried, I worried.
Was it the end of Longfellow School forever?
What would everyone
do
??
And most importantly, where would Og and I go?
What does a classroom pet do when his job is over?
Mrs. Brisbane straightened up her desk, the way she usually did when school was over for the day. She didn’t seem bothered about the end of school. In fact, she was humming a happy tune.
I didn’t feel like humming.
Maybe Og and I would go live with Mrs. Brisbane and her husband, Bert. I enjoyed staying at their house, but I didn’t want to be there all the time without my friends around. How I’d miss Sayeh and Art and Seth and Tabitha and Miranda. Miranda! I could hardly imagine not seeing Golden-Miranda again.
“Eeek!” I squeaked. Again. It just slipped out.
Mrs. Brisbane heard me and walked over to the table by the window where Og and I lived.
“I guess you fellows are wondering what you’ll be doing when school is over,” she said.
“RIGHT-RIGHT-RIGHT!” I replied, although all that came out was “SQUEAK-SQUEAK-SQUEAK” as usual.
“Well, I can’t tell you because it’s a surprise,” she said.
And then, humming her little tune, Mrs. Brisbane left Room 26 for the day, and left me with a lot to think about.

While my mind raced, I suddenly noticed that it was warm in Room 26. Even a little bit hot. I almost wished I could take off my fur coat. Or that I could swim around in nice cool water like Og. (Not that I ever would, since hamsters should never, I mean
never,
get wet.)
And I’d been noticing for a while that the sky was staying light longer, which makes life a little difficult for a nocturnal creature like me, who looks forward to nighttime.
One reason I look forward to nighttime is because Aldo comes into Room 26 to clean.
“Greetings, friends! You are looking at a happy fellow,” he announced as he pushed his cleaning cart into the classroom.
Aldo always seemed like a happy fellow, but that night, he seemed even happier than usual.
“Hi, Aldo! What’s new?” I squeaked.
Og added a friendly “BOING!”
“School is out for me! It’s over!” He was beaming happily. “And my grades were very good. Even Spanish!”
“Way to go, Aldo!” I squeaked. Aldo cleans at night but goes to school during the day so he can be a teacher someday. He had a little trouble with his Spanish class earlier in the year, so I was happy for him.
I thought for a moment, trying to remember the Spanish word for “good.”
“¡Bueno!”
I added.
“School’s out, school’s out. Teacher let the mules out,” he said with a laugh.
I had no idea there were mules at Aldo’s college!
Mrs. Brisbane had been humming earlier in the day and now Aldo whistled as he briskly swept the floors and dusted the furniture. The end of school sure made people musical.
When he was finished, he pulled a chair up close to my cage and Og’s tank and took out his dinner.
“No more eating out of paper bags for a while,” he said, taking a large bite out of his sandwich.
I liked to watch Aldo eat. His big black mustache made it difficult to see his mouth, so when he ate, the food just seemed to disappear.
“No, my friends,” he said. “When Longfellow School closes next week, I’m leaving town! I’m out of here.”
I shivered, even though it was hot. There would be no more school
and
no more Aldo?
“Here, buddy, have a carrot,” Aldo said, slipping me a crunchy treat as he did every night.
No more treats, either, I thought.
It wasn’t just the end of school. It was the end of life as I’d known it.

“Can you believe it, Sue?” our principal, Mr. Morales, asked the next morning before class began. “Three days until it’s all over.” Mr. Morales had a collection of special ties, and today, he was wearing a blue one with bright yellow suns on it.
He seemed happy about the end of school, too. But what does a principal do if he doesn’t have a school to go to every day?
“The whole family’s going to hit the road,” he said. “What about you and Bert?”

Of Heroes And Villains (Book 4) by Julius St. Clair
Secret Confessions: Sydney Housewives--Willow by Christina Phillips
Shadow Wolf by Jenna Kernan
Hear No Evil by Bethany Campbell
Vicarious (The Vicarious Trilogy) by Annin, Sina
The Arrangement by Ashley Warlick
Jill by Philip Larkin
Just One Week (Just One Song) by Lynn, Stacey
Mine To Have (Mine - Romantic Suspense Book 5) by Cynthia Eden
Rent A Husband by Mason, Sally