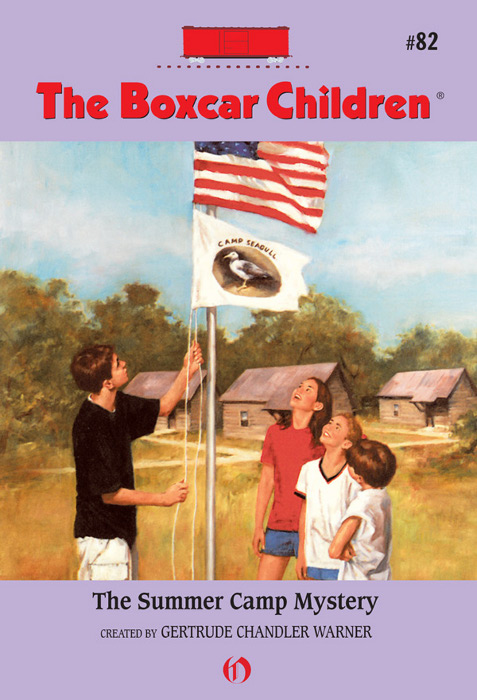 1. Shapes in the Fog

2. Screams on the Beach

5. Footprints in the Sand

CHAPTER 1
Shapes in the Fog

At five o’clock on an August morning, the sun hadn’t risen yet, but the Alden family was already up and about. The streetlamps were still on. In a few minutes, the headlights on James Alden’s car were on, too.

Four sleepy children trooped down the porch steps of the big white house where they lived. They joined their grandfather, who was already in the car.

“Buckle up, everyone,” Grandfather Alden said. “We want to get an early start driving to Maine.”

One by one, Henry, Jessie, Violet, and six-year-old Benny Alden slipped into Grandfather’s car. They buckled themselves in.

Mr. Alden backed out slowly. He didn’t want to scrape the bottom of his car. It was riding low, loaded down with camp trunks, backpacks, and the five Aldens.

The family housekeeper, Mrs. McGregor, stood by the driveway holding on to Watch, the family dog. “Good-bye, children,” Mrs. McGregor said. “Have fun at Camp Seagull. Don’t eat too much lobster!”

Twelve-year-old Jessie tried not to yawn. She’d barely had time to braid her long brown hair and find her Junior Counselor cap. “Good-bye, Mrs. McGregor. Take good care of Watch for me.”

Watch looked at the car with his saddest face. He whined softly, the way he always did when he was left behind. 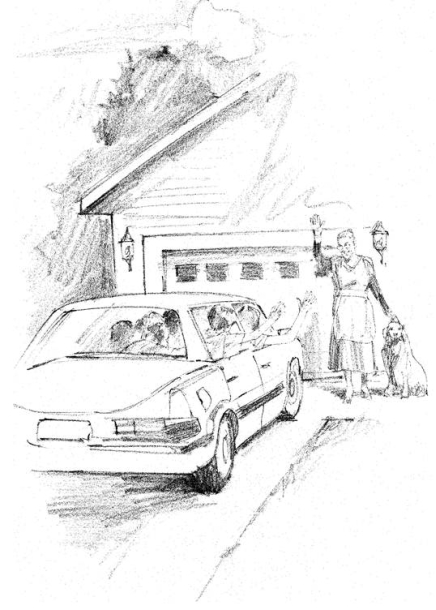 “Watch wants to come to Camp Seagull with us, too,” Jessie said with a little catch in her voice. “I’m going to miss having him sleep at the foot of my bed.”

Benny took one last look at Watch and Mrs. McGregor before Mr. Alden pulled away. “Too bad Watch can’t be a camper, too. Remember how he found us in our boxcar in the woods — even before you found us, Grandfather?”

Mr. Alden smiled. Benny was quite a chatterbox, even at five o’clock in the morning. “You won’t need Watch for company, Benny. The camp is filled with children your age.”

“Jessie and I will be right there as Junior Counselors,” fourteen-year-old Henry told Benny. “Violet is a camper, too.”

“Don’t forget,” Grandfather Alden said to Benny, “at the end of each day at camp, you’ll be joining me at the Dark Harbor Inn.”

Violet, who was ten, thought about this. “But the rest of us will be away for the whole week since we’re overnight campers. I’m going to miss you, Grandfather.”

“And I’ll miss you,” Mr. Alden said in a quiet voice. “While I catch up on my reading, you can catch up on your painting and your crafts.”

Violet’s eyes brightened. “I’m going to spend as much time as I can in the art studio at camp.”

Jessie was bubbling with plans. “I’m so glad Ginny and Rich Gullen found room for us in this session of Camp Seagull, Grandfather. There’s so much going on. Last night, I looked over the counselor manual again. There’s waterskiing, Costume Night, swimming, storytelling, arts and crafts, sports — you name it.”

Everyone in the car laughed. Who else in the Alden family would be thinking about food so early in the morning?

“I know. I never go hungry. See?” Benny pulled a bag from the backpack at his feet.

“Mrs. McGregor said it was a long way to Maine. I wanted to be ready, so I packed some trail mix.”

“But Benny, we’re not going on any trails today,” Henry pointed out. “Not until we get out to Claw Island, where Camp Seagull is. You don’t need trail mix riding in a car.”

Just as the sun came up, Mr. Alden turned onto the busy highway going north. “Off we go, children!”

By the time Mr. Alden drove into northern Maine, the gas tank was nearly empty. As for the picnic basket Mrs. McGregor had sent along, that was nearly empty, too. And so was Benny’s trail mix bag.

Mr. Alden shifted in his seat. He’d been driving a long time. “We’re practically there, children. Now that we’re off the main highway, let’s look for road signs. There’s some fog rolling in. I don’t want to miss the turnoff for the Claw Island ferry. It’s just outside Dark Harbor. I went there all the time when I was a boy.”

“Now Henry and I are the boys!” Benny said proudly. “And we’re visiting Claw Island just like you did.”

“Right you are.” Grandfather smiled to himself. “Only there wasn’t a camp on the island back then, just the old Pines estate that the family owned, along with some deserted buildings. Many a time my chums and I would go out to Claw Island to explore and play games.”

“Just like us — if we ever get there.” Benny pressed his forehead against the window.

Violet stared out, too. “The fog has swallowed up everything except for the pointy pine trees.”

“Look! There’s a sign!” Benny made a claw with his hand. “Why is it called Claw Island, anyway?”

“If you look at a map, you can see the island is shaped like a lobster claw,” Jessie explained.

Mr. Alden turned onto a sandy beach road. “And so it was in my grandmother’s day. Only back then it was called Claw Point, not Claw Island. It was still connected to the mainland just outside Dark Harbor. One summer, Grandmother returned to discover the ocean had washed away the road. Two hurricanes later, the ocean covered over the beach and the dunes in between.”

Jessie flipped through the Camp Seagull manual. “It says here that after the second hurricane, the Pines family turned their property into a camp. Then last winter they sold it to Rich and Ginny Gullen, the new owners.”

Mr. Alden drove slowly down the dirt road. “I hope the Gullens make a go of it. Rich told me the Pines family found it difficult running a camp on the island. They had to sell it because they lost too much money. As you can see, it’s not an easy place to get to. It can only be reached by boat. People travel out on the small passenger ferry. Camp supplies go on the freight boat once a week.”

“We’re on the people boat,” Benny said. “I just hope the food boat doesn’t get lost.”

Grandfather smiled. “That’s not likely to happen. It’s only a ten-minute boat ride from here. Too bad it’s foggy right now. On a sunny day Claw Island is a very pretty sight.”

“But not today,” Violet said. “There’s no sign of the island, just dark shapes and fog everywhere.”

Grandfather Alden brought the car to a stop in a small parking area. “Here’s the ferry landing, just where it used to be. I see a few other camp families have already arrived.”

The Aldens scrambled from the car. They needed to stretch their legs after their long trip. They followed the sound of the lapping ocean right down to a small beach and an empty dock.

The children looked out at the gray water. A few seagulls bobbed in the cove, ducking under now and then for a fish. Everything else was wrapped in fog and strangely silent.

The Aldens returned to the parking area. They looked shyly at the other families milling around in the mist. Some of the children already had on their Camp Seagull shirts. Most of the younger children stayed close to their families, just as Benny and Violet stayed next to Grandfather Alden. Everyone would be saying good-bye soon enough.

CHAPTER 2
Screams on the Beach

Henry and Jessie helped unload Grandfather’s car. They carried their trunks toward the dock, where other campers were lining up their luggage.

Jessie smiled at a sandy-haired girl with a ponytail and a Junior Counselor cap. “Hi,” she said.

The girl kept on counting the bags and trunks. She didn’t seem to hear Jessie.

Jessie greeted the girl again. “I’m Jessie Alden. That’s my brother Henry over there. He’s also a Junior Counselor. We can help you carry the baggage onto the dock if you’d like.”

The girl picked up a heavy duffel bag. “You have to have special counselor training first before you can do certain things. Leave your camp trunks on the beach. I’ll put them on the ferry.” With that, the girl turned back to her work.

Jessie returned to the other Aldens. “I must have said the wrong thing to that Junior Counselor. I’ll wait to ask her what to do when she’s not so busy.”

Several children screamed. Even the grown-ups jumped at the earsplitting sound. Everyone looked around. There was nothing to be seen through the fog.

“Ha! You lose points already,” someone nearby said, then cackled. “No screaming at the horn.”

Benny stood by Jessie. “Who said that? What are they talking about? It’s so foggy, I can’t tell what’s going on.”

Jessie gave Benny a friendly squeeze. “I think they’re talking about the No Screaming Medal. It’s part of the Camp Seagull Olympics. Campers try to win points for being brave, or neat, or helpful — or quiet.”

Henry explained, “The No Screaming Medal goes to the group that has the fewest screamers. There are all kinds of other awards, too. There’s a No Food on the Floor Award for the group that drops the least food in the dining hall.”

“They give awards for things like that?” Benny asked. “That’s easy. I just hope they don’t have a No Talking Medal.”

Everyone jumped. But no one screamed this time.

Where was that terrible sound coming from? The Aldens stared out at the water. A boat, more like a large raft with a railing and a bench all around, chugged toward the shore. At the wheel, an unsmiling man in a pilot’s cap looked over the side of the boat to line it up with the dock.

Onboard sat two children, both with curly dark hair. The boy looked about

Jessie’s age. The girl seemed to be a few years younger, about nine years old. Both children stared back at the campers on the beach without smiling.

One of the nearby campers whispered to the Aldens, “The boatman is named Booth Pines. But all the campers call him Boo. He shows up in different places to fix things, and you don’t know he’s there.”

The Aldens looked at one another. Camp Seagull seemed a little spookier than they had expected from the camp photographs they had seen.

Benny tapped Grandfather’s arm. “Is that the people ferry?”

Mr. Alden smiled. “You can call it that. It’s such a short distance to Claw Island, you could almost float over there on a log.”

Everyone jumped back when Mr. Pines threw out a heavy rope. Henry grabbed the rope to tie it to the dock.

“Leave that!” the man yelled. 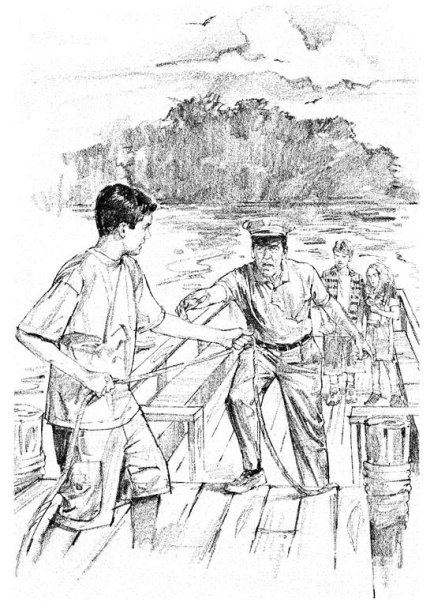 Mr. Pines turned off the ferry engine then stepped down. “You can help by standing back. Can’t have a bunch of strange kids bringing in the boat. There could be some big problems if the ferry floated away.”