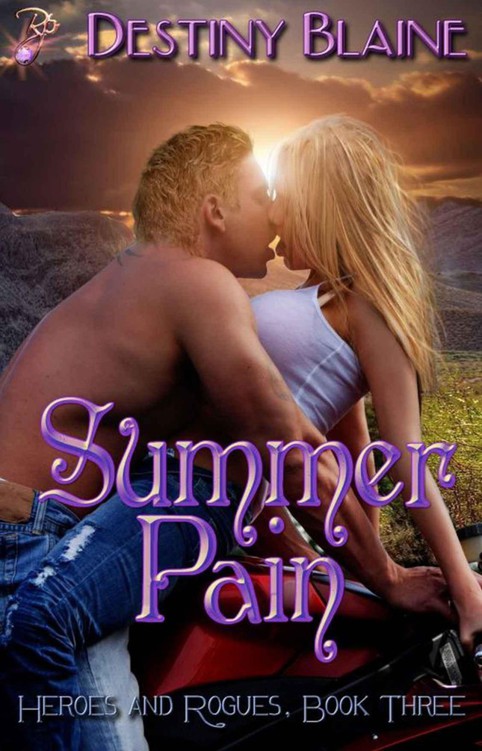 Warning: All rights reserved. The unauthorized reproduction or distribution of this copyrighted work is illegal. Criminal copyright infringement, including infringement without monetary gain, is investigated by the FBI and is punishable by up to 5 years in federal prison and a fine of $250,000.

For the owners, employees, and patrons of The Big Orange

She walked in the Heroes and Rogues motorcycle clubhouse like she’d been there a dozen times before. Standing about five-foot-three, if that, she wore her confidence and attitude about as tightly bound as that mess of golden blonde hair piled high behind her head.

Tigger couldn’t imagine why she was there, but he saw a major life disturbance brewing from a mile away. Apparently his sidekick, Cara, understood the kind of trouble she represented, too.

Cara, also known as Mama and commonly referred to as the club’s sheep—the woman who’d been slung around more times than a bale of hay—made a beeline for the front door. By the time she reached the middle of the room, she was face-to-face with the beautiful stranger responsible for turning Tigger’s head for a second time.

“You gotta be lost,” Cara said, slapping a dish towel over her right shoulder and tapping her left foot.

The gal looked Cara up and down before stretching her neck in an effort to meet Tigger’s gaze. A crooked smile claimed her lips and she returned her focus to Cara once more. “No, lady, I think I’m right where I’m supposed to be.”

Tigger rushed over then, catching Cara by the arm right as she balled her small fists tightly together. “Here now, woman. Go fix us a drink.”

Cara snorted. “Why do I feel like this is déjà vu?”

Tigger scratched his head. He recalled the moment when Sassy Road had marched her cute little ass inside the clubhouse and decided to take up residency in Logan Marc’s bed, a fact that sent Cara spinning at the time even though she and Sassy eventually became friends.

“What can I
do you
for?” Tigger asked, appreciating the twinkle in the newcomer’s big brown eyes when he made the deliberate slip. Since he took her for the kind of gal who could stand the scrutiny, he allowed himself a quite enjoyable visual tour.

The girl wasn’t modest. That was for damned sure.

Wearing a low-cut, white silk blouse and a sharp business suit designed to hug every curve, the woman gave off an immediate impression. She didn’t belong in their neck of the woods and perhaps had wandered too far from home. In fact, she probably had no idea how far off the tracks she’d tread.

“I’m looking for someone,” the woman said.

“That alone ought to tell you something, Tigger,” Cara called out from behind him.

Tigger tensed. Damn. Sometimes, well not often, but sometimes, he wished Cara would let him have a moment alone. In situations like these, he would’ve enjoyed flirtations. Besides, he needed to test the waters, just to be sure his upcoming proposal to Cara was one he could eventually honor and live by. No other woman had strolled into the clubhouse and immediately gained his nod of approval. He wanted to know if there was more to it than loose interest and a wandering eye.

Releasing a burdened sigh, Tigger glanced over his shoulder. “Not another word, Cara.”

A door slammed behind him. Cara had left the building, or at least the open barroom.

The newcomer snickered. “Is she always this testy?”

“Pretty much,” he replied, his gaze settling on the fullness of perky, young breasts pushed way too high for a casual show. Oh no, this gal wanted everyone to stare.

If he questioned that thought, it was only for a tick. The lady took off her jacket and draped it over her arm, straightening her shoulders in the process.

“No wonder your old lady isn’t exactly the picture perfect hostess for the local Welcome Wagon. I bet she has a hard time keeping you in line.”

“She manages,” Tigger grumbled, though he couldn’t find enough enthusiasm to sound convincing.

She moistened her lips and extended her small hand. “I’m Summer Pain.”

“Tigger,” he said, taken aback when she gripped him with a firm handshake. “Just Tigger.”

“It’s nice to make your acquaintance, ‘just’ Tigger.” She batted her eyelashes and looked at the long bar behind them, smiling as if she knew they were under surveillance.

“So who is it you’re looking for?” Tigger asked.

“Damsel?” He grunted. “Darlin’, you got the wrong clubhouse.”

“Really?” she drawled, fiddling with the zipper on her handbag. Retrieving an oblong white envelope from her purse’s contents, she studied the scribbled handwriting on the exterior. “I could’ve sworn I had the right place--5555 Beech Creek Road?”

“Damsel was with the Devil’s Angels. They’re located about three miles back down the road.”

“Was?” She thrust her arm forward and showed him her notes. “I was told I could find him here.”

“See?” She looked around. “I guess I’m in the right place after all.”

Tigger scrubbed the stubble on his jaw. “I don’t know where you got your information, but Damsel was the chapter president of the Devil’s Angels.”

“You keep saying, ‘was’ as if he kicked the bucket or cut out of town.”

“You ask a lot of questions for a lady who didn’t even know she was in the wrong place. And if you want an opinion on the matter, you’re asking for the wrong man. Why’s a gal who looks like you searching for a fella like Damsel Road?”

“You ask a lot of questions for a man who just met a woman.”

“You’re in the wrong place,” Tigger snapped, returning the envelope. “If you want to know anything about Damsel, you’ll need to take a left out of the parking lot and keep on driving until you see a large warehouse with a pitchfork at the end of the driveway. You’ll know you’re in hell when you knock on the door, and one of Satan’s servants greets you with a toothless smile.”

“Let me guess. You don’t host Friday night dinners and invite your neighbors to bring along their favorite covered dishes?”

Tigger’s gaze lingered at the dip of her blouse. “If you’re as smart as you look, lady, you’ll take that left and keep on trucking. Regardless of the reasons why you’re looking for Damsel, you’ve got no place at that clubhouse. Trust me.”

Summer slung her bag over her shoulder and winked. “My momma once told me to never take a man at his word when he says to trust him.”

Tigger shrugged. “It doesn’t make a damn difference to me whether they chew you up and spit you out or not. I gave you the warning to ease my conscience and nothing more. You don’t look like a gal who likes to bend over for a couple of strangers within a few minutes of a brief introduction.”

Summer moistened her lips. “I wouldn’t be so sure about that if I were you, Tigger. Didn’t anyone ever tell you not to judge a book by its cover?”

An hour later, Tigger was seated at the bar staring into the mirror behind the glass shelves. Cara hadn’t spoken to him since Summer left the club. In fact, she hadn’t stuck around to so much as start an argument.

He was beginning to think this relationship thing wasn’t quite what it was cracked up to be. Hell, a man had a right to look at a pretty woman. He hadn’t said or done anything inappropriate. He’d looked, sure, but he hadn’t touched.

He should’ve been promptly rewarded with a mind-altering blow but no. She’d chosen to run off and pout.

Aggravated, he grabbed his leather jacket from a nearby barstool. If Cara insisted on acting like a child, he’d leave her to her fit-throwing. He wasn’t about to stand by and play the part of a whipped man waiting on a woman. There were already enough of those around the club. Logan Marcs and Devon Kardashian were two fine examples. Sassy Road and Victory Rising kept their men on a short rope.

Thrusting his arms forward, he pushed the double doors out of his way and entered the kitchen. Victory and Sassy were seated at the picnic-style table snapping green beans.

“I’ll be damned. I was just thinking about the two of you.”

“Never mind,” Tigger grumbled. “Have either of you seen Cara?”

Sassy placed a large plastic bowl on the tabletop and glanced at Victory. Without uttering a word, she went to the sink and turned on the spigot.

Victory stood. An exasperated sigh fell from her lips. “Tigger, you’ve hurt her.”

“Come on, Tigger,” Victory said. “Sassy and I were back here watching the whole episode with that little blonde. You might as well have had drool on your chin.”

“The hell you say.” Tigger’s pulse raced as he looked around the large open space. “Where’s Cara? I need to tell her something.”

Sassy wheeled around to face him then.

“Got something on your mind, Miss Sass?”

Sassy frowned. “Tigger, you know how fragile Cara is. Right?”

“Fragile?” He balked at that. “Are we talking about the same person?”

Fragile’ s ass
. Cara was a hellcat. At the moment, she was probably trying to decide when and how she’d sharpen her claws.

“
Why don’t you just go out for a ride?” Victory suggested. “I’m sure everyone will feel better once you return.”

Victory glared at him dead-on.

His gaze hopped between the two women. They acted as if they were hiding something, and both of them looked as nervous as two whores facing a confessional booth.

Reading exactly everything into what they refused to say, he stormed across the room and hit the side door without so much as a break in stride. The clickety-click of high heels behind him alerted him to what he was about to find. By the time he entered the long hallways leading to the private quarters, he could hear evidence of what he’d soon see with his very own eyes.

Before he reached the door, Devon Kardashian, the club president, stepped in front of him with his palms forward. “Don’t, Tigger.”

“Get out of my way!” Tigger snarled and glanced down at Devon’s hands on his chest. Every muscle in Tigger’s body was taut like braided strands of hemp.

“You’ll have to wait and take it somewhere else, Tigger. It ain’t happening here, man,” Devon said, shaking his head. “You knew what she was when you let your heart get involved.”

“Fuck my heart. And move your ass.” For some reason, Tigger wanted confirmation. He had to see Cara’s infidelity with his own eyes. He’d heard the stories. He’d listened to the rumors. Now, he was seconds away from the proof, the evidence needed to change what he’d long since believed was their fate.