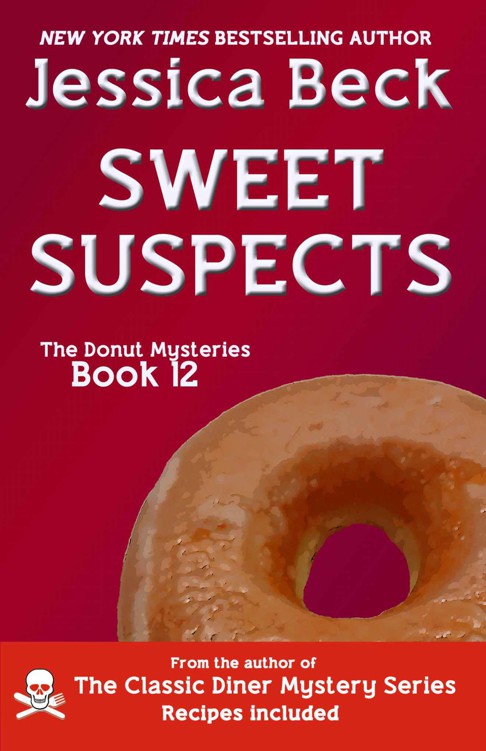 No part of this book may be reproduced, scanned, or distributed in any printed or electronic form without permission. Please do not participate in or encourage piracy of copyrighted materials in violation of the author’s rights. This is a work of fiction. Names, characters, places, and incidents either are the product of the author’s imagination or are used fictitiously, and any resemblance to actual persons, living or dead, business establishments, events, or locales is entirely coincidental.

Recipes included in this book are to be recreated at the reader’s own risk.

The author is not responsible for any damage, medical or otherwise, created as a result of reproducing these recipes.

It is the responsibility of the reader to ensure that none of the ingredients are detrimental to their health, and the author will not be held liable in any way for any problems that might arise from following the included recipes.

Other Books by Jessica Beck

“If one donut is good, then two must be even better!”

Sad to admit it, but this one’s from the author!

“Don’t I know you?” the drunken man wearing three different plastic leis asked as he cornered me in the high school gymnasium.

Though the place was decorated with crepe paper and streamers for our combined high school reunions, there was no hiding the normal utilitarian function of the space.

There wasn’t enough bunting in the world to disguise that.

Keeping with the Hawaiian luau theme, a pair of decorative spears held up a colorful banner over the DJ that said
Welcome Back, ASHS Students
.

Some genius had decided to host three class reunions at the same time, and I’d reluctantly agreed to go, even though my boyfriend, State Police Inspector Jake Bishop, was on the Outer Banks up to his hips in another murder.

Grace Gauge, my best friend since childhood, had convinced me that it would be fun, but so far, it had taken all that I had not to run out of the building as though it were on fire.

“Billy Briscoe, we were in most of the same classes all through high school.

“Sweet little Suzie Q,” he said, slurring a nickname that I would never answer to.

“You look great,” he added as he leaned in.

His clothes were so heavy with the smell of alcohol that I was amazed he could even still stand.

“You’re drunk,” I said, lacking any sympathy for the balding man with a middle-age spread that I had once considered cute.

Wow, what a difference a few years made.

“You wanna sneak away with me into the shadows for a minute or two?”

“Not even the least little bit,” I said as I spotted Grace walking toward us.

You know you wanna,” he said as he added an overstated wink.

“There you are, Billy.

Did you know that Sandy Link has been looking all over the gym for you?”

That got his attention.

Sandy had been the head cheerleader once upon a time, and she’d kept up her appearance to the point where it wouldn’t have surprised me if she’d shown up in her old uniform.

It clearly would still fit.

“Sandy?” he asked as he started scanning the room.

“The last time that I saw her, she was standing over by the men’s restroom,” Grace said.

Billy started off, abandoning me without a second thought, much to my pleasure.

“Grace, what would
Sandy
want with
him
?”

“She doesn’t, as far as I know, but you looked as though you’d had enough of Billy.”

“Wow, are you taking a chance.

Do you remember how bad a temper Billy has?

In the old days, he’d go crazy over a lot less.”

“I’m willing to bet that he won’t remember
any
of our conversation by morning,” Grace said.

Why
did we come here?” I asked as I glanced at the caged clock high on the wall.

“You said that this would be fun, remember?”

“It is,” Grace said with a good-natured smile.

“You just need to have the right frame of mind, Suzanne.”

“Well, I’m giving it five more minutes, and then I’m taking off.

I have to get up early tomorrow to make donuts, remember?”

“I’m not about to forget that,” she said as a handsome fellow interrupted us.

There was a definite gleam in his eyes as he studied her, and Grace returned every ounce of it.

“Tom Hancock, as I live and breathe.

“I saw you looking around the gym a minute ago, and if you tell me that you were trying to find me, you’ll make my day.”

Grace laughed, and I smiled as well.

She and Tom had been high school sweethearts, but they’d chosen different colleges.

They’d drifted apart over the years, but it was good seeing them together again.

“You are too charming for your own good,” Grace said, and then she turned to me.

“You remember Suzanne, don’t you?”

It’s great to see you again, Suzanne,” Tom said, turning those dazzling blue eyes on me.

He was even better looking than he had been in high school, and I found myself fighting back an unexpected giggle.

I reminded myself that I had a very significant other in my life as I tried to suppress my girlish laugh.

He looked around the crowded gym.

Are you two still together?”

It was my turn to laugh now.

“Not for a long time.

I divorced him quite awhile ago.”

“After our marriage broke up, I met someone
much
better than Max.”

“Is he here with you tonight?” Tom asked as he looked around yet again.

“More’s the pity,” Tom answered, and then he looked back at Grace.

“I’ve been afraid to ask you this, but I can’t stand the suspense one second longer.

Is there someone special in your life, Grace?”

“Wow, I’m really sorry to hear that,” Tom answered with a huge grin on his face.

“Try to contain yourself.

I can tell that you’re all broken up by the news,” she replied.

Just then, the DJ played a song from our school days, and Tom bowed deeply to Grace.

“May I have this dance?”

“You may,” Grace said before she turned to me.

You kids have fun,” I said.

“Thanks,” Grace replied, and Tom took her hand and led her out onto the dance floor.

They still looked good together, and it made me smile seeing Grace so happy.

Maybe Tom would stick around after the reunion.

My best friend
deserved
someone good in her life.

I saw Gary Thorpe standing to one side, a classmate who now owned a camera shop in town.

He was taking video of the entire affair, though for the life of me, I couldn’t imagine why anyone would care.

I was still watching Grace and Tom dance when an angry man nearly plowed into me where I stood on the sidelines.

He’d been a bully all through school, and from the way he was acting at the moment, it was pretty clear that he hadn’t changed all that much over the years.

The difference now was that I didn’t have to put up with him.

Nobody cares about what you think anymore.”

“I’m not going anywhere, and I’d like to see somebody try to throw me out.”

A mousy-looking woman approached us tentatively, and I was surprised to see that it was Janet Yeager.

She’d been so soft spoken through school that she’d barely made an impression on most folks.

Janet looked at the man in front of me and said, “Zane, I think that you’ve had enough to drink.”

He looked at her with raw anger.

“You don’t tell me what to do, Janet.

If you don’t like it, go back to the hotel.”

I couldn’t help myself as I blurted out, “You two are
together
?”

“For now,” Zane said as he scanned the dance floor.

I’m going to get even with that jerk if it’s the last thing I do.”

“Don’t do anything you’ll regret,” Janet pleaded, but Zane was already off.

“He’s usually not like this,” Janet said to me.

“I wish he wouldn’t drink so much.

He’s already had an argument with Mr. Davidson and Helen Marston, and now this.”

“I’m so sorry,” I said, for more reasons that I chose not to list, most of all that I was sorry that she’d decided to marry Zane in the first place.

To my dismay, Zane headed straight for Tom.

“There you are,” he said loudly.

“Did you think you could hide from me all night?”

“Yeah, that might be true, but you’re a liar and a cheat.

I want my money back,” Zane pressed.

“Everybody lost their shirts on that deal.

There’s no money left to give.”

“You mark my words,” Zane said as he stuck a meaty finger in Tom’s chest, stopping their dance.

“I’ll get it back one way or the other.”

Tom knocked the finger away, causing Zane to stumble a little.

He leaned toward Grace and whispered something in her ear, something that made her face go suddenly pale.

As she stumbled back away from him, Tom moved in.

“Leave her out of this, Zane.”

“Try and stop me,” Zane snapped.

He started to take a swing at Tom, but the man neatly sidestepped the punch and Zane went sprawling out onto the floor.

Janet raced to help him, but when she got there, he knocked her hand away.

He was one of Chief Martin’s best cops, and a friend of mine as well, not on duty but attending the reunion on his free time.

Officer Grant loved donuts, and he wasn’t afraid of being tagged with any of the jokes about cops and donuts.

He reached down and grabbed Zane’s arm in one swift motion.

Let’s get you some fresh air.”

“Get your hands off me,” Zane snapped as he tried to free himself, but the police officer was too strong for him.

“Outside right now,” Officer Grant said in a no-nonsense manner as he deftly walked Zane out of the gym without making too much of a scene.

I hurried over to Janet.

“I’m fine,” she said, clearly looking embarrassed by the entire confrontation that had just occurred.

“You might want to give him a little time to cool off first,” I said.

“Bye, Janet,” I said as she headed outside.

It wasn’t my job to stop her, but I still didn’t like the thought of her going outside while her husband was in such a mood.

It was still nearly impossible for me to believe, but then again, I was sure that a few folks had been surprised when I’d ended up with Max.

Drawing Conclusions by Donna Leon
The Sheikh's Son by Katheryn Lane
Heller's Revenge by JD Nixon
Mrs. Frisby and the Rats of NIMH by Robert O'Brien
Paloma: A Laurent & Dove Mystery by Linda A. Lavid
Be My Prince by Julianne MacLean
The Promise: An Elvis Cole and Joe Pike Novel by Robert Crais
Challenge of the clans by Flint, Kenneth C
A Poison Tree (Time, Blood and Karma Book 3) by John Dolan
The Queen's Blade Prequel II - God Touched by T C Southwell