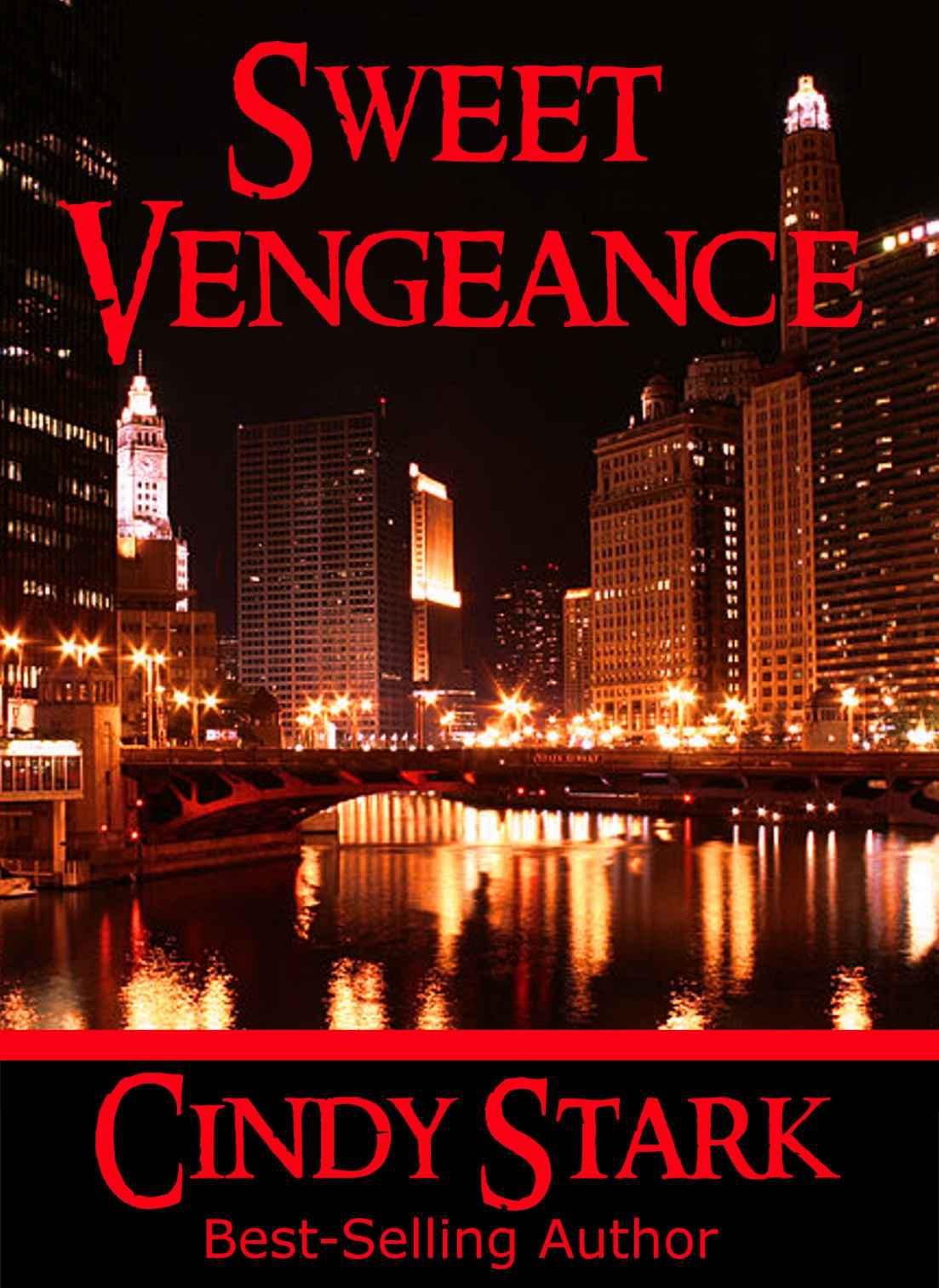 Allie Jordan is in love and believes her future is bright. She's finally going to have the family she longs for. But her dreams fade to black when her mobster-wanna-be boyfriend is executed at her feet. She's spared the same fate by a muscle-bound vigilante who tosses her over his shoulder and turns her life upside down, in more ways than one.

Jase Tyler has one goal in life--to exact revenge on the Chicago mobsters who slaughtered his family. But when he rescues Allie, things begin to change. The last thing he wants is to be responsible for a woman who reminds him he has a soul, but there's a price on her head, and he refuses to let the mob have her.

Love and danger are now a packaged deal, and they can't have one without the other. The true test will come when she discovers what he's been keeping from her.

Cindy lives with her family and an adorable Border Collie in a small town shadowed by the Rocky Mountains.

This
ebook is licensed for your personal enjoyment only.  This ebook may not be
re-sold or given away to other people.  If you would like to share this book
with another person, please purchase an additional copy for each recipient.  If
you're reading this book and did not purchase it, or it was not purchased for
your use only, then please return to Amazon.com and purchase your own copy.
The ebook contained herein constitutes a copyrighted work and may not be
reproduced, transmitted, downloaded, or stored in or introduced into an
information storage and retrieval system in any form or by any means, whether
electronic or mechanical, now known or hereinafter invented, without the
express written permission of the copyright owner, except in the case of brief
quotation embodied in critical articles and reviews.  Thank you for respecting
the hard work of this author.

This
ebook is a work of fiction.  The names, characters, places, and incidents are
products of the writer's imagination or have been used fictitiously and are not
to be construed as real.  Any resemblance to persons, living or dead, actual
events, locales or organizations is entirely coincidental.

Allie Jordan is in love and believes her future is bright.
She’s finally going to have the family she longs for.  But her dreams fade to
black when her mobster-wanna-be boyfriend is executed at her feet.  She’s
spared the same fate by a muscle-bound vigilante who tosses her over his
shoulder and turns her life upside down, in more ways than one.

Jase Tyler has one goal in life—to exact revenge on the Chicago
mobsters who slaughtered his family.  But when he rescues Allie, things begin
to change.  The last thing he wants is to be responsible for a woman who
reminds him he has a soul, but there’s a price on her head, and he refuses to
let the mob have her.

Secrets, betrayals and blood threaten their future happiness.
Allie unknowingly holds the key to his revenge.  What Jase is hiding could
unite them, or forever tear them apart.  If they want a chance at love, Allie
and Jase will have to work together to fight the mob and to overcome the past.

To Sierra and
Lexie who have always encouraged me and believed in me.

To Tiffinie
Helmer and Kerri LeRoy for their support, love, and countless hours.

She
was nineteen and pregnant.

Could
things get any better?  Allie Jordan didn't think so.  Excitement bubbled in
her like the fizzy Coke she held in her hand while she waited outside the local
bowling alley after finishing her shift.  She watched for her boyfriend's face
among the few stragglers who walked Chicago's darkened west-side streets.

Sure,
her friends thought she was crazy for wanting a baby and a family right out of
high school, but they didn't know lonely like she did.  They had families who
waited for them to come home.  Allie was lucky her aunt still let her crash on
the rotted couch in the basement.  She desperately wanted someone she could
love forever.  Now, she'd found him.

Half
the marquee lights above her were burned out, leaving a soft, protective glow
around her.  The summer temperatures had come early in May, giving warmth to
the evening and coaxing the hoodlums out of their hangouts.  Being out alone in
that part of town was not for outsiders, but this was her small section of the
city.  She knew how to avoid the dangers.  Besides, nobody messed with Joey
Pagano's girlfriend.

She
took a sip of Coke and rocked on her heels in anticipation.  Once she told Joey
about the baby, she knew he'd want to get married.  Then she'd finally have the
family she longed for.  An odd kind of energy swirled around her, and Allie
knew this was a night she'd remember forever.

Her
heart rate jumped when Joey came in to view as he hurried toward her, his dark
hair and jacket making him seem part of the night.  "You're late
again."  Allie wrapped her arms around his neck, pressing her body against
his.  His breaths were quick and deep from exertion, but he was there, and
everything was perfect.  The world lay at her feet, and she couldn't wait to
grab it and run.  "Someday—"

The
fear in his voice surprised her.  Her happy mood dropped like a block of cement
in the nearby Chicago River.  When she looked closer, she realized he had a
black eye and his beautiful lip was cut, leaving a bit of dried blood on his
mouth.  His injuries struck a chord of fear that had long been dormant inside
her.  "What's wrong?"

She'd
never seen him with his dark eyes so full of anxiety.  "We've got to get
out of here," he said.  "I'll take you home.  You need to stay inside
your aunt's house as much as possible.  I don't think anybody will mess with
you there."  He pulled her along the street into a deserted alley, tugging
her harder and harder until they were nearly running.

"What
do you mean, nobody will mess with me?"  The sound of their feet smacking
the pavement echoed around them, leaving the other noises behind.  "Is
somebody messing with you?  Is it Benny?"  Anything that was bad, wrong or
dangerous in Joey's life was because of Benny Trasatti.

He
slowed as the eerie darkness enveloped them, allowing her to catch her breath.
A cat dashed behind one of the few parked cars on the deserted street.

"You're
not talking to me.  Why won't you tell me what's happened?"  Couldn't he
see she was freaking out?

They
reached the end of the alley, and she wanted answers.  She dug in her heels and
forced him to a stop in front of Newman's Jewelry store, the place she'd
intended to tell him about the baby.  She'd dreamed about it all day.  On their
way home, she'd tell him her news.  He'd propose.  They'd look at rings, and
her future would be set.

"Joey,
please.  I love you.  Tell me what's wrong.  Who hit you?  Are you in
danger?"  She gestured with her hands, her fingers spread wide in
frustration.  "Please, I can't stand this."

Joey
glanced in both directions before pulling her into his warm embrace.
"It's fine.  Just a little misunderstanding with the boys."

The
boys.  The term he'd given to Benny and his delinquent friends.  The same boys
who had deep family connections to the mob.  Benny, himself, was the grandson
of a notorious mob boss.  And this was supposed to reassure her?  "You
know those
boys
are trouble.  I wish you'd stay away from them."

He
pressed his warm, firm lips to hers.  "It's no big deal.  As soon as I
give 'em what they want, they'll be happy."

His
words sobered her.  "What do they want?"  She recognized the threat
to her future happiness.  Benny dealt in drugs and guns, so it was pretty
obvious he wasn't asking for Joey's lunch money.

"Nothing
you need to worry about."  He tried to kiss her again, but she refused to
be distracted.

"You
need to stay away from them, Joey.  You're going to get hurt."

"Don't
go losing sleep over this.  Nobody's going to get hurt."  He seemed to
relax a little.  "I've got everything under control."  He touched the
top of her breast where a fresh tattoo lay hidden beneath her bra.
"Remember this."  He put his palm over his own chest where he had an
almost identical tattoo.   "This means we love each other, and we'll
always be together."

She
let him pull her close this time, needing to feel the strength and security he
offered.  Maybe she should tell him about the baby now.  It wasn't exactly the
romantic declaration she'd dreamed of, but it might be enough to convince him
to leave the life of crime he seemed determined to claim.

Allie
snuggled next to his warm body as a passing car's headlights illuminated them
against the jewelry store.  Beyond Joey's shoulder lay the cutest gold band.
The ring she hoped he'd buy her once she told him about the baby.  "Joey,
I think we should move away from Chicago.  Let's pack up and go.  Forget about
what your boys want.  We could leave tonight.  My aunt's pissed at me,
anyway."

She
glanced up at his face, ignoring the stab of hurt she felt because he wasn't
focused on her.  She placed a hand on his cheek, trying to turn his face.
"You can go to school, and I can get a job anywhere."

Joey's
gaze followed the car before he returned his attention to her.  "Easier
said than done, Allie.  You know things aren't that simple.  Besides, if this
works out the way I want it to, I won't have to worry about an education.
We'll be set for life."

Allie's
defenses went on high alert.  It scared her to think about what he might be
involved in.  If it would take care of them for life, it had to be big, which
also meant dangerous.  "But—"

He
sighed and looped his arm around her neck, pulling her head close to his.
"I've told you before, Al.  I'm not the college type."  He kissed
her, sending shivers to her core.  "You don't need to worry about this
thing with Benny's family.  It's all good.  I can handle myself."

Joey,
handling a mob boss?  A small breeze rustled down the sidewalk, sending her
long hair skittering across her cheek.  Now was her chance.  It was time to
tilt the world on its axis and make it spin in her direction.  "Joey."
She pulled back so she could catch his expression.  "I have something
wonderful to tell you.  I—"

"Shit."
Joey shoved her against the jewelry store, the rough brick scraping her jacket
as he turned away.

"Hey."
His actions caught her off guard, and it took her a moment to realize he'd
positioned himself between her and another set of oncoming headlights.
"Joey?" she whispered, her voice stumbling over the syllables as she
watched him pull a gun from the back of his waistband.  Oh God.
No
.

"Get
down."  The force of his words was meant to set her in motion, but she
froze as someone in an old green sedan lowered its passenger window and two
shots exploded.

Across the Great River by Irene Beltrán Hernández
Ditched by Robin Mellom
My Biggest Lie by Luke Brown
The Birth of Bane by Richard Heredia
Accuse the Toff by John Creasey
What the Light Hides by Mette Jakobsen
Overrun: Project Hideaway by Rusch, Michael
The Boy Who Ate Dog Biscuits by Betsy Sachs
Eureka - The Unfinished Revolution by Peter Fitzsimons
Letters From Al by Pieper, Kathleen