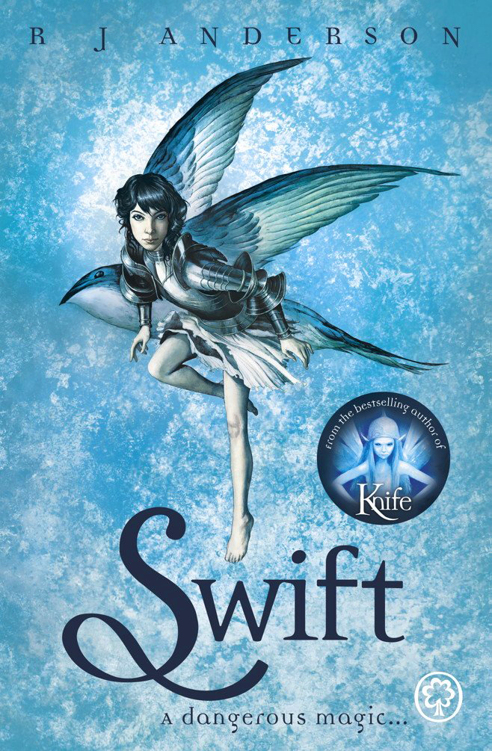 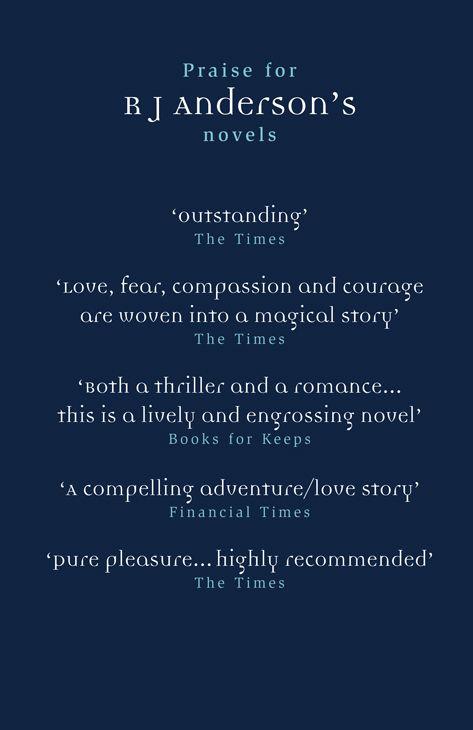 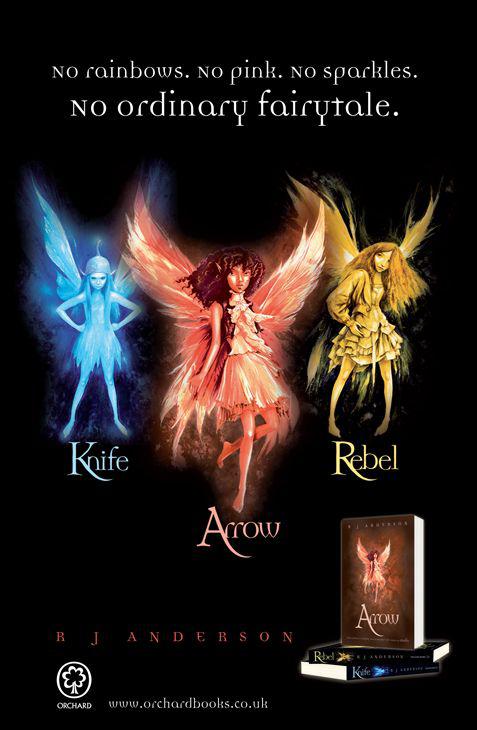 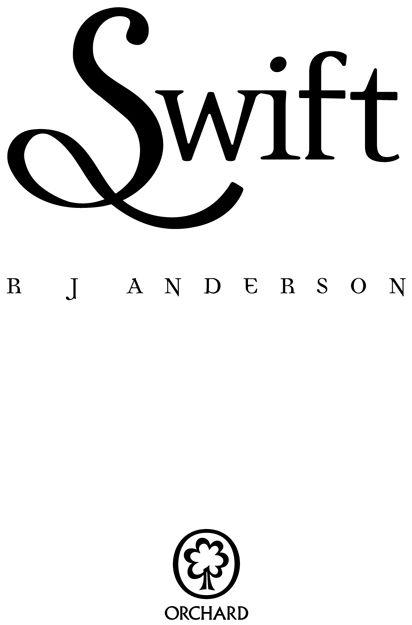 First published in the UK in 2012 by Orchard Books

This ebook edition published in 2012

The right of R J Anderson to be identified as the author of this work has been asserted by her in accordance with the Copyright, Designs and Patents Act, 1988.

Orchard Books is a division of Hachette Children’s Books,
an Hachette UK company.

In memory of my grandmother,
Ivy-Mae Menadue Michell,
whose legacy of love and saffron cake
still endures

‘You could always make it
look
as though you had wings,’ said Jenny, her voice echoing off the granite walls of the treasure cavern. ‘A little glamour, just for tonight—’

Ivy let the delicate wing-chain slide through her fingers, spilling it back into the chest. ‘I’m not that good with illusions. Cicely can cast better glamours than me, and she’s five years old.’ She shut the lid with a snap. ‘Anyway, why bother? I’m not going to fool anyone.’

Jenny looked pained, but did not argue. Already she was growing into a beauty, with the sturdy bones and warm complexion that all piskeys admired. Her wings were no less striking, all grey-white ripples above and a blush of pink beneath. She didn’t need jewellery to make herself look fine.

Ivy, on the other hand, had inherited her mother’s pale skin and small, spindly frame. No matter what she wore, Jenny would always outshine her. But Ivy didn’t care about that. She wouldn’t mind if she were ugly as a spriggan, if only she’d been born with wings like Jenny’s.

Or indeed, any wings at all.

Suppressing her envy, Ivy blew the dust off another chest and heaved up the lid. ‘What are these? Pipes?’ But no, they were too shiny for that. Unusually large armbands, perhaps.

‘That’s armour,’ said Jenny in hushed tones. ‘It must be a hundred years old.’

Ivy had heard of the ancient battles between the piskeys and their enemies, but she’d never seen armour before. Daring, she slid her arm into one of the guards and held it up to the light. But of course it looked silly on her; it had been meant for a warrior, not a skinny girl-child. She dropped it back into the chest.

‘Girls, it’s almost time.’ The soft voice came from Marigold, Ivy’s mother. There were shadows beneath her eyes, and the wan glow of her skin barely lit the archway in which she stood. She’d been working too hard again, no doubt, helping the other women prepare for the feast to come. ‘You’ll have to hurry.’

‘I’m done,’ said Jenny, touching the topaz pendant at her throat. ‘I was just helping Ivy a bit.’ She nudged the younger girl affectionately. ‘I’ll see you later.’

Marigold stepped aside to let Jenny pass, then moved to Ivy. ‘What’s the matter?’ she asked. ‘I thought you’d like to pick out something special to wear to your first Lighting. Do you want me to help?’

Her mother meant well, Ivy knew. But her tastes ran to the pink and glittery, and that wouldn’t suit Ivy at all. ‘No, it’s all right,’ she said. ‘I’ll find something next time.’

‘Not really,’ said Ivy, truthfully. She had made Jenny tell her everything she could remember about her first two Lightings, so she would know what to expect and no one could trick or scare her. It was her only defence against her brother Mica and the other piskey-boys, who would be trying all night to catch her in their pranks.

‘Not afraid of anything?’ asked her mother. ‘Not even the—’ Her voice caught. ‘The spriggans?’

No wonder people said Ivy’s mother was flighty. She was always worrying these days, even when there was nothing to fear. ‘They won’t come,’ said Ivy. ‘Not with Aunt Betony there to protect us.’ Betony, her father’s sister, had recently been crowned as the new Joan the Wad – the most powerful, important piskey in the Delve. It was her task to surround the Lighting with the same wards and glamours she used to protect the mine from intruders, and Betony never did anything carelessly.

Ivy picked up the trailing end of Marigold’s flowered shawl and draped it back over her shoulder. ‘We can go now,’ she said. ‘I’m ready.’

As Ivy followed her mother through the tunnels towards the surface, she was glad for the lights of her fellow piskeys heading in the same direction. Not that she was afraid of losing her way even in the dark, for Ivy knew most of the Delve’s twists and turnings by now. But the tunnels were magnificent, and it would have been a shame not to see them.

Every passage carved by the piskey miners – or knockers – was unique, from the polished granite of Long Way where Ivy’s family lived, to the delicate mosaics of plants and animals on the walls of Upper Rise, where she and the other children sat for lessons. But Ivy’s favourite tunnel was the one they were walking through now, lined with tiles of deep blue china clay. Her father had told her once that it was the colour of the sky, and when no one was watching her, Ivy would run through it with her arms outstretched and pretend that she was flying.

Which was what Jenny and the other girls would soon be doing – spreading their wings and launching themselves up the crude but useful shaft that the humans had dug out long ago, before the mine was abandoned and the piskeys moved in. The Great Shaft was the quickest route out of the mine, and if it weren’t for Ivy, Marigold would surely have flown to the Lighting that way herself. But now the two of them could only plod through the tunnels to the surface, like the men.

Humiliation curdled in Ivy’s stomach. What crime had she or her parents committed, that she’d been born wingless? Her magic might not be as strong as some piskeys’, but it was good enough: she could make herself tall as a human or tiny as a mole, even turn herself invisible if she didn’t mind a bit of a headache afterwards. But something had gone wrong with Ivy’s making while she was still unborn, and she’d come out with nothing but a pair of bony nubs between her shoulders where her wings should be. And neither Yarrow’s healing potions nor the Joan’s most powerful spells, it seemed, could change that.

Though not long ago, Ivy’s mother had said something about her own wings not being right when she was young… or had that been a dream? Ivy had been struggling all day to remember, but every time she tried her head began to swim.

Perhaps she was just tired. After all, she’d been looking forward to the Lighting so much, she’d hardly slept last night.

‘We’re almost there,’ whispered Marigold, taking Ivy’s hand. After the twisting bends of the Narrows and a climb up the Hunter’s Stair, they had reached the Earthenbore, a tunnel of packed clay baked to hardness by the power of the Joan herself. Ivy had never been this close to the surface before, and her pulse quickened as she followed the other piskeys into the passage.

At the first junction they turned right and began to climb again, the tunnel narrowing and the floor rising steeply as they neared the exit. The air smelled earthy, sweet with heather and bracken and the scent of blossoming gorse – plants that until now Ivy had only ever seen cut and tied in bundles. What would it be like to walk among them, to see them living and growing all around her? It was hard to imagine, but in a moment she wouldn’t have to. She would know.

‘Look at her big eyes,’ snickered one of the younger piskey-boys, nudging his companion, and Ivy stiffened. Just like Keeve to tease her at a time like this. He’d be calling her
Creeping Ivy
next.

‘Ivy’s always got big eyes,’ said the taller boy, elbowing him back. ‘Shut your mouth.’ He glanced at Ivy and gave her a shy half-smile before ducking out the archway into the night.

And that was just like Mattock, always looking out for the younger ones. She thought of her little sister Cicely, tucked into her bed with a sleeping-spell that would keep her there until morning. Last year Ivy had been just as oblivious to the celebrations taking place above her head, but it was her time now. She would not cling to her mother, like a baby; she would step out boldly, as the others were doing. Ivy pulled her hand free of Marigold’s, plunged forward…

And with a crackle of undergrowth and a last wild thump of her heart, Ivy was outside.

As she stepped out onto the surface of the world, the scrubby grass crunched beneath her feet, and a dry rustling filled her ears as the breeze – the first she had ever felt – stirred the gorse and bracken that surrounded the tunnel entrance. Underground the air was still, but here it danced around her, teasing and tugging her from every side. She turned a slow circle, trying to accustom herself to the strangeness of it, as her hair tangled about her face and her skirts swirled against her knees. Then she looked up – and her mouth dropped open in awe.

Jenny had tried to describe the sky to her, and she’d heard the droll-teller mention it in his stories. But what words could capture the grandeur of a roof that stretched out forever, too high for even the mightiest giant of legend to touch? It should have terrified Ivy to stand beneath that vast purple darkness, with the innumerable stars burning white-hot above her and the moon like a crucible of molten silver. But it only made her feel quiet and very, very small.