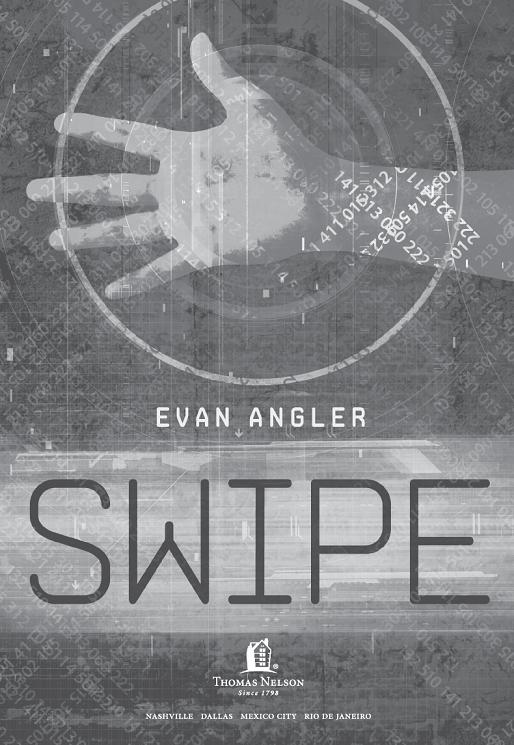 Tommy Nelson
Â®
titles may be purchased in bulk for educational, business, fundraising, or sales promotional use. For information, please e-mail [email protected]

Angler, Evan.
Â Â Swipe / by Evan Angler.
Â Â Â Â p. cm.
Â Â Summary: In a world where everyone must be Marked in order to gain citizenship and participate in society, a group of youngsters who questions the system struggles to identify the true enemyâwhile pursuing a group of Markless teenagers.

For my family,
who makes it possible

PROLOGUE
THE FRIENDS IN THE DUST

SEVEN
DUST ON THE LAM

ELEVEN
THE MEETING OF THE MINDS

PROLOGUE
THE FRIENDS
IN THE DUST

T
HE MOON WAS THE COLOR OF BLOOD, AND THE
clouds moving past were pale like bone. Blake sat atop the slide in the starlit playground and noticed this, waiting.

Two of his friends ran and yelled below him, chasing one another around the wooden castle, jumping and doing flips off the swing set until one fell on his face and cried, “New game!” while his nose streamed moon-hued rivulets and the other said, “I've won, I've won, I've won.” Farther off, a girl and boy sat on the ends of a teeter-totter, balanced, motionless, suspended, and ready.

It was fast approaching midnight, but not one of these teenagers worried about curfew or bedtime or accountability. Not one of them thought of families calling them home or of parents grounding them for bad behavior. They were alone. And the Dust played by its own rules.

In his way, Blake looked forward to these playground nights, grim as they inevitably became. This one had been a long time coming, and the flustered butterflies of anticipation taunted and amused him.

He squinted to see. At the edge of the park, a small girl had appeared, groggy and in pajamas, walking as if still in her own nightmare.

All at once, the five kids on the playground went still and silent. All five watched as the girl ambled through the grass and shadows, still holding a tattered half of their invitation in her hand.

Blake slid down the slide and balanced on the wooden lip at the edge of the cedar chips.

She nodded. Under her left eye was a green and brown bruise stretching from ear to nose, and it shone painfully in the twilight. But the rest of her was sturdy and thick, and coarse blond bangs framed a square face that was brave and defiant and anything but fragile.

The Dust encircled her slowly while Meg stood and stared them down one by one. But she trembled slightly, and it was too warm a night for that. Blake saw this and frowned.

“There's nothing to be afraid of,” he said.

But when Meg turned to run, the kids behind her proved Blake very wrong.

Her struggle was brief. But there was nothing gentle about the way the Dust blindfolded Meg, and tied her hands, and dragged her clumsily into the shadowed woods beneath the quiet cover of night.

T
HE LAST THING LOGAN WOULD WANT YOU TO
know about him was that he was afraid of the dark.

But Logan
was
afraid of the dark, and if you ever asked him about it, ever brought it up to his face and maybe teased him a little even, he'd stop you right where you stood and tell you it was for a very good reason.

It was because Logan Paul Langly was being watched.

He didn't know who, and he didn't know how. But every night, when Dad pulled up the covers, turned out the light, and shut the door behind him after demanding sweet dreams and tight sleep, Logan Paul Langly found himself on the wrong end of a spyglass.

So when Logan awoke with a startâeven in the comfort of his own bed, even in the warmth of the late-summer evening that was anything but dark and stormy, the weekend before his first day of eighth gradeâit was with well-worn urgency that he sat up, rubbed the sleep from his eyes, and scanned the room for signs of intrusion.

Tonight, there was only one. His window rested an inch above its seal, and a breeze dried the nightmare sweat from his forehead.

Logan couldn't remember if he'd left it open, but if you'd asked him in that moment, he would have told you he had not.

Had his father? Had his father walked to the window during their conversation that night? Maybe for some cool air in the midst of their heated discussion? Logan replayed the scene in his head.

He had been focused on his breathing, controlled and steady to keep himself calm. He had pulled the covers back but was standing a few feet away from the bed, just in case someone was under it, waiting for an ankle.

I'm too old for this
, he thought, and he shook his head with just a little bit of shame.

“Whatcha doin', bud?” Mr. Langly said in the doorway behind him, and Logan jumped as if the words were a spider falling down his back. “Imagination got hold again?”

Logan nodded but didn't turn around. Instead he crawled into bed and pulled the covers high up over himself, curling up and facing the wall. He could feel his father sit beside him, hunched over and looking at his hands, folded and resting on his lap.

Logan stiffened at the sound of the word. Finally he said, “We're all turning thirteen this year. Everyone's getting it. It's just a matter of time.”

Logan knew that if he was going to talk about this with anyone, it had to be Dad.

You did not talk about the Mark with Mom.

“Look,” Mr. Langly said. “This year . . . is going to be . . . it's going to be great.” But he frowned and sat still for several breaths, and Logan believed him less with each one.

“I remember when I got the Mark,” Mr. Langly said, finally. “Just after you were born, when the program began. They give you a spoonful of nanosleep, so it doesn't hurt. You just go in, answer some questions . . . sit back, and before you know it, you're Marked and on your way. It's nothing. Honestly.

“And then it's great! It's like playing your first hover-dodge game, or getting your first tablet, or going off to school, or . . . I mean, you're
free
! With the Mark, you're free. You can get a job, you can shop for things . . . if you want more juice, you can just go out and get a carton yourself. You won't even have to wait for Mom or me to come homeâ”

Logan rolled over and pulled the covers away from his head to look his father in the eyes. “
Juice
?”

“Or something.” His dad smiled. “Why? What would
you
get?”

Logan refused to think about it, refused to allow himself even the slightest excitement over the Mark, so he and his dad had a little unspoken staring contest instead. They did this from time to time, just reach a moment of disagreement when Logan would stare, and Mr. Langly was a good sport, so he'd always stare back.

That pretty much ended the staring contest that night.

So who had done it? Who had touched the window, and when? There had to be a reasonable explanation, but Logan couldn't think of one.

Why could he never think of one?

For years, it had been this way, off and on. He'd walk home from school on the familiar sidewalks of his town, looking over his shoulder the whole way. He'd finish homework on his lap with his back to a wall, his desk beside him empty and gathering dust, so as always to keep an eye on the room he was in. He'd brush his teeth at night transfixed by the door behind him in the mirror, his eyes trained on the knob that at any time could betray him, could turn or jump or jiggle. A quiet moment was one spent listening for footsteps, for leaves rustling in the fall or snow crunching in the winter. Time alone was time spent watching the movement in the shadows.

Being underage, Logan couldn't see a doctor without a Marked guardian, so at his moments of highest desperation, when his parents had had enough and didn't know what else to do, his dad would take himâdrag himâto the Center. Logan would sit in the examination room, prodded and scared, while Mr. Langly said to the doctor things like “We don't know what's wrong with him . . .” and “Ever since his sister . . .” just exactly as if Logan wasn't there, wasn't sitting
right there
and crying silently as the doctor shone lights at him and shook his head coolly and clicked his tongue, saying words like
traumatized
,
paranoid
,
delusional
.

Over time, Logan learned to carry his fear. He learned to swallow it, deny it, live with it. His accounts of faces in windows and footprints on floors, of sounds at night and doors opening and closing on their own, of being followed or tracked or who-knows-what-else, had all been brushed off so many times by his parents and teachers and adults of any kind that sometimes Logan wondered what was real and what was imaginary.