Read Take Me Down (Suits in Pursuit) Online

Take Me Down (Suits in Pursuit) 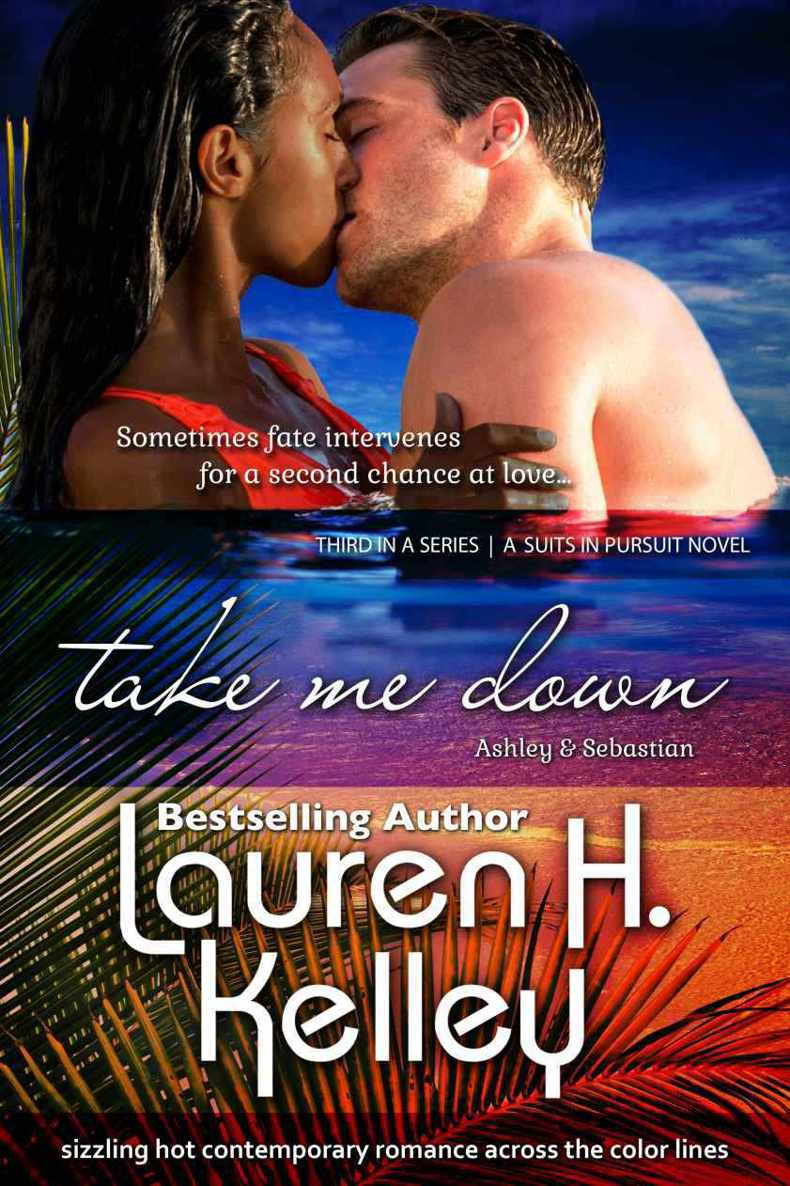 This is an original publication of LoveSpin Publishing, LLC.

All rights reserved. No part of this book may be reproduced, distributed, or transmitted in any form or by any means, including scanning, photocopying, recording, or other electronic or mechanical methods, without prior written consent of the Publisher, except in the case of brief quotations embodied in book reviews.

This is a work of fiction. Names, characters, places and incidents either are the product of the author’s imagination or are used fictitiously, and any resemblance to actual persons, living or dead, business establishments, events, or locales is entirely coincidental.

To my fabulous editor Yolanda Barber who challenged me every step of the way. To my husband, friends and extended family members who encouraged me to pursue my dream. Thank you all.

Third in A Series | A Suits in Pursuit Novel

“It’s not what you think, Ash. Hear me out, babe. She doesn’t mean anything to me. I screwed up.” Paul groveled on his rusty knees, kneeling near the bedside as Ashley shoved past him. “I was vulnerable. Weak. Babe, please don’t do this. I promise I won’t mess up again.”

Ashley whipped her head around and shot fiery daggers at Paul with her eyes. “The sad thing is that you don’t even care, and that’s a problem for me. I’m tired of your bull. I won’t do this with you anymore. We’re done. Get out!”

Paul crawled across the floor, his bare pasty ass crack covered with a crumpled sheet as he wrapped his lower half. The rail-thin skank, whom he’d been screwing senselessly when Ashley walked into the room, crouched naked in a corner, scrambling to dress. Arms and legs flailed wildly as the skinny redhead shoved her freckled face through the neck hole of a pink shirt and yanked a pale gray skirt up around absent hips. She grabbed her checkered Mary Jane pumps and tacky leopard-print bra and panties.

“You’d better move faster like you don’t want my foot up your ass,” Ashley snapped. “Can’t even look at me, can you?” Tucked away in his crate, Copper yipped and circled in time to the commotion.

Her head kept down. “I… I’m sorry. I… I’m leaving now,” the woman stammered. Her large round eyes darted wildly as though looking for the fastest escape route. A hand shielded her beet-red face from Ashley, and her pace quickened.

Ashley’s scathing glare trailed that sleazy hoochie’s hasty steps as she made a scandalous escape through the front door of the loft apartment.

Finally on his feet, Paul yanked up his underwear and stalked over to Ashley. Sweat-drenched biceps snaked around her waist and pulled her to him. Taking a deep breath, she squelched the nausea building in her belly.

“Ashley, you know this is your fault. If you didn’t hold out on me last week, I wouldn’t have…”

She jerked out of his grimy grip and spun around. With the full force of breath in her lungs, Ashley’s scream bounced off the twenty-foot ceiling. “Get your goddamn hands off me! How dare you blame me, you piece of shit! Get out! Now!” Trembling hands clenched into fists. “Get your shit and get the hell out.”

Paul stilled. He backed away. Kept quiet. A smirk smeared across his face. He meandered across the room in his boxers and leaned against the speckled granite kitchen countertop. “Ash, come on. I swear. I’ll never cheat on you again.”

A coy smile relaxed the tension in her lips. “Last time, huh?” Her stare idled on perfect bleach-white teeth that he dared to bare.

“I swear. This is the last time. You’re my beautiful mocha princess.”

Moving at a snail’s pace, she recovered his black slacks and dress shirt tossed carelessly to the floor near shiny new loafers. Shiny new loafers that his broke ass couldn’t have purchased.
Deadbeat!
He hadn’t held a steady job or paid a single bill in six months. She slinked past him and wiggled her voluptuous ass. With a slight turn and a flippant tilt of her head, she glanced over her shoulder. “You’re damn right, asshole.” She tossed his belongings through the large industrial window nine stories to the ground below. “I said get out, and that’s what I meant. Now!”

Suddenly Ashley lunged forward, her clawed hands aimed at Paul’s jugular. He stumbled, crashed into a leather stool, and landed on the cold concrete floor.

Paul clambered to his feet. Backing away from Ashley, he slammed into the gritty exposed brick wall. “You crazy bitch!”

“Crazy?” she said, her laugh deranged, mocking his words. “Oh, you haven’t seen me at crazy, but I’m about to show you crazy.” She stepped out of her right shoe. Then her left shoe. Bent over, Ashley retrieved a four-inch stiletto and then rose to her full five-foot-seven-inch height, heel aimed at Paul.

He slithered along the wall’s surface, trying to flee. “Agh!” he cried out when the brick grated his flesh.

Ashley charged again. Paul scurried to the front door. The sound of him fiddling with the doorknob assaulted her eardrums until finally the chambers in the lock clicked and he made a hasty escape.

Paul stood half-naked in the hall. The door slammed shut. Ashley laughed, thinking about him running through the interior of the building in his boxers. He hadn’t been wise to tempt her sanity.

Paul evicted from her apartment and her life, Ashley sank to the floor. Her knees pulled to a heaving chest, her head lowered into them. Her anger burned hot. She had forgotten to breathe. Stewing in her reality, Ashley sobbed hard and tears flowed in streams down her face like a waterfall.

Ashley and Paul had met at a bar. That first night of heated passion had been a deceptive lure. The explosive sex that started with midnight booty calls quickly fizzled into a year of pure hell. Paul came equipped with a heartbeat and a hard cock, barely a step up from dildo sex. They had nothing in common, he was rude, and frankly the man was dumber than the loafers that hit the pavement when she tossed them out the window. He just happened to have the right male apparatus to soothe the empty ache between her thighs on lonely nights. Ashley turned to men whenever the loneliness in her life was too overwhelming, echoed too loudly, and reminded her that fairy-tale endings didn’t always happen—though her best friend Kerrigan proved to be the exception.
Bitch.

After her pity party, Ashley reveled in a sense of relief. The thought of that bargain-basement hooker in her apartment having sex on her bed made Ashley’s stomach twist. She pulled herself up from the floor. With puffy eyes, she entered the bathroom to clean up, dabbed tears away from her swollen brown eyes.