Taken by the Wolf King (Gladiator) 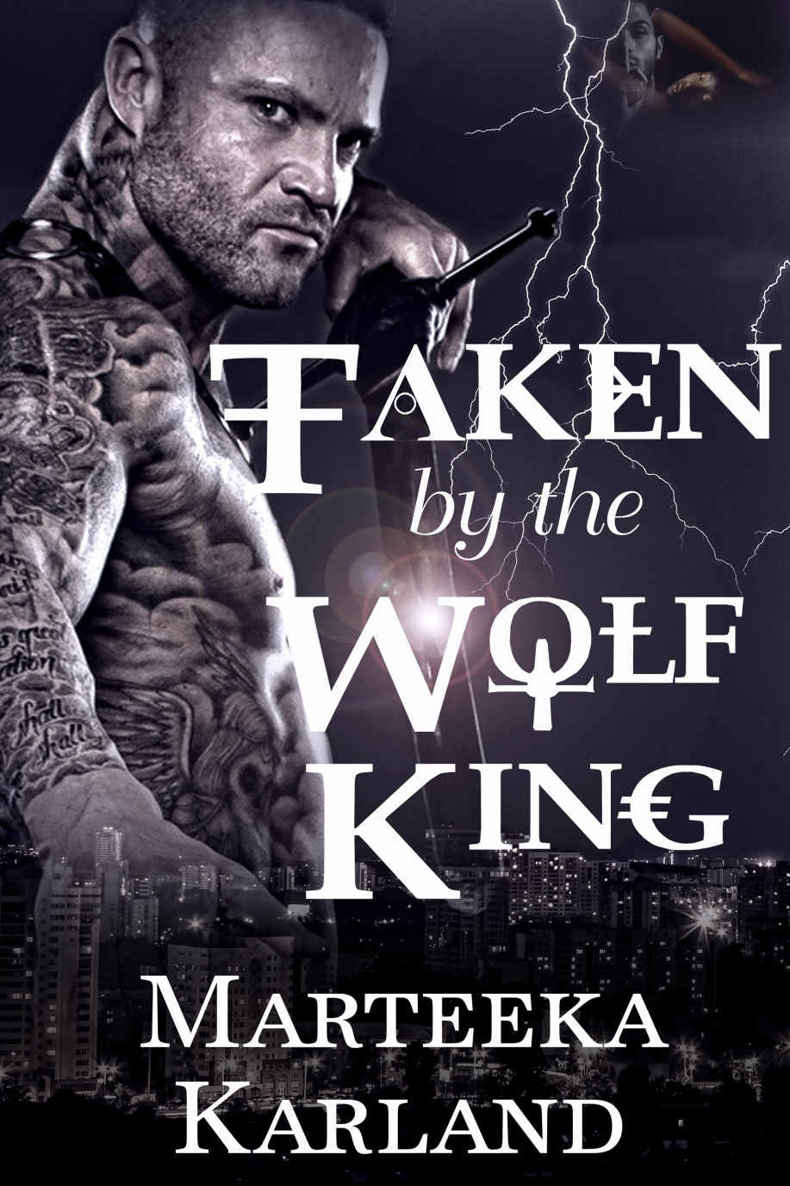 Taken by the Wolf King

A Wolf King she can never have…

Leif Wolfheart: Tempted by a dark-skinned beauty he can’t figure out, he struggles to put aside his own needs in order to save his people from continued slavery.

A mysterious woman whose beauty is matched only by her treachery…

Elsa Thorne: Caught between deadly politics and a man bent on claiming her, all she can afford to focus on is saving her children. At any cost.

Captured, tortured, and maddened by pain, Leif vows revenge on the woman he would have made his queen. But will his hatred of what she was forced to do build a wall between them that can never be torn down?

eBooks
are NOT transferable. Re-selling, sharing or giving eBooks is a copyright infringement.

A full moon rose over Denwulf like a sparkling globe through the foggy mist. Leif gazed at the sight in awe, as he always did. One globe was a ghostly silver. Golden light glittered from the larger moon as it slowly crept over the sky where it presented a half face. Wolf Cub and Mother Wolf, they were called by his people. The two moons that had shaped the culture of the wolfen clans long before he’d been born moved proudly in the night. Looking at the majestic sight now, Leif dreaded leaving his world the next day, but the trip to the
Earthen
plane was necessary if he were to free the rest of his people.

His world was lush and green, forest surrounding Denwulf like a protective barrier. From what he’d learned, the place he was going to, though rich in technology and fascinating advancements, was a war-torn country where the citizens had fled to the skies. The engineered structures now housed great cities and only the poorest—or the unluckiest—resided below. Any forests in that world were said to be home to monsters from legend. And renegades. Leif believed the latter more than the former.

As he thought about that, he recalled Brandwulfr, his best friend and Guardian of their people. The older wolf had been captured and used as a gladiator, made to fight to the death against anything they put him up against. For years Leif had feared his friend lost but had been prevented from investigating by a promise. Now that the situation was better known, Leif had a choice. But did he try to act diplomatically, or did he take his people into a bloody war?

“You don’t have to do this, you know.” Brandwulfr stood stiffly next to a nearby tree. “Let one of the elders do it. They’re chomping at the bit to rekindle the alliance our people once had with the human world. Let them take the risk.”

Leif scowled at his friend. “And skulk in the shadow of Denwulf like a coward? What kind of king would that make me?”

“One still able to lead his people when diplomacy fails.” Trust Brandwulfr to cut to the heart of the matter.

“You don’t believe there is even a small hope for peace, do you?”

“Not in the least. But if you feel like you have to try, then let someone else take the risk. If you prefer, I’ll go.”

“After all you suffered, there’s no way I’d send you on a diplomatic mission.” Leif chuckled, trying to lighten the mood.

Brandwulfr gave him a steady look. “I’d do it for you, brother.”

Of course he would. If there was one thing Leif could count on, it was Brandwulfr’s word. “That would be worse than a death sentence for you,” he said, knowing his friend could never interact peacefully with the humans, no matter that his wife was one. Though he’d told Leif on more than one occasion that not all humans believed the shifters were meant to be enslaved, Leif was sure he said that for his wife, Miranda’s, sake. She was actually one of the few who truly believed that, according to the Guardian. But Leif had to try. Not only for the sake of his own people, but for the sake of the humans as well. If Denwulf went to war with the humans, there was no doubt who would be slaughtered, and it wouldn’t be shifters.

“For you, and my Miranda, I can manage.”

“No,” Leif said without hesitation. “This isn’t your job. It’s mine. Not the elders’ or diplomats’. Mine.” He took a breath. “If there is a way to form a peace with those people, I’ll find a way.”

“At least let me go with you. The guard will protect you.” Brandwulfr clenched and unclenched his fists as if already itching to rip the throat from anyone who dared try to harm his best friend and king.

“The guard maybe. I’ll be taking Jorak and Astrid with me for sure. Jorak is my most loyal and trusted friend—next to you—and Astrid fancies herself a fitting mate for me. She’ll guard what she considers hers as ruthlessly as any wolf. But not you, brother. I need you here. If something goes wrong, you will lead our people.”

With a look of utter horror, the Guardian actually took a step backward, raising his hands in defense. “Oh, fuck no! Are you out of your godsdamned mind? Me?”

“The people will follow you, and any warriors who would try to make a bid for power would think twice about it.” Leif waited until Brandwulfr looked him in the eyes. “You’re the only one I trust to lead our people in my absence. You’re a just warrior, strong and proud. But you’re also honorable and have always had the best interest of our people at heart.”

“Except where my own mate was concerned,” Brandwulfr muttered. “She’s human. There are those who still don’t trust her.”

“But you’re both well on your way to convincing even the most staunch objections. Miranda is not only kind, but fiercely loyal to both you and me. And the gods help anyone who crosses one of the children in the city.” Leif chuckled as he said the last. “I almost pity you if that female gives you male children.”

“Tell me about it,” Brandwulfr groaned. “I’ll be held accountable for every single bump and bruise on the boy.”

They laughed in companionship for several moments before growing silent once more. This trip weighed heavily on Leif’s heart, though he had no idea why.

“I don’t like this,” Brandwulfr muttered. “But I can see you’re determined, so a word of advice. “Don’t trust
anyone
. Take the most loyal guards and keep at least two of them with you at all times.”

“Understood,” Leif said, though he knew it wouldn’t always be possible. He would try for his friend’s sake. The big wolf took his role as Guardian very seriously. Especially when his king was going into a potentially dangerous situation without him. “Hand-pick the guard yourself. Tell them to be ready to leave on the morrow.”

“Very well. Watch your back, brother.” The haunted look in Brandwulfr’s eyes made the hair stand up on the back of Leif’s neck.

“I have no intention of getting killed. Have no worries on that account.”

“I’m not worried about you being killed. You can take care of yourself in that matter. But if you’re captured”—Brandwulfr met his gaze intently—“you may come to pray for death before I can rescue you.”