Read Tales From the Tower of London Online

Tales From the Tower of London 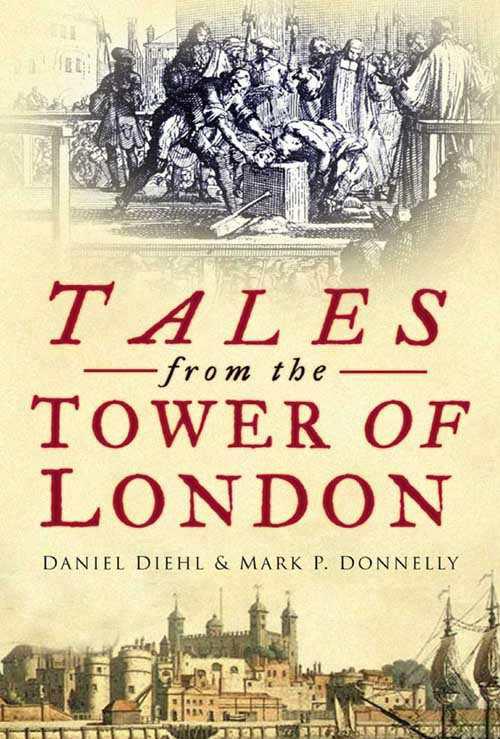 This edition first published in 2006

This ebook edition first published in 2012

The right of Daniel Diehl and Mark P. Donnelly, to be identified as the Author of this work has been asserted in accordance with the Copyrights, Designs and Patents Act 1988.

This ebook is copyright material and must not be copied, reproduced, transferred, distributed, leased, licensed or publicly performed or used in any way except as specifically permitted in writing by the publishers, as allowed under the terms and conditions under which it was purchased or as strictly permitted by applicable copyright law. Any unauthorised distribution or use of this text may be a direct infringement of the author’s and publisher’s rights, and those responsible may be liable in law accordingly.

Plans of the Tower of London, twelfth to twentieth century

1
The Axe, the Arrow and the Wailing Monk: William the Conqueror and Brother Gundulf

3
A Family Affair: The Princes in the Tower

4
The Warden, the Wolf and the Woman: John Wolfe and Alice Tankerville

11
The Bloody Assizes: The Duke of Monmouth and Judge Jeffreys

12
The King Over the Water: William and Winifred Maxwell Lord and Lady Nithsdale

There are only a handful of buildings in the world that are universally recognisable by both their name and location. The Eiffel Tower, the Colosseum, Britain’s Houses of Parliament (and their accompanying clock, Big Ben), China’s Great Wall, the White House (thanks primarily to television news), the pyramids and their neighbouring Sphinx, the Empire State Building, Notre Dame, the Taj Mahal and the Tower of London. Even the great temple complex at Ankor Wat and Moscow’s Kremlin are only partially recognisable; the first by its distinctive architecture, but not by location (Cambodia) and the second only by the presence of the magnificent cathedral of St Basil. Of all these wonderful monuments to architectural creativity the Tower of London is unquestionably the most drawn, painted and photographed. No occupied building in the world is, or has been, more often represented on paper.

Amazingly, as universally popular as medieval castles are with the public, of all the buildings listed above only the Tower of London is a castle and, with the exception of the White House, the only one ever used as a private residence. Having been in constant use since the 1080s, the Tower can also lay claim to being the oldest living community in Europe, if not the world. These factors alone qualify it as a site worth studying.

Building of the Tower of London was begun in 1078 by command of William the Conqueror, but its initial form was a far cry from that which we see today. The only original buildings still remaining are the White Tower, which dominates the complex, and a few sections of the old Roman city wall that remain embedded in the curtain wall and scattered around the inner yard. The rest of the original buildings, and their surrounding fortification, were constructed of wood and have long since disappeared.

Through most of its nine and a half centuries, the Tower was a place where the monarchs of England could house their private army, seek refuge in times of trouble and use as a base of operations. More than one of these periods of strife are dealt with in depth in this book. Curiously, the Tower was not originally intended to protect the city of London, but rather to protect the occupying Normans from what William the Conqueror called ‘the vast and furious population’ of England. The idea was to build a castle so massive and so terrifying that the indigenous Anglo-Saxons would think twice before challenging their Norman overlords. To that end, it worked magnificently.

In the centuries since the Normans first began construction of the Tower, it has undergone massive (and until the mid-nineteenth century) almost constant change. Old buildings and towers were routinely torn down and new ones erected in their place. Sometimes these changes were brought about by purely practical needs and other times to repair the destruction brought about by the occasional fire, siege, or bombing (both during the Second World War and during 1970s terrorist attacks). Existing buildings were also frequently converted from one use to another to suit changing social demands and political reality. As one monarch after another remodelled the complex to suit their individual needs, the names of some existing towers and buildings also changed. What is now known as the Bloody Tower was originally called the Garden Tower because of its proximity to the complex’s kitchen garden. We have tried to reflect these changes in the text of our stories.

The Tower has alternately, and often simultaneously, been used as a royal palace, a fortress, a zoo, a military garrison, the Royal Treasury, an arsenal, the Royal Mint, a state office building, a museum and the repository of the Crown Jewels. As late as the reign of Queen Elizabeth I, John Stow commented on the Tower’s multiple uses, stating that it was ‘a citadel to defend or command the city, a royal palace for assemblies or treaties, a prison of state for the most dangerous offenders; the only place of coinage for all England. . . . The armoury for warlike provision; the treasury of the ornaments and jewels of the crown; and general conserver of the records of the Queen’s courts of justice.’

The Tower complex’s architectural make-up as we see it today is, to a great extent, the result of Victorian ‘remodelling’, to make it more accessible to the public and appear more ‘appropriately medieval’. Since Queen Victoria first opened the Tower to tourists in 1837, the general public has come to think of it primarily as an awe-inspiring museum. While ‘wowing’ the tourists may only recently have become one of the Tower’s official functions, it has had that effect on visiting dignitaries since the Middle Ages. After all, as London’s most visible symbol of the monarchy it was the Tower’s job to impress, and impress it does.

The Tower of London is, quite literally, a town in a stone envelope tucked in the heart of London. Deep inside massive walls, the streets and alleys of the Tower complex twist, turn and double back on themselves like some bizarre stone maze. Nearly everything here, from the looming White Tower to the enclosure walls, road surfaces, walkways and smallest public toilet, are made of stone – the only relief is the occasional blank stare of a window or the narrow ribbon of sky appearing over the outer curtain walls.

Popular though they are, neither photograph nor drawing can impart the sheer mass of the place. Unless visitors constantly remind themselves that this is not some perfectly preserved medieval town, but a very real military base, the most thrilling aspect of the Tower experience will be lost amid the tourist-friendly splash.

As spectacular as the Tower is architecturally, chronicling its physical development is not the primary concern of this book. For nearly two centuries there have been dozens, if not hundreds, of books written about the tower’s physical history. Nearly all of them, from the simplest guidebook to the most lavish ‘coffee table’ volume, have attempted to give an overview of the old fortress’ development, changing uses, important prisoners and gory tortures that have all contributed to the rich tapestry of its history. Instead of reploughing this well-trodden field, we have limited ourselves to telling the stories of the lives, and too often the deaths, of a few of the individuals who have passed through the gates of the Tower over the centuries. Most of the people whose stories are told here are at least briefly mentioned in many of these earlier books, giving us tantalising glimpses into their lives, but seldom, if ever, telling their whole story as it relates to their time at the Tower. It is the stories of these individuals, stories of bravery, greed, lust, heroism and ambition that we endeavour to bring to light in this volume.

Some of the people you will meet in the following pages will be at least slightly familiar. Wat Tyler and the Peasants’ Revolt of 1381, the disappearance of the Princes in the Tower, Henry VIII’s ill-fated fifth wife, Katherine Howard, and others, will be familiar, but hopefully we will add to your understanding of them. Others such as the foolhardy Colonel Blood, the tragic Alice Tankerville and the Nazi spy Josef Jakobs may well take you into unfamiliar territory.

The vast catalogue of adventures and adversities that people have faced in connection with the Tower of London is almost endless and it would be impossible to recount all, or even most, of them in a single volume. Practical limitations have forced us to omit many worthwhile, and often familiar, incidents of Tower history. Anne Boleyn, Sir Walter Raleigh and Scots patriot William Wallace are only a few of the people whose stories might have been told here, but space forced us to leave them out. But take heart dear reader; hopefully we will cover them in a future book.

We have approached each chapter in
Tales from the Tower
as a complete work in itself, capable of being read on its own and in no particular order. If you prefer not to read them in the chronological order in which they are presented, by all means do so. There are instances, however, where this might cause you to miss some revealing insights. In the chapter on Katherine Howard, you will find a seemingly benign mention of Bishop Edmond Bonner who performed the marriage ceremony between Katherine and Henry VIII. In the following chapter you will meet Bonner again, but in a far less pleasant capacity. However you choose to approach this book, rest assured that each chapter has been provided with sufficient background material to give you a sound historical ‘feel’ for the story, its characters and its setting in time and place.

I'd Rather Be In Paris by Misty Evans
Accusation by Catherine Bush
Napoleon's Gift by Alie Infante
Prodigal Son by Dean Koontz
A Peach of a Murder by Livia J. Washburn
Standing in the Rainbow by Fannie Flagg
Dragons of War by Christopher Rowley
ARIANNA: An Original Screenplay by Desai, Mehul
If You're Not Yet Like Me by Edan Lepucki
Hotter than Helen (The "Bobby's Diner" Series) by Wingate, Susan