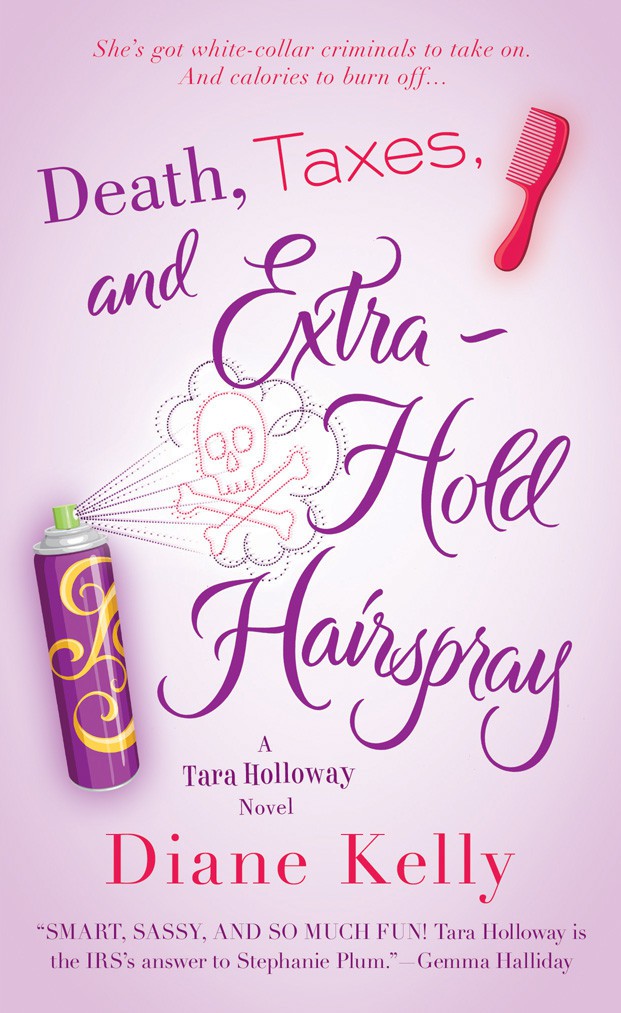 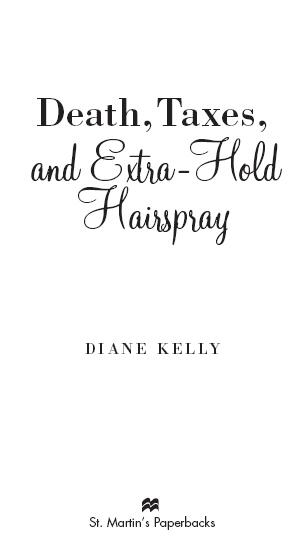 To my Aunt Betty, who lost her fight with lung cancer. I know the margaritas are good and the slots are always paying off where you are now.

I owe many thanks to my wonderful team at St. Martin’s Paperbacks. To my editor, Holly Blanck, who is so easy and pleasant to work with and whose insights and suggestions always make my work better. You rock! To Eileen Rothschild and Aleksandra Mencel for spreading the word about my books. To Danielle Fiorella and Monika Roe for creating such perfect covers for my books. And to everyone else who had a hand in bringing my books to readers, thanks for all you do!

Thanks to my agent, Helen Breitwieser, for your hard work, enthusiasm, and skillful guidance.

To Julia Hunter. Thanks for sharing your knowledge of firearms.

To my sister, Donna, for trying to teach me how to play craps. If not for the free drinks, I might have actually learned something.

To the clever and creative Liz Bemis and Sienna Condy of Bemis Promotions. I appreciate your hard work on my Web site and promotions.

To the IRS special agents who assisted in my research. I’m in awe of what you do. Thanks for sharing your intriguing world with me.

And, finally, thanks so much to my readers. Enjoy your time with Tara and the gang. I hope this book brings you lots of LOL moments!

“Damn.” I dropped the phone back into its cradle on my desk. I needed help on a case, but it seemed no one was available this afternoon. I’d called every special agent in the Dallas IRS Criminal Investigations office.

Make that every special agent
but one
.

That one
sat directly across the hall, his cowboy boots propped on his desk, his right hand rhythmically squeezing a blue stress ball as he eyed me. I sat at my desk, pretending not to notice.

Why didn’t I want Nick Pratt working on this case with me? Because the guy had whiskey-colored eyes that drank a girl in, an ass you could bounce a quarter off of, and more sex appeal than George Clooney, Brad Pitt, and Johnny Depp combined.

I realize these factors might all sound like reasons
to want
to work with him. Problem was, I was in a committed relationship with a wonderful guy and, despite that fact, wasn’t entirely sure I could resist temptation.

Better not put myself to the test, right?

My usual partner, Eddie Bardin, had received an unexpected temporary promotion to acting director three weeks ago when doctors found a spot on the right lung of our boss, Lu Lobozinski. Lu had taken time off for her chemotherapy treatments and recovery, appointing Eddie to take her place until she was able to return.

Eddie’s temporary promotion left me to handle a buttload of cases all on my own. And not just any old buttload, but cases that had been purposely put on the back burner for years because each case was guaranteed to be a major pain in the ass.

One of the biggest of these cases involved an eighty-three-year-old chicken rancher who’d served seven consecutive terms as president of a radical secessionist group. Another involved a popular, charismatic preacher who financed a lavish lifestyle via his congregants’ tax-deductible donations to his megachurch. It was almost enough to send me back to my boring old job at the CPA firm.

The phone on my desk rang. The caller ID readout displayed the name
N PRATT
.

Dang. No way I could ignore the guy now. It would be too obvious.

I looked across the hall as I picked up the phone. Nick looked back at me, one thick brown brow raised. How the guy could look so damn sexy in a plain white dress shirt and basic tan slacks was beyond me. Maybe it was the oversized gold horseshoe-shaped belt buckle that did it, drawing attention to his nether regions like a flashing neon sign that said
WANNA GET LUCKY?

You got me. I’m a bit of a smart-ass. But I had spent two summers in high school working for Big Bob. Minimum wage plus all the free nightcrawlers I wanted. Which was none.

Nick shot me a pointed look across the hall. “Why haven’t you asked me to help you?”

Because you make my girlie parts quiver in a very unprofessional manner.
But I couldn’t very well tell him that, now could I? Better think quick, Tara.

“You looked … um…”
Gorgeous? Sexy as hell? Absolutely boinkable?
I went with, “Busy.”

He grinned, flashing his chipped tooth, an imperfection that somehow only added to his primal appeal. “I fake it pretty good, don’t I? That’s how I got fast-tracked to senior special agent.”

Nick’s career as a special agent with the IRS had indeed been meteoric, at least until three years ago when he’d been forced to flee the country or die at the hands of Marcos Mendoza, a violent, money-laundering tax cheat.

Luckily for Nick, Lu had later assigned me and Eddie to renew the case against Mendoza. After the creep threatened Eddie and his family, I’d smuggled Nick back into the U.S. and the two of us had brought Mendoza to his knees. Literally. Hard for the man to stay standing after I’d shot off his left testicle. I’d considered taking the gonad to a taxidermist for mounting, but I doubted my mother would let me hang it over the fireplace back home next to Dad’s sixteen-point trophy buck.

Nick sat up at his desk, his expression serious now. “You gave me my life back, Tara. I’ll never be too busy for you.”

Nick was directly offering to help me out. No girl in her right mind could say no to that, even if she had been avoiding him. There’s only so much willpower to go around.

I hung up the phone. “Saddle up, cowboy,” I called across the hall as I stood and grabbed my purse. “We’ve got a chicken farmer to check in on.”

We snagged a car from the Treasury’s fleet and drove for what seemed like an eternity through flat, dry country. The radio was tuned to a country station to combat our boredom and the air conditioner turned on full blast to combat the outdoor temperature, which had topped out at 103 degrees. That’s August in north Texas. Brutal.

Nick had brought his stress ball with him and manipulated it in his right hand, slowly turning it and squeezing. His movements were oddly sensual and had me wondering how his hands might feel squeezing certain parts of me.

We drove past a farmer driving a green John Deere tractor through a field, kicking up dust and scattering insects, most of which veered on a suicidal path toward the windshield of the car. I was glad I wasn’t driving my precious red convertible BMW out here.

A colorful assortment of bug guts now decorated the windshield like miniature Rorschach ink-blot tests. One of the spots looked vaguely like our boss, who’d sported a towering strawberry-blond beehive since the sixties. Her hairdo had to be at least eight inches tall, held together by a thorough coating of extra-hold hairspray.

I pointed at the pinkish goo. “What’s that look like to you?”

Nick squinted at the glass. “The Lobo.”

Nick glanced my way and my crotch clenched reflexively. He always looked hot, but he was especially attractive at the moment. He’d topped his stylishly shaggy brown hair with the white felt Stetson I’d bought him shortly after sneaking him out of Mexico. Yep, I had a soft spot for cowboys. Make that
two
soft spots—one spot was metaphorical, the other was between my thighs.

Nick flashed a mischievous grin. “You know what’s the last thing to go through a bug’s mind when he hits your windshield?”

I rolled my eyes and pulled to a stop behind another white government-issue sedan parked by a rusty gate. “Here we are. The middle of BFE.”

A spray-painted plywood sign affixed to the barbed-wire fence read
PROPERTY OF THE LONE STAR NATION. TRESPASSERS WILL BE VIOLATED
.

Nick groaned. “You didn’t tell me we’d be dealing with idiots.”

“You didn’t ask,” I said. “And need I remind you that you volunteered for this assignment?”

“Next time I’ll ask for more details before I commit,” he muttered.

The Lone Star Nation was a separatist group, a bunch of antigovernment loonies who referred to themselves as “True Texans” and operated an unofficial sovereign state. For such a small organization they’d proved to be a huge pain in the ass.

The group was just one of several secessionist organizations in the state. The largest group, known as the Republic of Texas, was the most notorious. The Republic had issued numerous bogus court summons and filed frivolous lawsuits with both the Supreme Court of Texas and the International Court of Justice at the Hague, challenging the annexation of Texas in 1845 by the United States.

That’s what happens when rednecks have too much time on their hands.

After shootouts between federal agents and armed extremists in Ruby Ridge, Idaho, and Waco, Texas, the government had received a lot of flack, virtually all of it from wack jobs and nearly all of it undue. There’s no clean way to take down these types of people. They don’t exactly think and act reasonably.

Government agencies had learned to be extra careful in handling interactions with members of such groups. In 1997, state troopers had negotiated a surrender with Richard McLaren, the former leader of the Republic of Texas, after he’d been accused of fraud and kidnapping. Still, two of the group’s members had refused to cooperate and one of them had been shot dead after they’d opened fire on a police helicopter.

Thus, despite the fact that August and Betty Buchmeyer hadn’t filed a tax return since Ronald and Nancy Reagan were bumping uglies in the White House, Lu had made a strategic decision not to arrest the couple. Rather, she’d instructed me only to see what we could collect from the elderly deadbeats, perhaps make an example of them to the dozen or so steadfast True Texans who stubbornly stuck to their beliefs.

Collections work was boring as hell, essentially standing guard while staff from the collections department seized any nonexempt assets. While most tax evaders cursed and glared, others moaned and sobbed, lamenting the loss of their RVs, their collection of mink coats, their limited-edition prints. But sheez, by the time it got to that point they’d been given ample opportunity to make payment arrangements and had stubbornly refused. It wouldn’t be fair to honest, hardworking taxpayers to let scofflaws off the hook.