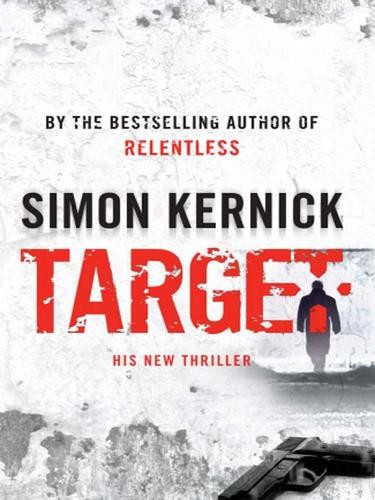 Simon Kernick
is one of Britain's most exciting new thriller writers. He arrived on the crime-writing scene with his highly acclaimed debut novel
The Business of Dying
, the story of a corrupt cop moonlighting as a hitman. However, Simon's big breakthrough came with his novel
Relentless
which was selected by Richard and Judy for their Recommended Summer Reads promotion, and then rapidly went on to become the bestselling thriller of 2007.

Simon's research is what makes his thrillers so authentic. He talks both on and off the record to members of Special Branch, the Anti-Terrorist Branch and the Serious and Organized Crime Agency, so he gets to hear first-hand what actually happens in the dark and murky underbelly of UK crime.

To find out more about Simon Kernick and his thrillers, please visit
www.simonkernick.com

For more information on Simon Kernick and his books, see his website at
www.simonkernick.com

Simon Kernick has asserted his right under the Copyright, Designs
and Patents Act 1988 to be identified as the author of this work.

This book is a work of fiction and, except in the case of historical fact, any resemblance to
actual persons, living or dead, is purely coincidental.

For Mr Pink and Ali Karim

Sir Henry Portman was a man who liked his vices. He drank like a professional, gambled like an amateur, and still managed a pack of cigarettes a day, the odd Cuban cigar and a good four thousand calories of the kind of rich, fatty food that makes dieticians tear their hair out, and everyone else salivate.

But his favourite vice – the one he could least do without and the one, if truth be told, that kept him at a half-reasonable thirteen and a half stone rather than the twenty he'd probably otherwise have been – was extra-marital sex. In twenty-eight years of marriage, Sir Henry had enjoyed a total of 347 sexual partners (348 if you included his wife), a figure he kept constantly updated in a small black leather notebook he'd bought for that express purpose. Even now, in his mid fifties, his appetites were showing no signs of diminishing.

What had diminished, however, were his looks, so more and more these days he had to rely on the services of prostitutes. This didn't bother him unduly. He found that paying for sex had many advantages. There were none of the complications associated with having secret lovers, nor the potential embarrassments caused by asking them to do things that might be considered unusual. Because where sex was concerned, Sir Henry's tastes were somewhat eclectic, which was why he was currently tied to a bed wearing a shiny PVC blindfold and not much else in an upscale Islington brothel, waiting for a svelte nineteen-year-old beauty called Nadia to come in and tease and torment him to the heights of sexual ecstasy.

He heard the door opening and Nadia making her soft, slow entrance. As she approached the bed, Sir Henry licked his lips and swallowed, barely able to stand the incredible sense of anticipation he always experienced in these first moments.

'You've been a bad boy,' she whispered in her heavily accented English, her fingers stroking his thigh, the touch so light and soft it sent him into paroxysms of ecstasy.

Nadia's fingers moved away and she made a strange mewing sound, which stopped almost as quickly as it began.

The room fell silent. Sir Henry moved about on the bed, waiting for her to touch him again.

Something warm and wet dripped heavily on to his chest and belly, moving down towards his groin. What was she pouring on him? It wasn't candle wax. That was hotter.

The dripping stopped, and he heard movement by the bed. He felt the first stirrings of concern, but it was still mixed with a sense of excitement. Was Nadia suddenly becoming more adventurous? Normally she followed a set routine.

The silence continued. Still she didn't touch him.

The PVC blindfold was ripped off him in one movement and he was left blinking hard against the brightness in the room.

Nadia stared down at him blankly. She was pale and naked and beautiful, and a narrow stiletto blade jutted out of her chest. Sir Henry saw the thin curtain of blood running down her body. There was blood on him, too. Lots of it, splattered in an angry pattern.

For several seconds he was struck dumb, registering but not understanding the terrible sight in front of him. Nadia wasn't moving. She was just standing there, her pale eyes wide open yet utterly sightless. Then, as he watched, she gradually slid down the side of the bed and disappeared from view.

A man in a snarling wolf mask that covered his whole head stood in her place. In one gloved hand he held the bloodstained knife that had just been used on Nadia. It glinted wickedly in the light from the overhead lamp. Behind the mask, the man's eyes were wide and staring.

Sir Henry opened his mouth to cry out, terror surging through him, but a gloved palm was slammed hard across it.

Then, very slowly, the bloody knife moved towards his face until the tip of the blade took up his whole field of vision.

'Do you want me to cut your eye out?' asked the man in the mask. His voice was harsh and guttural. Sir Henry recognized the accent as Northern Irish.

Sir Henry made desperate 'no' noises under the glove. He shut his eyes as the blade advanced, felt it touch the skin of his eyelid.

'I'm going to remove my hand now,' continued the man, his tone even, almost conversational. 'If you scream, I'll blind you. Do you understand?'

Sir Henry's muffled yeses seemed to convince him and he took away both the hand and the blade in one movement.

'Please don't kill me,' Sir Henry begged, hugely aware of his utter helplessness. God, he should have known that this would happen. These people were animals . . . and somehow he'd allowed himself to get involved with them. It was like some kind of terrible nightmare.

'We hear you're getting cold feet, Sir Henry,' continued the man in the wolf mask, running the blade gently down his belly, scraping up Nadia's blood.

'Don't lie. If you lie, you lose an eye. Do you understand that?'

'Good. I executed the girl so you'd know to take what I say seriously.'

'There was no need to do that. I would have taken you seriously.'

Sir Henry had a feeling that the man was smiling behind the mask.

'No,' he said, 'I don't think you would have done. But you do now, don't you? If I can kill a young woman, imagine what I could do to you. Or your wife. Or your daughter. What's her name? Jane, isn't it?' He twirled the tip of the blade through the mass of Sir Henry's pubic hair. 'She's a pretty thing. I saw her coming out of your house the other day. Yes, very pretty.'

At the mention of his daughter, Sir Henry felt his guts clench savagely. At that moment, incredibly, he didn't even think about the knife. 'Please. Not Jane. Hurt me instead if you have to, but leave her alone. I'm begging you.'

'There's really no point in begging, Sir Henry. If I have to, I'll slaughter your family one by one and feed you the pieces.'

'I want you to answer all of my questions truthfully. One mistake' – he paused, the blade touching the base of Sir Henry's penis – 'and I start cutting.'

'I'll tell the truth, I swear it!' And he meant it too. Once again, he was gambling. Making the snap judgement that he was better off to them alive not dead, and guessing that they knew everything anyway.

'Good. Now, you've been getting cold feet, haven't you?'

Sir Henry nodded vigorously. 'Yes, yes, I have, but I haven't spoken to anyone, I promise. I went to Kensington police station and I went inside but I came back out again five minutes later because I knew that it was too risky to say anything. It's just that I'm terrified things are going to go wrong, and I'm going to get caught—'

'There's no need to be,' said the man in the mask, his tone surprisingly sympathetic. 'I'm looking after the operation, and it won't go wrong on my watch. But you were right not to say anything. It would have cost you your family.' He removed the knife from Sir Henry's crotch and bent down, lifting up Nadia's corpse by its long auburn hair. 'And you can see that now, can't you? What happens if you attempt to fuck us? We can get you absolutely anywhere.'

'Please,' whispered Sir Henry, 'put her down. I can't bear to look at her.'

The man in the mask let the body go and it dropped to the floor with a dull thud.

Sir Henry swallowed. He felt nauseous. He'd had no great feelings for Nadia, but the thought that it could just as easily be his beautiful daughter lying there made him want to throw up the three-course meal he'd enjoyed only a few hours earlier. 'What are you going to do with her?' he asked.

'Don't worry about it. We know the owners of this establishment. She'll be made to disappear. If I were you, I'd worry about yourself.'

'I know you will. The lives of your family depend on it.'

With a sudden movement, the man's knife hand darted out and the next second Sir Henry felt a sharp pain at the base of his penis, and the warm sensation of blood trickling down on to his balls. He started to cry out, afraid of what had been done to him, but the man put a gloved finger to his snarling wolf lips, stopping him instantly. He knew better than even to think about defying his tormentor.

'It's just a little taster of what might happen, Sir Henry,' he said casually. 'No permanent damage.'

He leaned over and cut the bond securing Sir Henry's right wrist to the bed, then turned and walked out of the room, leaving him there, naked, bleeding and alone, wondering whether his conscience would ever forgive him for what he was about to do.