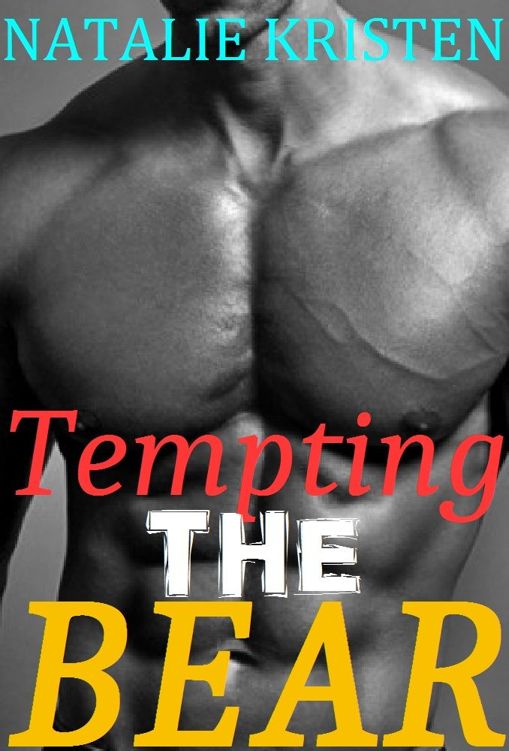 No
part of this book may be used or reproduced in any manner whatsoever
without the author's written permission except in the case of brief
quotations embodied in critical articles and reviews.

This
is a work of fiction. Names, characters, places and incidents are
used fictitiously or are the products of the author's imagination.
Any resemblance to actual locales, events, establishments or persons,
living or dead, is entirely coincidental.

Harper
Clair may be desperate, alone and pregnant, but she will fight to
protect her unborn baby. She will do everything to give her baby a
happy life and a loving family. If she could meet her true love and
create a happily-ever-after for herself and her child, that would be
really nice. But that's just wishful thinking. Nice things didn't
happen to her.

No
matter. She and her baby would make a small but complete family of
two.

Bear
shifter Jackson Gray is stunned to find a young woman in terrible
pain in a small dark lane. She is in labor, but what did Jackson
know about childbirth? Nothing, that's what!

Panicking,
panting and experiencing what feels like labor pains in his gut,
Jackson manages to rush her to the hospital in time.

Harper
and her baby are fine—for now.

Someone
is out to kill her baby.

Danger
closes in on Harper and her son, but she is no longer afraid and
alone. Harper may be human, but she is every bit as fierce and
protective as a mama bear. She is determined to live happily ever
after, not just with her little boy, but with her true love and the
wonderful family she has come to know and love.

Harper Clair put the two wine
glasses on the tray and walked steadily towards the well-dressed
couple seated at the window table. There were only a few customers
left in the restaurant. It was almost ten o'clock and the dinner
crowd had left. In about half an hour, her shift would be over and
Harper could finally go home and flop into bed.

She felt so tired, and every
muscle and joint in her body was aching. She was eating a little
better now but she still had night sweats. Harper wasn't sure if her
poor appetite and insomnia were due to stress or her pregnancy.

Harper glanced down at her
tummy. She was rather petite, and with her baggy clothes, her baby
bump wasn't showing all that much.

With a wince, she pressed a
hand to her side. Was it normal for her baby to be kicking so
violently and moving around so much in her womb?

But she wasn't carrying a
normal human baby now, was she?

Harper took a deep breath and
concentrated on putting one foot in front of the other. The distance
to the table seemed unnaturally, unbearably long. She swayed
precariously on her feet and she hurriedly put the tray down on a
nearby table to stop the glasses from sliding off the tray.

Harper gasped at the sudden
sharp pain in her tummy. The pain shot up her spine and spread
through every nerve in her body.

Cold sweat oozed out of her
pores. Harper took quick, shallow breaths and tried to quell her
spiking panic.

This couldn't be labor pains.
She was only five and a half months into her pregnancy. She couldn't
be going into labor now.

“
It's just gas and
gastric pain,” she wheezed to herself. “It's okay.
Baby, hang in there. Mummy's working now, but we'll get home soon,”
she whispered to her tummy.

The pain subsided, and Harper
took another shaky breath and tried to smile as she approached the
couple's table.

The woman didn't even glance
at Harper as she set the wine glasses carefully on the table. Harper
blinked, momentarily blinded by the glittering rocks on the woman's
fingers.

Harper was about to step away
from the table when the man drawled, “You may pour the wine
now.”

With trembling hands, Harper
took the wine bottle from the ice bucket. She bit her lip hard as
another stab of pain lanced her body. She grabbed the bottle with
both hands and straightened up after filling the man's glass.

Harper's vision was starting
to swim as tears flooded her eyes. She had never felt such pain
before. It was a miracle she was still standing.

The woman arched a penciled
brow at her and indicated her empty glass. “My wine,”
she said icily.

Harper nodded and proceeded to
fill her glass.

The man spoke but Harper
couldn't hear the words. It was just a low, droning buzz, and the
buzz wormed into Harper's head and intensified her throbbing
headache.

The woman laughed at her
companion's joke and waved her bejeweled hand animatedly. Her hand
slapped against the wine glass and toppled it. Harper watched
helplessly as the dark liquid spilled all over the table cloth and
dripped onto the woman's dress.

“
I'm sorry,”
Harper sputtered, staggering back in shock and pain. She pressed one
hand to her tummy, her mind going blank as her body screamed in
agony. The pain was growing more intense by the minute. “I'm
so sorry...” she whispered.

“
Stop saying you're
sorry, you stupid bitch! My dress is completely ruined. You can't
even afford to pay me back!” The woman turned to her companion
and whined, “Oh, Christoff, what am I to do? I love this dress
so much. You bought it for me, remember?”

The restaurant manager,
Howard, rushed up to the table, apologizing profusely and bowing so
low his forehead almost touched the edge of the table.

Stephanie dabbed at her eyes
and pouted. “Get the bitch out of my sight. I don't want to
see her.”

“
Yes, yes, of course.”
The manager bowed lower. He turned to Harper and hissed, “What
are you still doing here? Get out!”

“
I want her gone,
permanently,” Stephanie said, tugging at Christoff's hand.
“Look what she did!”

“
Of course, darling.”
Christoff turned to the manager and said, “Howard, we have
been coming to your restaurant for years. We like your
restaurant...”

“
Thank you, Mr Caldwell.
Thank you very much. You and Miss Stephanie are our most valued
customers,” Howard said, almost prostrating himself before the
haughty couple. “It is our privilege and pleasure to have you
in our humble restaurant.”

“
We will visit your
restaurant again, Howard,” Christoff said with a thin smile.
“And we don't want to see
her
on our next visit.”
He jerked his chin in Harper's direction. “Is that clear,
Howard?”

Howard spun round and glared
at Harper. He pointed to the door.

“
But Mr Howard...”
Harper stammered. She blinked hard to try to focus, but the only
thing she was really aware of was the tightening pain in her body.
It felt as though her guts were being squeezed and twisted and
wrenched out of shape. She had to clench her teeth hard so she
wouldn't cry out in agony.

She couldn't even find the
words or the energy to defend herself.

“
Please...” she
managed to whisper before the manager grabbed her by the elbow and
marched her to the door.

Harper stumbled out the door
and fell onto the sidewalk. She turned back and saw her bag being
thrown out of the door after her. Mr Howard poked his head out and
threw a fistful of dollar bills at her. “Your pay for today,”
was all he said before the door slammed in her face.

Harper crawled to her bag and
stuffed the money hurriedly into her bag. She looked around and saw
only a single car zooming by. The restaurant was situated on a
rather quiet street and the shops beside the restaurant were already
closed for the day.

There was no one around to see
her humiliation.

Harper picked herself up and
careened towards a lamp post. She clung to the lamp post for support
and forced herself to take deep, steadying breaths.

“
What's happening,
baby?” she whispered to her tummy.

She cradled her baby bump
protectively and closed her eyes, willing the pain to go away. She
wasn't ready to give birth. She had just lost her job. She wouldn't
be able to provide for her baby.

And she'd heard that shifter
babies had bigger appetites than human babies. How could she afford
to feed him?

But she would find a way. She
would protect her child and provide for him. Her child would live
and grow big and strong. She would not let anyone hurt him. No one
would harm a hair on his head. No one!

Harper stroked her stomach and
hummed a soothing lullaby. She closed her eyes and sang softly to
her baby, letting her child know that he was loved and cherished.

When she opened her eyes
again, the pain had diminished to just a dull ache in her side. She
smiled and patted her stomach. “Good boy. We're going home
now, okay? All that noise and shouting must have upset you, little
one. Don't be afraid. Everything is fine. Mummy's here. Always.”

Harper adjusted her bag on her
shoulder and trudged homeward. No one in the restaurant had come to
her aid. No one even knew she was pregnant. She had only moved to
this little town about a month ago, and she had been working in the
restaurant for only two weeks.

She didn't know anyone in
town, and she didn't trust anyone enough to tell them about herself
and her past. She wanted to stay hidden for as long as possible.
She couldn't let Douglas find her. He would kill her baby.

Harper tried to push all
thoughts of Douglas out of her head. She didn't want her baby to
know that his own father wished him dead.

She'd thought that Douglas
would be thrilled at the news of her pregnancy. Instead, he had
flown into a rage and ordered her to terminate the pregnancy
immediately.

It was only then that she
realized her folly. She had stupidly thought that Douglas loved her
and wanted a future with her. He never wanted anything with her.
She wasn't even a fling.

She was only twenty-one when
she met him. Douglas was twelve years older than her. He was suave,
confident and he would chat and flirt with her while she served him
at the diner he frequented.

She thought there was love,
romance and honesty between them. But there was nothing. She had
given him her virginity, her trust and he used her.

In tears, she had assured
Douglas that she would raise the child on her own. The child would
have nothing to do with him. But Douglas coldly told her that the
mere existence of the child was a stumbling block to his plans and
his future life.

Sylvester by Georgette Heyer
Millionaire Wives Club by Tu-Shonda Whitaker
Wolf Signs by Vivian Arend
In Constant Fear by Peter Liney
Second Chances by Roan, D.L.
The River Maid by Gemma Holden
A Blackbird In Silver (Book 1) by Freda Warrington
Murder at the National Cathedral by Margaret Truman
Till the Butchers Cut Him Down by Marcia Muller
Rebound by Aga Lesiewicz