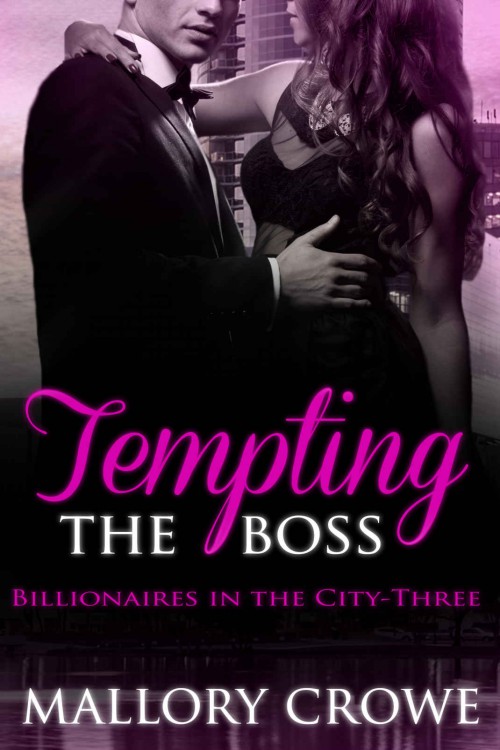 All rights reserved. This book or any portion thereof may not be reproduced or used in any manner whatsoever without the express written permission of the publisher except for the use of brief quotations in a book review. Fonts used with permission from Microsoft.

Want to get more FREE from Mallory?

Sign up for the author’s New Releases mailing list and get a free copy of Part One of the Cross Falls Saga: Falling Secrets AND a free bonus scene showing April and Sam’s first meeting years before the events in Teaching The Boss!

Dean cursed under his breath as the screw dropped from his hands and clattered onto the tile twenty feet below him.
What kind of idiot designed a light that needed screws to change a damn bulb?

He hoped the small ping of the metal hitting the ground wouldn’t attract much attention, but Victoria Green’s head whipped around to stare disdainfully at where the screw rolled to a stop.

“Shit,” he muttered as he descended the ladder, two steps at a time. Even so, he had no chance of beating the CEO to the offending piece of metal.

She narrowed her gaze at him as she picked it up off the floor, and he stopped in his tracks.

“What is this?” She held the screw in front of her.

Dean glanced over his shoulder, hoping Grace would pop in to save him from whatever hell was about to be unleashed. “It slipped out of my hands.” He squared his shoulders as he stared her down. “I would’ve picked it up.”

Victoria tilted her head and stared him down. Even in her three-inch heels, Dean towered over her, but she didn’t seem the slightest bit fazed. “This is an employee appreciation dinner. I don’t think my employees will feel very appreciated if they have to dodge nuts and bolts on the dance floor, do you?”

She rolled her eyes. “I can’t take this. Where’s Grace?”

Dean took a deep, calming breath.
Shit.
He really didn’t want Grace pissed at him. The work she gave him wasn’t too steady, but she paid well and he normally got some pretty amazing food out of it. “Last I saw, she was going into the kitchen with the caterer.”

“Thank you,” she said with obviously false sincerity, before she sauntered away.

Don’t look at her ass. Don’t you dare look…
Dean couldn’’t help his gaze from following the sway of her hips as she crossed the large hall.

Not exactly what he pictured when he thought of the CEO of a nationwide hardware retail store. Especially not one named Green &
Sons
. Rumor had it that her brother was so incompetent when it came to running the company that he was forced out by his sister, Victoria. It wasn’t really surprising that the tabloids were a fan of hers. She was smokin’ hot and surrounded by family drama.

At least, that was what Grace had told him in the quick debrief before the job. He didn’t need to read tabloids. He had enough family drama of his own back home. After he pulled another screw out of the toolbox sitting next to the ladder, he climbed back up. He just needed to get this job done and go the rest of the night without pissing off the richest person in the room.

“Your handyman is trying to kill my guests.” Victoria pushed through the swaying kitchen doors.

Grace’s jaw dropped open while the man in the white chef’s jacket awkwardly stepped back. “We can finish this later,” he mumbled before he made a quick exit.

By the time he was gone, Grace had regained her composure. “I’m reasonably certain Dean isn’t trying to murder anyone.””

Grace sighed and gave Victoria a comforting smile. “I don’t want you to worry about a thing. Dean is completely trustworthy. He’s been doing this for years, and, except for Andre, he’s my right-hand guy. Unfortunately, when setting up events of this caliber, things are bound to get missed.” Grace held up her clipboard and pointed to number twenty-three on the checklist.

Victoria leaned forward to read the small print on the massive list.
23. Final sweep of floors.

“I always make sure that after everything is set up, the floors are swept. Between flowers, table covers, centerpieces, drinks, and the number of people walking around, there’s always stuff that needs to get picked up. But I can assure you that I’’ve dealt with this all before, and it’s not new to me. I can promise you that there won’t be any debris around to trip your employees.”

Heat crept up Victoria’s cheeks.
Great.
She’d made a fool out of herself in front of the damn handyman for no reason. “You seem to have a handle on things.”

“I do. I promise. By five p.m., this place is going to look amazing and will impress the hell out of everyone, Ms. Green. All you need to do is follow the agenda I gave you. I’m taking care of everyone else.”

Victoria nodded. “That’s probably best.” Sometimes delegation was the most productive way to lead, and Grace was the best of the best when it came to event coordination. And Victoria prided herself on surrounding herself with the best people. Speaking of… “Is Simon still around?”

Now it was Grace’s turn to blush. Victoria narrowed her eyes but didn’t say anything. Instead, she filed the little tidbit away in her mind.
So her business consultant and the event coordinator were a thing? Interesting.

“There was a conference room on the forty-eighth floor that he’s set up on. I think he was getting some work done. Do you want me to call him down?”

Victoria’s gaze slid over to the window in the kitchen doors, and her focus immediately fell on the handyman, who was working on installing another one of the green lights. “I should probably go to him. If he’s working on my company, I don’t want to interrupt him.” She glanced back to Grace with a smile.

“I’ll be around if you need anything else, Ms. Green. If you can’t find me, feel free to call.”

Victoria nodded and strode back into the large hall. As she crossed the room to the elevator bay, she once again found herself looking at Dean, and she frowned at herself. Not that Dean wasn’t attractive. His jeans fit him far too well, and he had the chiseled jaw of a movie star. But he was so far from her type, she couldn’t imagine why she couldn’t drag her eyes away.

Though she definitely wasn’t leaving behind a trail of exes, she had an established pattern. Her high school boyfriend was one step away from valedictorian (behind her, which was part of the reason their relationship never made it to college), her late college boyfriend was an intern at the governor’s office, and her latest failed attempt at balancing her professional life with her personal one was with the CFO of Green & Sons.

When she had the chance to step up and lead the company out of the hole Terry dug it into, she’d had to choose between dating John and becoming the CEO of the family company. It was, sadly, an easy decision.

Dean didn’t look like a CFO or politician. He looked as if his hands were rough and callused and as if he didn’t get his muscles from any gym. They were the product of hard labor, and every inch of him was probably ripped.

The elevator doors opened and Victoria forced herself to stop imagining the handyman’s muscles.

What the hell was she doing?
The entire world was falling apart around her and she was throwing a damn party. And an expensive one at that. The elevator door opened and she strode out and into the hallway. She didn’t know which room Simon was set up in, but she turned right and eyed the open doors until she found her favorite consultant.

“Are those the Miller plant projections?” She walked into the room, deciding to announce her presence before she surprised him.

Simon West turned around, not seeming surprised to see her at all. “I didn’t think you’d still be here.”