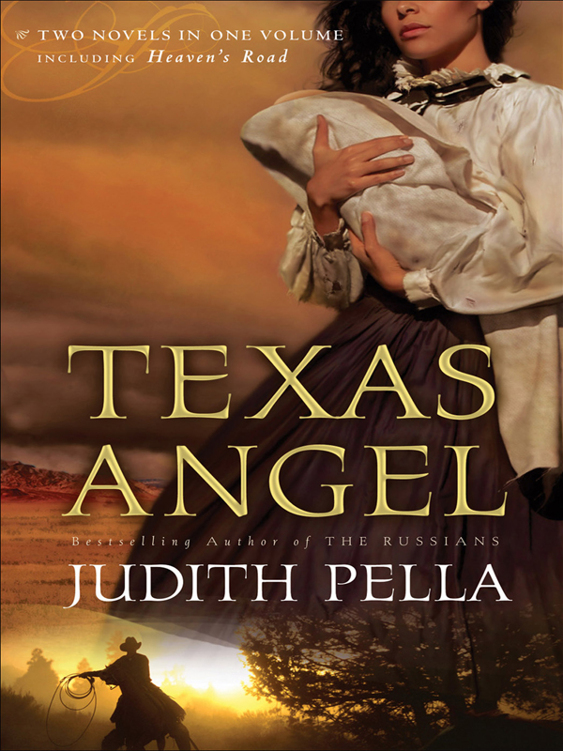 Judith Pella in
Texas Angel
shows how two extreme lifestyles come together and are drastically touched by God’s love.

Historical fiction fans will love this offering from Pella.

You’ll be riveted by this remarkable tale of adventure and romance that brings life to the courageous pioneers and the magnificence of God’s plan.

Judith Pella’s
Texas Angel
sweeps you back to the Old West where romance and adventure await you.

As one would expect, Ms. Pella’s skillful pen has given us another memorable story. Never one to disappoint, she always creates characters with such depth, you believe they really lived.

JUDITH PELA
is the author of several historical fiction series, both on her own and in collaboration with Michael Phillips and Tracie Peterson. The extraordinary seven-book series,
T
HE
R
USSIANS, the first three written with Phillips, showcases her creativity and skill as a historian as well as a fiction writer. A Bachelor of Arts degree in social studies, along with a career in nursing and teaching, lend depth to her storytelling abilities, providing readers with memorable novels in a variety of genres. She and her family make their home in northern California.

Texas Angel
Mark of the Cross

T
HE TERRIBLE SECRET WAS OUT
. Elise Toussaint Hearne had hoped for more than merely a year of wedded bliss before her happy life shattered. In fact, even now she sat alone in her room, still hoping somehow there would be a way to salvage it. Maybe she would not be summoned to answer for her awful lie. Perhaps her husband, Kendell, would show mercy on her for the sake of his love and for the child she had borne him.

When he had confronted her an hour ago with the incriminating documents, which she so poorly denied, he had been in complete shock. As he shambled from her room, shoulders hunched forward like a broken man, she had not been able to venture even a guess at what he would do next. She had simply hovered silently in her room, now nearly pitch dark since the sun had set behind the woods dominating the west side of the Hearne plantation. Perhaps Kendell had gone into town to get drunk. When he sobered up in the morning, he’d have a better perspective.

But Elise feared her husband had gone instead to where he always went when he had problems: to his parents—his mother specifically.

Was it possible they would discount the papers as mere slander, lies that were so apt to surface at election time? And if they believed the papers, would they show mercy on their daughter-in-law, for whom they had developed some fondness in the time she had been married to their son and living in their home?

William Hearne cared only about becoming governor of South Carolina. He liked Elise, but his ambitions came first. Nevertheless, it was not he who worried Elise as much as her mother-in-law did. Daphne Hearne had little love for Elise, for no one was good enough for her only son. Lately Mother Hearne had become more tolerant because Elise had proven herself of some worth by bearing a sweet granddaughter. Elise shuddered at how quickly that toleration would cease when she learned of the horrible deception Elise had carried into her marriage.

The clock on the mantel struck nine, and Elise gasped at the intrusive sound that sent her heart racing like a panicked horse. Kendell had been gone over an hour. What was he doing? Where had he gone? And what of her plight? How could she face the terrible consequences of what she had done?

Elise shivered as a breeze lifted the lace curtain on the window. But it wasn’t the cold of the spring night that made her tremble so. Her terror arose from the dreadful reality that her sweet life was about to change forever. She must face the possibility that she could lose everything. The man she loved, her child—oh, dear God, not my child!

“I mustn’t think that way,” she muttered, pulling a quilt over her icy cold body as she lay on her bed, knees curled up against her chest, as if for protection. But she found no comfort. The warmth of the covers could not penetrate the bone-deep chill of her fear.

A knock at the door startled Elise again. She groaned inwardly but said nothing. Maybe whoever it was would think her asleep and go away. But the dreaded sound came again.

Still Elise remained silent. How odd to feel so vulnerable in her own home, her own bedroom. She had come to love the Hearne plantation, located just outside of Charleston. She had never known a real home, and in spite of Daphne’s contentious nature, she had come to think of this place as such. The Hearnes were a real family. They cared about each other. Kendell’s sisters, two of them, came often to visit. Even the slaves seemed happy and content.

Elise’s hope of reprieve plummeted again when the door opened. Like a coward, she squeezed her eyes shut as if that would block out reality, but she knew the slave had come into the room and was walking toward the bed.

“Miz Elise, he says it don’t matter if you are asleep. You gots to come.”

“He says it don’t matter. He will come after you if he must. He’s right distraught.”

Elise debated on further resistance. Let him come up and drag her from her bed. What did it matter? Her life was over anyway. But an image sprang to her mind of such a scene—her flailing and screaming, his sweating and cursing, the whole house privy to her disgrace.

No, if she must fall, she would do so with dignity. There was still a small chance of reprieve.

“All right, Carrie. I will be down in a minute.”

“Can I help you with anything, ma’am?”

“No, I can manage. You may leave now.” When the slave hesitated, Elise added with as reassuring a tone as she could feign, “I will come. Don’t worry.”

Carrie left, and Elise crawled from her bed feeling as if she were leaving the only safe haven she would ever know. She went to her dressing table and lit a candle. The reflection that greeted her in the oval mirror was dim and shadowed. How very appropriate, she thought. But even the shadows could not hide the pallor of her skin nor the dark circles under her eyes. She pinched her cheeks in a useless attempt to give the appearance of health. She also tried to put her rumpled hair into some order by gathering the mass of thick dark curls—Much too dark! Much too curly!—and twisting them into a knot, which she fixed to the back of her head with a comb. The effect was severe, emphasizing her present ashen look, but perhaps that would work to her advantage. Finally, she straightened her navy blue linen day dress. It had been a mistake to take to her bed fully clothed.