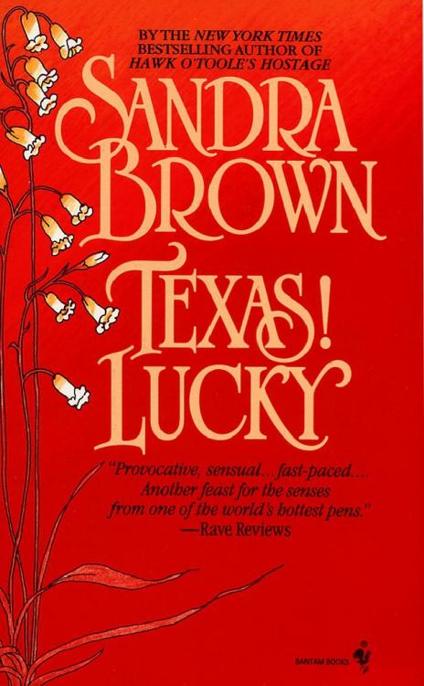 T
here was going to be trouble, and, hell, he just wasn't in the mood for it.

Lucky Tyler, seated on a barstool, was nursing his second whiskey and water. Bothered again by the rough, masculine laughter coming from one corner of the tavern, he glanced irritably over his shoulder to look in that direction.

"Might've known Little Alvin would sniff her out," the bartender said.

Lucky only grunted in response. Turning back to his drink, he hunched his shoulders and sank a little deeper into his slouching position on the barstool. He reasoned that if the broad hadn't wanted the attentions of Little Alvin or any other guy, she wouldn't have come into the lounge alone.

Describing the place as a lounge sure was euphemistic, he thought. The place was a bona fide honky-tonk. It didn't possess a single feature that would elevate it to any higher caliber of drinking hole than that.

It had first opened during the boom, fifty or so years earlier. Before the bar had a flashing neon star out front, before it had indoor plumbing, the place had served bootleg liquor to roughnecks, wildcatters, and the ladies of the night who comforted them when the wells turned up dry or who took their money when they struck black gold.

The highway tavern hadn't had a name then that anybody could remember, and it didn't have one now. It was simply known to locals as "the place," as in, "Meet'chu at the place after work for a drink." Respectable men frequented it alongside those who weren't respectable.

But a respectable woman wouldn't be caught dead inside. If a woman came to the place, she was there for one reason and one reason only. The instant a woman alone darkened the door, hunting season commenced. It was understood.

That's why Lucky wasn't too concerned about the welfare of the woman being hassled by Little Alvin and one of his least savory companions, Jack Ed Patterson.

However, when another burst of laughter erupted from the corner, Lucky swung his gaze around again. Several things struck him as odd. A long-neck beer stood on the chipped Formica table in front of the woman, along with a half-filled glass. A glass? She must have requested it, because at the place long necks weren't usually served with a glass even to a woman. Strange that she had asked for a glass.

She wasn't exactly dolled up either. Oh, she was good-looking, all right, but her makeup was conservative, and her clothing upscale and chic. She wasn't your ordinary gal-about-town on the prowl or even a housewife looking for a distraction from the daily grind or revenge on an inattentive husband. He couldn't quite pigeonhole her, and that intrigued him.

"How long's she been here?" he asked the bartender.

"Got here 'bout a half hour 'fore you came in. Know her?"

Lucky shook his head no.

"Then she sure as hell ain't from around here." The bartender guffawed, implying that Lucky kept a more accurate account of the local female population than the Census Bureau. Which was the truth.

"Soon as she came in and ordered her beer, she drew everybody's attention like flies to honey. 'Course, the rest backed off when Little Alvin showed more than a passing interest."

Little Alvin had been so-dubbed merely because he was eighth of the eight offspring born to the Cagneys. Standing 6' 5", he weighed about 290, 30 pounds of it put on since he had left the NFL several years earlier.

He'd been playing first-string linebacker for the Denver Broncos when he caused a league controversy. One of his quarterback sacks had left a rookie Dolphins player with blurred vision, stuttering speech, and a retirement pension.

The tackle had been so unnecessarily rough, Little Alvin himself had suffered a dislocated shoulder. The team management had used his injury as its reason for not picking up his contract at the end of that season, but it was speculated that management was glad of the excuse to get rid of him.

Upon his suspension, Little Alvin had returned home to East Texas and picked up where he'd left off years before as Milton Point's meanest bully. He still considered himself a superstud football hero.

Tonight neither his dubious charm nor his fame were working on the woman he'd set his sights on. Even from across the dim, smoky lounge, Lucky could see that she was growing more agitated by the minute.

The George Straight ballad blaring from the jukebox prevented him from hearing the words they exchanged, but when Little Alvin laid a meaty hand on the woman's shoulder, there was no mistaking how she felt about his romantic overtures. She shrugged off his hand and reached for her purse. She attempted to slide out of the booth, but 290 pounds of Little Alvin Cagney, along with his sidekick, Jack Ed Patterson, who had recently done time in Huntsville State Prison for assault with a deadly weapon, blocked her escape.

Lucky sighed. He was going to have to do something about this, and damned if he was in the mood for it. It had been a hell of a week. Business was rotten, and a loan payment was only weeks away from coming due. Susan was dropping hints about a diamond ring for her left hand. The last thing he needed was a run-in with a couple of lowlifes like Little Alvin and Jack Ed.

But what if their quarry had been his kid sister, Sage? He would like to think that some decent guy would come to her aid. Of course, Sage was smart enough not to get herself into a sticky situation like this. But you couldn't decline to protect a woman's virtue just because she was dimwitted.

His daddy had drilled into him and Chase, his older brother by a year and a half, that when a lady said no to a pass, the answer was no. Period. No questions asked. The woman might not be very nice for leading a guy on and then changing her mind at the last minute, but the answer was still, unequivocally,
no
. And his mother expected him to treat every woman chivalrously, no matter how trashy she was.

His ears still rang whenever he recalled the lecture his mother had given him in the ninth grade, when he brought home the delicious gossip that Drucilla Hawkins had 'done it' at the drive-in the previous Saturday night. What had gone on in the backseat of her boyfriend's blue Dodge was the talk of the school.

Laurie Tyler wasn't interested in the juicy details of Miss Hawkins's fall from grace. She had sternly warned her younger son that he had better not be overheard defaming any girl's reputation, no matter how reliable the source of the gossip was. He'd been admonished to treat every woman—and her reputation—with respect and dignity. It had been such a scalding lecture that he remembered it to this day, nearly twenty years later, at the ripe old age of thirty-two.

He muttered another foul curse beneath his breath, and tossed back the remainder of his drink. Some things you had to do whether you wanted to or not. Defending a woman from Little Alvin and Jack Ed was one of those things.

One booted foot, then the other, unhooked its heel from the chrome rung encircling the legs of the barstool. Lucky swiveled around on the maroon vinyl seat, worn slick and smooth by too many rear ends to count.

"Careful, Lucky," the bartender warned. "They've been drinking all afternoon. You know how mean Little Alvin gets when he's drunk. Jack Ed's bound to have his knife handy, too."

"I'm not looking for trouble."

"Maybe not, but if you cut in on Little Alvin's action, you'll get trouble."

Apparently everyone else in the place smelled trouble, too, because the moment Lucky left his stool at the bar, bells on the pinball machines fell silent for the first time in hours. The row of video games still beeped and burped and flashed a kaleidoscope of electronic colors, but those playing them turned curiously, instantly attuned to the sudden shift in the atmosphere. It was like the expectant stillness before a tornado struck.

Drinkers at the bar and those occupying booths ceased conversations to follow Lucky's swaggering progress across the room toward the booth where the woman was demanding that an amused Little Alvin get out of her way.

Lucky wasn't fooled by the quiet calm in her voice. Her eyes were shifting nervously between the two men. Jack Ed was a fraction of Little Alvin's size, but in his own way he was intimidating. He had a ferret's eyes and the sharp, pointed grin of a jackal. They hadn't fallen for her phony defiance any more than he had.

"How come you're in such a hurry, honey?" Little Alvin cooed. He bent over her so far, she recoiled into the corner of the booth. "We're just startin' to have fun."

Jack Ed giggled at his friend's clever way with words. His laughter broke off when Lucky spoke from behind him.

"I don't think the lady's having any fun a-tall, Alvin."

Little Alvin came around with all the grace, agility and temperament of a bull whose tail had just been given a hard yank. Lucky was standing with one thumb tucked beneath his waistband, the hand casually curled over his tooled-leather belt, and the other braced against the tarnished brass hat rack mounted on the end of the neighboring booth. His feet were crossed at the ankles. He was smiling pleasantly. Only the cocky tilt of his dark blond head and the coldness of his blue eyes belied his friendly tone of voice.

"Bug off, Tyler. This is none of your b'iness."

"Oh, I think it is. Since a dumb slab of meat like you doesn't seem to appeal to the lady, she's still fair game, right?" Lucky looked down at the woman and gave her the warm smile and lazy wink that had coaxed a legion of women out of their better judgment and their clothing. "Hi. How're you doin'?"

Little Alvin growled his disapproval and took two hulking footsteps toward Lucky, whom he championed in size by three inches in height and a hundred pounds. He swung a ham-size fist toward Lucky's head.

Lucky, for all his seeming nonchalance, was braced and ready for the attack. He parried quickly to his left, ducking the blow and simultaneously catching Jack Ed under the chin with his elbow. Everybody in the place heard his lupine teeth smash together. Jack Ed careened into the nearest pinball machine, which set up a chorus of ringing bells.

Having temporarily dispatched Jack Ed, Lucky pivoted in time to place his right eye directly in the path of Alvin's ramming right fist. Lucky had been kicked in the head by a horse when he was twelve. The kick had knocked him cold. It hadn't hurt nearly as much as Alvin's punch.

His whole body shivered with the pain of the impact. If he'd had time to indulge it, his stomach would have rebelled by heaving up two glasses of whiskey and water. As it was, he knew he had to either get back into the fight or die at the enraged hands of Little Alvin Cagney.

Bar patrons were cheering him on, except those who feared reprisal from Alvin.

Knowing all he had on his side were dexterity and speed, he lowered his head and drove his shoulder into Alvin's gut, knocking the larger man off balance.