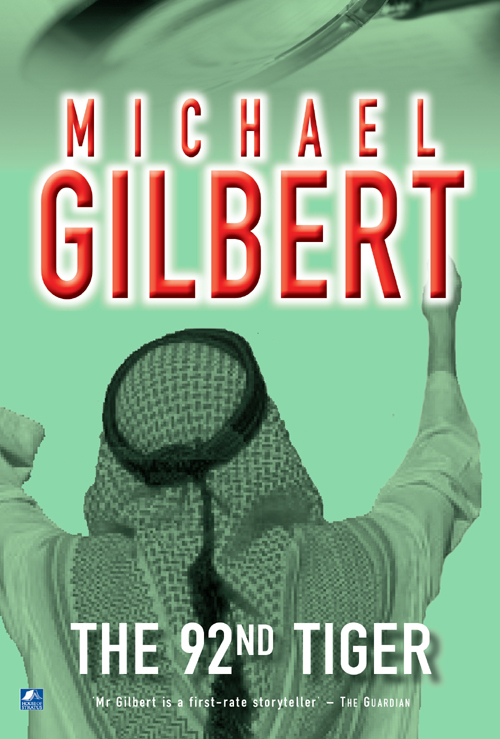 HRF Keating stated that
‘Smallbone Deceased’
was amongst the 100 best crime and mystery books ever published.
"The plot,"
wrote Keating, "
is in every way as good as those of Agatha Christie at her best: as neatly dovetailed, as inherently complex yet retaining a decent credibility, and as full of cunningly-suggested red herrings."
It featured Chief Inspector Hazlerigg, who went on to appear in later novels and short stories, and another series was built around Patrick Petrella, a London based police constable (later promoted) who was fluent in four languages and had a love for both poetry and fine wine. Other memorable characters around which Gilbert built stories included Calder and Behrens. They are elderly but quite amiable agents, who are nonetheless ruthless and prepared to take on tasks too much at the dirty end of the business for their younger colleagues. They are brought out of retirement periodically upon receiving a bank statement containing a code.

Much of Michael Gilbert’s writing was done on the train as he travelled from home to his office in London:
"I always take a latish train to work," he explained in 1980, "and, of course, I go first class. I have no trouble in writing because I prepare a thorough synopsis beforehand.".
After retirement from the law, however, he nevertheless continued and also reviewed for
‘The Daily Telegraph’
, as well as editing
‘The Oxford Book of Legal Anecdotes’
.

For there is an upstart crow, beautified with our feathers that, with his tiger’s heart wrapped in a player’s hide, supposes he is as well able to bombast out a blank verse as the best of you.

—Robert Greene,
The Groatsworth of Wit Bought with a Million of Repentance

The Tiger stared down at the girl who knelt on the pile of sacking beside him. His shirt, ripped down the back, showed his magnificent dorsal muscles. A blue-black bruise, yellowing at the centre, disfigured the left-hand side of his handsome face, but his eyes were keenly alive.

‘You realise what they plan to do to us?’ he said.

They will shoot us as soon as it is light.’

The girl was small, but well built. She was dressed in a loose wrap-around garment. From her face and accent she could have been Burmese or Malaysian. Her name was Lai-lo Padme, or Unspotted Lotus.

‘Odd thing to be happy about,’ said the Tiger.

‘I am afraid they will torture us first.’

‘They will do neither. Because, when they come for us, we shall not be here.’

‘How can we get out? There is a sentry who passes this door every ten minutes. He looks in. But he has his orders. He will not come in.’

‘If he saw you naked, might he not come in?’

Lai-lo Padme appeared to consider the matter. She said, ‘If he cannot see you, he will guess that you are hiding behind the door, and he will not come in, even if he sees me naked!’

‘That’s the whole point. He
will
see me. Or he’ll think he sees me. I shall be lying in the corner, on my face. He will think I have passed out after that last beating.’

‘How do you mean, he will think he sees you? I don’t understand.’

‘Because I am going to take all my clothes off too. There is plenty of straw. We can make a dummy life-like enough to deceive him in this light—’

‘We could try it, I suppose,’ said the Unspotted Lotus doubtfully.

‘Now here’s where we cut,’ said the producer. ‘We’ll have the dummy just off camera. It can be pushed into position. There’s no difficulty about you, Hugo. You just take off your shirt and trousers. You’ll be wearing bathing trunks underneath. Remember to keep your right side to the camera as much as possible. We want to high-light those bruises and scars. It’s Jenny we’ve got to be careful about. If we don’t get the camera angles dead right, we’ll have those old telephones getting red-hot.’

‘If I take this thing off,’ said Jenny, speaking in an accent which was suddenly more Mersey-side than Malaysian, ‘they’ll see everything down to my navel. You realise I’ll have to be made-up down to the hips?’

‘That’s the least of our worries,’ said the producer. ‘We can’t have any frontal view at all. Not on a show that comes out at seven-thirty. We start with number one camera, on your back. O.K. Jack?’

‘What have two and three got that I haven’t?’ said the number one camera-man who had red hair and a reputation for wit.

‘We cut the frame off just above the hips. Then, when we cue in the guard on three, you start turning, quite slowly, Jenny, and we pick up a half front view on number two. And when I say half front, I mean rather less than half front.’

‘That’s quite enough from you,’ said the producer. He was making notes on his script. ‘We’ll need a two-shot on three when Hugo gives the guard a karate chop. Two, you’ll have to track up quite close to the door, or you’ll block the sound boom.’

‘If I get too close to the door,’ said the number two cameraman, ‘I shan’t be able to pan round and follow Hugo out.’

The producer considered the matter. Number two was an experienced operator and didn’t make unnecessary difficulties.

He said, ‘If we angle the shot slightly, there should be room for both of you. It’ll be a squeeze.’ He took a piece of chalk from his pocket and drew two lines on the floor.

‘What about keeping the mike further back?’

‘No. We want it close in when Hugo hits the guard. Viewers nowadays know all about karate chops. They like to hear them as well as see them. All right everyone. I’m going upstairs. We’ll give it a dry run first time.’

‘It’s no good, Sam,’ said Philippa Hayes-Borton. ‘It’s just not on. It’s not that I’m against it personally. In fact, I’m on your side. You know how I had to fight to get the last thirteen for you.’

‘The last series got good ratings.’

‘They’ve all had good ratings. From number one down to number seven.’

‘Then why not keep on with it?’

‘I’ll tell you why, Sam. It’s because television’s growing up. And people are growing up with it. Nowadays, they’ve got to feel themselves involved. This Tiger character lives in a dream world.’

‘Most people live in dream worlds,’ said Sam. He realised that he was up against it, but he wasn’t going to give up without a fight. His private opinion of Philippa Hayes-Borton was that she was a bitch. And not even an attractive bitch, with her square face and her grey hair, which seemed to be tinged at the edges with yellow from the countless cigarettes she smoked. But since she was head of series, she had to be played up. And Sam, as an agent, had to do most of the playing. It was how he earned his ten per cent.

He said, ‘In a balanced programme there’s room for all sorts.’

‘Do you think I haven’t told them that? I like Hugo. He’s a good actor. And he’s got a big following. It’s the series that’s wrong, not him.’

‘Suppose we told the script-writers to up-date the series.’

Miss Hayes-Borton shook her heavy grey head so emphatically that her swinging grey hair nearly knocked the cigarette out of her mouth.

She said, ‘You’re talking nonsense, Sam. And you know it. Look. We’ve had – how many? Seven times thirteen. Ninety-one episodes. That means the Tiger has rescued ninety-one girls and knocked out ninety-one villains. Mostly foreigners. There’s hardly a member of the United Nations hasn’t contributed at least one villain. The series is set hard. Set in concrete. If you tried to modernise it you’d crack it wide open.’

Sam didn’t bother to argue with this, because he knew it was true. Like the seasoned campaigner he was, he shifted his ground and said, ‘What do you suggest?’

Marie Antoinette by Kathryn Lasky
Chameleon by William X. Kienzle
For Nick by Dean, Taylor
Prized Possessions by Jessica Stirling
Baby Mine by Tressie Lockwood
Florian by Felix Salten
Girl in a Box by Sujata Massey
Acts of faith by Philip Caputo
The Fallen One by Kathryn le Veque
Dust Devils by Smith, Roger