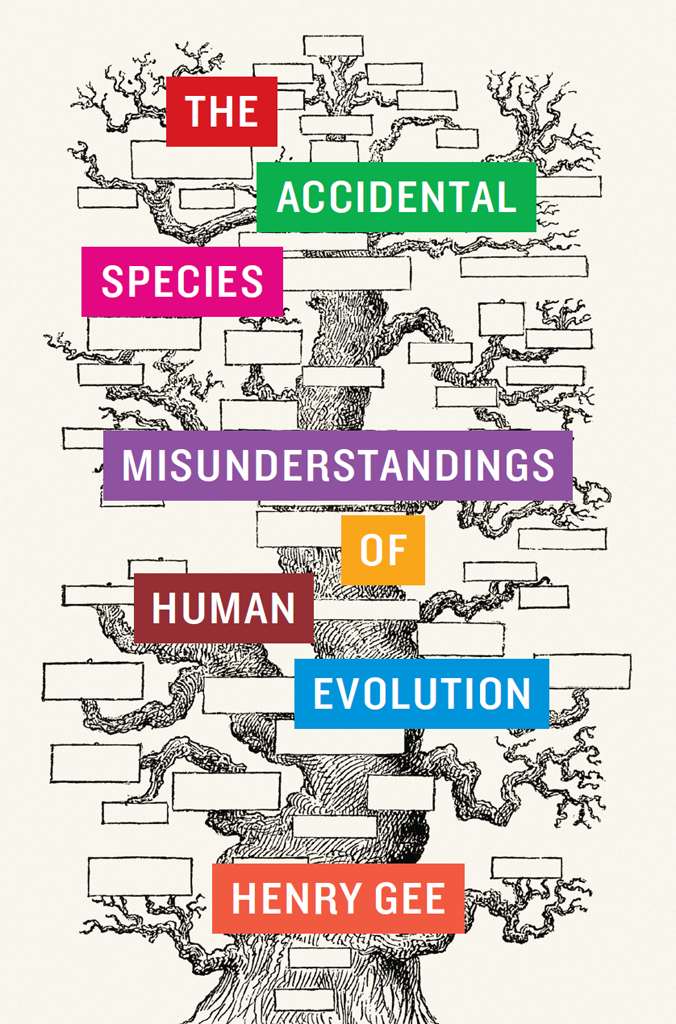 Henry Gee is a senior editor at
Nature
and the author of such books as
Jacob’s Ladder
,
In Search of Deep Time
,
The Science of Middle-earth
, and
A Field Guide to Dinosaurs
, the last with Luis V. Rey. He lives in Cromer, Norfolk, England, with his family and numerous pets.

The University of Chicago Press, Chicago 60637

This paper meets the requirements of ANSI/NISO Z39.48-1992 (Permanence of Paper).

The University of Chicago Press
Chicago and London

in the hope that he’d have approved

5. SHADOWS OF THE PAST

8. THE DOG AND THE ATLATL

9. A CLEVERNESS OF CROWS

Here’s the thing. It’s the curious phenomenon in which otherwise sane and rational news reporters lose all sense of reason or proportion when confronted with anything to do with human evolution, no matter how trivial or (ultimately) inconsequential it might be. Scientists make all kinds of discoveries every day, but almost all add just one small brick to a wall of knowledge that’s sky high. Very few are deserving of any press coverage at all, let alone in the tumescent tones reserved for human evolution. Yet it seems that any paper on human evolution is fair game for the breathlessly orgasmic treatment usually reserved for voice-overs for commercials for expensive ice cream. If all discoveries are treated the same way, one is forced to wonder, then no discrimination can be made between them, and the effect is a kind of dull infantilization in which the significance of the discovery is obscured, and science as a whole is done a disservice.

A recent case was the media brouhaha surrounding the discovery of a fossil primate called
Darwinius masillae
. If you care to look up the scientific paper in which
Darwinius
is described, you can—it’s freely accessible to anyone.
1
If you do, you’ll find a perfectly fine description of a rare and beautiful fossil. If you read carefully, you’ll see that
Darwinius masillae
is one of a number of primates belonging to an extinct group called adapids.
Darwinius
is a particularly fine specimen of an adapid, but it does not reveal any exceptional insight into the evolution of adapids or of primates as a whole. The evolutionary significance of adapids is debated by specialists, but most agree that they are more closely related to lemurs and bush babies than modern monkeys or apes, let alone humans.

The media circus (there is no other word) implied something rather different—that the fossil represented a crucial stage in human evolu
tion. It was the “link.” It’s a fair bet that whereas most people won’t have read the scientific paper, with all its technical terminology, they might very well have seen the TV special and accompanying book, launched in a blaze of flashbulbs.

It is partly because of this that I have written this book. My task is to explain why terms such as “missing link” encapsulate more than a century of error in thinking about evolution, particularly of human beings. They reinforce a monstrous view of evolution whose function is to cement our own self-regard as the imagined pinnacle of creation, the acme, alpha, and omega of evolution.
2

Evolution is a word we use to describe changes in organisms due to the interaction of hereditary variation, superabundance, environmental change, and time. Evolution has neither memory nor foresight. It has no scheme, design, or plan. Now, it might be the case that trends, such as one leading remorselessly and finally to the human state, are apparent in evolution, but these are, by necessity, seen after the fact, and are not built into the process beforehand. The patterns we see in life are the results of evolution, and are contingent. In and of itself, evolution carries no implication of progression or improvement. Absolutely none. Zip. Nada.

The term “missing link,” however, speaks to an idea in which evolving organisms are following predestined tracks, like trains chugging along a route in an entirely predictable way. It implies that we can discern the pattern of evolution as something entirely in tune with our expectations, such that a newly found fossil fills a gap that we knew was there from the outset. Quite apart from the impossibility of knowing whether any particular fossil we might find is our ancestor or anyone else’s, this is a model of evolution that is at once entirely erroneous, and also rather sad.

In my time as fossil-watcher at
Nature
, the most interest has been sparked by fossils that challenge our expectations, rather than those that confirm them: jolting us out of well-worn mind-sets and forcing us to look at the world in an entirely new way. Fossils such as
Sinosauropteryx
, the first of many dinosaur species announced that had feathers, or feather-like integumentary structures, prompt us to reassess the evolution of birds and flight; fossils of the aquatic, fish-like amphibian
Acanthostega
and the amphibian-like fish
Tiktaalik
compel us to reassess our ideas about how fish evolved legs and left the water; fossils such as
Homo floresiensis
, with its mute assertion of the unexpected yet
likely richness of human diversity in the recent past, show us that there is more than one way to be counted as human.

Whatever its position in evolution,
Darwinius
was a living organism worthy of study and respect as a creature in its own right; it did not exist by virtue of being a staging post in the predictable evolution of anything else. For that reason, hailing something—
anything
—as a missing link only cheapens that which we wish to exalt.

In this book I shall show you how and why the view of evolution presented in the popular media is wrong and why we cannot use it to bolster our own position in creation. I shall also show you how to challenge what one reader of a draft of this book has called “human exceptionalism”—the tendency to see human beings as exceptional by virtue of various attributes such as language, technology, or consciousness. There is nothing special about being human, any more than there is anything special about being a guinea pig or a geranium. This insight should allow you see the world afresh, and marvel at each and every creature as it is, for its innate wonder and uniqueness, not as a way station toward some nebulous, imagined transcendence.

The very beginnings of this book lie with two friends, fellow authors and mentors. The first was paleontologist Chris McGowan. I bumped into Chris in the lobby of the Congress Hotel in Chicago in 1996, where we were both attending the North American Paleontological Convention. I was looking for an agent at the time, and, as I admired Chris’s books, asked him for a recommendation. He kindly gave me the details of his agent, Jill Grinberg, who represents me to this day.

“You should write a book about human evolution,” Chris suggested, helpfully.

“But the World and his Dog have written books about human evolution,” I complained—not without justification, as I’d just reviewed a whole stack for the
London Review of Books
.
3
“What the world does
not
need,” I went on, “is yet another book on human evolution.”

The second was the late John Maddox, editor of
Nature
, who in 1987 hired me to work on that august, historic magazine as a junior reporter. I was an unlikely candidate, with virtually no writing experience, and I hadn’t yet completed my PhD. But Maddox inexplicably took a shine to me, took me under his wing, and taught me all I know—I owe him an immense debt.

In 1998 Maddox published a book called
What Remains to Be Discovered
.
4
As anyone who read the book and knew its author would instantly realize, the book was characteristic—astonishingly erudite (Maddox really did know
everything
), arch, iconoclastic, exasperating, contrary, and prescient. What set this book apart from the mass (and still does) was Maddox’s conviction—distilled from a lifetime in and around science—that the most interesting things about science are not what we know, but what we
don’t
know. To go further, it is a fascination with the unknown that motivates scientists. Part of the reason is an intuitive understanding that the more we find out, the more our ignorance grows.

It is a wonder, therefore, that some people—including educators, journalists, and scientists—do not seem to
get
this. To them, science is all about Facts—like the educational program of Mr. Gradgrind in the opening scene of Charles Dickens’s
Hard Times
. Facts equate to Truth, and science, they appear to think, is a zero-sum game, all about increasing the quantity of truth and diminishing the net volume of ignorance. In reality, science is about neither Facts nor Truth, but the quantification of doubt. In the small corner of reality that is available to us, scientists set limits on ignorance—but can never banish it entirely. And, to repeat, the more we discover, the more extensive we find the ocean of ignorance. The well-worn response to any new finding—that it “raises more questions than it answers”—is a cliché for good reason. When I go to talk to scientists about the inner workings of
Nature
, I announce—with pride—that everything
Nature
publishes is “wrong.” This shouldn’t really be as shocking as it is. After all, any answer in science isn’t the Last Word, and indeed can never be so. All scientific discoveries are provisional, set to be overturned by results gained from more data, better instrumentation, and new ideas.

The book proposal I initially sent to Jill was called
Dinosaurs Don’t Climb Trees
, which morphed into
Thirty Ghosts
and eventually
In Search of Deep Time
, in which I aired the idea that knowledge is not a simple matter of accumulating Facts, but circumscribing more nebulous realms of doubt. I didn’t put it in so many words, though—what came out was an exegesis on cladistics, a method of reconstructing evolutionary history that circumvents the assumptions paleontologists and others make about the completeness of the fossil record such that we can reliably read it as a story, in any scientific sense.

That creationists quoted from this book with gusto was perhaps to
be expected (I address this issue later on in this book), but what I hadn’t expected were howls of indignation from some paleontologists accustomed to using the records of various organisms as vehicles to infer past history.
5

My Darrling by Krystal McLean
The Rancher's Adopted Family by Barbara Hannay
The Fellowship for Alien Detection by Kevin Emerson
Quarantined Planet by John Allen Pace
The Dark Side by M. J. Scott
Kevin J Anderson by Game's End
Warlord (Outlaw 4) by Donald, Angus
Under This Blazing Light by Amos Oz
Ignite Me by Tahereh Mafi
The Last Year of Being Single by Sarah Tucker