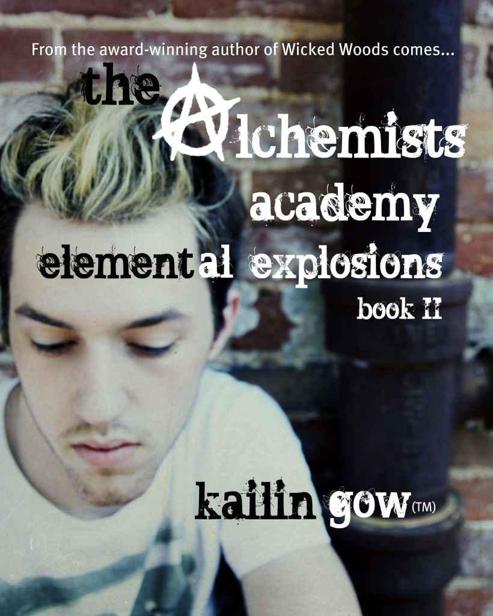 Published by THE EDGE

THE EDGE is an imprint of Sparklesoup LLC

All Rights Reserved. No part of this book may be reproduced or transmitted in any form or by any means, graphic, electronic, or  mechanical, including photocopying, recording, taping or by any information storage or retrieval system, without the permission in writing from the publisher except in case of brief quotations embodied in critical articles and reviews. Please respect the hard work of the author and do not post on internet to share or resell illegally. The e-version of this book is sold only through authorized major retailers.

This is for Team Kailin:  You know who you are. You’re the ones who help make the magic happen with me.  Thank you!

W
irt dreamt that he was sitting in his room, acutely aware it was a dream. Only it wasn’t his room. Not now. His room was the one at the Alchemists Academy that he shared with Spencer, his half of it a complete mess while Spencer’s was pin neat.
This
room was the one he’d had in England with his last foster parents, Joan and Peter, decorated according to their idea of what a boy his age should have liked, and several years too young for Wirt as a result. There was the bed, the small desk, the wardrobe with the familiarly unexplained dents in the front. Not to mention the football themed wallpaper. Wirt hated football.

Without thinking about it, Wirt found himself wandering downstairs, a strange sense of excitement in his stomach. Somehow he knew, in that way you did in dreams, that it was Christmas morning, and that they would be waiting for him in the kitchen, ready to exchange presents. That was even more proof that this couldn’t be real, because he had never actually done that with Joan and Peter. As with so many of the places Wirt had stayed, he hadn’t been there long enough.

Sure enough, there were two figures waiting for Wirt in the kitchen. Only it turned out that they weren’t his familiarly ineffectual foster parents. A man and a woman, both pale and dark-haired, stood in the middle of the kitchen smiling at him. They seemed strangely familiar, and for a moment Wirt couldn’t help noticing how much they looked like him.

Of course they do, he pointed out to himself then. What else would my parents look like? Wirt knew that they were his parents in the same way that a flower knows which way to turn towards the sun, with the curious certainty that you only ever get when you’re asleep. That he hadn’t known it a moment ago didn’t seem to matter. Given that Wirt had never seen his parents when awake, he wasn’t sure how he knew it now, either.

He handed over a couple of presents that he hadn’t been aware of carrying, which turned out to be socks and a multicolored scarf when his parents opened them, suggesting that Wirt was every bit as bad at buying presents in his sleep as he was when awake. Even so, they smiled in a way that suggested that Wirt had gotten them exactly what they had always wanted. His interest increased when his mother held out a brightly wrapped and beribboned box, which Wirt held for a moment, staring at it. He’d never had this. This moment of anticipation when he didn’t know what he was going to get, with his family looking on.

The moment didn’t last long, and Wirt opened his gift in a shower of wrapping paper. His parents looked on, those same smiles present on their faces. He looked down into the box, only to see that it was empty. Or not quite empty. Inside was a square of paper, on which careful handwriting stood out clearly. Wirt picked it up and read the words “Merry Christmas, beloved son. You cannot see, taste, or smell your gift, but you will know it when you feel it.”

“What?” Wirt asked. “I don’t understand. Is this some sort of riddle?”

His dream mother and father didn’t say anything. They just smiled and stared at the box in a way that suggested that Wirt was missing something. Not knowing what else to do, Wirt reached down into it, searching it by feel in case there was something at the bottom that he might not have noticed.

There was. Wirt yelped as something closed around his wrist, and tried to yank his arm back. It didn’t move, and as Wirt looked down, he saw dark fingers clasped on his arm. They weren’t just dark-skinned; they were absolutely black, as though carved from onyx or jet. They were as implacable as stone too, refusing to relinquish their grip as Wirt tried to jerk away.

“Help me,” he said to his parents, but they just shook their heads sadly, staring in that way parents had that told you that whatever was happening was for your own good.

The arm pulled at Wirt, and it pulled with far more strength than Wirt had ever experienced. He tried his best to brace himself against it, but slowly, inexorably, the hand drew him towards the box. That swirled with darkness now, and Wirt got the feeling that it was suddenly far deeper than it had been a moment ago.

He found out as the hand dragged him in, though how he fit into the box, Wirt wasn’t sure. He only knew that he fell. Only after a second or two, he wasn’t falling. He was walking along a tunnel instead. The walls were of natural earth, while huge tree roots showed up at intervals like roof beams and standing stones lined the walls, marks on them seeming to tell a story that Wirt could not understand.

The tunnel came to an end, and Wirt found himself in a cave. It was huge, and smooth, without the craggy outcrops of rock Wirt might have expected. There were no torches, but the walls seemed to glow with reflected light. It was one of those things that Wirt had come to expect. In the middle of the floor rose a stone slab, grey and imposing. Though perhaps not as imposing as the form of the armored figure laying on it.

As Wirt drew closer, he got a closer look at that figure. He was a young man, broad-shouldered and blond, wearing a mixture of plate armor and chainmail, marked with the insignia of a dragon and a crown. Wirt knew the crest marked him as not just another knight, but a royal knight.

The other young man’s eyes flickered open, focusing on Wirt. It seemed to take him a moment to gather himself, as though the knight had been asleep for a long time. How long, Wirt could not be sure, but he couldn’t help noticing that the armor had cobwebs on it in thick layers around the joints. The royal knight’s gaze was direct, and something about it told Wirt that this man was used to people following his commands. No, not something about the gaze. Something deeper.

“Merlin,” the man on the slab said, looking at him.

“What? Where?” Wirt looked around, and then looked down at himself. He wasn’t wearing anything that he would normally have chosen. Instead, he was wearing some sort of robe, an almost silken grey, edged with silver lettering that he couldn’t read. It looked like the sort of thing one or two of the teachers at the school might have worn, though even most of them seemed to prefer more modern things than this.

“Merlin? It is you, isn’t it?” The knight looked at Wirt for a long moment and then nodded. “You broke the spell. You brought me back. You succeeded, Merlin.”

Wirt wanted to tell the man that he had got the wrong person, but he found that he couldn’t. Maybe this part of his dream wasn’t meant to make sense. Instead, he had to follow as the knight stood, brushing cobwebs from the joints of his armor and looking around the cave.

“Do you know where we are?” the knight asked. Wirt got the feeling that he was used to Wirt having the answers to things. That was certainly more than Wirt’s teachers were used to.

The knight nodded and seemed to come to a decision. “We must find the others.”

“And we must find my sword too. That is vital. I just don’t feel properly dressed without my sword.”

Wirt shook his head in apology. “What sword?”

The knight looked at Wirt again. “Are you well, Merlin? We must find my knights, and we must find Excalibur.”

Wirt at least understood that part. “Isn’t Excalibur King Arthur’s sword? The one he pulled out of the stone?”

“Hang on,” Wirt said, trying to keep up. “Your sword?
You’re
King Arthur?”

The knight’s eyes narrowed a little. “Are you making fun of me, Merlin? Only, I really don’t think this is the time or the place. You know that I’m not at my best in the mornings even when I haven’t been… well, like this.”

The royal knight looked at Wirt, and again, Wirt couldn’t help the feeling that this man was born to command. Wirt could easily imagine him commanding armies, or ruling from a castle, or giving orders to hordes of retainers. Given the faint look of annoyance on the knight’s features, Wirt could also imagine him having wizards who didn’t do his bidding locked up.

“Good.” The knight swept Wirt up in a hug that was all the more crushing for wearing armor while he did it. “You know, it’s really good to be back, Merlin old friend.”

Wirt, who was having a certain amount of trouble breathing, could only nod. He still didn’t know why this strange knight was calling him Merlin, but he also still couldn’t quite manage to point out the mistake.

King Arthur stepped back and took another look around the cave.

“Now, where did you say my sword was? Good to see that it’s not stuck in the stone this time, at least, but I really do need it back, Merlin.”