Read The All-Day Fat-Burning Diet: The 5-Day Food-Cycling Formula That Resets Your Metabolism To Lose Up to 5 Pounds a Week Online

The All-Day Fat-Burning Diet: The 5-Day Food-Cycling Formula That Resets Your Metabolism To Lose Up to 5 Pounds a Week

BOOK: The All-Day Fat-Burning Diet: The 5-Day Food-Cycling Formula That Resets Your Metabolism To Lose Up to 5 Pounds a Week
>>DOWNLOAD HERE >>READ ONLINE NOW
ads 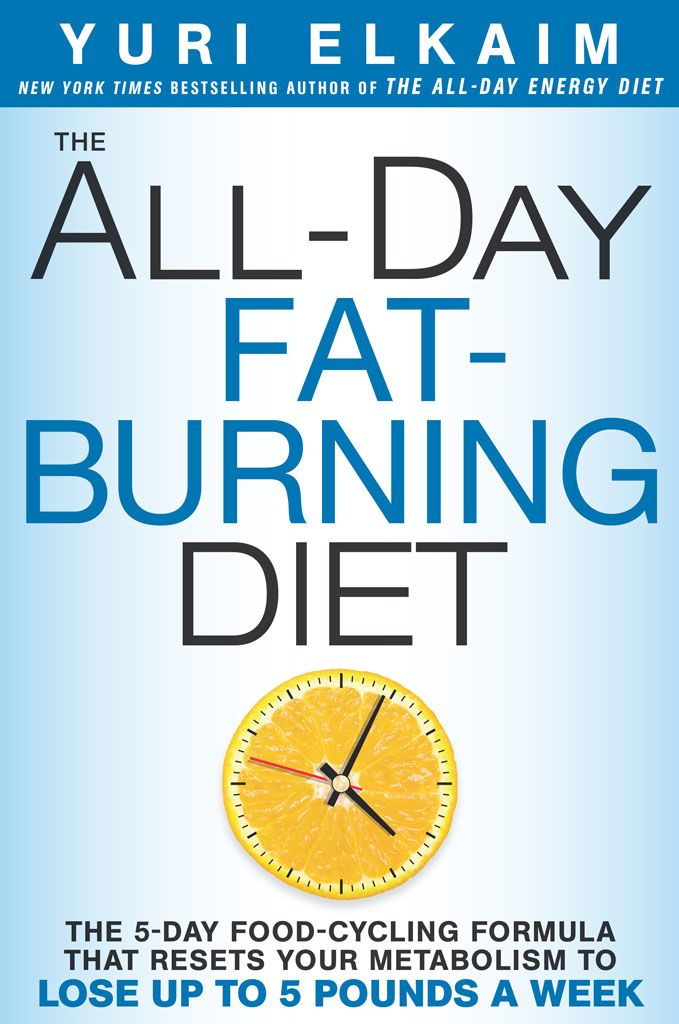 Dedicated
to my wife, Amy, for giving me the extra nudge at 5 a.m. each day to write this book . . . and to Oscar, Luca, and Arlo for making it necessary to get up that early. I love you guys.

I
NTRODUCTION
: I F
EEL
Y
OUR
P
AIN

PART
I: WHY YOUR BODY’S NOT LETTING YOU LOSE WEIGHT

CHAPTER
1:
Is Your Body Stopping You from Losing Weight?

CHAPTER
2:
6 Reasons Why You Can’t Seem to Lose Weight

CHAPTER
3:
Step 1: Set Yourself Up for Success

PART
III: HOW TO EAT YOUR WAY THIN

CHAPTER
12:
How to Stay Lean for Life

T
he reason I wrote this book is simple: Despite all the attempts we’ve made as a society over the past 50 years to get slimmer and improve our health, we’ve accomplished almost the complete opposite. Today, many people are frustrated with repeated weight loss (and weight regain), diet failures, and a chronic inability to look and feel the way they want. You might be one of them.

I want you to know that it’s not your fault. You’ve been raised in a world characterized by confusing information, conflicting advice, and man-made foods that wreak havoc on your body. So much of this is out of your hands, so please don’t beat yourself up over it. With the sound information and the proven plan you now have in your hands, you can make a change. The ball is in your court.

I can show the way to the promised land, but you have to do the walking. You have to put in the work. I’ll be with you each step of the way, but I need you to make a decision that you’re in. All change happens in a split second. And it happens when you make a decision. If you’re sick and tired of struggling with your weight and feel you deserve better (because you do), then make a decision right now to commit to following my lead.

All I’m asking is that you follow my plan for the next 21 days. Can you do that with me?

Believe me, I understand that change is uncomfortable. It’s the last thing we humans want to do. But to get the body you want, you can’t just dabble. You have to commit. You need to master yourself, your
diet,
and your habits. That’s what I’m here to help you accomplish with this book.

For the past 15 years, I’ve helped more than 500,000 people achieve their health and fitness goals. My mission is to help 10 million people by 2018 and 100 million by 2024. Yes, I’m on a pretty ambitious mission, but I have no doubt that I’ll accomplish these goals.

My unique ability lies in how I simplify people’s lives by erasing the complexity from diet and fitness, boiling them down to simple, tangible action steps that give people a principle-based understanding of their health. In this book, you’ll have many aha moments as I dispel a number of health myths—especially diet and exercise myths—and give you easy-to-follow advice and a 21-day plan that doesn’t require counting calories, depriving yourself, or killing yourself in the gym.

If you’ve been told that eating less and exercising more are the keys to losing weight and you’ve tried multiple diets with temporary success and ultimate failure, then this book is the solution you’ve been looking for. Why? Because my plan eliminates the causes of weight gain and pushes the reset button on your fat-burning capacity. And it does so in a way that also improves your health.

Yes, you’ll experience quick weight loss. And yes, this weight loss will likely last longer than ever before. The reason is that we’re going to provide your body with a plan that will help restore it to its “factory setting”—one where it’s primed to burn fat, not store it. Very few people understand the real causes of stubborn weight gain. Here’s the secret: Your body is set to either gain, maintain, or lose weight all day, and no combination of calorie cutting, exercising, or restrictive dieting will help you look and feel great unless you reset your body to burn fat and lose weight on autopilot.

Let me show you how.

I Feel Your Pain

A
s a child and young man, Adam never really knew what it meant to be slim, fit, or even reasonably happy. For nearly 20 years of his life, he struggled with his weight and was mercilessly teased by his friends and even his older brother for being so chubby. There was no limit to the names they called him, and he was often the last kid picked in gym class to join a team. He thought this misery was normal.

What’s strange was that Adam didn’t eat much differently than his skinny brother, nor did he eat a great deal more. They both feasted regularly on the same amount of junk food—hot dogs, microwave dinners, grilled cheese sandwiches, chocolate bars, and plenty of upsized, cholesterol-laden specials from far too many drive-thru windows. Neither of his parents was overweight, nor were his grandparents.

What could account for Adam’s girth? Was he just born that way and destined to remain hefty as long as he lived? Why was it such a struggle for him to lose even a pound while his brother seemed genetically programmed to be skinny no matter how much crap he ate? Before I answer that question, I have a confession: Tubby little Adam was my brother. I was the wicked, skinny brother.

You’re certainly familiar with my type; you’ve seen me in several Disney movies—that mean, slender grouch who is constantly picking on his pudgy, gentle sidekick. That was the two of us, and I was
unrelenting.
I bossed him around, belittled him whenever I could, and forced him to play soccer and road hockey with me even when he didn’t want to. I was awful.

As much as it hurts to say this, and even though I’ve changed, I was a bully—at least to him. Mocking him and making him do my bidding was a sport to me, and I didn’t fully understand just how much my taunting and teasing hurt him on the inside. I’d like to believe that if I’d known, I would’ve stopped, but that’s hard to say. Thankfully, the universe has a funny way of evening the score, as you’ve no doubt seen in those same Disney movies I mentioned. Eventually, our terrible diet caught up with me as well, and though I didn’t put on an inch of fat, I’d end up suffering just as much as Adam did.

One evening, just a few days before my 17th birthday, I hopped into the shower after a particularly draining soccer practice. As I ran my fingers through my flowing brown hair, a sense of calm washed over me. Then, I looked at my hands. Both of my palms were streaked with thick clumps of my hair. Panicked, I touched my head, only for more to come off in my hands. What was happening to me? I could barely get to sleep that night, but when I finally did, I soon woke up to a real-life nightmare. My pillow was covered in hair. In less than 6 weeks, I would lose all of my hair—even my eyelashes. I was completely bald from head to toe.

I walked through the halls of my high school with all eyes trained on my shiny new head. Without eyelashes or eyebrows, I looked like an alien fit to be dissected in the biology lab. People jeered, stared, and laughed. Many people stayed as far away from me as possible. They wondered if what I had was contagious. This was my senior year of high school, when I was just about to set foot into the world of adulthood. I was crushed, scared, and confused. There was nowhere I could hide.

This was far worse than male-pattern baldness; this was something else. My immunologist told me that I had an autoimmune condition called alopecia. However, he had no answers beyond that diagnosis: Why did it happen? He didn’t know. What could I do? He didn’t know. And after 7 painstaking years of dealing with the medical com
munity,
I came to realize that most doctors didn’t know either. No matter what type of specialist I consulted, not a single doctor had any idea what to do other than to inject cortisone directly into my scalp. Not once did any of these general practitioners or specialists ever speculate what may have caused my health problems or what could be done to permanently solve them. They were more interested in getting me on experimental pills or steroid creams or injecting my scalp with who knows what. By the time I was 24 years old, I was fed up. My frustration led to a life-changing decision.

Realizing that our “health care” system was not going to help me get back to better health, I vowed to crawl under every rock and read every book I could, if necessary, to figure out what was wrong with me. If no one could give me any answers, I was going to find them myself. I would be the source of my own healing.

First came 4 years of study at the University of Toronto, from which I graduated with a degree in physical education and health/kinesiology. I didn’t view this as a great accomplishment, though, as I still hadn’t grasped how to truly be healthy. My next step was to enroll at a natural nutrition school. It was there that I learned that my autoimmune disorder and other health issues were greatly related to years of dietary abuse. My athleticism was of little consequence; I was rotting from the inside out.

I made a decision to set my body on a healthier course, and with that, I ditched several foods from my diet. Within a few short months, I was feeling my old energy return; moreover, most of my hair had grown back. My digestive problems, eczema, and breathing problems vanished as well.

You might be wondering what, if anything, this has to do with weight loss. What I came to learn during this harrowing period is that our health is far more dependent on our diet than we’ve been led to believe. An unhealthy diet can manifest itself in all kinds of ways. I believe it caused me to lose my hair and, more insidiously, led to my suffering from chronically low energy, a condition that I addressed in my first book,
The All-Day Energy Diet.
In this book, I’ll take a look at how our awful eating habits and other lifestyle decisions flip on the
fat-
gain switch in our bodies. This is a trend I’ve personally witnessed in my work helping thousands of personal clients and more than half a million online clients and viewers develop lean, fit, and healthy bodies over the past 2 decades. Although low energy levels and fat gain arise from the same origin, they require different fixes.