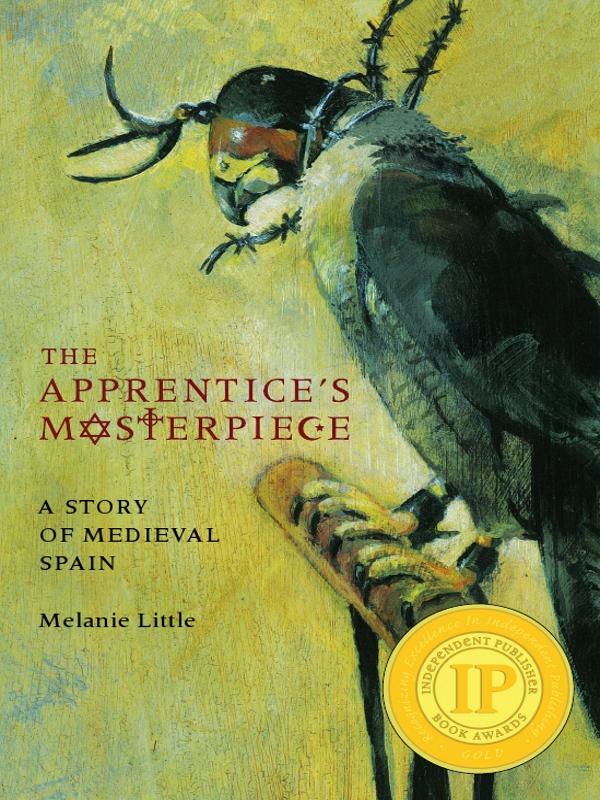 A STORY
OF MEDIEVAL
SPAIN

This book is dedicated to
victims of intolerance
everywhere, and to those
who have resisted by asking
questions, even if only of
themselves.

You can burn the paper,
but you cannot burn what it contains;
I carry it within my heart.

SPAIN HAS ALWAYS BEEN a place of stories. In fact, the first great novel,
Don Quixote
, came from Spain. Medieval Spaniards were enchanted by tales of knights and ladies, and even the kings and nobles loved the rather far-fetched story of their origin from the Greek demigod Hercules. But sometimes this fondness for storytelling had a dangerous side.

In the years leading up to what history books call the Golden Age of Spain, the country was divided into three separate kingdoms: Christian Castile in the center, Christian Aragon to the east, and the small but important Granada, ruled by the Muslim dynasty of the Nazrids, at the southern tip. On October 19, 1469, Prince Fernando, heir to the throne of Aragon, married Princess Isabella, heiress to the throne of Castile. The first stone on the road to the great dream of “One Spain” had been set.

But Spain had already had a Golden Age. From 711 A.D. until the twelfth century, it was known as the kingdom of al-Andalus, ruled by Muslims who had come from Damascus in Syria. The Muslims' holy book, the Koran, taught them to respect other religionsâparticularly those of the other “peoples of the book,” Christians and Jews. The conquered Christians of al-Andalus were allowed to practice their own faith and speak their own language; so, too, were the Jews, who had been settled in Spain since Roman times. Yet many chose to learn Arabic, and a great society of culture, learning, and coexistence (often called
convivencia
) flourished. For more than a hundred years, the Spanish city of Cordoba was the seat of the caliphsâ the supreme leaders of the Muslim world. Because of them, important books on medicine, science, and philosophy were brought to Europe. Cordoba's libraries grew to contain nearly half a million volumes.

With the gradual Christian “reconquest” of Spain, Muslims and Jews were at first treated with similar respect. The three cultures continued to live side by side. Muslims and Jews were still relatively free to practice their faiths. But they were subject to heavy taxes unless they converted to Christianity. Both Mudejares
â
Muslims living under Christian ruleâand Jews were encouraged, and often forced, to remain in sections of cities enclosed by walls and guarded gates. New laws barred them from certain kinds of work, from marrying or employing Christians, from wearing fine clothes, and even from leaving their quarters on Christian holy days. They had to wear badgesâin Castile, yellow for Jews, red for Muslimsâso Christians would know “what” they were and be warned. The Crown and the Church claimed that Jews were constantly trying to convert Christians to Judaism, though there is no historical evidence to support this. In 1483, Jews were expelled from southern Spain.

Cordoba became a place of fear. It was now home to large populations of conversos: Jews who had converted to Christianity. Many had been forced to convert against their willâsome upon pain of death. Others had chosen to convert for their own reasons, especially to stay in Spain. Spainâcalled
Sepharhad
in Ladino, the Spanish-Jewish languageâwas their new Jerusalem, their beloved home.

Encouraged by the Church, people began to turn against the conversos. A wild story spread that a converso girl had poured urine from a window onto an image of the Holy Mary in the street below. In supposed retaliation, hundreds of conversos were massacred. After that, the lives of the remaining Spanish conversos got much worse. They faced discrimination in their businesses and professions, in church, and in their everyday lives. They were often harassed or assaulted in the street.

Increasingly, the remaining Jews, conversos, and Mudejares were considered non-Spanish. The Crown and the Church, once seemingly motivated by a genuine desire to spread the Christian faith, now became obsessed with what they called “pure” Christian blood.

In 1481, the Holy Office of the Spanish Inquisition was born. Its purpose? To ferret out heresy against the Catholic faith. (Heresy is defined as a practice, belief, or even an opinion that doesn't conform to orthodox teachings.) Its practice? To arrest, torture, and punish every Spanish Christian even suspected of such heresy. It seemed the converted Jews had fallen into a trap. Now that they were legally Christians, the Inquisition could try them for not being Christian
enough
.

“Edicts of Faith” encouraged people to accuse their friends, relatives, and neighbors of heresy. “
Familiaris
” were chosen from the populace and appointed to spy and report on their fellow citizens. “Transgressions” as simple as refusing to eat pork (a Jewish dietary restriction) could get a personâand especially a conversoâarrested. Thousands of people were burned at the stake at huge spectacles called
autos-da-fÃ©.
And the Office's judges did not usually require proof. Those who held grudges could denounce their enemies for offenses that may never have happened.

So far, Mudejar subjects had not suffered the same per-secutions, perhaps because there were powerful Muslim kingdoms to the south and east that might rush to the Spanish Muslims' defense. But the Inquisition, which confiscated the wealth of its prisoners, had made Castile rich. It could now afford to attack Muslim Granada, the third kingdom of the Spanish peninsula. It was the final piece of the puzzle in Isabella and Fernando's quest for a unified Christian Spain under their rule. The “Spain of the three cultures” was over. The war of the Holy Reconquest, as they called it, held the day.

A NOTE ABOUT SOME TERMS USED IN THIS BOOK

conversos:
A term used for Jews who converted to Christianity. They were also called
New Christians
and, sometimes,
Marranos,
which some historians think means “pigs” or “swine,” perhaps an ironic reference to the fact that Jews and, allegedly, many conversos, don't eat pork.

Moors:
This was the most common word used by the Spanish (and other Europeans) for people of the Muslim faith. It was often considered a derogatory term.

Moriscos:
A word meaning “Moorish,” which was used for Muslims who converted to Christianity.

Mudejar (plural, Mudejares):
This was the Spanish word for Muslims who were living under Christian rule.

Old Christians:
This term became more and more common as Spain became obsessed with “blood purity.” True “Old Christians” were said to have had no Jews in their family history. After the Inquisition was instituted in Spain, many jobs and societies required documents proving that a person's family had been Old Christian for at least seven generations.

A scribe does much more
than just copy words.

Take pride in your art.
Take care.
Take your time.

A good scribe is a pitcher.
A pitcher holds wine
and spills not a drop.

That is how scribes
must treat words they take in.
Look at them closely.
If you miss even one,
it is gone. Maybe for good.

You must also be careful
of what you pour out.
Your hand must be steady.
Avoid what will shake it.
Wine itselfâthat is one thing.
Chasing girls is another.

“And if the pitcher
develops a crack?” I ask.

“Then it's of no use,” says Papa.
“Don't worry. See here!”
Holds out a hand, slightly shaking.
“Sixty years old and never a tremor.”

I try to laugh with him.
But we both know his whole
blessed body's been shaky of late.

Papa pretends not to notice
my worry. His grip on my shoulder is steady.

“Above all, Ramon,
you must always be true.”

Cordoba.
It's been royal at least since the time
of the Romans. Even Hercules,
the great Greek, loved this city
of mine.

When the Moors conquered al-Andalus,
fair Cordoba, shut in by the Guadalquivir,
was the natural choice for their caliphate.
It became home to the head of all Muslimsâ
the caliph himself.

But the Moors were defeated a long time ago.
It has since been a jewel in the crowns
of our Christian kings. And now Isabella,
our gracious Queen, has arrived.
She's set up her court in the grand alcazar.
I can walk to its gates
in two thousand paces, plus thirty-three.

Amid all this glory, we Benvenistes
must eke out our days in the space
that was once used for servants.
Our stuffy rooms squat like beggars
deep in the heel of this house.

It's a fine house, you know:
as big as you'll see along this whole street.
But it's no longer ours.

When the Old Christians chased us
away from Cordoba, Papa said,
“There's no choice.”
He knew of a place called Gibraltar.
We sold our fine house and ran
for our lives.

When we returned,
the house was still standing.
We were luckyâ
few in our quarter still were.

But still standing, too,
was the man who had bought it.
He would not sell it backâ
certainly not for the pittance he'd paid.

But he does rent us out
these four little roomsâ
that's counting our shopâ
for a handsome price.
Should we, I wonder,
be thanking God
for our blessings?

During the riots
the whole of the city attacked
the New Christian quarter.
Hundreds of conversosâ
people like usâwere wiped
from the Earth.

El hombre anumérico by John Allen Paulos
Sleeping Handsome by Jean Haus
IT WAS ALL A DREAM (1) by JACKSON, KELVIN F
Journey Into Nyx by Jenna Helland
The Suburb Beyond the Stars by M. T. Anderson
The Transdyne Awakening by Chris Betts
Wand of the Witch by Arenson, Daniel
Last and First Contacts (Imaginings) by Baxter, Stephen
Twice the Talent by Belle Payton
You Mean I'm Not Lazy, Stupid or Crazy?!: The Classic Self-Help Book for Adults With Attention Deficit Disorder by Kate Kelly, Peggy Ramundo